The word “Baroque” springs to mind when trying to find an apt word to describe Modern British Sculpture at the Royal Academy. Not that this exhibition is theatrical or florid, but rather, Baroque in the sense of the word’s Portuguese origins: barroco, a misshapen pearl. The beautiful but flawed, the precious but imperfect.

Despite its title, Modern British Sculpture is emphatically not a comprehensive narrative of British sculpture in the 20th century, but rather it is an idiosyncratic exhibition that will astonish some and annoy others. Curated by the sculptor Keith Wilson and Director of Tate Britain Penelope Curtis, the stated aims of the exhibition are to address the problems, aspirations and confrontations that have taken place in British sculpture; to set up conversations between artworks, allowing for the identification of formal continuities; and to reconsider the reputations of specific artists and artworks. And as such the exhibition is incredibly successful in making audiences look again at familiar works and is equally interesting in its introduction of lesser-known artists into the history of British sculpture. However, there remains a niggle in the back of my mind which wonders to what extent will audiences be accepting of a partial and quirky narrative of British sculpture which leaves out some of the nation’s best known artists: Lynn Chadwick, Eduardo Paolozzi, Anish Kapoor and Rachel Whiteread amongst them.

The first object audiences are confronted with when entering the exhibition is a recreation of Edwin Lutyen’s Cenotaph (1919), on Whitehall. A stark and austere column, it towers over audiences, surrounded by large black and white photographs of Jacob Epstein’s series of human figures charting the cycle of life, for the British Medical Association, 1906–8, on Strand, London. Together this combination of replica and photographs sets a meditative and probing, tone for the exhibition to come. For while one might wonder, “where’s the sculpture?”, this is in fact the point. The curators are indicating the broad boundaries of what might be classified as sculpture, and questioning how we experience and remember three-dimensional objects. What follows is a sequence of rooms, in a broadly chronological order, each with their own distinct argument about the nature of sculpture.

The curators have identified a number of themes, ranging from artistic influences; sexuality; the authority of artists; functions; the public; and the everyday, which are addressed through the arrangement of artworks in conversation with each other. So for example, in the second room, titled Theft by Finding, sculpture from the early 20th century is displayed alongside non-western artefacts, sculptures and objects loaned from the British Museum and the Victoria & Albert Museum. The aim of this room is to demonstrate the impact of international visual culture on British artists, and formal comparisons between objects are actively encouraged. This is perhaps most obvious with the proximity of two of Eric Gill’s erotic, nude, women carvings alongside an Indian red sandstone female figure, Vrikshaka, a Jain female nature spirit. The overarching impression is that there is a universality of the human and animal form that traverses time and place; the ancient and the modern share common traits and aspirations. While this is fine on a visual level, I did have a problem with the lack of contextual information given about the non-western objects. While I’m sure that the curators were not supporting cultural colonialism, it did seem that the debates which surrounded the notorious Primitivism and Twentieth Century Art at the Museum of Modern Art, New York, in 1984, had been forgotten.1

Moving on however, the exhibition offers audiences an opportunity to view works that are either rarely on display, or which are so familiar that we just don’t look at them. A star of exhibition is Alfred Gilbert’s Jubilee Memorial to Queen Victoria (1887). Although examples of Gilbert’s public sculpture can be found in city centres across the country, it is rare that they are actually looked at by passing shoppers. But this work is a revelation in its detailing; Gilbert’s use of polychrome surfaces, jewels, texts and repeated motifs explain why this style of “New Sculpture” was so popular at the end of the 19th century, and makes us think again about the value of sculpture in the urban environment. Another revelation is Richard Hamilton and Victor Pasmore’s proto-installation, an exhibit, first shown in 1957. The work is an arrangement of perspex sheets suspended from the ceiling to create a maze of coloured squares in space. It’s a bit like walking through a Mondrian painting, and pinpoints one of the key themes in the exhibition: physicality and the relationship between the audience and the three-dimensional object. In a very acute way, the curators force us to think about not only how we look at sculpture, but how we physically engage with it.

Challenging expectations is another central feature of the exhibition; Anthony Caro’s Early One Morning (1962), an enormous pillar-box red, arrangement of long cylindrical tubes, i-beams and flat sheets of aluminium, is presented not as a radical shift in British sculpture as it is usually identified, but as a continuum and fusion of the concerns about flatness and roundness, plane and depth found in the work of Henry Moore and Barbara Hepworth. Similarly the inclusion of Damien Hirst’s Let’s eat outdoors Today (1990–91), reminds us that he actually is a fantastically interesting and thought-provoking artist, even if his recent work doesn’t reflect this.

This is an idiosyncratic exhibition, sometimes wilfully, sometimes playfully experimenting with juxtapositions. Subverting expectations and challenging audiences to see British sculpture as something other than just the figurative or abstract work of Moore and Hepworth was surely a difficult task to set oneself. But nonetheless, Wilson and Curtis have achieved their aim of thinking again about the nature of British sculpture, the problem is, some people will be disappointed with the results. On a visual and an intellectual level the show does make you work, all of which can be tiring, but in places it is worth the effort. So if it is difficult to get excited about the formal qualities of Julian Opie’s W of 1988, which is essentially a stainless steel cabinet with sliding glass doors, resuscitation can be found in the video slide show of Richard Wentworth’s photographic series, Making Do and Getting By; a selection of everyday encounters, 1970–85 (1985). Wentworth’s voice-over explains his aims and working practices of photographing everyday objects seen on the street. Ladders and their shadows, and buckets of various colours take on a curious beauty through Wentworth’s eyes.

A curious beauty, a misshapen pearl: Modern British Sculpture will, I have no doubt, be remembered as an alternative story of British sculpture, the one that challenged the status-quo, asked questions, and tested new ideas. I can’t remember ever seeing an exhibition with more daring; challenging, problematic and difficult yes, but some stand-out works make it worth a visit. 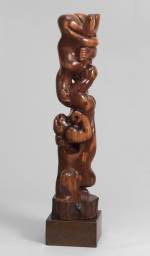 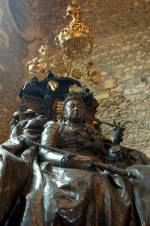 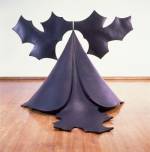 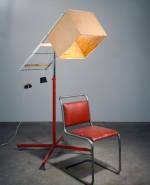