This retrospective is nicely paced to reflect the breadth and depth in Martin Puryear’s sculptures, which draw you in with their physical and aesthetic seductions, all the better to unsettle and undermine you with the slow reveal of their ambiguities 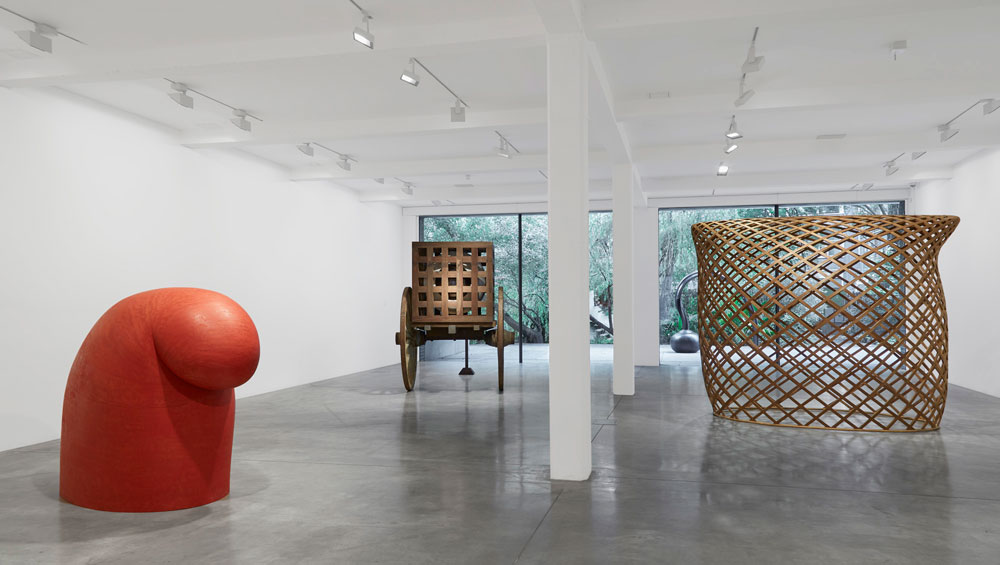 Rarely does an artist of Martin Puryear’s stature and experience land a decent retrospective in the UK without ever having exhibited here before, but Puryear’s show at the Parasol unit foundation for contemporary art goes some way to making up for his nearly five-decade absence from the London scene.

Puryear was born in 1941, in Washington. Since his first solo show in 1968, he has exhibited and been collected all over the world, from Madrid to Chicago, with numerous public commissions in Europe, Japan and the US. Writing in 2015, New York Times writer Jason Farago recalled seeing Puryear’s 2007 retrospective at New York’s Museum of Modern Art, and waxed lyrical over the “singular appeals” of the artist’s “mostly wooden sculpture: its enigmatic forms, its astounding craftsmanship, its humanistic spirit”. All of that mastery, mystery and humanism is present across four rooms in Parasol unit’s luxuriously austere, contemporary space. 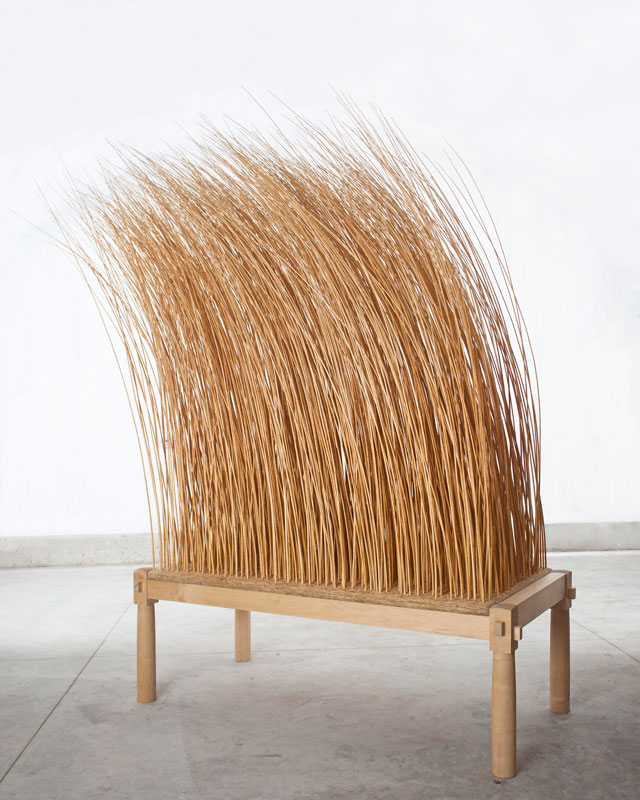 However, what strikes me most, on first acquaintance, is a delicious streak of comedy – the gentle humour that arises from years spent contemplating human nature at its knottiest – evident in the largest, free-standing sculptures exhibited on the gallery’s ground floor. Night Watch (2011) is a bristling blond carpet of willow twigs, swaying in some imaginary breeze as they rise from their prickly OSB (oriented strand board) bed. The visual references are richly layered: it is as pleasing as a transplanted segment of ripe field at harvest time, as fascinating in its precision and placement as a microscopic section of hairs on a human scalp, magnified 1,000 times. However, this piece is about insomnia, about the mental restlessness that is peculiar to long, wakeful nights. As a part-time insomniac, I recognise in these willow twigs the dense and numerous tendrils of anxious or surreal thoughts that emanate from an unquiet nocturnal mind; like spiky antennae of attention, protruding from the scalp in unexpected but compelling directions. Harnessed to the scratchy solidity of its wooden base, these elements combine to form a potent evocation of both jittery activity and stillness.

Big Phrygian (2010-14) seems a fat and happy thing, while representing anything but: its rotund, scarlet form sits plumply on the floor like some fallen Noddy hat, but the reference that inspired Puryear is the “freedom cap” worn in France and eastern Europe as a badge of the masses’ struggle for liberty. It is a motif that Puryear, an African-American supremely aware of the US’s ongoing history of racial inequality, returns to often. 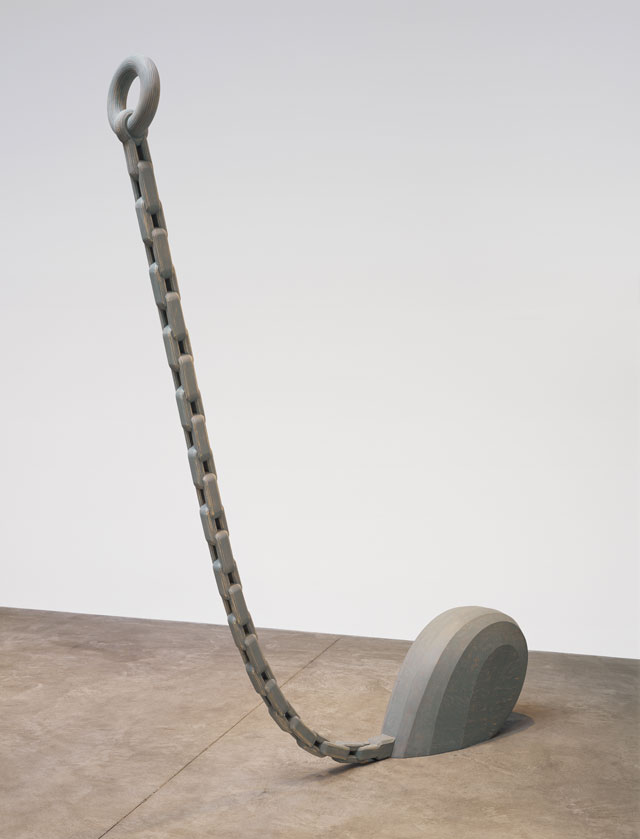 Le Prix (2005) takes the form of a wooden snail, its painted grey shell carved in smooth planes, its tentacles united in chain-link supplication or celebration, bearing at their apex the “prize” of the title: a dull, grey, timber ring. The sincere and ludicrous ambition embodied in this humble creature – is it chained to the object of its desires, or “liberated” through having seized it? - prod and probe with wit and bite at our notions of what is most treasured and why.

The work here is really nicely paced to reflect the breadth and depth in Puryear’s work. Curator Ziba Ardalan’s spacious arrangement gives each sculpture room to breathe, allowing viewers to immerse themselves in each work’s particular physical, emotional and philosophical aura. And the outdoor, canal-side terrace is a bonus location for his tall bronze work, Question (2013-14): a twisting, glossy, liquorice stem that arcs nearly eight feet (2.4m) up from the ground at one end, returning to earth under the weight of a luscious gourd - or conker-like form; the tension in its lines and curves contrasts beautifully with a nearby willow’s grace and weightlessness and the inky depths of the water. 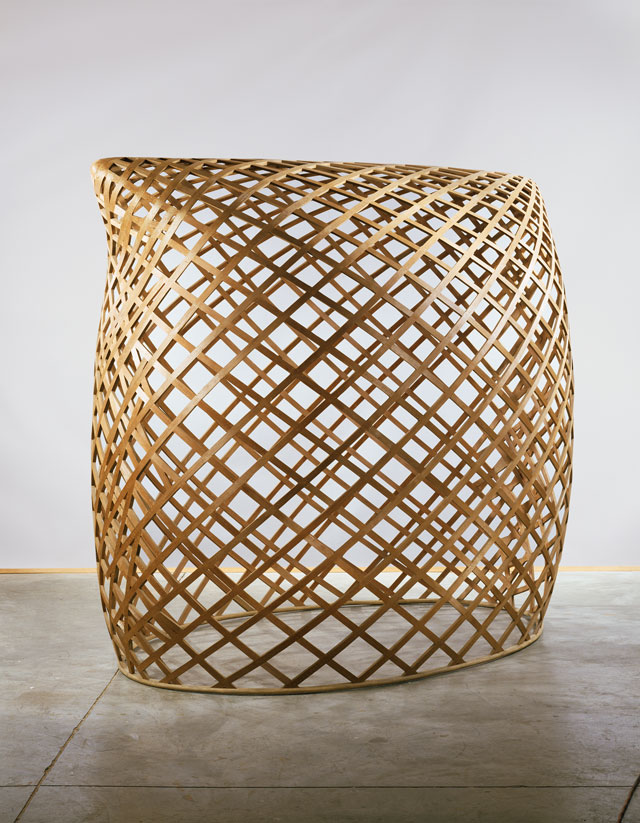 There is something fond, sensuous and also comical about Brunhilde (1998-2000): a billowing, bosomy structure made of woven cedar and rattan, it simultaneously suggests a voluptuous, corseted torso, battle armature and the plaited braids of a flaxen-haired warrior maiden, while its upturned edges hint at the horned helmets of Valkyrie. But while the sinuous lines of this convex structure convey strength and solidity, inside all is hollow. Puryear is skilled at drawing you in with his works’ physical and aesthetic seductions, all the better to unsettle and undermine you with the slow reveal of their ambiguities. It is an edgy but vitalising experience. 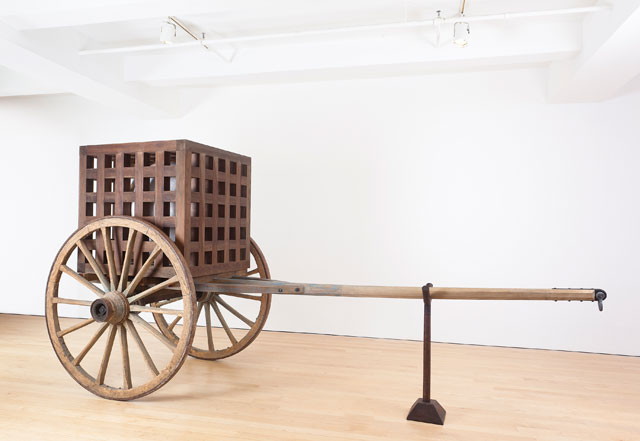 Nearby, The Load (2012) bears, as its name might suggest, a heavy burden, both symbolic and literal. Huge cartwheels – genuine historic artefacts, which Puryear found on a French roadside – attached to a simple wooden trailer, are a nod both to the kind of horse or ox-drawn cart that has transported goods and people for thousands of years, but also, more specifically, the tumbrels that conveyed prisoners to the guillotine during the French revolution. This cart carries a wooden, gridded cage, inside which sits a single glossy eyeball, facing backwards into the room. As you peer into its prison, the curved glass “eye” reveals your own image, trapping you in the cage with it. It is no accident that the gaze of history – hindsight? – is thus fixated on the past while the mechanism that moves it blunders blindly, relentlessly forward.

Puryear’s work is so plainly the fruit of intense and focused thought and craftsmanship; he famously makes almost every piece with his own hands. Perhaps this commitment to wood and to craft is what rendered him less interesting to the contemporary art scene of the late-20th century, given its obsession (so in tune with mainstream culture) with the conceptual, the disposable and the machine-made. But these works are so rich in thought, so pregnant with intentionality, and his unique aesthetic so evolved: a masterful manipulation of material and form to communicate their own particular, yet universal truths. One of the most haunting pieces is Untitled (1995): a large head-like form, made of steel mesh wrapped around a metal armature and dappled with a light coating of tar. There are no features to latch on to for some facile reading of character, just a dense crisscrossing of tiny lines clotted with tarry blotches; it gives this notional humanoid head a dark and vibrant presence, as if its neuronal pathways were suddenly rendered visible on its skin, instead of obscured beneath it.

On a lighter note, Happy Jack (1993/2011) sits stolidly in his own small white room, a “drunken sailor” whose inebriated state is conjured in the tight weave of his basketwork torso, the large cork rammed into his neck (the head is entirely absent – his mind clearly liberated from its earthly cares), and the invisible presence inside the torso of hundreds of corks taken from wine bottles consumed by Puryear and friends over decades. 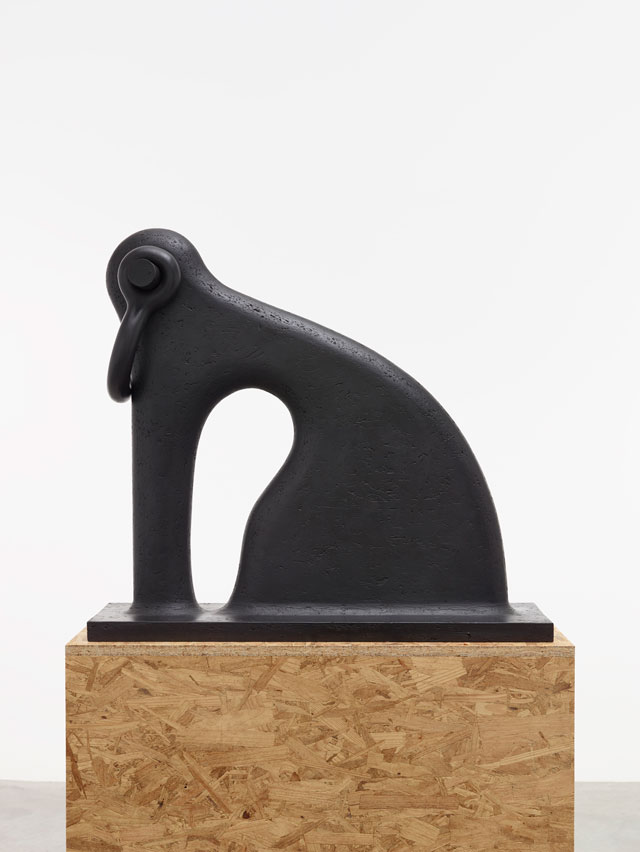 Upstairs on the first floor another room hosts Puryear’s wall sculptures and smaller pieces. Highlights among these are Shackled (2014), an elegiac elephant in blackened iron, its neck bowed under the weight of a large, black ring fastened to ear-posts, representing its tusks – the unique assets that have made of it a slave to man’s ambition.

Whether symbolic, representational or abstract, all of Puryear’s pieces, are compelling in their economy and eloquence of line and form. One of the most simple and yet articulate is Untitled (2015), a slim curl of cedar bark, it is gently looped at the left, and arcs up to suggest lightness and movement – a wave, perhaps - before it plummets down in a dead straight vertical to the floor, as if anchored by concrete.

Puryear came to sculpture circuitously, although he learned his skills with wood as a child via his father, a self-taught cabinetmaker. After completing a BA at Washington’s Catholic University, he signed up to the Peace Corps and travelled in Sierra Leone, documenting his experiences in woodcuts and prints. After that he studied printmaking at the Royal Swedish Academy of Fine Arts in Stockholm - where he encountered the Scandinavian take on modernism, which embraced and celebrated wood and craftsmanship; he returned to the US to study sculpture at Yale. However, he has always continued his print work alongside the sculpture. The last room in the show exhibits a selection of prints, woodcuts, etchings and aquatints, mostly from around 2000. Their motifs – of seeds and buds, vessels and lines reminiscent of the knots and grains within wood – reveal the close links between his two- and three-dimensional work, and the profound and original talent at work behind each. Although this retrospective is clearly massively overdue, it is certainly better late than never. 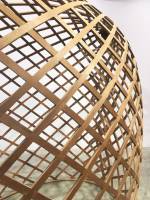 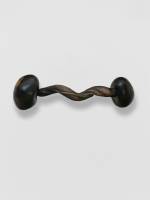