In this small but inspiring exhibition of work by Margaret Mellis, an unfairly overlooked member of the St Ives group, her joy of colour shines through, whether in her small collages, her later oil paintings or her driftwood constructions

This exhibition of work by Margaret Mellis (1914-2009) is the first institutional exhibition of her work in more than 10 years. Long overdue, the exhibition focuses on Mellis’s later driftwood constructions, but places them alongside collages and paintings from across the long course of her career. There is a lot to cover, and this relatively small exhibition does it beautifully.

Mellis began her artistic career in 1929 as a student at Edinburgh College of Art alongside William Gear (1915-97) and Wilhelmina Barns-Graham (1912-2004). As a recipient of the Andrew Grant Travelling Scholarship, in 1933 she travelled to Paris where, like many artists before her, she studied in the studio of André Lhote. After a relatively short period at the Euston Road School in London, and under the shadow of impending war, Mellis and her first husband, Adrian Stokes, moved to Carbis Bay, near St Ives in Cornwall in 1939. Ben Nicholson, Barbara Hepworth, Barns-Graham and Naum Gabo all followed the couple to Cornwall and soon the St Ives School, such a fundamental part of British modernism, grew and developed. The other artists became well-known, but Mellis’s achievements remained largely unsung. 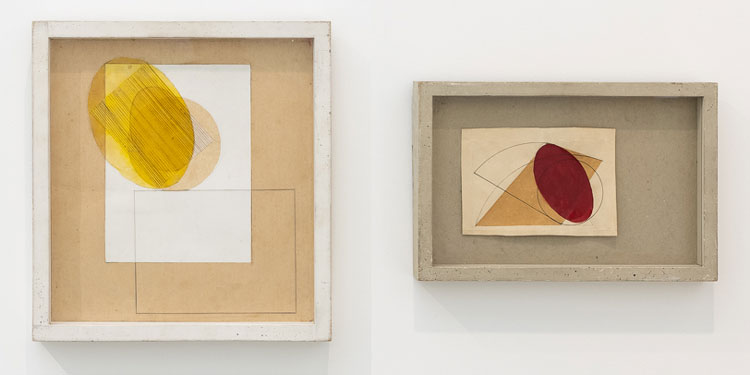 In her catalogue essay, Harriet Baker says: “Though in many ways Mellis’s constructions were startlingly new, they synthesised a life’s work, demonstrating her commitment to colour and her interest in precise and abstract forms. They also tunnelled into the past, linking early experiments with late ones, and one coastal landscape to another.” So, what exactly does Baker mean here? As this exhibition shows, Mellis’s early collages, such as Construction with Yellow Oval (1941) and Collage with Red Oval (1942) were exemplary of the well-known St Ives School style. 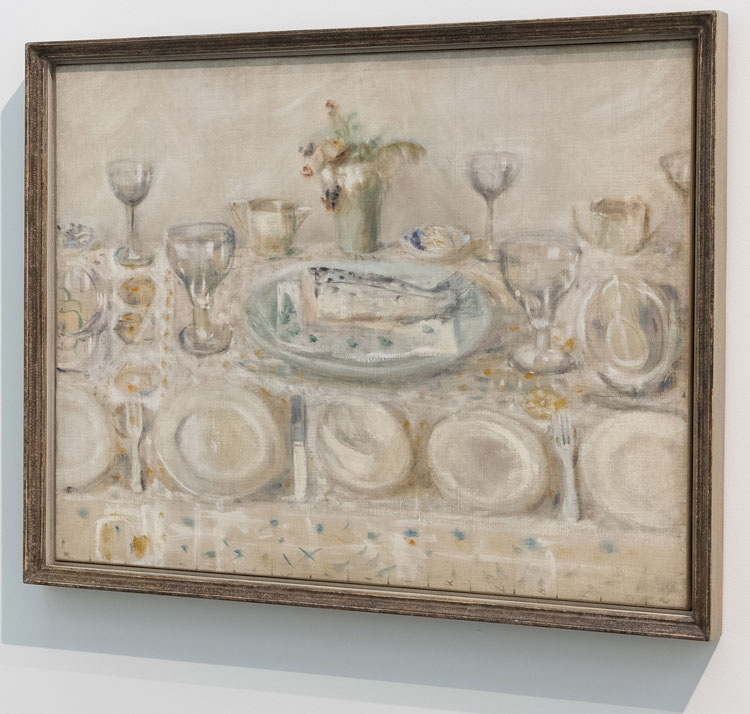 Mellis had just completed the large figurative painting Banquet (1939) – also in this exhibition – when Nicholson arrived and encouraged her to experiment with abstract collage. With the house so full of visitors – Nicholson, Hepworth and their triplets, William Coldstream and his young family for a time, too – it’s a miracle Mellis managed to make any work at all. The small scale of her collages and the household materials she often used would have made them a realistic prospect. Still, despite the playfulness of works such as Third Collage (1940) with its tiny, embedded crossword puzzle, their formal qualities were faultless and exemplary of St Ives modernism.

Mellis’s son, Telfer, was born in 1940 and she left St Ives in 1946 when her marriage to Stokes had ended. In 1948, she married the painter Francis Davison and they eventually settled by the Suffolk coast. This hiatus in her personal life also saw a change in her work. As she later recalled: “I couldn’t even go on with what I was doing, so I went right back to the beginning of where I left off representational painting. I started over again.” For this reason, we see the juxtaposition of these small early collages alongside oil paintings. Despite this shift in her practice, the exhibition is careful to identify a continuing theme, or themes, in her work. The most obvious theme is that of colour. From her earliest days in Edinburgh, under the guidance of Scottish colourist Samuel John Peploe, to her small collages in St Ives, her later oil paintings and then driftwood constructions, colour was central to Mellis’s making. We can see this clearly in the oil paintings shown in this exhibition. Self-Portrait in Yellow Dress (1950) and Girl and Flowers (Orange and Purple) (1959), both of which use colours in their titles, display a bold intensity of colour and mood. Still-life works from the 1950s, such as Still Life with Champagne and Tomatoes and White Wine Bottle and Candlestick, both c1952-53, use only black, white, red, yellow and green to create abstracted still-life works that attend to the relationship between colour and form. The other theme in the work is that of decay, as we see in the use of discarded household materials in her collages, the subject matter of her paintings such as the wilting flowers of Flowers: Black and White (1958), and, of course, the materials used in her driftwood constructions.

From the late 70s, Mellis began making constructions from driftwood found on the Suffolk shore. She had collected so much driftwood that it formed a pile in the corner of her studio. Worn down by time and tide, each piece was arranged and rearranged by Mellis to create her wonderfully evocative constructions. With an intuitive drive to simply create something that looked right, Mellis made these repeatedly until the 2000s. The examples in this exhibition range from c1979, through the 80s and 90s, to 2002. Some of these works are relatively small and intimate, as is the case in Eighteen (1980) the exquisite Twenty-six (1981), the latter just 35cm x 18cm (14in x 7in) in size. At the other end of the scale, the impressive F (1997) confronts the viewer with a full 146cm in each direction. In any case, these works, put together intuitively, point to Mellis’s resourcefulness and creative eye for the lost and discarded objects of this world.

In a screened-off area within the gallery, Mellis’s delicate envelope works are a revelation, at least to me. Working on the inside of used, opened out, envelopes, Mellis created works of such simplicity and tenderness. These pastel and crayon drawings of flowers, examples here from 1975 to 1999, are full of colour and joy as in Hollyhock, Marigold with Sage (c1990), for instance. Still, there is the poignant curve of a wilting poppy in Prue’s Poppies (1989) or the dying remnants of Dandelion Clocks (1987) and ideas of decay continue to permeate Mellis’s work. As in Mellis’s paintings, collages and constructions, these exquisite envelope drawings bring together her joy of colour alongside a fascination for decay, proving that both can be explored simultaneously and still create work that is uplifting.

The carefully considered composition of this exhibition tells so much of the story of Mellis’s art and life in a way that leaves the viewer feeling they have learned something new (I certainly did), but still wanting to know more, inspired to look again at her work and better understand its significance. That is what this exhibition at Towner does and is surely what all good exhibitions should do.