Two new exhibitions of Lynn Chadwick in London simply confirm the status and importance of one of Britain's finest sculptors, who died last year aged 88. The exhibition at Canary Wharf offers a rare opportunity to view Chadwick's marvellous Sixties pyramid and beast sculptures, a number of which have not been exhibited since the 1960s. Pyramidal and split pyramidal forms in coloured Formica on wood will be displayed together with a collection of his giant stainless steel beasts that were made at the end of his career. A complementary exhibition of bronzes opened on 3 November 2004 at the Osborne Samuel Gallery in Bruton Street.

Lynn Chadwick first trained and worked as an architectural draftsman and designer. He came to sculpture relatively late in life after serving as a pilot in the Second World War, yet he achieved major renown at the relatively young age of 41, by winning the International Prize for Sculpture at the 28th Venice Biennale in 1956. At first he experimented with mobiles and these were followed by what he called ‘balanced sculptures'; ponderous metal sculptures supported on thin legs, bristling and roughly finished. His knowledge of scale and sculptural form was inevitably informed by his experience in architecture and he became one of the new generation, post-Henry Moore, to come to prominence on an international stage.

Scale and engineering inform Chadwick's approach to sculpture as well as the final product, for he created his sculptures by construction rather than modelling, making a skeleton of welded rods onto which he laid his surface. Generic human and animal forms are recurring themes, often abstracted or reduced to basic geometric shapes. Other works are more recognisable. The stance or movement of a creature as well as its relationship to other forms creates intense relationships in his work, between the artist and sculpture, between the viewer and object.

Chadwick used mostly traditional materials but in the 'Pyramid' works he used Formica, the new, clean material that became popular in the 1950s and 1960s. They were exhibited at Marlborough Galleries in 1966 and the present exhibition at Canary Wharf is the first time they have been shown since then. The Pyramids are different to Chadwick's other work, with sharp edges and marvellous colours, in contrast to bronze and natural wood. To see them almost 50 years later is a great experience; the colours have faded to some degree, the red is now softer rose and the blues and greens more delicate. When in 1968 Chadwick developed the Pyramid theme in the Quattordicesima Triennale di Milano, which he made in situ there in tough cardboard, the organisers wrote:

All Chadwick's proposals are presented in a form of plastic art. The section takes the form of a display of large sculptures for extensive areas which are designed to play their part in the design of the new metropolis. The sculptures assembled here are of an elementary nature, and strictly in the form of geometrical figures which appear to represent fantastic animals or shapes of bodies in space. There are 13 solid pyramid shaped objects of varying dimension, the sides of which are painted in different colours.

Chadwick also made Pyramid sculptures in bronze. He made 'Beast' sculptures from the 1950s. The 'Beast' sculptures at Canary Wharf date from 1990, and are made from welded steel. From different angles they appear to be different works, yet each angle provides an interiority and monumentality. The scale is impressive and their presence commanding.

Chadwick's connection with the acclaimed public art programme at Canary Wharf dates back to 1999, when his bronze 'Couple on Seat' was installed as part of the exhibition 'The Shape of the Century: 100 Years of Sculpture in Britain'. By courtesy of the artist's estate it remains there on permanent loan. The Canary Wharf Group has a dedicated public art programme which has to date included a wide range of contemporary artists. 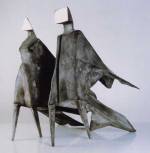 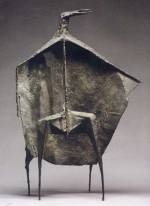