Artist Liu Wei explores the themes of architecture and urbanism in Density, his new exhibition at White Cube Mason’s Yard. The title “Density” is evocative of the appearance of the works, which are, in conventional terms, architecturally shaped, and constructed with mathematical precision. In the upper gallery, his works bridge a gap between 2D and 3D pieces, with steel sculptures hung like canvases on the wall. This space is in contrast to the lower gallery, which presents a warmer environment, where corners are curved and colours muted.

Density also refers to Liu’s interest in issues of urbanism, and his work serves to open up a discussion about the future of our architectural environment. He explains that this is an exhibition less about “viewing” and more about “thinking”. Liu, who grew up in Beijing in the 70s, is of a generation of Chinese who have witnessed drastic urban change that continues at an increasing pace. He still lives in Beijing and creates work as a response to his city environment. His approach to material, shape and form reproduces for the visitor the confrontational nature of structural verticality, where buildings become ever taller. A wider debate is addressed on how these environments affect our day-to-day lives, and how other forms of density come about as a consequence. Population density increases as more people become concentrated in a smaller area of the city, waste multiplies, and property prices soar to extortionate rates, which in turn creates social division.

Urbanism is a theme that Liu has explored in the past. In previous works, he has used salvaged wooden door frames, panelling and acrylic board: materials that could, with the right tools, be used to construct a building. Exhibited at White Cube in 2012, Merely A Mistake II No 1 (2009-12) is a kaleidoscopic assortment of structures that borrows spires and buttresses from the western Gothic architectural tradition. Another clear architectural reference can be seen in the sculpture Untitled (2011). The work resembles an organically sprawling city; built up on a plinth existing as an island in the gallery. The city is diagonally tilted, swirling in the elements and the chaos of humanity.

Liu’s current show is a continuation of this visual urban reference and the artist uses similarly architectural materials. Chaos, however, is now under control; Liu’s response to the environment is now less disorderly and more measured. The works show clearcut shapes and an interest in mathematical measurements, straight lines and balanced forms. In the upper gallery, Density No 7-9, 11, 13 and 14 (2013) are individual monolithic sculptural pieces. Constructed of mild and galvanised steel, they hang on the walls and their presence is heavy and looming, like scaffolding or the facades of buildings in a flat-packed city. Liu uses the examples of billboards, ventilation pipes and temporary shelters, all structures that make up the fabric of the city. Different arrangements of silver and dark brown steel resemble neat industrial forms; railway tracks, a computer motherboard or the innards of a machine. Steel is the sole material in this room that affects the atmosphere. It is repressive and permanent, referencing the architectural present and the horizon of our future cities. Compared with previous works, the works on show are just as monumental, yet more sombre and serious. Through recreating an atmosphere of urban domination, Liu pitches a response as to how architectural and art practice could solve the topical dilemmas of density.

In the lower gallery, a polar atmosphere is dictated by the artist; Liu groups works with soft edges, materials and colours. Six sculptural forms of various 3D shapes, Density 1-6 (2013), fill the gallery’s central space. Formed with tiny oblong bricks made from the pages of books that have been reduced to pulp, these works are balanced and welcoming. As with the pages of a conventional book, the colours are neutral, like porridge, and the effect is warming and textural. In the past, Liu’s use of “books” as a material, seen for example in the chaotic sculptural city of Untitled (2011), has been compared with the dangerous destabilising potential of “knowledge”. In this exhibition, the use of books in combination with the measured and balanced forms refers to the use of knowledge for learning, understanding, careful planning and, consequently, an urban solution.

Although these works are not made from traditional building materials, close parallels can be drawn with the architectural process. Liu compares the forms to “basic digits”, where the shapes are calculated to exact proportions; as in the fabrication of a building, where geometry must be correct to the closest degree in order to function correctly. Another architectural quality is that the formation of the Density sculptures, positioned side by side and grouped together, provide a natural habitat for people. At the opening of the exhibition, people gathered around the edges and weaved closely in between the forms, breathing in the calming woody smell. Liu presents the positive features of urban arrangements, which controlled by material, shape and colour, can affect human attitude and emotion.

Four works from Liu’s Jungle (2013) series of canvases occupy the walls surrounding the Density blocks. Canvas is taken literally and used as a constructive sculptural material rather than a base, as the artist looks to “open up a new space” through these pieces in a utilitarian way. The works resemble flattened cutouts to be stitched and assembled, but they are skewed and stretched. The soft material echoes and absorbs the pulped pages of the Density sculptures and, again, offers a contrast to the heavy materials of the upstairs room. These works offer an alternative material that can be used to construct a lived environment.

At the centre of the urbanising whirlpool of Beijing, Liu prompts a calm consideration of the hectic architectural zone. The exhibition is a thoughtful offering of work that begins an exploration, provokes a debate and presents an example of an abstract, yet meaningful, solution to the urban condition. 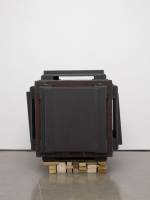