For many people, viewing Extremist Art: Expression of the Death Penalty, a gathering of some 300 paintings displayed at the Tomonotsu Museum – an art brut space opened in 2012 in a port district warehouse – will be a troubling experience. Knowing that prison inmates sentenced to death or already executed created the works adds a weighty mental and emotional context to the art that is not easily cast off when one leaves the building.

Currently in Japan, more than 100 inmates, male and female, have been sentenced to death. In Japan’s legal system, capital punishment is applied to people convicted of murder or treason. Those who have received the death penalty can expect to be held in a detention centre for five to 10 years, depending on the number of appeals that are made. But some condemned prisoners have been in detention centres for decades, and none are told in advance when or where his or her death – by hanging – will occur. Prisoners are informed on the morning of an execution.

The works were commissioned by the Sachiko Daidoji Foundation, founded in 2005 to lobby against the death penalty. Sachiko Daidoji’s son, Masashi Daidoji, was condemned to death in 1987. After visiting Masashi in prison and observing many court trials, Sachiko met with other condemned prisoners. She believes that their situations suggest the possibility of false accusation, a concern of all who speak out against capital punishment.

Prisoners were instructed to work freely on paintings and other forms of personal expression that could be shown to people outside the penal system. While many of the prisoners focused on being falsely accused, the death penalty, and the harsh environment and treatment in detention centres, others explored a quest for redemption, referred to memories of the past, or broached the meaning of life.

A universal plea written in English appears at a far edge of the paper: “Abolish the Death Penalty.” Viewers can ponder why this prisoner relegated his cry for human justice to the periphery while featuring issues of a daily nature for Japanese people more centrally.

Masumi Hayashi’s Nation and Murder looks like an Abstract Expressionist composition of red and white. But some parts look like blood, rather than paint, dripping down the surface. Of course, the image of blood is difficult to avoid if one knows that the artist was charged with lacing a curry with poisonous arsenic in 1998 and serving the dish to her neighbours. This incident is so famous, widely reported nationwide on TV, radio and in newspapers, that everyone in the country knows her name and the crime.

Much lighter in tone, Sabutaro Mannen’s manga-style Story in Prison humorously describes a prisoner’s day in a detention centre. Except for meals and baths, typically inmates are alone in their cells. They have ample time to make art but few means to do so, yet the lack of oil paints and watercolours does not seem to have been a barrier to creativity. Using pen and/or coloured pencils only, they were able to compose complex, emotionally charged images for this show.

Nobumasa Kushino, curator of the exhibition and art director for the museum, says: “Some prisoners’ diaries reveal they want to use their hands and devote their minds to making art. Many of their creations are time consuming and minutely done. [As in] art therapy, prisoners may be expressing their uncontrollable horror and anguish.”

Psychological and artistic evolution over time is demonstrated through prisoner Yasutoshi Matsuda’s body of work, made during the six years prior to his 2012 execution. His Blowfish on cutting board (2007) portrays poisonous fish, which might be waiting to be eaten. How the artist relates to the fish – Is he also waiting to be eaten? – and how he rendered them without a model – prisoners must necessarily resort to the imagination – are just two of many questions raised by the painting.

Although viewers are aware that the prisoners are condemned to death for serious crimes, they are not given the specifics of these crimes. Kushino explains: “That is because the exhibition does not aim to open a discussion about the pros and cons of the death penalty. There is something powerful and disturbing [about these works]. By putting on this show, my intention was to look at inmates’ expressions from a purely artistic point of view. I wanted to know what other people will think and [how they will] react by looking at them.”

Because they do not know when the executioner will come for them, the only “freedom” condemned prisoners have is a choice of a last meal. Thus, visitors can assume some urgent motivation behind the paintings they will see. In effect, these works were a way for the artists to break through their limitations and voice their despair more completely. Judging from the popularity of the show, which has been extended from an original closing date in June, these breakthroughs are convincing and, perhaps, affective of complacent lives not bound by prison walls and a ticking clock. 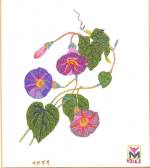 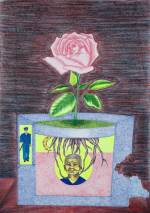 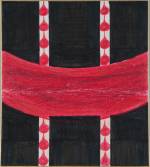