Li Songsong: We Have Betrayed the Revolution

Li Songsong: We Have Betrayed the Revolution

Li Songsong’s paintings are imposing, strong and abstract, yet they are also images of group portraits, social activities and political scenes. He takes his subject matter from photographs in the media, looking back over the past century of Chinese history. I met Li at Pace London gallery and he told me a little bit more about the works.

Li’s technique and process is primary to his subject matter. Addressing his paintings in the gallery, each piece seems so abstracted and fragmented that genre can be ignored for a while. The earthy and cool colour selections of blues, greens, browns and pinks are refined further by dashes of white and an underlying presence of black. This scheme unites the pieces in the exhibition, creating a distinctly meditative mood. The palette is reminiscent of the sombre tones of the French Realists, such as Gustave Courbet and Jean-François Millet, artists who were hugely influential in China in the mid-20th century, the same era to which Li refers through the subject matter of many of his works. Li, however, assures me that he selects colours almost subconsciously, depending on his mood. Walking through the gallery, the shades echo across the space, recreating those moods and reflecting the artist’s feelings on to the viewer. Big Girls (2013) is a beach scene of a group of women in bathing suits. Divided by panels on the canvas, each segment suggests a new mood of the artist through colour. The leisure activity of bathing is complicated by this juxtaposition of sections, which resemble a fragmented timeline of Li’s creation. The image is no longer a straightforward scene, but a psychological study of the artist.

Panels of painted aluminium create abstract frames within his works, which Li paints separately, only bringing them together at the last moment of creation to form a genre painting. Each panel is an individual piece of abstract painting. Li explains that it is not a traditional way of working, where the final image is continually envisioned. Rather, while painting each piece, he forgets about the whole image. Considering Li takes much of his subject matter from photographs found in newspapers and on the internet, we can compare his process to the digital snap of a camera, capturing a scene in a moment. He says that, initially, it was working with aluminium’s shiny surface that drew him to it, but then he realised that using it was liberating. He finds that he can distance himself from the original image; the story behind it, the context and the characters. When I ask whether he would consider exhibiting these images individually in a permanent deconstruction of the whole, he replies that, maybe, this would be a good idea. He has already considered deconstructing The One (2012), a large-scale sculpture made of 91 individual aluminium parts that was installed at Pace Beijing for his 2012 show. Li explains that, although different in shape and size, The One is very much like his other works in terms of concept and technique.

Along with the aluminium, the paint itself is sculptural. It is thick, layered and textural. In Guests Are All Welcomed (2013), a businessman sits with his legs crossed in a restrained and corporate pose. The artist uses the paintbrush to carve deeply into the image. The subject’s eyes are gouged and his outline is dark. In June (2012) the large canvas is thickly textured and pockmarked. The scene of figures is distorted by brief moments of yellow, orange and peach, marking peaks of light, yet an underlying darkness emerges from the layers beneath. An outstretched hand is visible, but texture takes over and it is unclear who is giving and receiving. Faces are made abstract by angular corners as one identity is divided by several components. In It’s a Pity You Aren’t Interested in Anything Else (2013), a famous Calvin Klein model occupies the tall canvas. The painting revives an advertising campaign for the brand that was prevalent in China, and is an acknowledgement of the influx of western trends entering the country through luxury fashion labels. Changing the medium from photograph to painting adds new dimensions to the expression of the image. The model’s body is separated into 15 pieces by frames of colour on the canvas. His figure stands out from a background that is rigidly combed in vertical and horizontal lines, neat and conforming. In Lu Xun Was Dead (2012), one face, which occupies the whole canvas, is divided into five panels. One panel is spring green with sprouting flicks of colour, whereas another is subdued, blurred by grey.

Li maintains that painting is an old-fashioned way of representing reality, where there are so many other ways and mediums of viewing life. Although this may be the case, his paintings are powerful in their depictions of individuals, representing the multiple layers of the human. Li agrees that, even subconsciously, he must be a humanist. Portraits, group portraits and scenes of people sitting and talking are prevalent in this exhibition and are the images to which he finds himself drawn.

Although for Li his work is not about the subject matter, he cannot escape questions about the recognisably political scenes he uses. In Small Reunions (2013), three people gather around an open casket, a reference to the famous open casket of Mao. The painting is divided vertically into three panels developing in colour, suggesting phases of development. In We Have Betrayed the Revolution (2012), two figures sit at a table. They lean in, looking directly at each other, performing the political ritual of bargaining. A deep black line, seemingly part of the background, dominates the composition near the head of one of the figures. A Play (2011) shows figures sitting around a table. From the construction of the painting over two canvases, a deep and central division can be recognised. Their faces emerge from various distances, sometimes hard to read, as if history has erased and distorted the past. The image has been worn down by repeated interpretation. Li liberates these loaded scenes by changing their process of creation.

He tells me about his recent visit to the National Gallery, explaining that the historical and religious subjects of the paintings are not important to him and it is the way the artist works with his materials – the paint, canvas and colour – that really affects him. Their significance is their track of humanity, which is left as a trail by these works. The significant nature of Li’s work is in his surface detail, the aluminium panels, the layering and the encrusting of paint. It is a return to the properties of paint and material and perhaps it is impossible to represent reality through anything but abstraction. 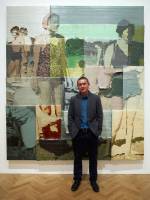 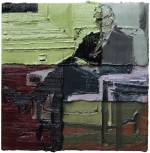 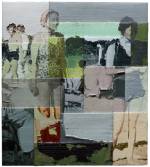 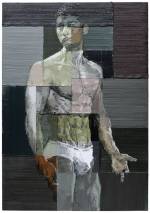