Li Huasheng: ‘A line is nothing. When I paint a vase, its outline does not exist, it is imagined’

Li Huasheng: ‘A line is nothing. When I paint a vase, its outline does not exist, it is imagined’

The Chinese artist is admired for his abstract ink paintings. Here, he explains how a visit to the US changed his art and his life, and why he has ‘stopped communicating with most people’ 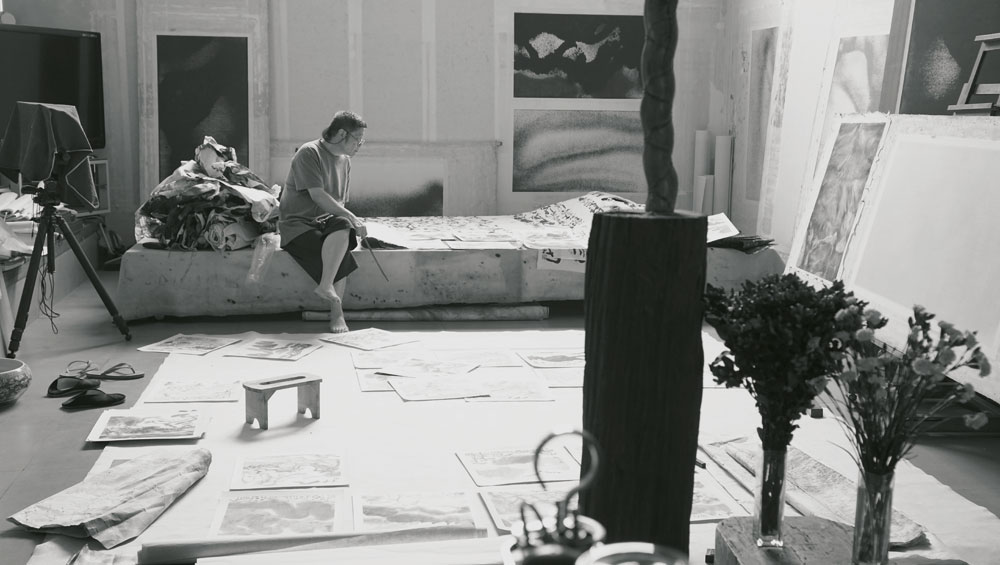 Li Huasheng (b1944 in Yibin, Sichuan) is a Chinese artist widely admired for his abstract ink paintings on paper. Like many artists of his generation, he was trained as both a social realist and a traditional Chinese painter and calligrapher, soon becoming a master of innovative and sought after shanshui (mountain/water) landscapes. But his art and life changed radically in 1987 when he visited the United States on a five-month official tour.

For the first time, he was exposed to the actuality of western art, both historical and contemporary, and the impact was enormous, causing him to rethink the entirety of his philosophical and aesthetic premises. He went into almost complete seclusion for the next 10 years (and continues to guard his privacy today), making very little work during that period. It was then that another transformation occurred, as Li began to explore Tibet, where he travelled with increasing frequency.

One day, as he watched lines of Tibetan monks advancing toward a temple and chanting the mantra Om Mani Padme Hum, he experienced a revelation. The lines of monks transfigured into symbols of time and existence for him, and the flow of lines he later inscribed based on them stood for personal time, representing his own existence. The line became his essential mode of expression, beginning in the late 1990s, and its appearance on the paper reflected his state of being at the time of execution, physically, mentally, spiritually, a manifestation of his qi (life force).

Li’s point of view seems similar in orientation to that of Agnes Martin, say, although he believes art should be pure, and eastern and western cultures, evolving separately, are utterly different. Line, nonetheless, is of vital importance to both artists and “everything,” says Li, should be “invested into it”. His transition into abstraction was gradual, completed by around 1997, his works now consisting of fine intersecting lines brushed by hand in an utterly controlled, repetitive gesture that derives from meditation. The resulting grids were inspired by architecture and patterns in nature, pared down to fundamentals and his calligraphy has also been drastically simplified.

He had an exhibition of recent abstractions at the Mayor Gallery in London in June and July. Li is collected internationally, and his work is in many museums and institutions, among them the National Art Museum of China, Beijing; the British Museum, London; the Metropolitan Museum of Art, New York; the Chicago Art Institute; the Art Museum, Shanghai; the Guangdong Museum of Art; Harvard University, Yale University and the University of Michigan. The following is an excerpt from an edited interview with Li Huasheng.

Lilly Wei: What were your first ambitions?

Li Huasheng: My earliest ambition was to become an actor in Sichuanese opera, but my parents did not approve, so I turned to painting. My first painting teacher was Yu Jiwu (b1925), a graduate of the Hangzhou National Art School (now China Academy of Art) who had studied with Lin Fengmian. Yu taught me sketching and introduced me to oil painting. I later made many sketches in oil of the scenery along the Yangtze River. When I was 15, I exhibited some life sketches in pencil in the Sichuanese opera house. Yu arranged this. Later, I became a student of Zeng Youshi and studied calligraphy and seal-carving with him. Zeng was a collector of painting and calligraphy and showed me many Qing dynasty works, which greatly expanded my horizons. After the onset of the Cultural Revolution, I secretly copied the works of Bada Shanren (1626-1705). Later, I was sent to Hubei to do “reform labor”. I was very busy in the daytime but painted at night, in secret.

LW: You made an official, five-month visit to the United States in 1987 that you said had a profound impact on your artistic and personal life. Could you tell me in what ways?

LH: I truly realised my ignorance after my trip to the United States. I visited many museums while there, looking at both classical and contemporary art. There were many works I didn’t understand, but they gave me a profound overall impression: that art can take so many forms, especially contemporary art, and that every artist’s work is unique. When I looked back at Chinese paintings, they seemed essentially similar to each other. After returning to China, I became more self-reflective and dissatisfied with my own art. I thought, I must paint something nobody has ever painted before.

LW: Did any international artists influence you?

LH: I admire the Japanese calligrapher Yuichi Inoue (1916-85) and the American abstract painter Mark Rothko (1903-70). Their influence was more spiritual and intellectual than technical. For example, Inoue once said that he splashed ink directly on the faces of mainstream calligraphers. He was a lone wolf. His rebellion against tradition especially touched me. Only artists who can abandon their own baggage and the baggage of their traditions can become successful.

LW: What caused you to go into seclusion for nearly a decade?

LH: China has a long tradition of seclusion. It is really about an attitude of not conforming to the mainstream. Also, artistic creation occurs independently. It is not done in groups and schools. That’s why I’ve stopped communicating with most people.

LW: Tibet has also inspired you. How often do you go there, and where do you usually go?

LH: This is hard to say. I've been to Lhasa, but now I mostly go to the areas of Sichuan Province that are culturally Tibetan. I can drive to those places myself. Last year, I drove to Sêrtar County, Garzê Tibetan Autonomous Prefecture, and visited the Larung Gar Buddhist Academy there.

LW: Would you talk a little about your work?

LH: I use ink, brush and paper; they are the tools of my work. They are difficult to master and I will never give them up. Working with them is arduous, like the turning of prayer beads and prayer wheels. The heart needs to be restrained. You must control yourself. Desire needs to be restrained. Then your faith is secure. Lacking faith is unacceptable. With this faith, you pursue your intent endlessly, without distraction. Then you become tranquil, at peace with yourself.

LW: When you were asked what pain is, you said it was an enormous sheet of blank paper before you.

LH: Yes, and it is vast and open like the desert, and this tiny person must walk across it. He must live on until he finishes walking across it.

LW: Would you discuss the Chinese concept of kong, of nothingness, emptiness?

LH: Chinese artists start with nothingness. A line is nothing. When I paint a vase, its outline does not exist, it is imagined. It is important to transcend reality. Reality is not to be loved. You must do something very pure. Looking at my painting, what feeling does it give? Emptiness, nothingness. But there is something there and that is the viewer’s mind.  Does looking at my paintings change something for the viewer? This is something he has to attain on his own.