There have been some carping comments in British art magazines, such as 'The Museum of Modern Art (MoMA) isn't what it used to be'. But the fact is, a major transformation is in place, and activity at MoMA Queens is a viable, temporary contemporary-like substitute until 53rd St is back — in 2005. MoMA QNS is situated in a restored Swingline Stapler factory in Long Island City, Queens, close to the contemporary art centre P.S.1., and designed by architect Michael Maltzan. There is some replication of the spatial problems of Tate Modern, writ small.

In the summer, Peter Reed, a Curator with a very safe pair of hands, organised 'Autobodies: speed, sport, transport' through 16 September. Here a World War II pristine Jeep rubbed front wings with such masterpieces from the permanent collection as a 1963 Jaguar E-type, a 1959 VW Beetle, and a 1990 Ferrari Formula 1 Racing Model. 'A Walk through Astoria: Other Places in Queens: Photographs by Rudy Burckhardt' ran through 4 November, and gave an essential perspective overview for first visitors to Queens (of whom there are many). Glenn Lowry, MoMA's current Director, is interested in deploying MoMA Queens in continuing the 'mission' of present-day positioning and repositioning art and artists - of the past and of today - in their mutual relationships. This is an intellectually viable and honourable standpoint, but also somewhat 'high-risk'. How successfully this can be done remains to be seen, but only by posterity, and after current curators have usually moved on to the great art gallery in the skies - or wherever.

There is a strong representation of video art in the current December P.S.1 line-up. 'Video Acts: Single Channel works from the Collections of Pamela and Richard Kramlich and New Art Trust' runs through January 2003. British artist Steve McQueen's cool, soundless projected film entitled 'Just Above My Head' is exemplary, as is the environmentally more raucous 'Phat Free ' (1988) by David Hammons and the transformation of Linda Carter into Wonder Woman in 'Technology /Transfer' (l978-79) by Dara Birnbaum.

Also currently running is 'Building Structures'. An architectural presentation by international artists whose names are becoming better known - such figures as Francis Cape, Nathan Carter, Wade Guyton, Rachel Harrison, Chris Hanson, Hendrika Sonnenberg, Ian Kiaer, Ross Knight, Rita McBride, Patrick Meagher, Manfred Pernice, John Powers, Karlis Rekevics, Lara Schnitger and Shirley Tse. It will be interesting to see, in two decades if not one, how many of these aspirants can be re-rated by the museum then, and how many fall by the wayside.

This tension of survival is ever present in the more rhetorical project presentations. The artists use techniques available to architects and the process in some respects parodies the common usage of contemporary architects themselves in a subtle double take. The range of work exhibited is remarkable, from Francis Cape's quotations in wood of memory, history and surface materiality: the sculptures replicate cabinets and closets being finely finished with numerous coats of monochromatic paint. There is an illusion here of function too, when hinges are fastened to the cabinets, which are then sealed closed.

Nathan Carter's work 'Crash Bang Boom, We Land Direct at the Barbican' (2002), by contrast seems to mock the arrogance of postwar modernism where imminent dynamic movement gets frozen tragically in time, incorporating the nostalgia of children's toys.

Rachel Harrison's mixed media constructions engage both photographic and digital imagery within sculptured frameworks. She uses impoverished building materials to achieve this, such as Styrofoam and plywood. New York-based artist Patrick Meagher's installation is entitled 'that other modern world' (2000): this cross references architecture and modern social structures, by means of a whole series of individual sculptures which are made from expanded bead-Styrofoam. Iconographic components of varying scale purvey a feeling of shifting space. There is some reminiscence of the felts of Joseph Beuys, and the artist presents EPS aggregate foam as being the quintessential modern material.

In his 'personal decade (2002), Meagher provides a triptych of drawn work, referencing past bodies of the work by means of a series of imaginary annual icons. Fellow New York artist John Powers focuses on modernism's tendency to self-replicate endlessly by constructing sculptures with a single repeated module: wooden blocks are cut to various sizes yet maintaining always the basic underlying proportion of one by two by three. The work entitled 'Key' (2000) has three blocks balanced on point, while all the blocks meet at right angles. He articulates the volumes, but never actually subverts what remains a compositional whole.

The Berlin-based artist Manfred Pernice draws upon the seemingly banal architectural structures that proliferate across our contemporary landscape. He transfers basic architectural forms as such into sculpture, using inexpensive building materials such as untreated wood, while also attaching such ephemera as cuttings from journals and photo reproductions to the actual surfaces of the works.

The American painter Al Held's monumental paintings are composed of lozenges, rectangles, squares and stripes, which through tiled checkerboards and sliding scales, seem to leave the surface of every form virtually engaged. Obviously Held has suffered from the previous lack of space large enough to reveal the true impact of his work. Such a space as P.S.1 can offer helps to resolve the problem. The paintings also appear digital, but the process of work begins traditionally with drawing, signs of which process are then finally erased.

Paintings by Al Held and Arnold Mesches take advantage of the substantial spaces on offer in the Galleries. Mesches has one large painting in his FBI Files exhibition, otherwise made up of collages which are taken to represent oppression and even criminal activity that masqueraded as legitimacy in the Depression, or in World War II, the Cold War, and most especially perhaps in the McCarthy era. All of Mesches' works appear as colourful tapestries from a distance but when you take a closer look, you find yourself hit and frozen in horror that freedom itself was snatched from innocent individuals and groups, by America's own 'crusaders' in their form of patriotism. Mesches' exhibition was organised by P.S.1's Associate Curator Daniel Marzona.

The admixture of works in various media already shown at MoMA QNS and P.S.1. as above, combined with a valid questioning of modernism's sacred cows, characterises throughout the building this kind of deliberate, yet effectively provocative work. Of its internationalism there can be little doubt. But how insulated still is the selection, and the preoccupation of the majority of artists shown, from the cybernetic revolution which is sweeping through all forms of visual media today. Anyone for a cyborg? 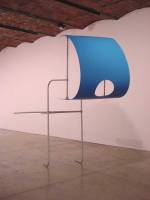 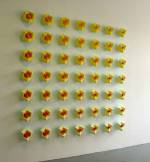