Using a selection of major works from their permanent collection as well as more than 250 other drawings, models and photographs, the Pompidou puts timely spotlight on La Tendenza this summer, the Italian architectural movement of the sixties, seventies and eighties. This established itself as a major international presence rather ahead of postmodernism in Britain and the USA. It arose as a reaction to doctrinaire modernism.

Spearheaded by the architect Aldo Rossi,1 the movement arose in reaction to the burgeoning Modernism of post-war Italy, and was characterised by a reactionary vigour and debate about the future of architecture in Italian cities and elsewhere. Tendenza means “trend” – a kind of stylistical progress that criticised the idea of the avant-garde as impossible and unrealistic. Thus the movement rejected utopia, those distant, abstract dreams as they saw them, and instead favoured a political and critical architecture with a firm grip on reality.

Indeed, La Tendenza, which prefigured Post-Modernism in architecture and more generally, established an interesting growing capsule: a debate that really went far beyond Italy in the sixties. The conflict – between traditionalist values and modern abstraction and idealism – is of course in a sense a “conversazione” that is age-old. Alberti, Vasari, and Palladio in Italy would all have born witness not to mention Bernini and indeed Borromini, almost half a century ago. These newer architects of the l970s debated the comforting, sprawling “reality” of history versus the utopian minimalism of Modernism in the same cities that have accommodated various Apollonian-Dionysian brawls. In l981, pitching in from America, Rosalind Krauss was to pronounce “the historical period that the avant-garde shared with modernism is over”.2

Yet perhaps what is so endearing about this particular movement is its neatness. The debates were first fought out in the journals: Domus, l’ Architettura, Controspazio and Urbanistica –and were argued about within the confines of a small network of architects and academics – with all the vigour, but thankfully fewer knives, less bloodshed (we imagine) than those old mafia families. There is something enjoyably intimate about the debate, the movement, and the pictures and models that recount it. The quality of critique engendered too was outstanding, epitomised by the historian Manfredo Tafuri (l935-l994).3

The high profile of the exhibition, in fact, is raised by the numerous architectural drawings, which at first sight bear the charm of fairytale illustrations, and the style of Futurist sketches. Of course they are not really meant to resemble fairytales or Futurism at all, being ideologically opposed to “fantasy”. Even Teatro del Mondo (Venice l979) by Aldo Rossi (illustrated) was about floating “frammenti” of historical reality. Social reality was enshrined superbly and creatively ten years earlier, in Milan with the extensive Housing Scheme built for the Quartier Gallaratese (l969-70).

And yet there is obviously a cross-over between so-called “traditionalist values” and fantasy. La Tendenza looked into the past, and defended it against Modernism, but its gaze was rose-tinted (and often gold-tinted, too). The Italian climate may also have had an effect.

So it is interesting to see this subtle war of fantasies, especially because there are so many cross-overs and similarities between supposedly conflicting styles. This historic realism seems unwittingly to be another kind of utopia. Perhaps the sketches are also misleading. Despite the idealised illustrations, there was nevertheless, at the heart of this movement, a commitment to a new realism: this also related to the neo-realism of Italian cinema of that time, as typified by the beautiful films of Michelangelo Antonioni such as L’Avventura (l960) and The Red Desert (l964) including the enigmatic but beautiful persona of the star Monica Vitti. Both combined a strong focus on environment and social alienation, mysteriously conveyed. As more brazenly did films by Federico Fellini. Such media emphasised and influenced engagement with accelerated urban and social development, and revolutionary social architectural programmes. By contrast Postmodernism, which followed later in Britain and America, was seen to abandon any such social prescription, without premise or principle.

Maybe it in is the nature of architectural drawings: no matter about the realism that anchors the design, the drawings will always be idealistic, since they resemble ideas at the very first stage of realisation. Certainly the exhibition reveals this shared idealism of the drawing board, where something supposedly representing realism looks like a stage set for a ballet. But it also, in models and recognising the critical context, does a very good job of showing the politics of design at work, and so a way of understanding how the eventual buildings can become so far removed from those original sketches. La Tendenza is an education in the politics of art and its production, and of that conflict between realism and idealism – both between movements and, as in La Tendenza, within it. 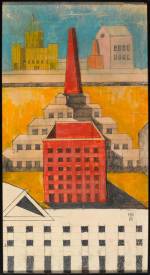 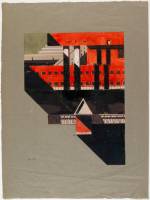 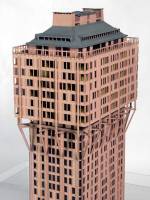 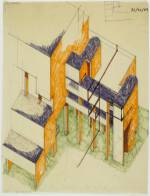