Kiki Smith: I am a Wanderer

Kiki Smith: I am a Wanderer

From the dreamlike worlds of her colossal tapestries to her printmaking and the photographs in which she records her own sculptures, this show reveals the multiple threads that weave in and out of her rich, multidisciplinary practice 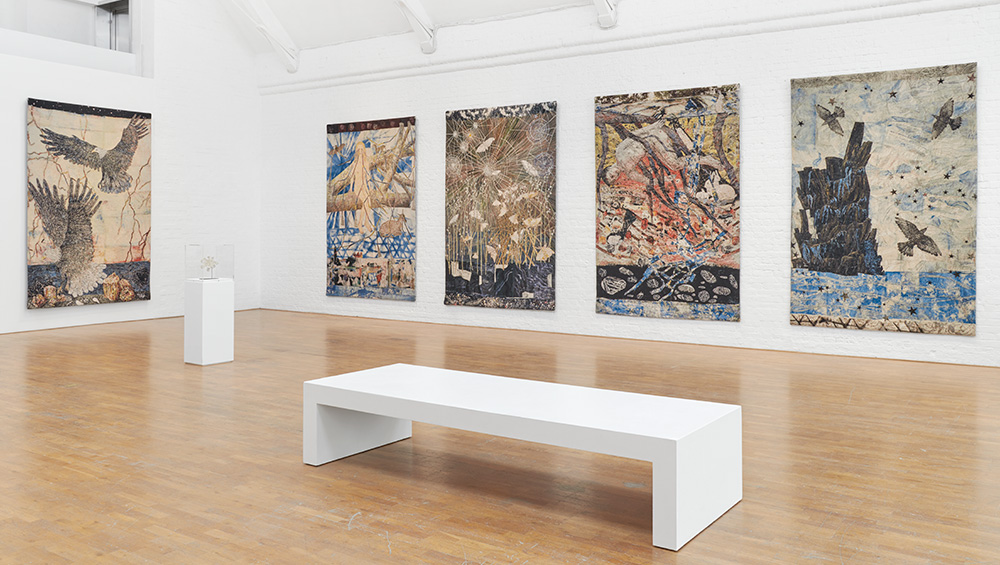 In an apparently calamitous scene, an apprehensive young girl wades through a sea of water followed by a horde of birds, monkeys and assorted fleeing animals. In the context of Kiki Smith’s recent work, it is tempting to associate this etching, Pool of Tears II (2000), with concerns over climate instability. While the American artist welcomes subjective readings, the roots of this particular image lie in Lewis Carroll’s manuscript drawings for Alice’s Adventures in Wonderland (1865), in which the shrunken protagonist swims through a puddle of her own tears. Vulnerable figures, whether human or animal, real or imagined, have been a mainstay of Smith’s art since the 1980s. This is especially evident in her confrontational sculptures exploring the female body, for which she is best known. In this compact exhibition at Modern Art Oxford, however, curator Petra Giloy-Hirtz shines a spotlight on several lesser-known aspects of Smith’s work, revealing the multiple threads that weave in and out of her rich, multidisciplinary practice. 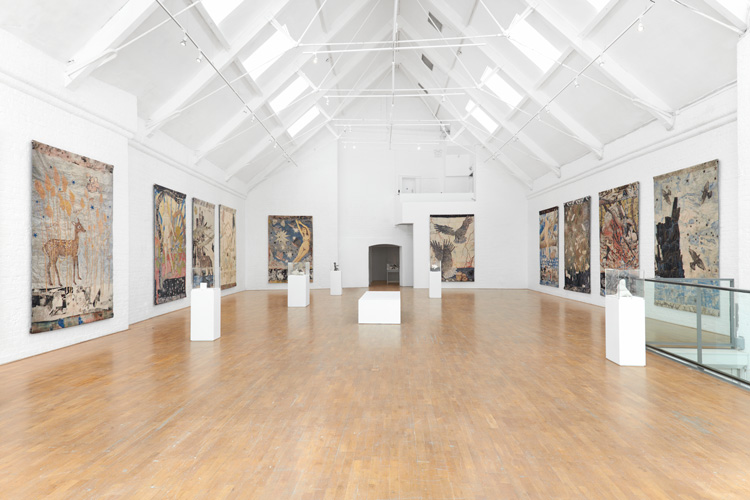 A selection of 12 colossal tapestries open the show, filling the airy gallery with dreamlike worlds. These three-metre-high compositions combine personal mythology with imagery inspired by rural New York State; woodland creatures, birds and human figures populate their finely woven surfaces, evoking myths, legends and folklore. But, tinged with apocalyptic overtones, the mysterious scenes also convey anxieties over ecological fragility and environmental breakdown. The artist cites as an influence the famous medieval Apocalypse tapestry series in Angers, France, which illustrates the final confrontation between good and evil as described in the biblical book of Revelation. Smith, of course, is not so literal; hers is an art of intimation, and her concerns are ecological rather than theological. Nevertheless, the naked woman being slowly enveloped by a snake in Earth (2012) is clearly an allusion to Eve’s temptation in the Garden of Eden and the moment that paradise on Earth was lost.

Other tapestries suggest the interconnectedness of the natural world. Congregation (2014), for example, shows another naked woman sitting on a fallen tree; a deer rests at her feet while owls perch on a nearby branch and a squirrel scurries along another. Thin, stem-like forms protruding from their eyes coalesce into a strange, web-like structure that connects them all together. In Underground (2012), the relationship between humanity and the natural world takes a darker turn; a naked man appears trapped underground, held captive by tree roots as indifferent rabbits dig their burrow close to his feet. In Spinners (2014), which is absent of people, spiders’ webs appear amid spindly clumps of pussy willow covered with silk moths. The intricate details, intense colours and complex textures of these textiles is testament to the remarkable precision of the hi-tech jacquard loom that Smith uses to translate her original 1:1 scale paper collages into thread.

The notion of transferring imagery across media is explored further by a selection of untitled photographs in which Smith records and interrogates her own sculptures. Oblique angles, uncertain details and awkward cropping abound here. In one, a decapitated body spread out on the floor approximates a murder scene. In fact, the image shows Smith’s Ice Man (1995), as the life-sized human figure – inspired by the 1991 discovery of a Neolithic man frozen in the Alps – lay on her studio floor awaiting completion. Elsewhere, Untitled (Crow Feet) (1995) shows a pair of wax talons relating to the sculptural installation Jersey Crows (1995), for which she cast more than a dozen bronze crows as a memorial to birds poisoned by pesticide.

Such works, in addition to providing insights into the production of Smith’s major sculptures, are a reminder that much of her practice is collaborative and involves working closely with skilled craftspeople at foundries, glassworks and print shops. This is especially true of her multiple-edition small sculptures, a selection of which are shown in a large vitrine. As if fallen from fairytales, the objects in this wunderkammer of curiosities have a fantastical quality; included among the many fragmentary and provisional objects are an egg yolk made from glass, a 24-carat gold shell, a porcelain light catcher and a bronze octopus tentacle.

Printmaking has been integral to Smith’s practice since the 80s and often provides starting points for her sculptures. In 1990, her collaboration with the prestigious print shop Universal Limited Art Editions resulted in the etching Hair, a wild tangle of black lines and marks created from imprints and photocopies of her own flowing locks. It hangs in the final room, which is crammed with etchings, lithographs, aquatints and linocuts produced over a 30-year period. There is no chronology here and certainly no attempt at thematic display, but that, one senses, is just how Smith prefers things. Animals, plants and the human form occur throughout the generous selection, which includes Ginzer (2000), the touching depiction of her dead cat. Nearby is Two (2002), an intimate double portrait of a sleeping male friend, and a series of six delicate etchings showing wilted and decaying flowers titled Touch (2006). Smith’s own body appears in several prints, including the experimental self-portrait My Blue Lake (1995), which was created using a camera designed for geological surveys; the unsettling 360-degree image flattens the artist’s skin like a two-dimensional map of the globe. 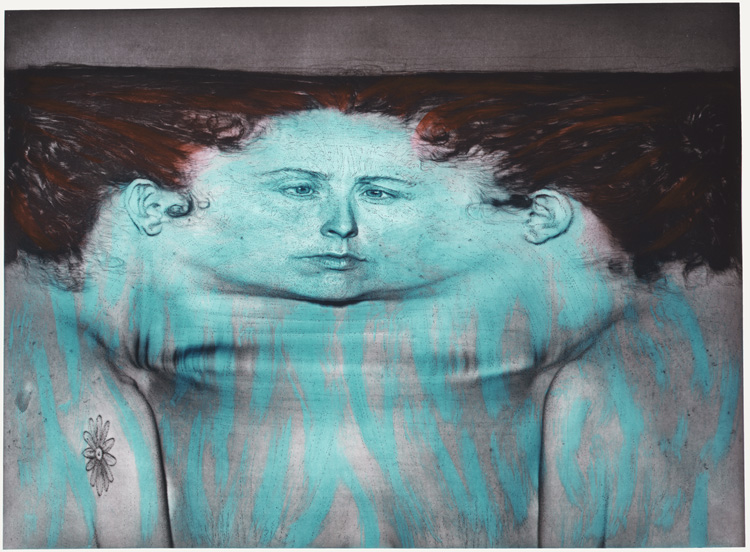 The profusion of prints in this room recalls Smith’s 2003 exhibition Prints, Books, and Things, at the Museum of Modern Art, New York. That show grouped her works thematically, under headings such as “anatomy”, “self-portraiture”, “nature” and “feminine contexts” (death and decay was curiously absent from the list). While there is no denying the presence of these themes, such divisions seem artificial; Smith’s approach is far more freeform and discursive. In Oxford, the motley display reflects this well. It also underscores Smith’s dubious insistence that her works do not stand for or represent anything. But if the artist’s prints, tapestries and sculptures can be said to express something, it is a sincere celebration of life itself. Even in her most sombre moments, the spectre of mortality serves as a reminder that life is fragile, vulnerable and should never be taken for granted. 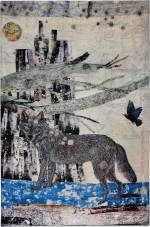 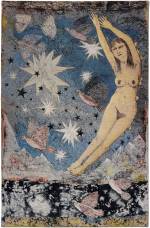