Brätsch is an artist who works in the afterlife of modern painting, upending its history and mythology with Rabelaisian glee – and her latest exhibition is no exception 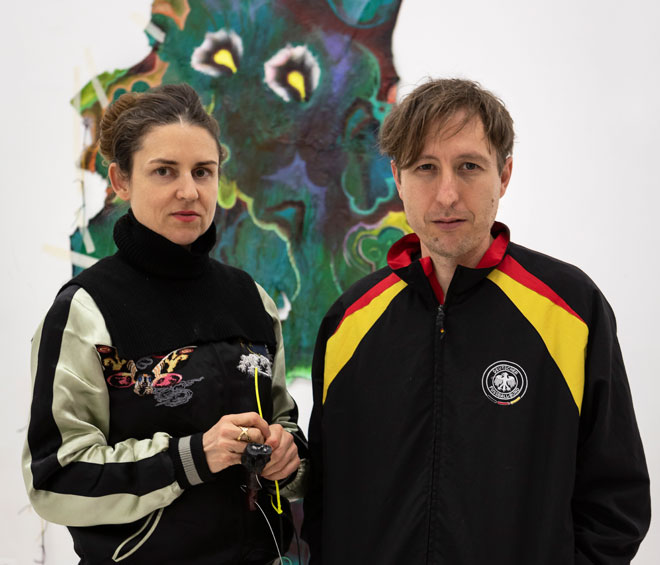 On a stormy spring evening in Rome, I arrive at Fondazione Memmo, a palazzo-turned-contemporary art museum a short stroll from the verdant, neo-classical grandeur of the Villa Borghese gardens. I am early for the opening of German-born, New-York based painter Kerstin Brätsch’s exhibition, Kerstin Brätsch_Ruine / Kaya_Kovo, which means that, for the best part of an hour, I am pretty much alone in the galleries. Alone, except that is for the faces that appear in almost everything the 39-year-old makes, haunting her compositions with the contrariness of poltergeists. 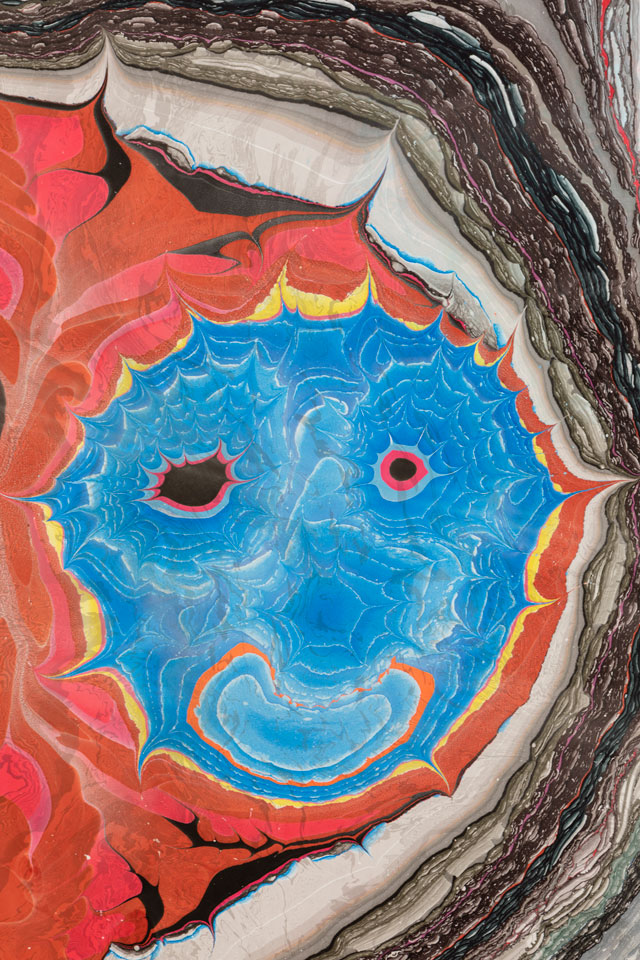 Having shaken the rain from my umbrella, I immerse myself in the extraordinary spectacle of Unstable Talismanic Rendering_Psychopompo (2017). Nine large sheets of intricately marbled paper, it fill the walls of a small room, and looks like the imaginings of an abstract expressionist locked in an antique book shop with a couple of tabs of acid for sustenance. Each sheet is framed by fluorescent lights, the entire display offset by a vaulted ceiling painted a rich, bright shade of blue. Dumb as emojis, the faces pool in the marbling ink, irreverent in the splendour of the display. 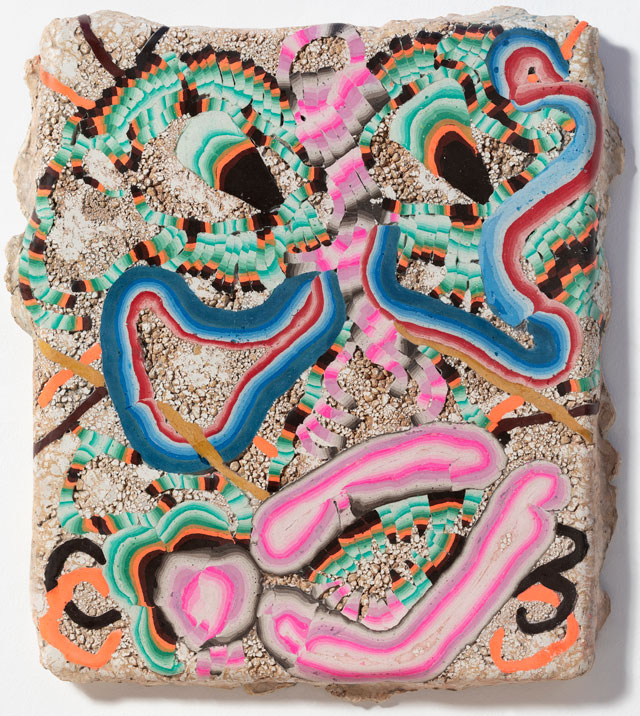 In Fondazione Memmo’s largest gallery, Brätsch has coated the wall of windows that look out on to the cobbled courtyard with a pink film. During a break in the rain, the glass catches the last of the evening’s light, bathing the room in a synthetic rosy hue. Here again I find those faces, this time in Psychic Fossil_Stucco Marmo (2018), a wildly colourful series of 20 differently sized stucco marmo works hung sporadically on the walls. The stucco marmo technique of using plaster to recreate the effect of stone was imported from Bavaria to Italy in the 17th century as a cheaper alternative to marble. Today, it is a highly coveted art form in its own right – a Renaissance-era simulacra – but these works are nothing like any stucco marmo I have ever seen before. Instead of imitation marble veins, I see purple tongues, curling noses and eyes like polished agates. They stare out over the gallery like the pantheon of an absurd, lost civilisation. 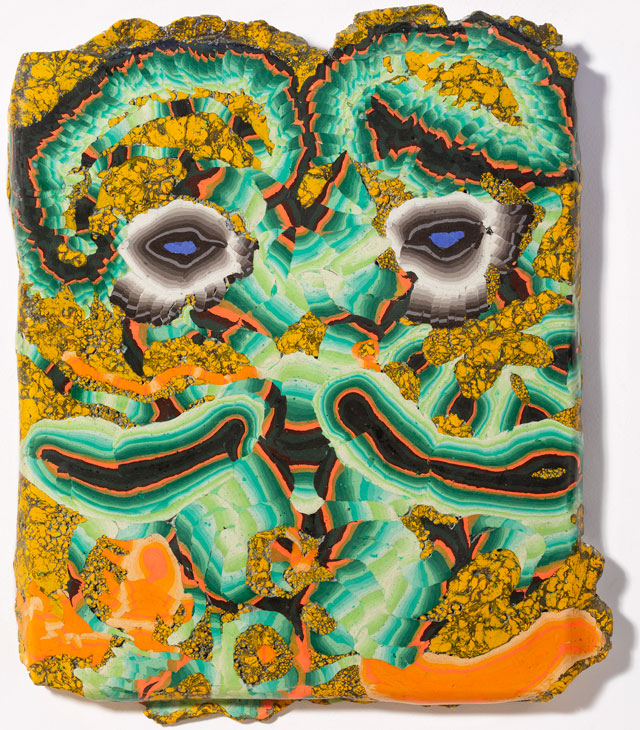 
Surrounded by Brätsch’s tripped-out hybrids of painting, craft and sculpture, I am reminded of the Russian philosopher Mikhail Bakhtin and his theory of the carnival, as read through the work of the French Renaissance writer François Rabelais. For Bakhtin, the carnival is a time of coming together where the usual rules that govern and divide are thrown by the wayside: a nobleman may dance with an artisan, and insobriety and iconoclasm are celebrated rather than punished. Brätsch is an artist who works in the afterlife of modern painting, upending its history and mythology with Rabelaisian glee. Visitors arriving at this show with expectations as to what painting looks like – or how it behaves – should prepare to have them burlesqued. 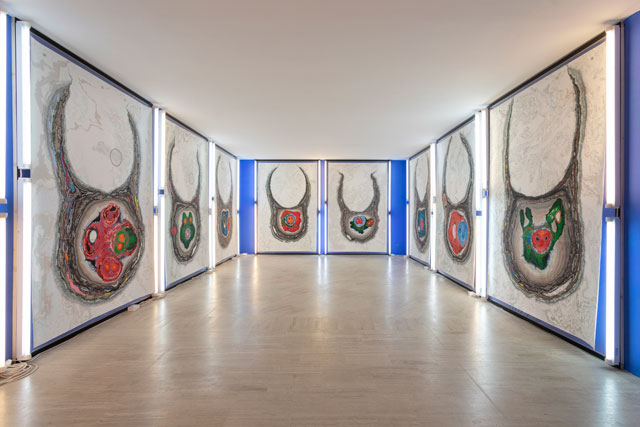 First of all, for an artist frequently listed as among the most significant painters of her generation, she often doesn’t paint. A case in point: the far corner of the larger gallery, where the majority of the Fossil Psychic_Stucco Marmo works are hung, is partitioned off with temporary walls constructed from lengths of wood and plastic sheeting. The effect is somewhere between a make-shift studio and a cordoned off-area for an archaeological dig. Inside are two wooden trays containing numerous pieces of wiggly plaster, which Brätsch refers to as Brushtrokes Fossils (2018). Painting, the dead medium, is perennially dug back up and on show in the museum. 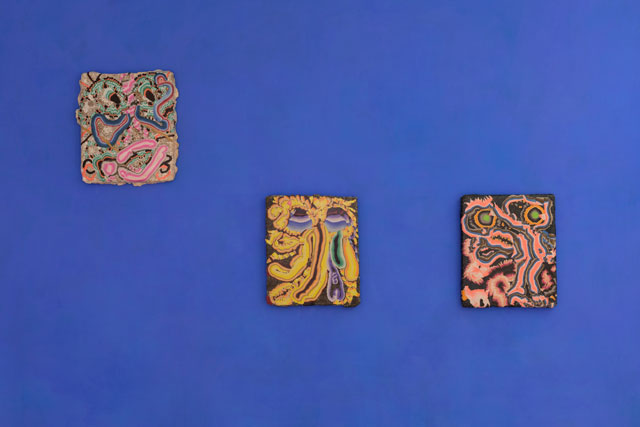 Second, she rarely works alone, preferring to collaborate with artisans, fellow artists and former students – a poke in the eye for the fetishisation of individual authorship that dominated 20th- century painting, and the hierarchy that divides fine and applied arts. Unstable Talismanic Rendering_Psychopompo was made with the help of a German marbling expert named Dirk Lange, and Psychic Fossil_Stucco Marmo with that of an Italian artisan named Walter Cipriani. A smaller gallery across the courtyard is dedicated to the work of KAYA, her collaborative practice with the artist Debo Eilers, with whom she is studio neighbours in New York. 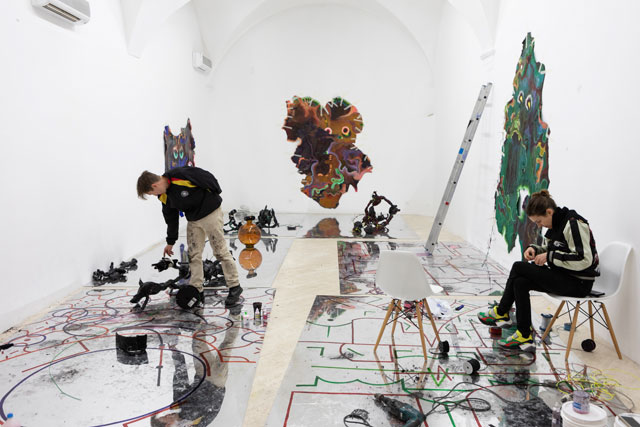 “The task of an artist and my interest as a human being is to build relationships,” Brätsch said on receiving the prestigious Edvard Munch Art Award in 2017. When, eventually, the crowd arrived at Fondazione Memmo on the opening night, they spoke to the sincerity of this ambition. Among those in attendance were Cipriani, Eilers, the artists Viola Relle and Raphael Wellguni, who studied under Brätsch at the Academy of Fine Arts in Munich and who continue to work with her today, the painter Allison Katz (another long-term collaborator), and the musician Nicolas An Xedro, who produced a soundtrack of buzzing cicadas and other atmospheric noises that accompanies KAYA’s display. 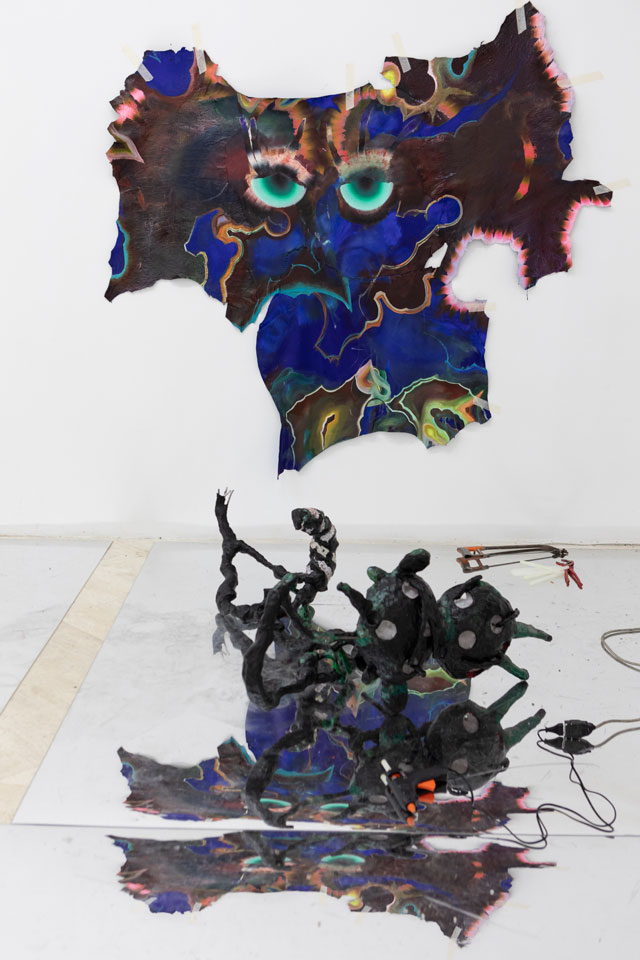 “The carnival spirit,” Bakhtin wrote, “frees human consciousness, thought and imagination for new potentialities.” Nowhere is this spirit more explicitly expressed than in the work of KAYA. In the run-up to the exhibition, Brätsch and Eilers used one of the foundation’s galleries as a temporary studio, working on sheets of mirror laid out across the floor. In here, the atmosphere is pure festival, the room filled with the sorts of objects you might expect to find decorating a stall selling punk boots, poppers and magic mushrooms. The mirrored sheets are displayed on the floors and walls, caked in the remnants of paint and other materials used during production – a theatrically self-conscious nod to action-painting – and the room is divided by N. O. Madski Wall (2017), a curtain of stitched and studded leather. Three painted leather hides – KAYA Pelle/ Taste di calcio, KAYA Pelle/ David, and KAYA Pelle/ Pinocchio (all 2018) – are fixed to the walls with metal stakes, ornamented with tangled plaster forms inset with studded belts and tourist trinkets bought from shops in the vicinity of Fondazione Memmo: a collection of wooden Pinocchio toys, some DayGlo statuettes of Michelangelo’s David, and the heads of plastic dolls of famous football players. And then, of course, there are those faces. Stand back from any individual work and they appear, smiling, teasing, confounding. 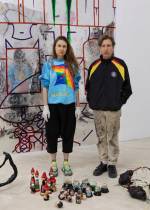 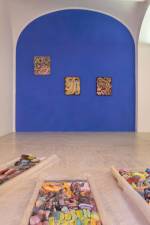 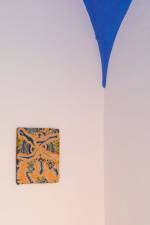