Ken Done – interview: ‘We white blokes could learn from collaboration in Aboriginal art’

Ken Done – interview: ‘We white blokes could learn from collaboration in Aboriginal art’

Now 80, Done says you should be fearless as you age and take more risks. Here he talks about why a good work is like a long-term relationship, collaborating on art with his grandchildren – and swimming with sharks

The art of Ken Done is well known in Australia and, through his design company, Done Art and Design, all over the world. For many years, the art world in Australia struggled to accept that an artist with such brilliant success in the world of design and applied arts could be taken seriously in the art world proper. Now his signature works of Sydney Harbour and of coral reefs, flowers and the outback are immediately recognisable and, in Japan, he has been a household name for decades. In recognition of his distinctive oeuvre, Thames and Hudson, Australia, has published a set of four books, Reef, Beach, Outback and Sydney (2019), and is working towards a definitive book on the artist’s career in painting and design. The exhibition Ken Done: Paintings You Probably Haven’t Seen, 2000-2017 opened in 2019 and was due to be on show at select regional galleries in Queensland, NSW and Victoria until 2022. 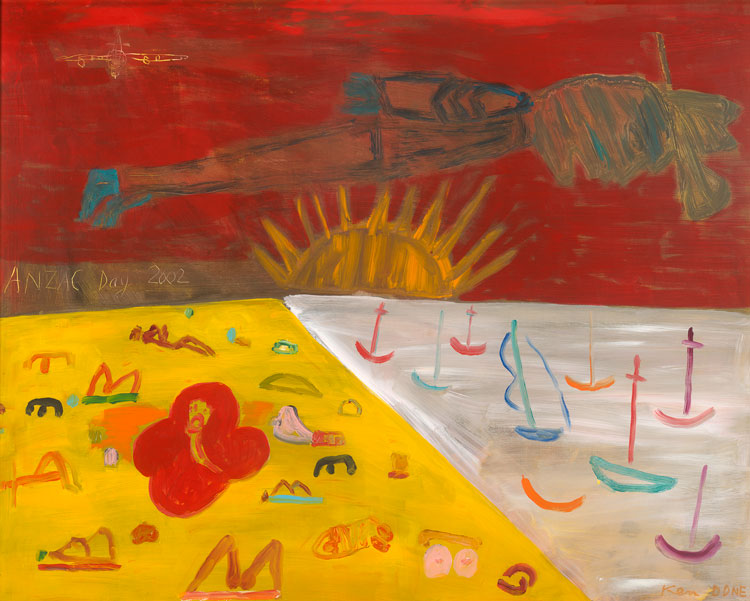 As an inveterate traveller, Done has captured the unique beauty of many parts of the globe that are under threat in environmental and cultural terms, and as a painter of abstract images inspired by the natural world, he has made an important contribution to art in Australia. Following the unprecedented summer of bushfires in Australia, I was keen to talk to him about the role of the artist in times of extreme threat in ecological terms. I had to cancel my planned trip to Australia and, self-isolating because of the Covid-19 pandemic, I traded beach and studio interviews for Skype. Done’s current exhibition in Sydney can be viewed online at kendone.com.au/art.php. 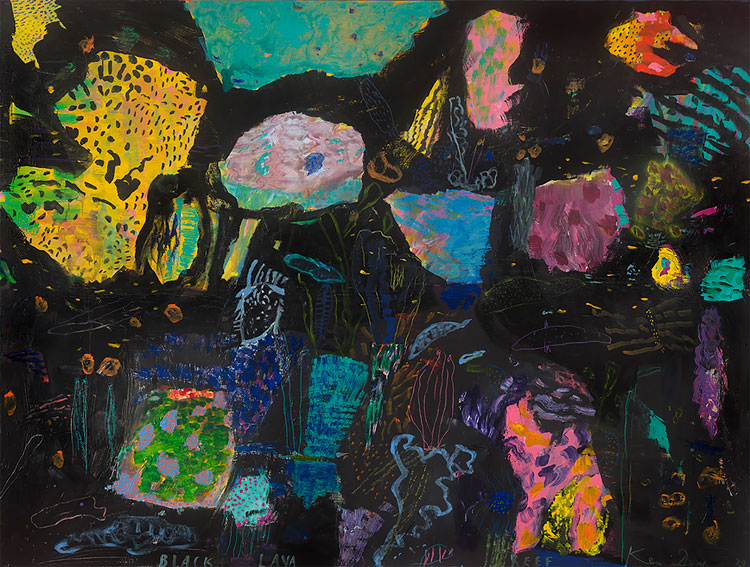 Janet McKenzie: I’m glad that you and your wife, Judy, are in quarantine with your family. As an artist whose work takes in the natural and unique beauty of Sydney Harbour, how is this enforced isolation impacting on your routine and studio practice?

Ken Done: It hasn’t changed my daily routine much. I always visit the studio first, before walking down, through the garden, to the beach. Judy and I swim, and then breakfast with the magpies and rainbow lorikeets. Then it’s back to the studio. On the back of the door, there is a sign that I wrote quite a few years ago. It says: “Painting for me.” Then, later, I painted over it, in much bigger letters: “PAINTING FOR ME.” Then I added the word: “Fearless.” And that, I think, surmises a painter’s life. At almost 80, I know I’m better than I was in that first exhibition 40 years ago. And as you age, you should be fearless. Take more risks. You have to surprise and please yourself. 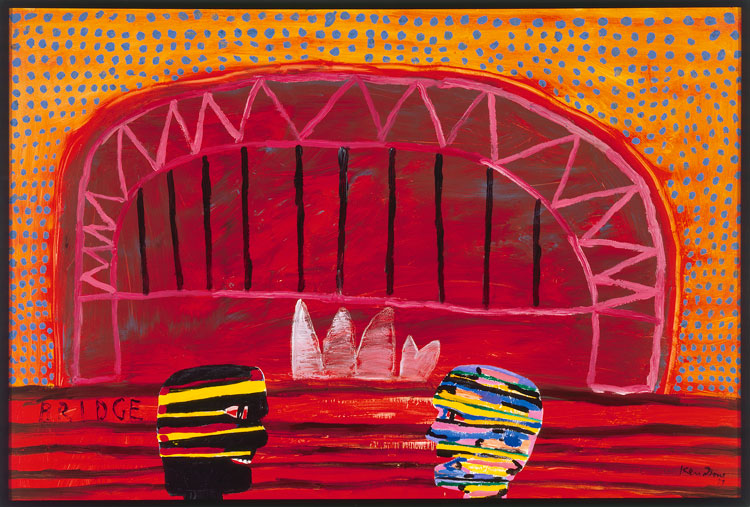 JMcK: You have responded artistically to every tiny change and nuance in nature, and particularly to the light effects on Sydney Harbour.  Can you discern any change in your work, first from when you were diagnosed with cancer in 2011, and now during the most unprecedented global disaster, the Covid-19 pandemic?

KD: My most recent works are looser and more interesting. When I finish a work in the studio, it comes up to the house so that I can live with it for a while. Walk past it. See it out of the corner of my eye. Or just stare at it for a bit. If I’m happy, then it goes to the photographer and then to the gallery. I want to do work that gives pleasure over time. Not everything on the first glance. Like not everything on the first date. A good work’s a long-term relationship. 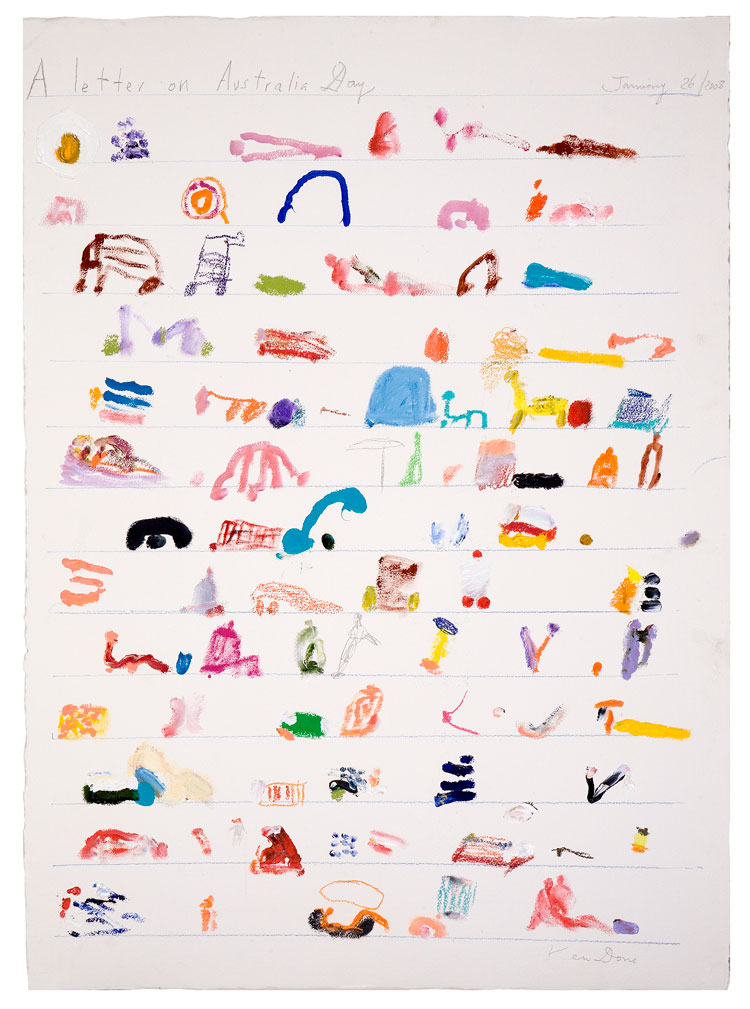 JMcK: Every year you make a painting on Australia Day, 26 January, and on Anzac Day, 25 April. Can you explain what prompted the ritual to memorialise these national days?

KD: My father and my uncles and my grandads all served in the war. Being born in 1940, the war is part of my earliest memories. Even today, the songs my mum played on the piano during those days still touch me deeply. I make paintings to show respect for all those people whose sacrifice made the life we have in Australia possible.

KD: All Australian artists should pay respect to Aboriginal art. The dots, the stripes, the patterns of their dreamings are a wonderful source of inspiration. And the fact that they can sometimes work collaboratively on a single work is something that we white blokes could learn. 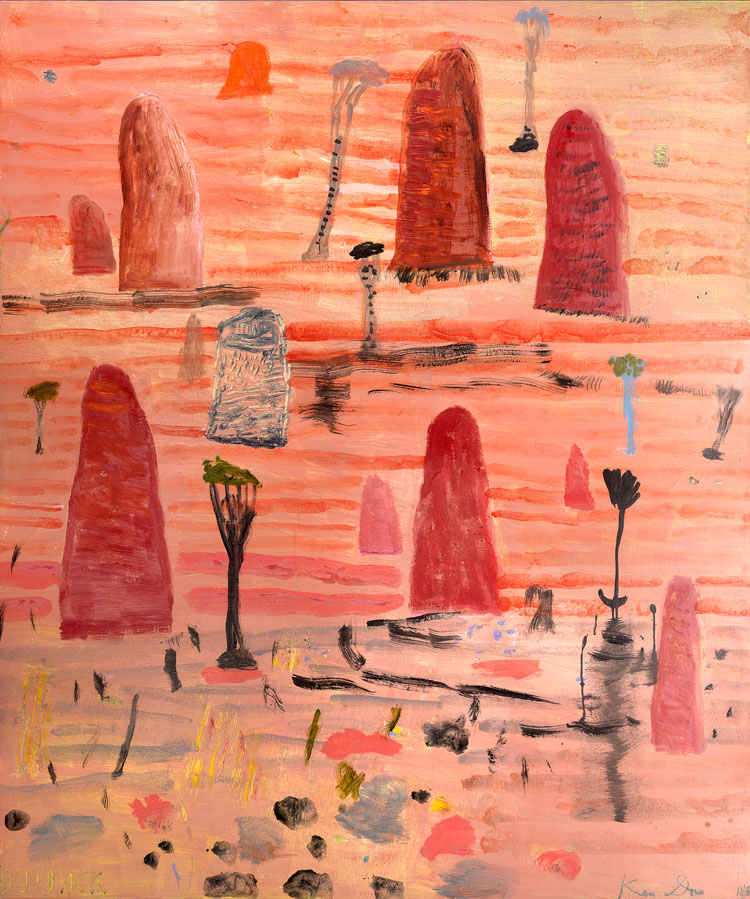 JMcK: Can you clarify the ideas around the recent painting Outback (2018)?

KD: Outback came from a trip to Kakadu where we camped among the scrubby bush and the giant anthills. It’s amazing to be in the ticking heat of such an astounding landscape.

JMcK: It is appropriate that you have dedicated a recent painting of the Great Barrier Reef (where terrible damage has been done by global warming) to your granddaughter. Can you explain the significance of Ava’s Reef (2016)?

KD: I’ve made so many underwater paintings that sometimes I struggle to find a new name. Ava is my eldest granddaughter. She was 10 when I did this painting. She is beautiful and bright, just like the reef. Then, of course, as I have my second granddaughter, Stella, then eight, I had to make a work for her. Then one for my grandson, Marlon. All the kids dive and snorkel and we have had many great adventures underwater in various reefs in Australia and the Pacific Islands. 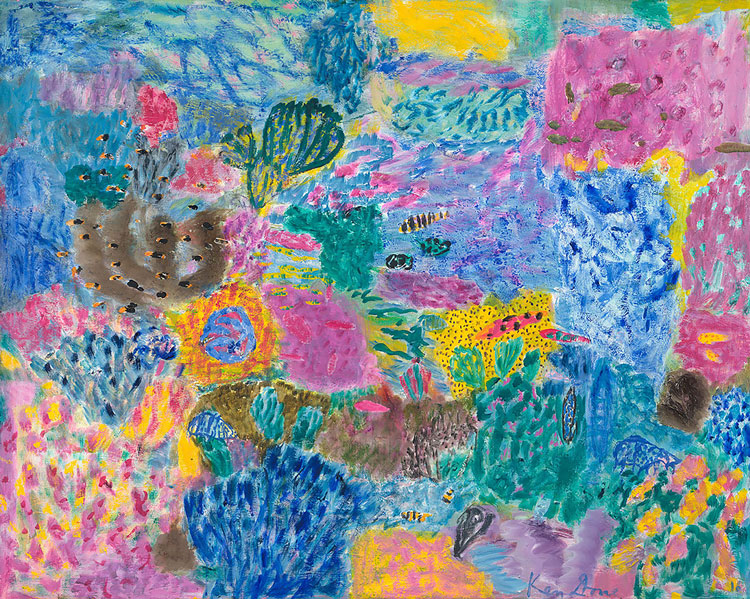 Recently, I’ve finished a large work (200 x 300cm) and called it Big MASK Reef. M for Marlon, A for Ava, S for Stella and the K for me. We all worked on parts of it. Their marks might, in the end, have been painted over, but their spirit is still here in this work. 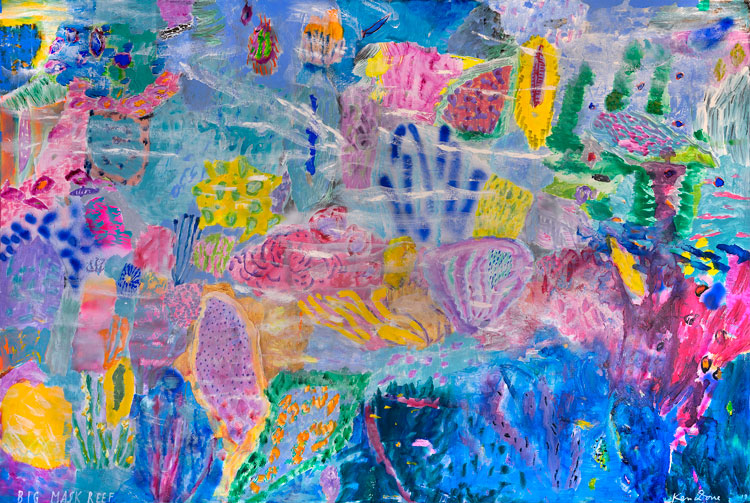 JMcK: You have made images of Sydney Harbour for more than 40 years and the arch is echoed by numerous very poignant images of Uluru (Ayers Rock). How did the symbolic images take form?

KD: I was always struck by the fact that the curve of the Sydney Harbour Bridge and Uluru were quite similar (with a little artistic licence). And the Olgas could be thought of like the shapes of the Opera House. Over the years, I’ve made many works exploring that idea.

JMcK: What work have you made since the trip to Papua and New Guinea? And what are you working on at present?

KD: In January, we went to dive in Raja Ampat, on the west coast of Papua New Guinea and to swim with the whale sharks. It was an amazing experience. And we were thrilled on the last snorkel to explore a reef that has grown on black lava from an eruption 30 years ago at Banda Aceh. The nutrients from the volcano help the coral to grow and it’s quite remarkable to see how quickly it has evolved. I don’t try to make paintings of what it looks like; rather. I want to try and show what it feels like. 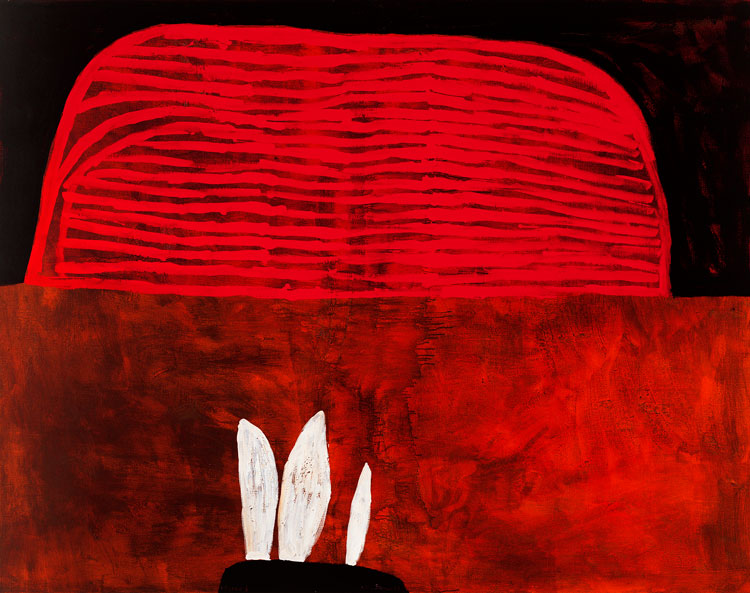 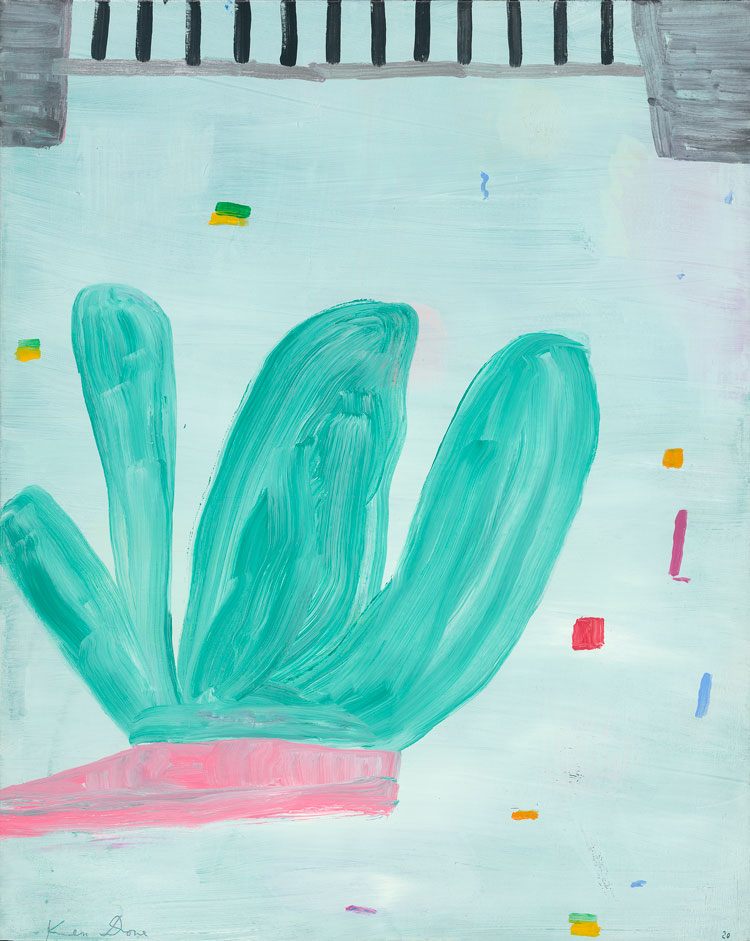 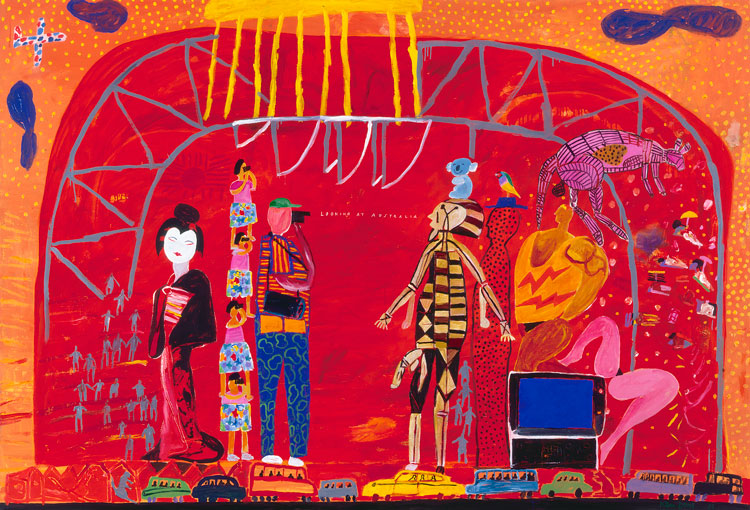 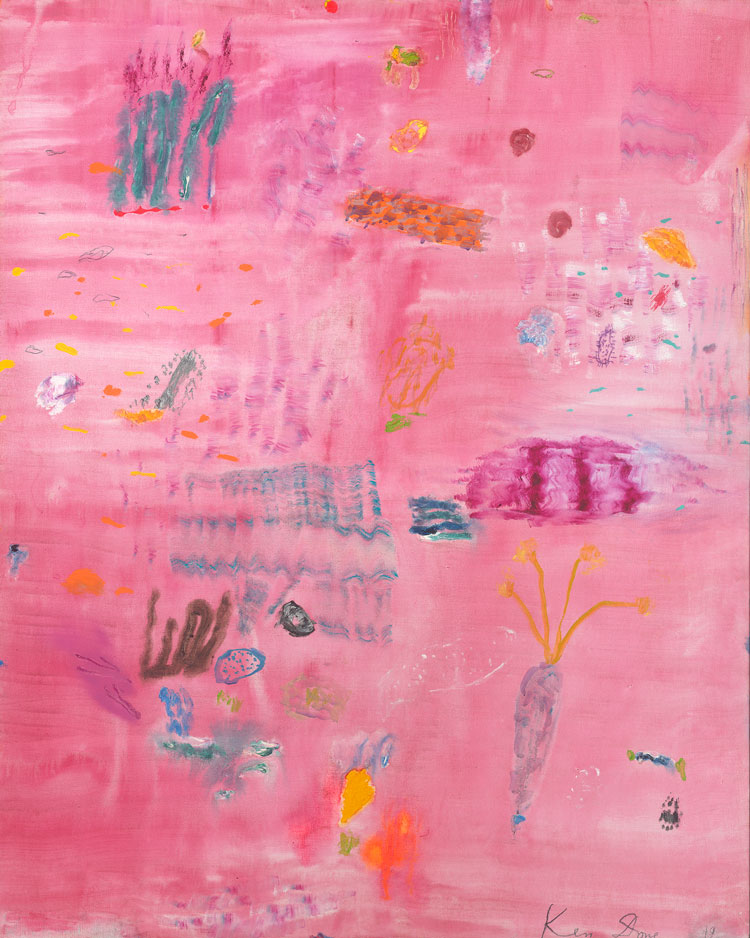 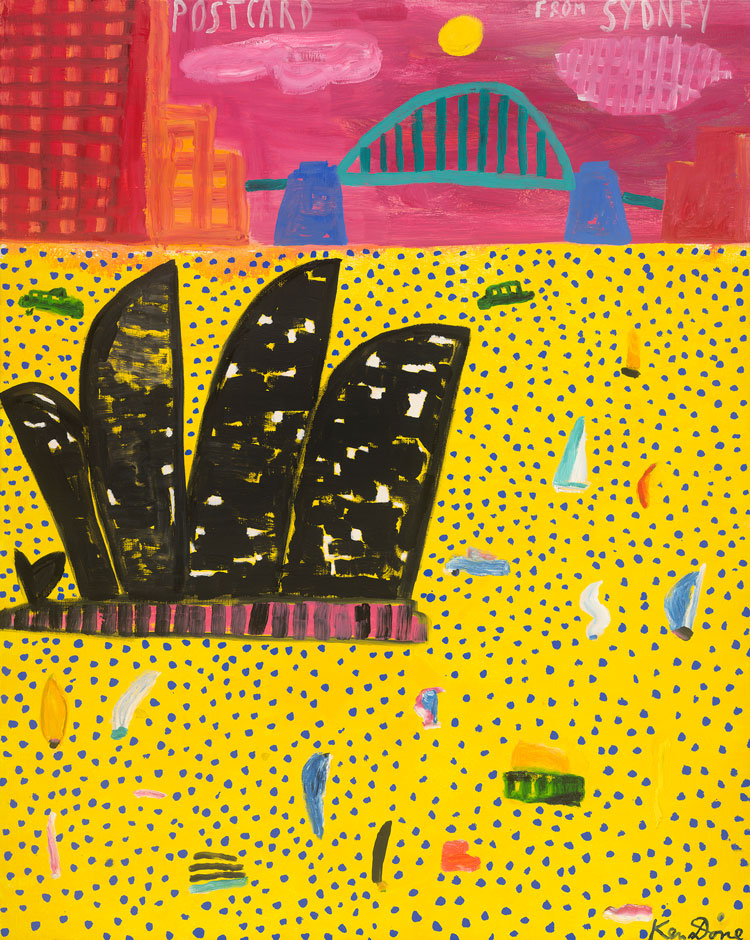 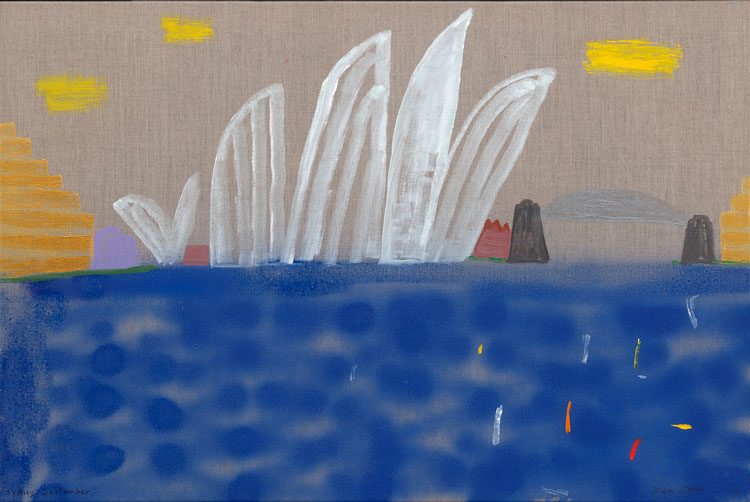 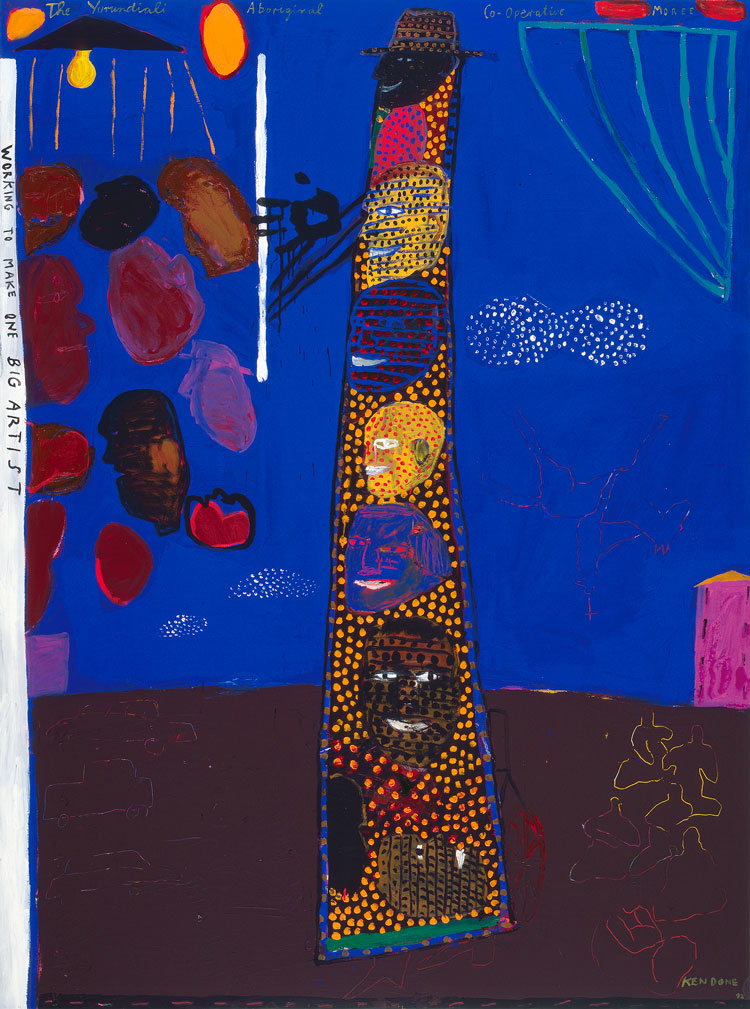 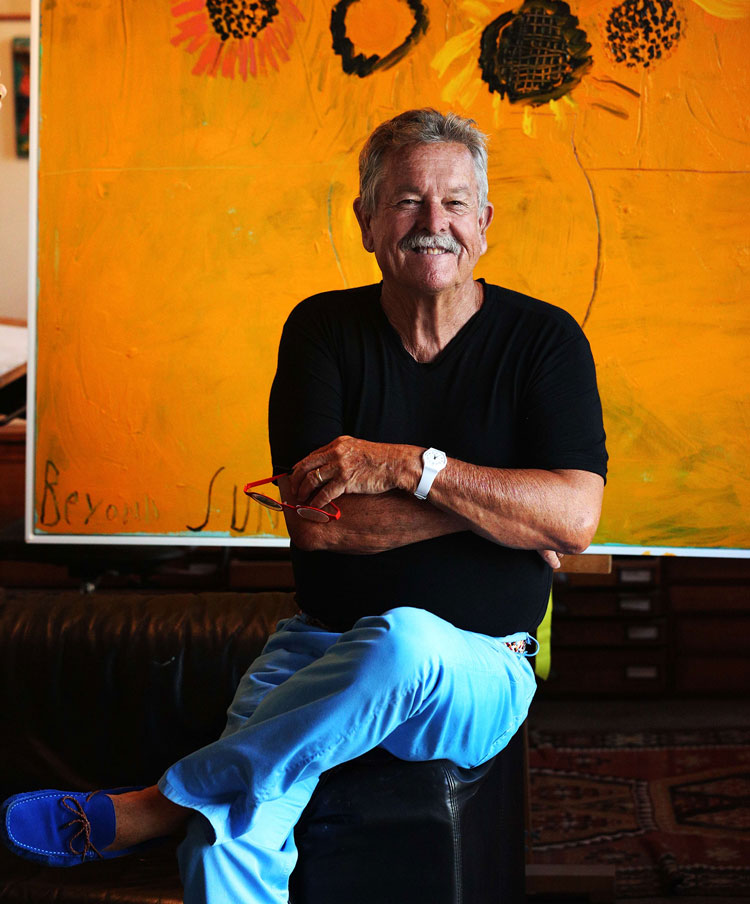