Kate Downie and Susan Winton: Drawing on the landscape

Kate Downie and Susan Winton: Drawing on the landscape

Both these painters are engaged in defining their place within the landscape. From the Forth Bridge to the Parramatta River north of Sydney, from Shetland to the Spanish coast, these two women draw on their Scottish home base and their travels for inspiration

A week after visiting Frances Walker, one of Scotland’s most important art educators, I visited Kate Downie’s exhibition with Susan Winton at Cobalt Contemporary Arts Gallery in Pittenweem, Investigating the Landscape and her solo show at the Scottish Gallery in Edinburgh, Estuary. Downie was one of Walker’s students in the 70s and there was an immediately discernible quality of exploratory drawing in ink in the etching that Walker is working on at present and the works on show in both of Downie’s exhibitions. Another of Walker’s students was Arthur Watson, now president of the Royal Scottish Academy; in the introduction to Downie’s exhibition catalogue for her 2013 show Walk Through Resonant Landscape, the consequence of her Chinese residency and travels, Watson observes the contribution made by Walker to her students’ ability to perceive and explore the unique landscape of Scotland and for the primacy of drawing: “With a base on the island of Tiree, [Frances Walker] ranged across the West Coast and Western Isles interrogating the coastal margins – the rhythm of pebbles across a storm beach or the fractured architecture of a rocky foreshore, meticulously recorded through a vocabulary of precise but unforgiving ink lines.”

The relationship in the British Isles to the coast and the sea has long captured the imagination of writers and artists from JMW Turner to Tania Kovats, whose highly original publication last year, Drawing Water: Drawing as a Mechanism for Exploration, is a collection of drawings and writings connected by the sea. Kovats describes her drawing practice as “the shelter I run from and return [to]”. It is a journey pulled by the tides, blown by changeable winds. The works can be likened to a chart of intersecting lines that crisscross over the water. “I draw to find my way out. Drawing fills the space,” she says. She continues: “I see drawing as a way of thinking and also evidence of thinking; of going from one place to another. One draws to define one thing from another.”

Contemporary drawing lends itself to the exploration of place and is informed by various levels of experience, personal and conceptual. The terminology defined by Kovats enables a deeper appreciation of Downie and Winton’s respective practices; both are engaged in defining their place within the landscape. I spoke to them both at Cobalt Contemporary.

Born in North Carolina in 1958, Downie moved to Scotland at the age of seven, later studying fine art at Gray’s School of Art in Aberdeen. She had a key residency in Beijing, and was appointed the first artist in residence at the Forth Road Bridge Edinburgh in 2014, to mark the 50th anniversary of the bridge’s opening. Since the late 80s, when she was living in Paris, she has been interested in “La Place” – a point in the land where roads meet. She has also travelled widely – most recently in China, Australia and Japan – to incorporate bridges in her work, that in turn to enable her to allude to journeys, migration and travel.

In my interview with her at Cobalt Contemporary, she explained that she has had an abiding fascination with estuaries since moving from North Carolina to the Ythan Estuary in north-east Scotland as a child: “The water could change from peaceful to treacherous in a flash; the power of the tide through the pull of the moon dominated the appearance of the beach, that was washed by the river and the sea.” The elemental “cleansing of the estuary by river and sea leaves the slate wiped clean”, a potent image for an artist and one that can be seen to parallel the ephemeral nature of art from other cultures such as the Australian Aboriginal culture that she has recently explored. The Ythan estuary was where Downie made her first large drawings. The ambitious work, Drawing the Pibroch was made direct on to the walls of the Royal Scottish Academy in 2012.

Drawing remains pivotal to her art practice and was greatly empowered by three trips made to China since 2010. Fascinated by the manner in China where traditional calligraphy and ink painting are embedded in, and juxtaposed with, the technological and commercial assault on the senses, works such as Metal Fatigue and the frenzied marks in Feijiacun Walk I (Student-Teacher) capture the tenuous relationship between human progress and environmental destruction. Downie immersed herself in ink painting that was a natural extension of her early works.

Both exhibitions this spring reveal the influence of the work done in China and Australia and the Forth Bridge residency. The painting Estuary Life (Parramatta Jacaranda Frangipani) is a delicate yet confident celebration of the remarkable beauty of the Parramatta River north of Sydney, more visually exciting given its stark contrast to Scotland.

After training at Duncan of Jordanstone College of Art and Design, Dundee, in the early 80s, Winton, who was born in 1960 in Arbroath, moved to the remote Shetland Islands, where she lived for three years. In 2008, she won the Richard Demarco prize for Scottish Painting (2008). The work in the present exhibition is drawn from recent travels to Italy and Spain: she uses coastal landscapes to define self and humanity’s relationship to the wider world. Materials such as wax, plaster and gold paint are employed to heighten allusions of mortality found historically in art and literature in the sea.

Although Winton chooses acrylic wash, the images in the exhibition at Cobalt Contemporary Arts Gallery are essentially drawn images; drawing provides a means of gathering information from the places she visits and expressing it with a sense of immediacy. Images of the coastal areas from Arbroath in the north-east of Scotland where she grew up, to Spain and Italy focus on the timeless nature of human existence. References to the sea, to voyages made are based in observation though essentially spiritual.

“Shetland has such a rugged land and seascape and the elements can be observed every day,” she says. “Cliffs with dramatic storms approaching, persistent wind and rain; as an artist, it’s impossible not to be affected. A big part of my life is spent walking: it forces me to think more about the elements, and living on Shetland after completing art school heightened my awareness to the extremes in nature. One of the main things about the recent travel, walking and travelling in Spain, Italy and France, was being on high alert, sleeping in a van for four months between October 2014 and February 2015 feeling that each day would bring something new.”

Living in the remote community of Shetland presented the opportunity to focus on the traditional island way of life there, although she is quick to point out that the oil industry had brought great wealth to the island and, with it, cars and a high incidence of road accidents. Shetland has a curious mix of traditional and new and is a melting pot for different cultures (Russians, Faroese, Icelandic). Scottish culture is deeply imbued with references to coastal life, most recently the issues of sea pollution, fishing quotas and, by extension, the urgent threat to the natural environment globally. Winton’s painting of the Spanish coast, Cap y Corp, reflects the artist’s sense of wellbeing after a day spent clearing all the rubbish from a small beach, the refuse dumped at sea from boats.

The Scottish artist Will Maclean was Winton’s tutor and she admired his imagery derived from the sea and its dramatic history, the manner in which he attained a great sense of identification with lives lived and the sheer physicality of Scotland’s west coast. She was also influenced by Joan Eardley. “She changed the way I painted. She encouraged me to use a built-up, textured surface, to look beyond the particular to a more universal language.” Her mark-making from the landscape owes a debt to the Spanish painter Antoni Tàpies, and her use of plaster and wax to Rachel Whiteread’s haunting work. Recently, Winton has carried the materials from her built-up paintings to create small sculptures that resemble a geological cross-section of the Earth. Embedded wire alludes to industrial detritus; wax to water and air.

Drawing is pivotal to Downie’s accomplished new body of work, which has absorbed influences from Chinese calligraphy, Japanese design and Australian Aboriginal art. Winton has, until recently, been largely devoted to teaching, but now, through exploratory drawing while travelling, is discovering diverse paths to augment her practice. 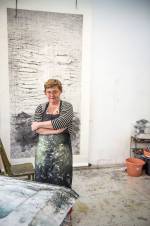 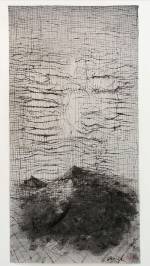 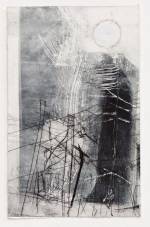 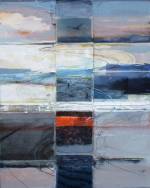