In his attempts to untether architecture from well-worn conventions, the Japanese architect liberates the architectural expedition from its own stolid norms 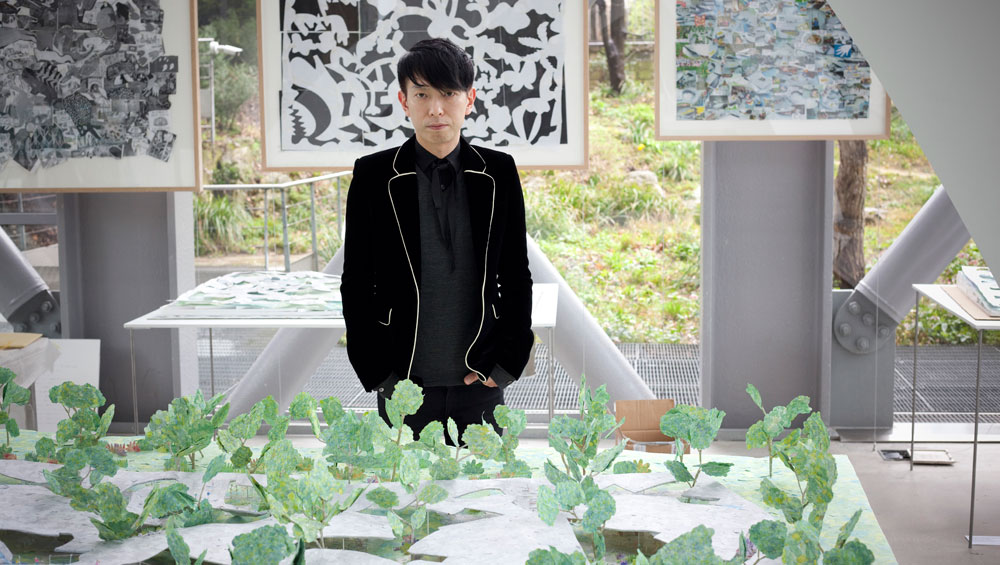 It takes a particular kind of genius to design a building around animal silhouettes. The Forest Kindergarten, a work in progress by the Japanese architect Junya Ishigami (b1974), has a roof modelled on the outlines of crocodiles, octopuses and other creatures, drawn from children’s illustrations. Within, there are to be spaces so small that adults are unable to enter, and spaces too small even for children to enter. As its name suggests, the whole is to be woven around a dense forest, opening architecture up to nature.

The Forest Kindergarten is one of the 20 buildings featured in Freeing Architecture, a survey of Ishigami’s built and unbuilt structures at Paris’s Fondation Cartier. It is not your everyday architecture exhibition, as Ishigami’s oeuvre is not your everyday architecture. Many of his works gleefully ignore the pieties of contemporary architecture and demonstrate genuine ambition to achieve what has not been done before. His House of Peace, to be floated on Copenhagen’s Nordhavn harbour, is a cloud-like pavilion that visitors must access via boat. Another project, a retirement home in northern Japan, saw him save several traditional wooden houses from being condemned and move them all on to one site, creating a densely woven village that allows for a sense of community. At times, it can seem as if Ishigami works from a child’s perspective, full of wonder and refusing to admit the impossible. But each of these projects – even the unbuilt ones – has a logic underpinning it. Where but in the clouds can you find true peace from earthly concerns? Why should the elderly live in hospital-like care homes rather than communities echoing their homes in earlier life? Ishigami seeks not to free architecture for his own creative self-indulgence, but to challenge limiting norms. 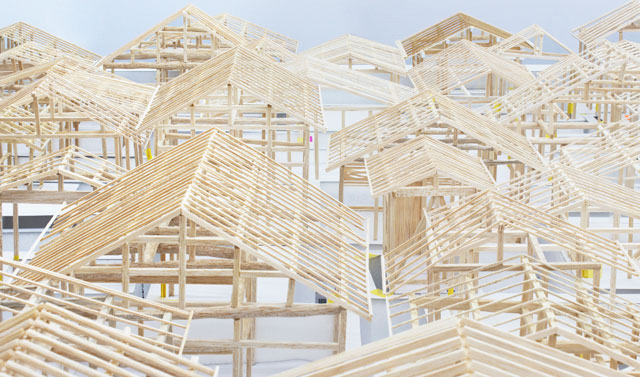 In this, he is part of an ongoing shift in Japanese architecture, away from the concrete modernism and metabolism that defined its late-20th-century reputation. The pioneer of this change was Toyo Ito, whose Sendai Mediatheque, completed in 2001, abounds with public space. Structured around a series of irregular, tree-like columns, it refutes conventional room-based demarcations of space. He was followed by his pupil, Kazuya Sejima, whose practice SANAA takes Ito’s principles to spectacular extremes. SANAA’s Rolex Learning Centre at EPFL Lausanne replaces walls with curving windows and undulating floors, cultivating spaces that can be organically adapted by their users. The almost imperceptible glass edges – calling them walls feels somehow incorrect – bring the surrounding world within. Ishigami continues this consideration of landscape. “I want to make a new scale of architecture, a natural scale, an elemental scale,” he said in an interview in the Observer in 2011. By this, he does not mean gigantism. Rather, he aspires to an architecture that reflects and parallels nature, nestling sympathetically within it instead of being in opposition to it. The connection between nature and architecture is longstanding: in around 20BC, Vitruvius wrote that architecture stemmed from humans’ interactions with the natural world, and that classical building emerged from the imitation of nature. Tree trunks became columns, rock formations pediments, and so forth. 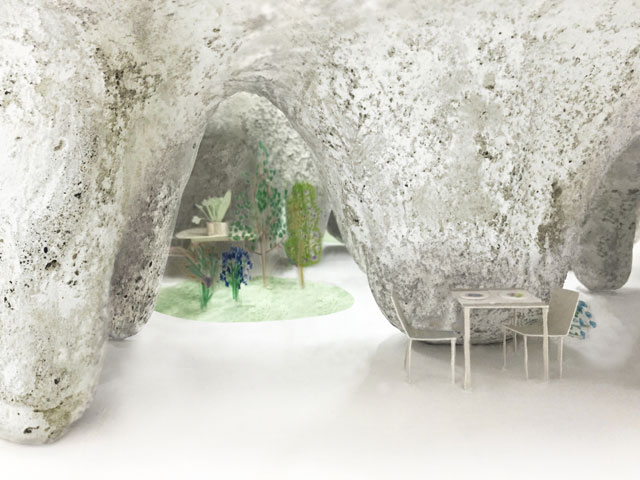 But Ishigami wants to go further, to collapse as far as possible the boundaries between the two. One of his most extraordinary projects, the House and Restaurant, now under construction in Yamaguchi Prefecture, began when a client asked for a space resembling a wine cellar. Ishigami responded by digging out craters in the ground and filling them with concrete; soil from the extraction was grafted to the concrete to provide a finish that simulated the grain of rock. The resultant building bears the imprint of the earth from which it is hewn. It feels like an actual subterranean cavern rather than a building masquerading as one. Another ongoing project, eight villas in Dali, China, is a set of holiday homes set among the area’s characteristic stone megaliths; rather than building around them, however, Ishigami uses some of the huge rocks to support a 300-metre-long concrete roof. 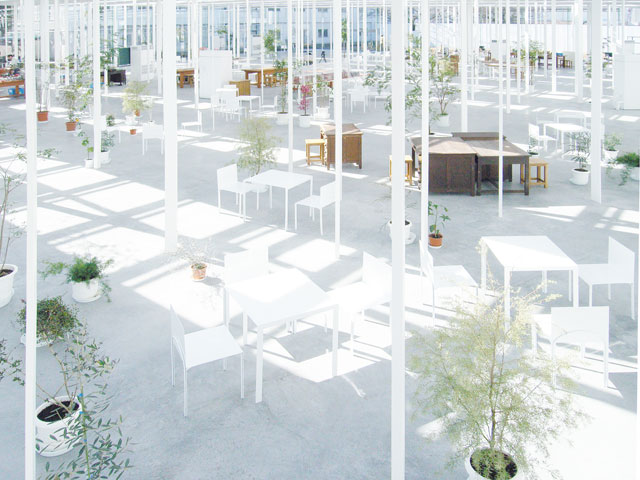 Long canopies are the closest thing to an aesthetic hallmark in Ishigami’s architecture, although no two are quite the same. The roof of a cultural centre intended for Shandong slightly curves as it slides between two bodies of water, meant sometimes to penetrate the glass and make an interior shore. The roof of the University Multipurpose Plaza, planned since 2008 for the Kanagawa Institute of Technology, is a single continuous sheet of steel, marked with square recesses to allow rain to fall down, in imitation of a waterfall. Supported by perimeter walls rather than pillars, it would be a feat of engineering comparable to, say, Norman Foster’s Sainsbury Centre, but unlike such hi-tech buildings it downplays its technical ingenuity rather than making it explicit. In one sense, Ishigami’s mode is simultaneously minimal and maximal: the former in terms of its lightness and attempt to blend in with what is already there, the latter in its audacious engineering and scale. 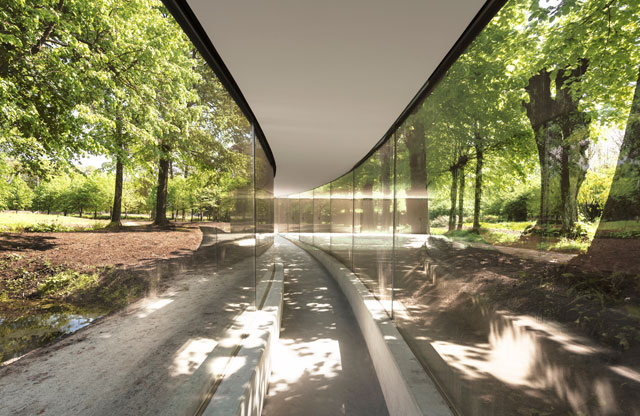 This is echoed in the exhibition itself. Entering Freeing Architecture is akin to stumbling on Lilliput. Ishigami’s models, thorough in construction but far more impressionistic than conventional architectural models, are arranged like lily pads in a pond, or clouds across the sky. Each model differs in style: a water garden in Tochigi is represented as a wintry landscape with silvery impresses for the water, while Forest Kindergarten is speckled with plastic-and-paper trees. Some have tiny white human figures set in various poses of contentment. Further materials, such as Ishigami’s delicate drawings, are arranged around the edges. These, too, have a dash of whimsy alien to much architecture. Each project is accompanied by a text, written in prose but arranged like poetry, that melds matter-of-fact description with flights of optimistic fancy: “A place to move beyond the fences erected by religion and contemplate world peace,” reads one. This could be cloyingly twee, but the show’s overwhelming tranquillity, the ingenuity of Ishigami’s ideas and the light-filled Fondation Cartier win out. On the glass-walled ground floor of Jean Nouvel’s building, the teeming garden outside rolls into the room, as if contiguous with the exhibition. Although the second half, in the basement below, lacks this iridescence, its sepulchral solidity does have a meditative quality that prevents Ishigami’s projects from unmooring into pure sky-bound whimsy, as do the periodic videos that translate the models into bricks and mortar. 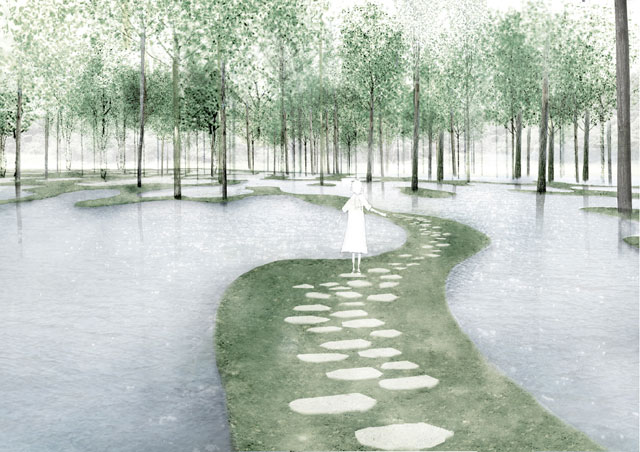 A lot of Ishigami’s projects are “in progress”, caught in the ambiguous realm between non-existent and existent into which architects are liable to consign the projects that may never be realised. And it is true that only a handful of Ishigami’s imaginings have been fully incarnated, although with confirmed works as far-flung as Copenhagen and Sydney, this looks set to change. But whether or not he manages to free architecture, Ishigami has certainly freed the architecture exhibition. While many rely on compendiousness, room-size installations and excessive wall text as they attempt to translate a highly technical medium to the art gallery, Freeing Architecture has just enough of everything to both inform and fire the imagination, rare traits in its field. On my visit, the faces of most attendees were sealed into a delighted smile – a significant achievement in its own right. 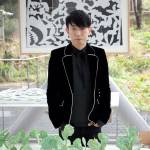 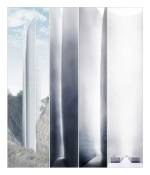