Escaping from the shadows of The Dinner Party, a career-ranging survey of the pioneering feminist translates private thoughts into public display 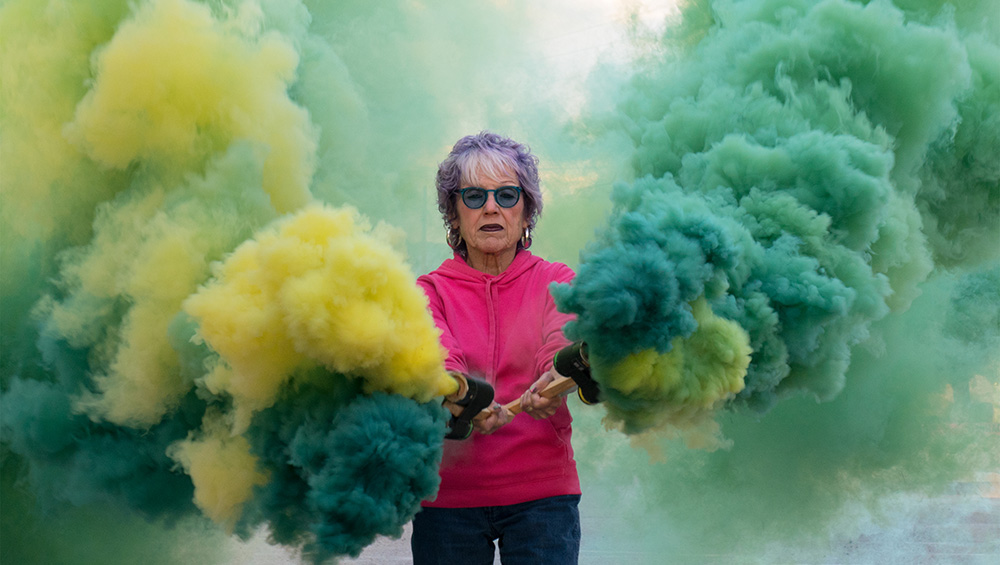 The year between spring 1993 and 1994 was not the kindest one for Judy Chicago (b1939). She had moments of anxiety and aggravation about almost everything, including money, ageing and the decline of her own creative powers. She chided herself for making “bad art”, and raged at her husband “for staying in bed”. One day, she felt “like she was beating a dead horse”, while, at a particularly naked moment, she kneeled “praying to live long enough for her star to finally shine”. All the while, she was unable to find a major museum willing to exhibit The Holocaust Project (1985-93), a cycle of paintings that had consumed Chicago and her husband, Donald Woodman, for almost a decade. 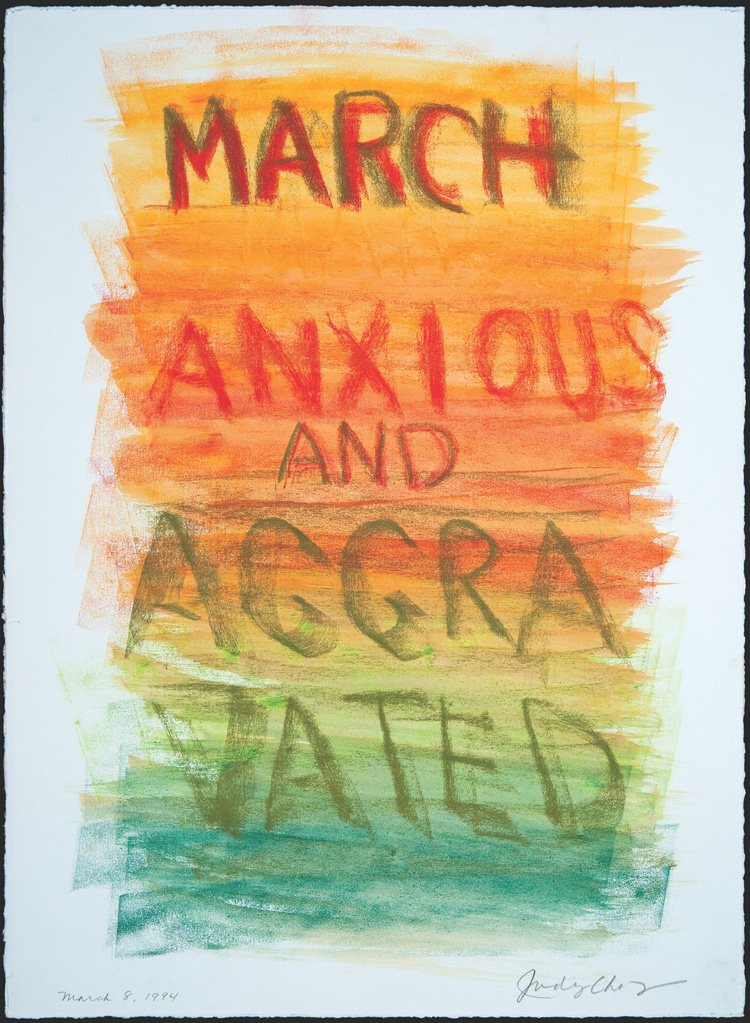 We know all this from Autobiography of a Year (1993-94), a collection of 140 image-and-text watercolour-and-pencil drawings spanning the course of 12 months. They provide unmediated access to Chicago’s thoughts of the time. Each is colour-coded to represent an emotional state; apart from “happy” yellow and “calm” blue, the range is skewed towards the negative, with grey representing “depressed” and black “suicidal”. Assaying the work as a whole, there is a lot more grey and black than yellow and blue. The most persistent comfort comes from her cats.

Seen today, as part of the Baltic Centre for Contemporary Art’s exhibition of Chicago’s work, it remains raw and unnerving in laying out its artist’s insecurities. The slapdash aesthetic of the individual pictures, with faux-naif texts in an uneven hand, is suited to their extempore genesis. Chicago’s willingness to parade her innermost thoughts retains its jolt of unexpected intimacy. It also plays on our empathy: many of her concerns are also our own. 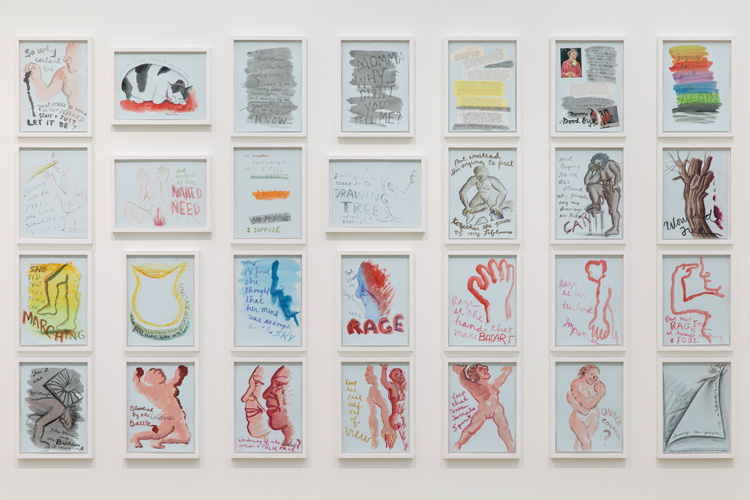 Autobiography of a Year’s self-excavation might come as something of a surprise. Chicago is best-known for celebrating the lives of others. For more than 30 years, her name stood for a single work, The Dinner Party (1979), a triangular table set with places for a pantheon of 39 significant woman, from prehistoric goddesses to modern artistic icons. Each section was laid with a custom-designed table runner and plate, the latter based on genitalia.

The Dinner Party caused an immediate sensation. Many conservatives condemned it, while feminist and liberal critics were divided. Some praised it for its direct feminist message and for bolstering the status of historically feminine mediums such as ceramics and embroidery. Others criticised it for essentialising women to body parts; for largely erasing all but straight white women; for not being a truly collaborative work; and for its homespun aesthetic qualities. Unwelcome in many American museums due to its vaginal imagery, it nevertheless toured six countries and was witnessed by an audience of 15 million.

Now housed permanently at the Brooklyn Museum, The Dinner Party has not made the trip over to Gateshead, although it is represented by commentaries and some test pieces. Its absence is a blessing in disguise, allowing other facets of Chicago’s broad practice to shine. For too long it has occluded almost everything else she has produced. It took until the first instalment of the Getty Foundation’s initiative Pacific Standard Time in 2011 for the extent of her role in Southern Californian art to be brought to the fore. Since then, Chicago has been enjoying something of a renaissance, with exhibition after exhibition delving into her back catalogue.

One likely cause of this long-term neglect, which persisted even after many of her feminist contemporaries became museum fixtures, is the sundry nature of her work. The selection in Gateshead eschews pigeonholing and market-ready commodification. The earliest piece represented here, Purple Atmosphere (1969), blanketed a Californian desert in a soft violet mist (to create it, and other installations like it, Chicago took a course in pyrotechnics). Existing temporarily before dispersing without a visible trace, Chicago’s embrace of transience places her in stark contrast with those male land artists who marked, bored and reshaped the Earth for prosperity. A pair of sprayed abstract paintings from the early 70s see more gentle hues mixed with white to acquire an almost see-through sheen, a style she adopted to contrast with the painterly explosions of male-dominated abstract expressionism. In recent years, she has turned to the similarly translucent medium of stained glass, though at the Baltic we see only studies rather than the final objects. 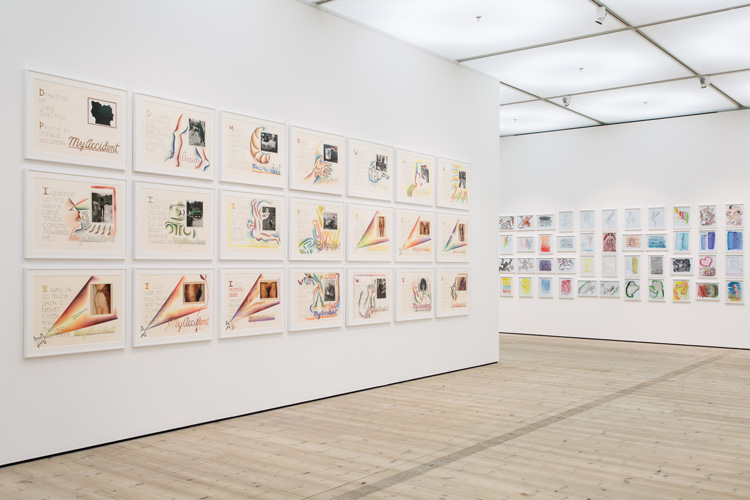 What connects the vast majority of Chicago’s work is her mission to translate into art those aspects of human experience that it had long neglected. Often, as with Autobiography of a Year, she uses herself as a conduit for these concerns. The 21-panel My Accident (1986) narrates an incident the year before in which the artist was hit by a truck while jogging. A private incident is thrust into the limelight. On each section, a frank text – “When I came home I looked at myself in the mirror and wept,” reads one – is joined by a drawing by Chicago and a photograph by Woodman tracking the event. Some of the latter show the artist’s bruised body. Despite the naked severity of this story, it ends with expectant hope – Chicago and Woodman lying in bed together, embarking on their marriage.

For all the misfortunes in Chicago’s art, it seldom wallows. Instead, it confronts them head-on. In the studies for a recent sequence of series, The End: A Meditation on Death and Extinction (2012-15), she speculates about her own death. One section, modelled after psychologist Elisabeth Kübler-Ross’s disputed five stages of grief, shows her moving towards acceptance; another looks without flinching at the possible manners in which she might die, whether “screaming in pain” or “in my husband’s arms”. Even when confronting mortality, Chicago encourages honestly rather than denial. 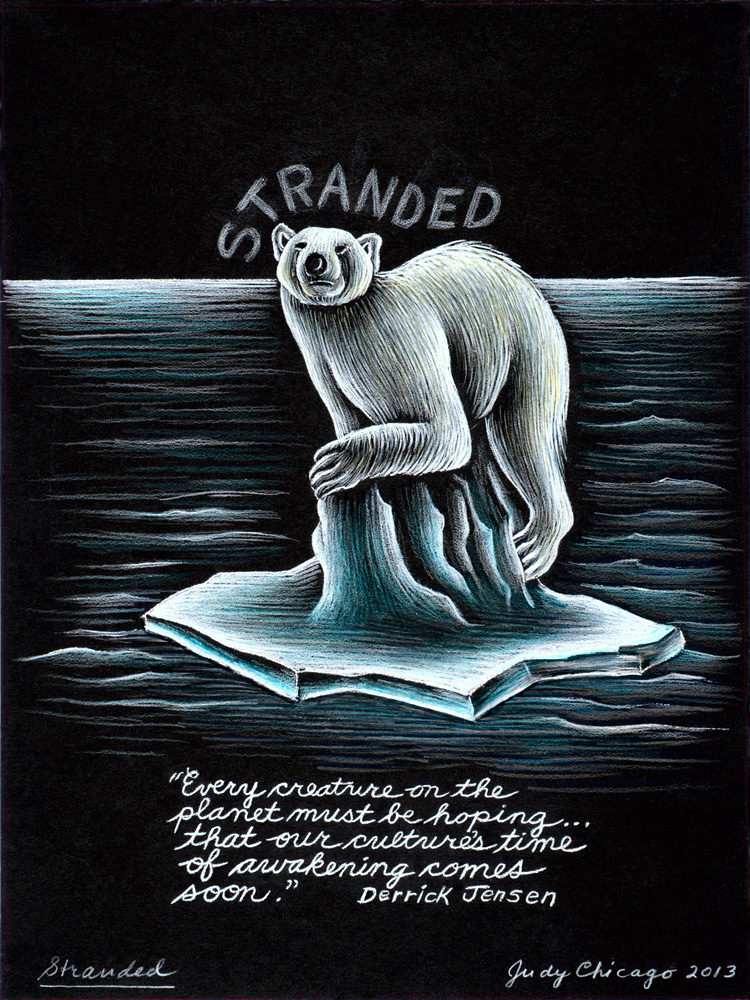 Chicago’s interest in human experience is not limited to her own. The Birth Project (1980-85) saw her work with more than 150 needleworkers across the US and Canada on a cycle of embroidery panels depicting the act of childbirth. As with The End, it saw her usher out thoughts and experiences often hidden behind a veil. In the accompanying text, Chicago wrote: “When I began working on this subject, I was horrified to discover that there were few images of birth in western art.” A pair of panels at the Baltic are joined by extended reflections from two of the needleworkers, recounting their experience of working with Chicago.

Beyond its groundbreaking subject matter, Birth Project’s collaborative drive, interest in documenting the process of its production and embrace of craft forms makes it something of a retrospective milestone. All of these have since become recurrent features of contemporary art as it moves away from a strictly delineated high culture, although whether that can be chalked up to Chicago’s influence, her presence or simple happenstance is another matter. Regardless, the Baltic’s survey proves that, in her own right, Chicago well deserves her renaissance. 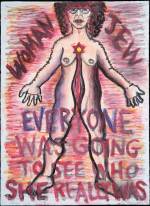 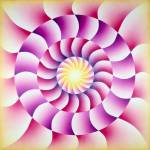