Huysmans, Art Critic: From Degas to Grünewald, in the Eye of Francesco Vezzoli

Huysmans, Art Critic: From Degas to Grünewald, in the Eye of Francesco Vezzoli

A diverting exhibition at Musée d’Orsay explores the influential art criticism of the quintessential decadent writer, helped – and hindered – by the contemporary Italian artist Vezzoli

À Rebours (Against Nature) (1884), by the French novelist Joris-Karl Huysmans (1848-1907), is the quintessential statement of literary decadence. It depicts the hyper-aesthete Jean des Esseintes’ attempts to reject society and nature in favour of pure aesthetic indulgence. With little in the way of continuous narrative, the novel follows Huysmans’ protagonist as he decorates his house and arranges his library. In one vignette, he creates a garden from poisonous tropical flowers, chosen because they appear more artificial than natural. In another scene, probably the novel’s most famous, he embeds gemstones in the shell of a tortoise, which is crushed by the increased weight. 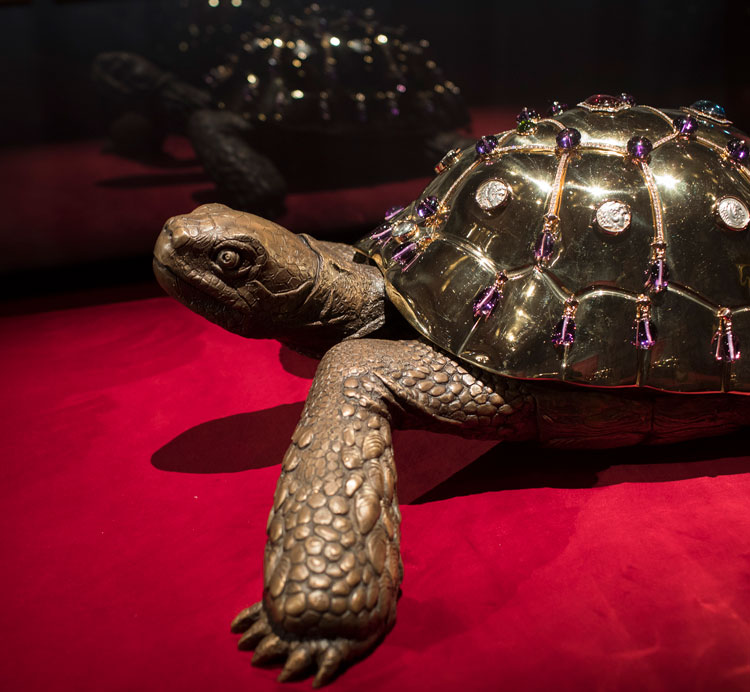 A simulacrum of this unfortunate creature has been contrived as the centrepiece of Huysmans, Art Critic: From Degas to Grünewald, in the Eye of Francesco Vezzoli, an exhibition at the Musée d’Orsay, Paris, that will travel this spring to the Museum of Modern and Contemporary Art in Strasbourg. It was created by Vezzoli, an Italian contemporary artist best known for his open-armed embrace of fashion and celebrity. Vezzoli has directed Gore Vidal and Helen Mirren in a fake trailer for a remake of Vidal’s infamous 1979 erotic epic Caligula and choreographed a performance by Lady Gaga. Away from these circuses, his work often involves translating past masters from one medium to another, or melding them with images from popular culture. 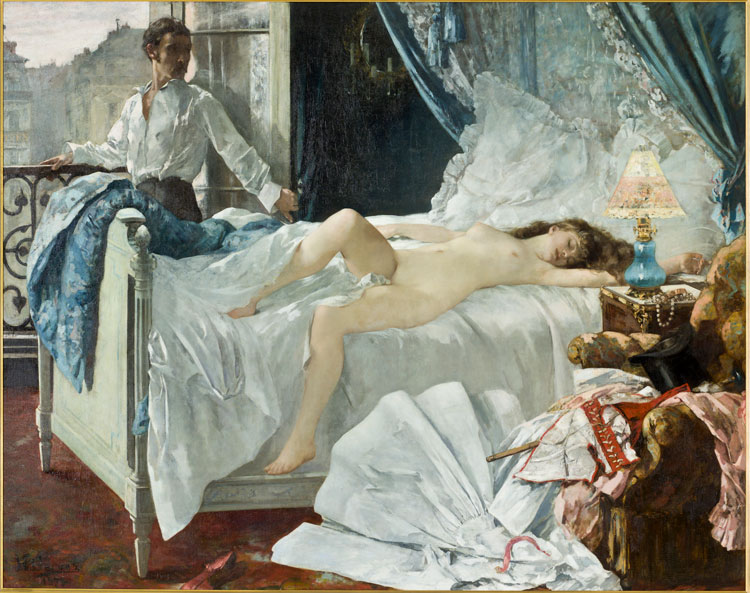 There is a whiff in this of “art for art’s sake”, the mantra of the decadent movement, where the Ruskinian notion that art has a moral value is cast aside. It might be a stretch, though, to compare Vezzoli to Huysmans’ more intellectually fixated protagonist; in 2011, the New York magazine critic Jerry Saltz aptly described a solo show of Vezzoli’s work as “empty-headedly decadent”. Here, Vezzoli has turned decorator, furnishing three of the Musée d’Orsay’s galleries to represent different stages in Huysmans’ thought. Each intersperses a smattering of Vezzoli’s own works with that of Huysmans’ contemporaries, many from the museum’s own collection. It also contains texts, largely letters, from the writer’s archive, the most exciting of which is the draft manuscript of À Rebours itself.

The presence of this novel threatens here, as it so often has, to overshadow the rest of Huysmans’ satisfying, many-sided career, which encompasses both sober, Émile Zola-indebted naturalism and extravagant emphasis on gothic architecture. In a time of raging debates between advocates of different artistic approaches, Huysmans’ art criticism for weekly periodicals was non-prescriptive, embracing naturalism and symbolism. An early advocate for the Dutch Golden Age, his tastes have shaped what is now regarded as the canon of the old masters. His views on his own generation were also prescient: while Zola dismissed Edgar Degas as a “minor artist” and the Goncourt brothers smeared him as a “constipated artist”, Huysmans identified his genius for depicting modern life. 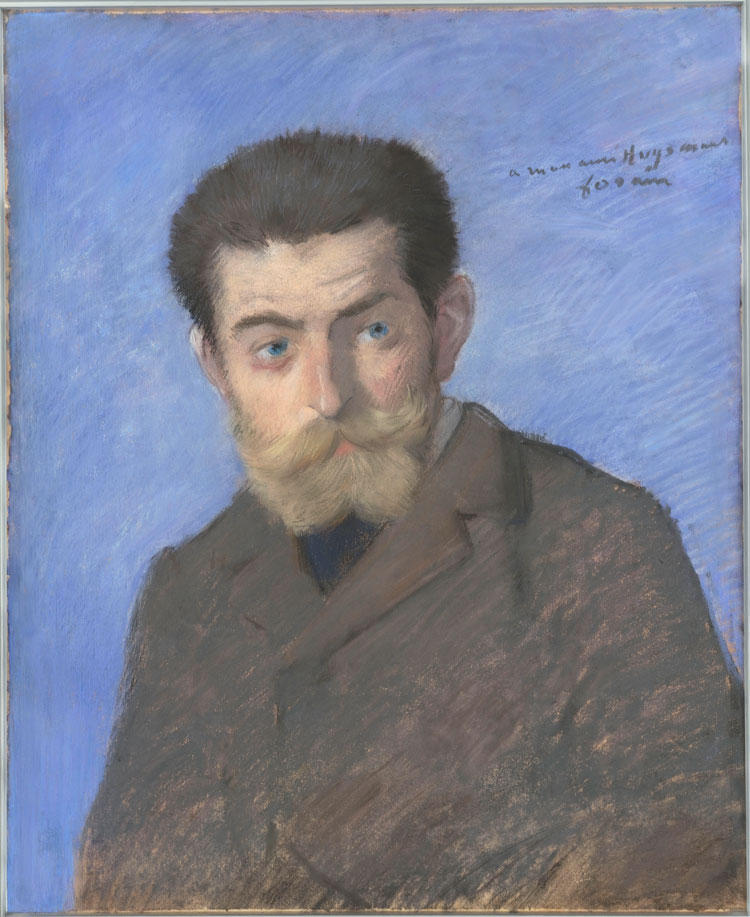 A full-time civil servant for the majority of his adult life, Huysmans was slightly removed from the grandest artistic circles of Paris. While Zola was immortalised by Édouard Manet, Huysmans had to settle with the era’s B-list. An 1878 painting by Jean-Louis Forain shows the young Huysmans as a figure of keen, intelligent eyes and sober manner; the printmaker Eugène Delâtre’s sketch-like depiction of 1894 has the now infamous writer as a debonair gentleman, with a hint of mischievousness.

Both feature in the exhibition’s first section, left white by Vezzoli to evoke a present-day gallery space. It provides a capsule tour of the tendencies at play during the 1870s and 80s. Major and minor impressionist works share space with the final gaps of academicism. Huysmans was often scathing about the latter. William-Adolphe Bouguereau, represented here by the meringue-accented Birth of Venus (1879), was singled out for a devastating dressing-down. The then-celebrated painter, wrote Huysmans, “has invented a gaseous style of painting, an inflated art. It is not even porcelain any more, it is flabby and overworked; I can’t even describe it, it is a bit like soft octopus flesh.” The Spanish-descended artist Fernand Pelez, meanwhile, was shamelessly mocked for his 1879 attempt to depict the assassination of the emperor Commodus. “At first,” said Huysmans, “I thought the man in the green bathing trunks leaning over the other man in the white bathing trunks was a masseur, and that the woman raising the curtain was simply saying: “The bath is ready.’” 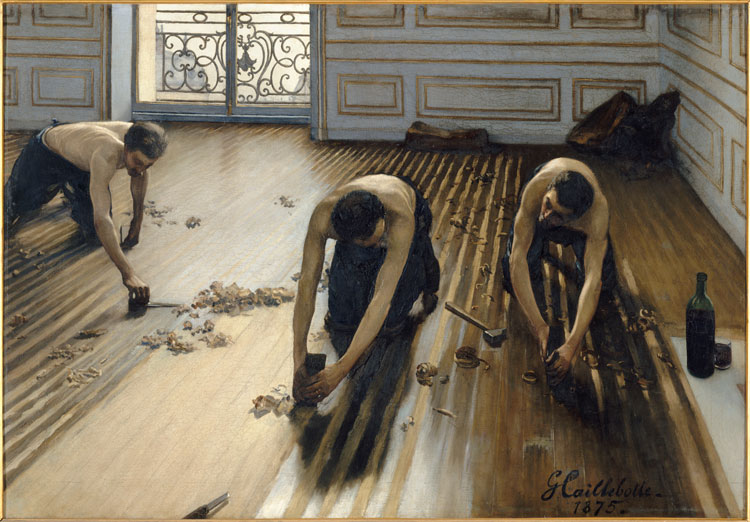 When it came to the art Huysmans enjoyed, he could be rhapsodic in his praise. He admired the perpetual impressionist also-ran Gustave Caillebotte, represented here by his masterpieces The Floor Scrapers (1875) and In a Cafe (1880). Huysmans chose the latter for inclusion in his ideal museum, along with several works by James Abbott McNeill Whistler. The American émigré’s wispy, ukiyo-e-indebted Variations in Violet and Green (1871) provides one of the exhibition’s finest pairings of work and text, as Huysmans singles out the American’s landscapes as “whisper-soft and tender, like a confession, like a caress”. In comparing Whistler’s work with the visionary reveries of Thomas de Quincey, the influential author of Confessions of an English Opium Eater, Huysmans positions him as a bridge to the dreamlike works of symbolist artists such as Gustave Moreau and Odilon Redon. 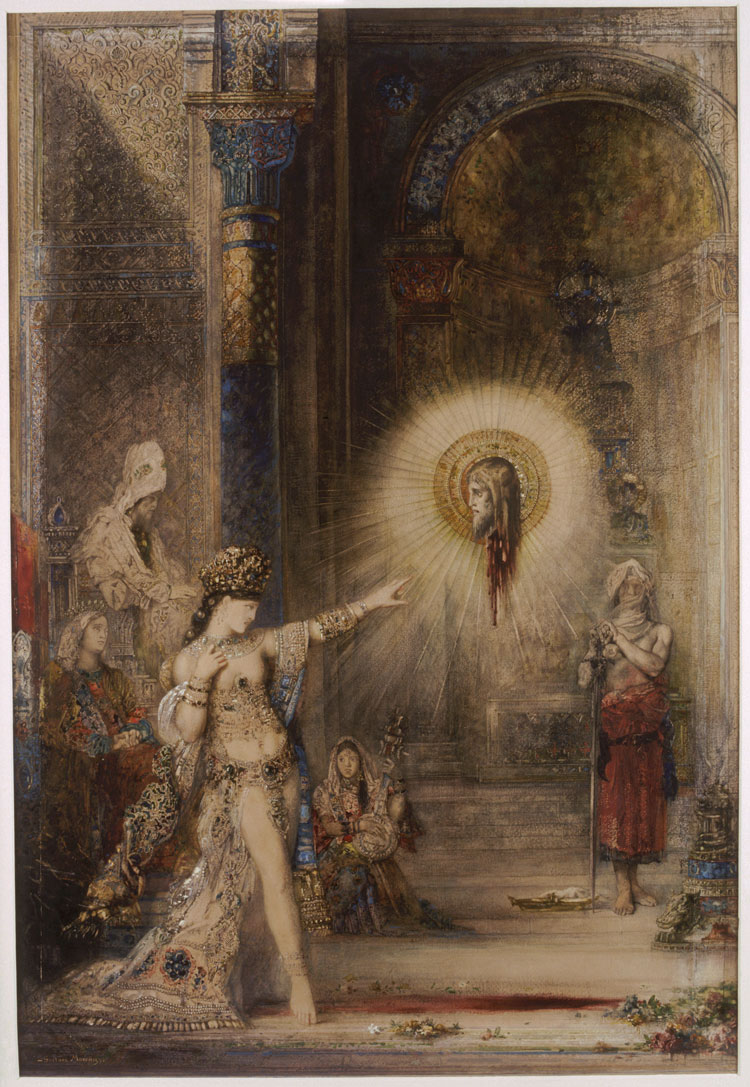 These two have a starring role in the exhibition’s second section, which Vezzoli has coloured red. The walls are adorned with photographic wallpaper evoking the house of the Italian poet Gabriele D’Annunzio, who designed his own home after that described in À Rebours. This room contains superb examples of Moreau and Redon, including the former’s unspeakably sumptuous Galatea (1880) and a broad selection of the latter’s phantasmagorical illustrations. It is also here that the exhibition’s previously tight focus around Huysmans’ writings begins to dissolve into something looser. There are fewer texts, so that pieces such as Jean Auguste Dominique Ingres’ Virgin Adoring the Host hang without explanation. Four works by Vezzoli that see photographs of famous dancers, including Ida Rubinstein and Isadora Duncan, adorned with embroidered tears allude to something of the fin de siècle’s commingling of pleasure and tragedy, but feel misplaced next to that era’s actual expressions. 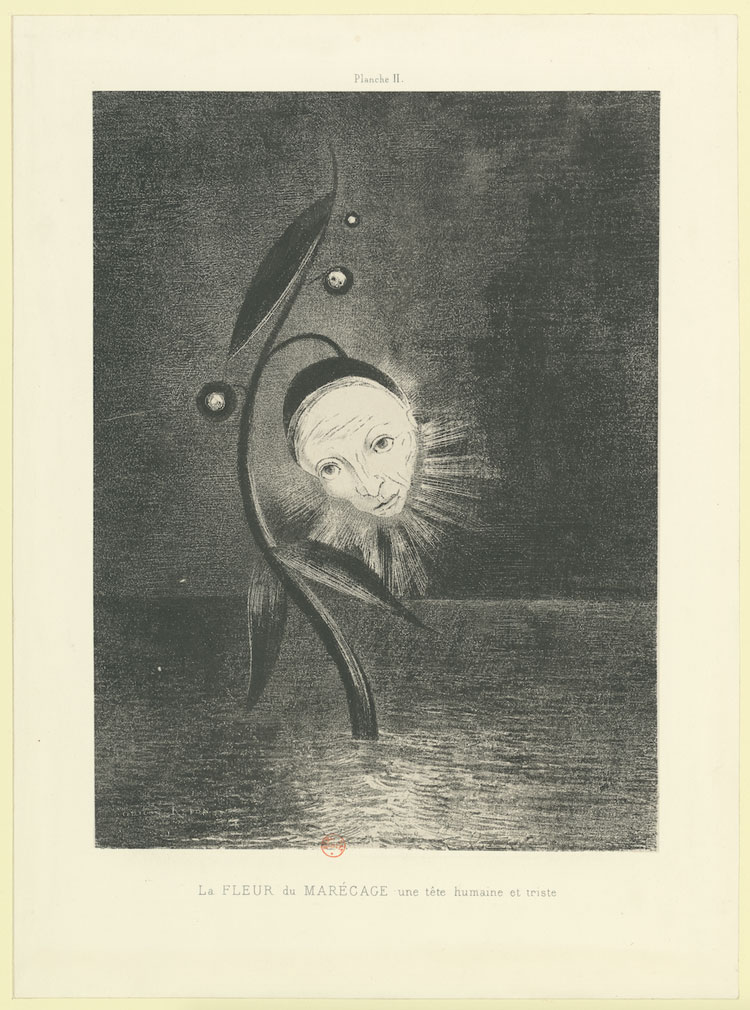 In his final decade and a half, Huysmans rediscovered Catholicism. A sequence of four novels fictionalised Huysmans’ own conversion, along the way interpreting rapturous passages on gothic and northern Renaissance art. The late essay Trois Primitifs (1905) describes his reaction to Matthias Grünewald’s Isenheim Altarpiece (1512-16), one of the very greatest works of the Renaissance. “It is as if a typhoon of art had been let loose and was sweeping you away, and you need a few minutes to recover from the impact, to surmount the impression of awful horror made by the huge crucified Christ.” 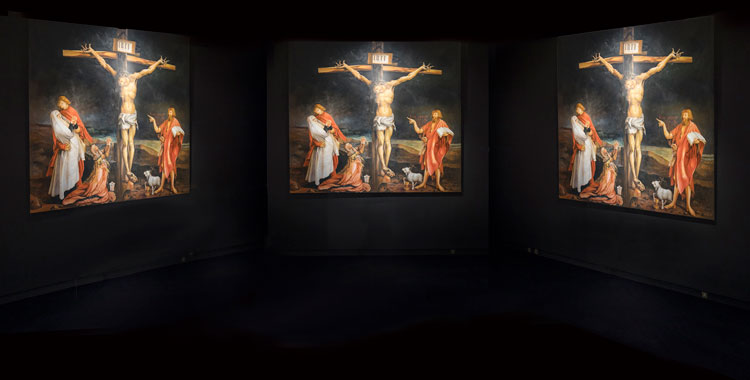 It would be a nigh-impossible task to recreate the conditions of Huysmans’ experience, or even those which greet present-day visitors to the altarpiece’s current home in the Musée Unterlinden in Colmar. But Vezzoli tries in the exhibition’s final chamber, devoted entirely to the glibly titled Jesus Christ Superstar (2019). Painted pitch-black and lit with theatrical flair, it displays three reproductions of the altarpiece’s central crucifixion scene. It manages to retain a glimmer of the original’s splendour while undercutting the cult of authenticity, tying together Huysmans’ faith with Des Esseintes’ preference for the replica over the real. But you may wish that the writer’s ardent belief in the unmediated power of art had been left alone. 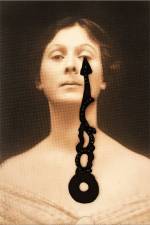 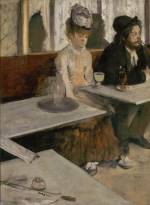 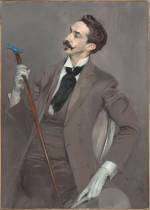 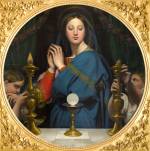