The 1973 coup in Tacla’s mother country and the brutal dictatorship of General Pinochet that followed underpin the artist’s work – and the seven paintings shown here depict real events, where protesters around the world have fought back against abuses of power 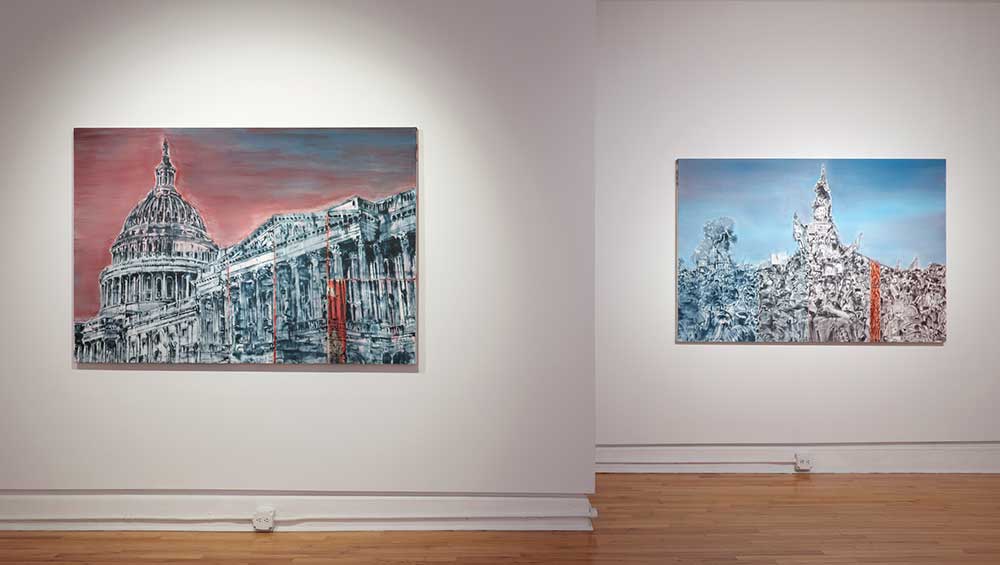 The Chilean artist Jorge Tacla (b1958, Santiago) left the city of his birth in 1981 to settle in New York. It was several years after the overthrow and death of President Salvador Allende in the 1973 coup led by General Augusto Pinochet. A devastating event that forcibly inflicted a brutal dictatorship on a country that had just a few years earlier elected a reform-minded, socialist government, it was Chile’s September 11, the fallout for ever embedded in the heart of Tacla’s practice and the nation’s history. His timely and absorbing exhibition at Cristin Tierney Gallery in New York – his fourth, curated by Christian Viveros-Fauné – continues to draw from that life-changing, heartbreaking history, bringing it into the present. 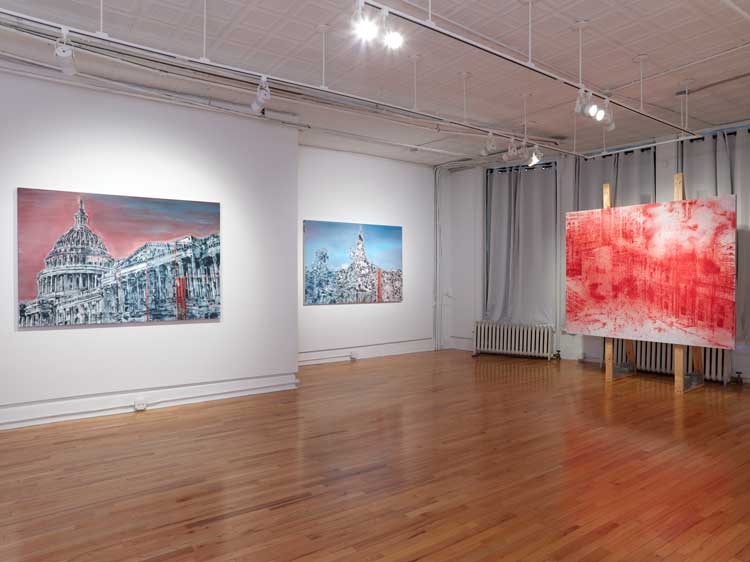 The picturing of landmark buildings and monuments scarred by violence is a Tacla hallmark, reprised here in the painting of the bombing of La Moneda, the Chilean presidential palace and the site of the overthrow. Identidad Oculta 163 (Hidden Identity 163) (2022), one of the works in this show, is painted in a concentrate of red with no other colour except for explosions of white, allowing no reprieve from thoughts of blood, of life, and, mostly, of death while simultaneously visually stunning, visions of horror conjoined with spectacle, as we in New York remember only too well. 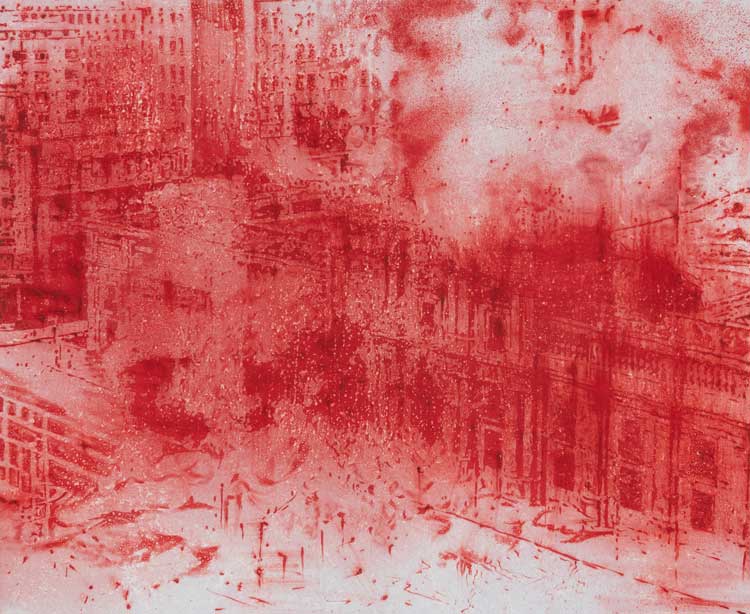 For this exhibition, however, Tacla focuses on protests, with and without architecture and monuments. Called Stagings/Escenarios, the word “stagings” rather than “scenes” chosen to translate “escenarios” made me pause. The word is more active, more activist in its implications than “scenes,” which, if a more direct equivalent, is also more neutral. Stagings suggests an interventionist, directorial stance, an agenda on the part of the artist, an action on the part of the subjects, raising the provocative issue of documentation versus art and the kinds of truth each dispenses, as well as what their respective accountability to the factual might be.

The installation is also part of the staging. Exhibitions, of course, always require some form of staging and, if paintings, they are usually hung on the wall. Here, indeed, five of the seven paintings are where you might expect them. But two have been placed on easels, as if Tacla is asking us to think about the contrast between the confrontational, traumatic subject matter and the consumerist display of high-end wares, like placing the dressings of the maimed on a velvet cushion to present to those in power, to prospective buyers of unknown intentions and affiliations.

Tacla’s images straddle the divide between the abstract and the figurative, the results toggling between the thematic and the specific. The works shown here, from three different series, depict actual events, most of them recent, inspired by the huge protest rallies in 2019-2020 that captured the attention – and the hope – of the world in the United States, Chile, Lebanon, Hong Kong, more. 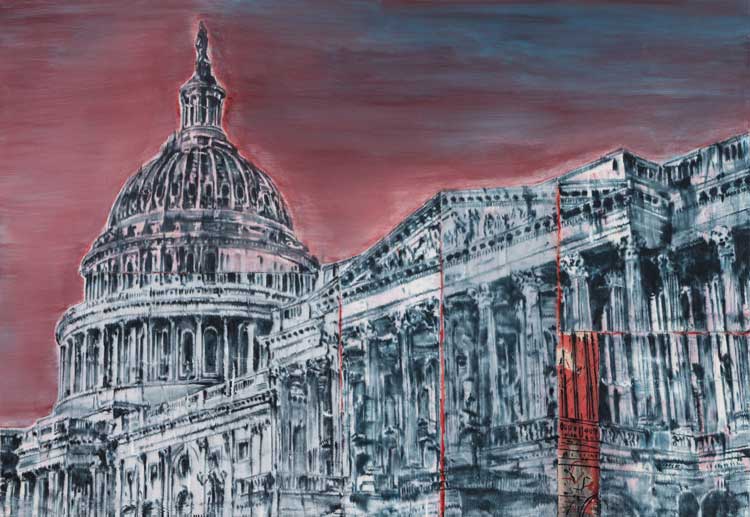 October 25, 2019 (2022), for instance, refers to the largest marches ever recorded in Chile as more than 1.2 million people voiced their anger and frustration over the country’s social injustices, linked to the protests of millions in Hong Kong in 2019 against the curtailment of their political and personal freedom, and to the massive demonstrations that are erupting everywhere, with increasing frequency. Injury Report (2022) could be seen as less specifically targeted, the aftermath of most protests (although it refers to the Chilean marches: 2,500 injured, not to mention those killed or jailed). And Identidad Oculta 160 (Hidden Identity 160) (2021) depicts the majestic plinth from which the equestrian statue of Confederate General Robert E Lee once proudly surveyed Richmond, Virginia (now hovering as a ghost above it), surrounded by the protesters who eventually compelled its removal. 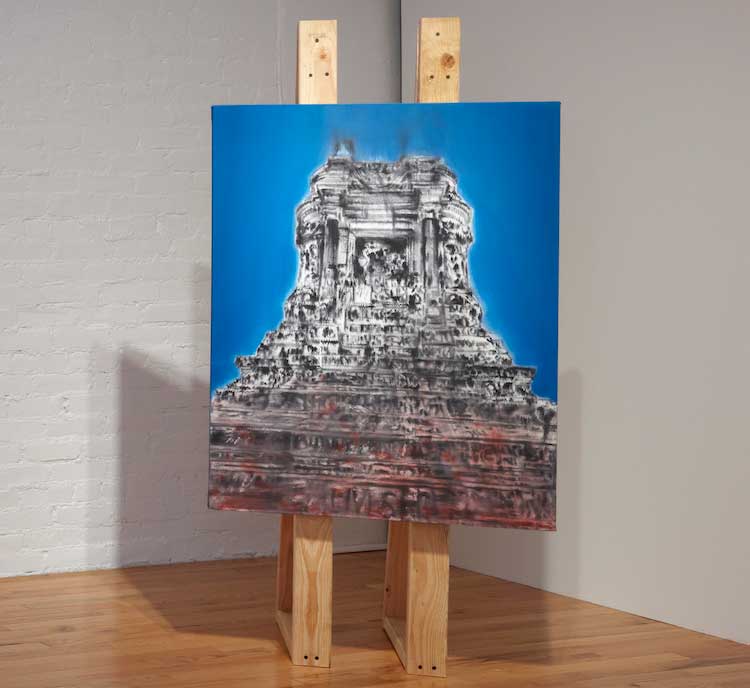 Tacla uses oil, sometimes cold wax, sometimes marble powder to build up richly sensuous
surfaces, his canvases more or less tonally muted – he once said that he thought of terror as monochromatic – his palette often depending on red, blue, white and grey. His brushwork, with its quickness of tempo, its splattered, splintered bursts, its accumulations, feels like the painterly equivalent of political and personal outrage, the sense of agitation kneaded into the medium. While these images might be easier to recognise than in other works, they are not rendered in detail, the pile-up of bodies or figures, masked, remain anonymous, undifferentiated, as if to protect the protesters. The dynamics of Identitad Oculta 160, say, stirringly translates the incessant surge of the multitudes pressing against each other, in tense opposition to the brilliant blue sky above them (a reminder of the perfect blue sky of our 9/11).

Stagings/Escenarios conjures the power of the people in the aggregate, but also their vulnerability as individuals, subject to retaliation, incarceration, and worse, something that Tacla understands, as he vividly, memorably argues his case as a fervent witness for human rights – and a more ethical, equitable, and saner world.