In John Hoyland’s paintings from the 1960s, thick crisply defined blocks of paint dominate the canvases. Over the subsequent decades the opaque impasto squares and rectangles began to dissolve into the drips, splatters and blobs of the background, taking on geometrical and circular shapes, and culminating – in sheer force at least - in the extraordinary bursts of colour and form of the 1990s. Now, in these paintings from the last two years, shape is disintegrated even further, sent backward behind layers of glaze or cracked surface, and leaving the circular blobs – or bursts – the only thing to rest confidently above the picture plane.

The catalogue begins with a quote from Hoyland on “Confronting Rothko’s Legacy”. The similarities are easy to see, with the eye drawn through the densely textured surfaces to linger around the internal depths of the canvases; emphatically not an art of two-dimensional design, but of a world of abstract shape and volume; “he painted zones of reality … Independent of signs, space existed before the beginning of form but retaining feeling as a living reality.”

But something rather British, almost pop, remains in these works, as if unable to take itself quite seriously enough to fully commit to Rothko’s mystical side. In each work – take When Time Began (Mysteries 11) for example – as the eye tracks around the three-dimensional depths, here following round the submerged black behind blue lines that ring the top half, it is suddenly jerked upwards by the exuberant explosion of a circle of opaque paint seconded in relief with more squeezed directly from the tube (here red in the bottom right corner). The sudden shock of these is almost comic, a reminder that this is not a new reality, just the physical stuff of paint on canvas. At the same time, however, the eye is led back out into the painting by the thinning splatter of opaque paint, which, as it gets smaller and smaller blends back into the main body of the work, and eventually leads into the depths again.

This tracking between surface and depth is fundamental to the experience of these works, and is one reason why they read so differently – in a sense so inadequately – in reproduction. Seen closely there are a strange multitude of surfaces and depths, created as the opaque, matt, gloss metallic and translucent paints are interlayered and spattered over one another (The metallic, the matt thinned acrylic, and the plastic-like pure acrylic all read as successive levels of upper ground). In some, such as Throw the Dice, the depth even appears in the thick opaque patches themselves, as the impasto blobs are streaked with swirling lines of other colours that seem to draw the eye around and in yet again.

Ultimately reaction may depend on how one feels about the pretensions, and the gentle probing of these pretensions, that underlie such works. Even just to hold multiple modes of paint and painting together in a single canvas is difficult, and while the initial result may be jarring, given time the experience could be said to be all the richer. Downstairs there is a small Hoyland work on paper from many years ago, though: more solid, with the rectangular shape not quite dissolved, but with hints of what’s to come, a nice reminder of earlier times. 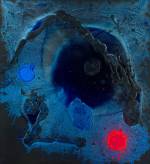 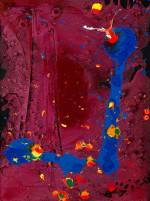 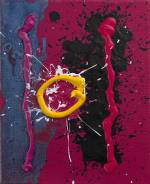 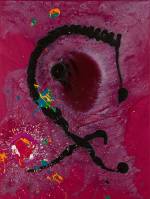 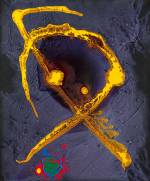