In the sitting room of a house in south London, Jefford Horrigan performed The Threshold, part of his trilogy Own Worst Enemy, commissioned by The Collective. This tenderly performed work was a masterpiece of alternative creativity

• See also, an interview with Paul and Midge Tanner, founding members of The Collective

Since graduating from the Royal College of Arts, Lejeune has worked for Channel 4, the Creative Campus Initiative and Transport for London, and now runs a gallery from her apartment in Peckham Rye, south-east London. She was recently awarded a grant from the Arts Council to fund a series of commissions titled Collecting the Ephemeral, which focuses on civic, private and university commissions, and Horrigan’s three-part work for The Collective, titled Own Worst Enemy, is part of Lejeune’s “private” Collecting the Ephemeral curatorial work.

Lejeune explains: “I have been talking to artists whose work is not necessarily object-based and I wanted to address those artists’ dissatisfaction with not having their work recognised. Commissioning is not enough – these commissions need to be remembered. Collecting the Ephemeral is a way of getting things collected and remembered. The idea is to work with people and places that collect so that you know the ideas and the works will be remembered.”

Lejeune carefully explains the different processes that Horrigan undertakes as part of his performance work. “There are different kinds of drawings – notebook drawings, score drawings, directive drawings – and then there are drawings that refer to the performance. Film and still images are also part of Horrigan’s work. Commissioning these works means you know that the ideas and the work (evidenced in these drawing and other image-making processes) will be remembered, they will exist in a particular place, and then artists and students can use those collections as a resource.”

I visited a private house in south London to attend The Threshold, the second in Horrigan’s Own Worst Enemy trilogy. The context: a long sitting room – sparsely furnished, back door open to the garden. The audience: about 30 in all, consisting of The Collective members, friends and a few select invitees, some standing round the far edge of the room, others clustered on a sofa and armchair. Horrigan enters wearing an overcoat and holding a carrier bag. Almost immediately, he is no longer Horrigan but, instead, a quite and somewhat mournful man, his coat too big, his face expressionless. He sits on a plain wooden chair, pulls a bundle out of the bag and unwraps a large plate from newspaper. He puts the plate on his lap and screws the newspaper into balls, which he throws into the fireplace.

Everyone sits still, watching this man. In this domestic setting, there are echoes of parlour games, but this is quieter, stiller – perhaps more like a theatrical pause between talking scenes on a stage. I am reminded also, as I watch this quiet man, of those few times that I have mistakenly witnessed someone undertaking a private ritual in their home. There is no embarrassment or shame here, but there is a hint of mournfulness. The sad man gets up from his chair and walks towards a woman. She steps around him, and I realise she is part of his performance. The man takes off his coat and puts it on the woman. Again, they step around in a slow dance. She gives the coat back to him, he walks away to his chair. A sharing of roles, a switching of gender: the isolation of being in a partnership? Perhaps these are suggested, or maybe they are interpreted according to the viewer.

The man has been standing motionless and expressionless. The woman and the man do the coat exchange again and then the man rolls back a small carpet, pulls from underneath it a pair of long, red gloves and puts them on – they fit exactly so that his arms seem to be painted bright red. Again, the two do the coat exchange and then the man rolls up the small carpet, slots the ends into the back of the wooden chair he’s been sitting on – and places a glove like a tongue poking out from underneath.

Like a tongue sticking out at the woman. “No, like a Chinese dragon,” my neighbour says. “Mournful,” reflects another audience member. “The monotony of relationships.” “The interchangeable possibility of gender.” “Some dynamic around relationship.” Had he been perhaps commenting on his interpretation of the house and its occupants? We discussed the implications of what we had witnessed and all had different interpretations of what we had seen, while Horrigan remained silent.

Such creative events, displaced from the usual context of theatre film or stage and so tenderly enacted, become dream-like in our memory, and it is to the credit of The Collective, the curator and the artist that these rare glimpses of alternative thinking and making can develop, be seen and will be remembered. Long may such facilities continue to allow for alternative creativity, and keep expanding boundaries for all of us to explore. 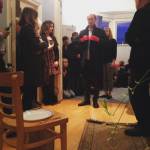