The Whitney Museum should set up a food cart and a postcard stand for the people who are streaming in to the Jay DeFeo retrospective (1929–89) – more particularly and pertinently, to its lynchpin, The Rose – as they would to view the fingernail of a saint, or to journey to Santiago.

The comparison is apt because there is much that is spiritual about this eloquent work. DeFeo herself, by all accounts, undertook her defining work as something of a pilgrimage, albeit into the recesses of her soul, embarking on the 12-foot high canvas in 1956 and coming to the end of the first phase after a full seven years. She still didn’t considered it finished, stopping a year later only because the work was removed when her rental was up.1

The very presentation by the Whitney, who acquired it after it had languished in the Pasadena Art Museum for 26 years (21 of those behind a plaster wall for safekeeping), is as a religious icon, fitted into a lightbox that is at once sequestered from and central to the related exhibition. The lighting does marvelous things to further coruscate surfaces that seem to have been attacked as though in a frenzy of fervour. It was moving to witness viewers marvel, approach cautiously, and ask the guard in hushed tones whether they might move closer, though there was no barrier to prevent them. I stood for a time after my own revelation to garner their comments: “It weighs a ton!” “it covered up the central window of her studio!” “They had to break the wall to get it out!”

None called it a painting, although that’s what it is, because so much paint has been layered on, gouged out, reapplied and hacked through as to create a thick wall relief that can call itself a sculpture.

The Rose is wondrous, an achievement, one could say, on the order of the great friezes of Egypt and Assyria, except that it is chiselled by a single artist, not incidentally by a woman, and takes off from a dialogue that is supremely self-referential.

At first, the curator Dana Miller informs us in the superb catalogue, DeFeo called it Deathrose, perhaps alluding to the “death rays” thrown off by its original off-kilter axis or the “death throes” awaiting its elliptical intensity. But as the canvas enlarged, she centered the focal point. Violently reshaped to absorb the lateral shafts of light that hit it from windows on both sides of her studio, the image gained the gravitas and radiance of an altarpiece, to transubstantiate into The Rose.

No one will leave it easily, or unaffected. Awe is not too large a word for the shift – not tectonic, but sudden – that occurs somewhere between a sharp intake of breath and feet that feel light on the ground as one greets this portrayal of all things elemental; sun, earth, rupture, rapture. The luminous shards retained on the retina hours later are just that, rays of opaque light that shoot out from the work’s center to illuminate the stages of intense effort and close observation that led to its redemption. For redemption is what this masterpiece achieves. Those who have not chanced to see it will correctly believe that, to the extent that pure expression of inner struggle for enlightenment can be achieved with paint, they have missed out on the ineffable.

In the sense that this single work holds the entire reputation of its creator, there is no urgency to wander through the 130-plus works that surround it. A good third of them, nonetheless, are critical to understanding DeFeo’s world, and hold marking rewards.

The first impression is of an overwhelming grayness devolving from the artist’s persistent use of charcoal, graphite and metallic powders, relieved only by charcoal photographs and works of plaster-on-cloth-wrapped repurposed wood that suggest time-faded fragments of antiquity. Even three months in the liquid light of Paris produced a series of grey paintings. But as the eye adjusts to De Feo’s palette, her vocabulary differentiates. It’s instructive to move in close and back away.

The Eyes, the artist’s own, formed of lines sharp as wild grasses, transform viewer into viewed. An image of a dental bridge, again hers, anticipates the astral symbolism of Ed Ruscha’s word-clouds. These, like the works depicting tripods, swimming goggles and wearable objects that are wired or welded from beads, wood, rhinestones, iron, gold, seed, silver (some grown into diminutive sculptures, like the copper disc that is captioned as inspirational for The Rose) point to an extreme otherness, as of an artist working apart. And yet DeFeo immersed herself in Renaissance and Baroque painting, as evidenced from her majestic Ascension, and was front right and centre of Beat culture, hanging out, entertaining and exchanging ideas with the breakout movement of her time.

So completely do we become immersed in her otherness that a moment of colour, quite late in the show, seems a mistake, work that crept in from the Pop exhibition downstairs. The urge to re-enter DeFeo’s unique world before leaving compels a return visit to The Rose, using the advance-retreat technique to voyage to and from its sun’s centre, raked there and back by its rays.

1. Its voyage to the Whitney is a heroic tale on its own. The removal itself, entailing breaking through the wall of her second-story studio in San Francisco, is the subject of a documentary on show at the Whitney’s Kaufman Astoria studios in New York from 25 April 25 to 12 May 2013. 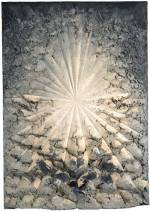 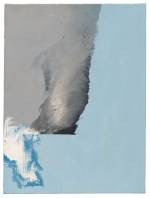