Jane Irish: ‘There is a critical strain about the anti-war movement that I want to commemorate, so I really think of my work as history painting’

Jane Irish: ‘There is a critical strain about the anti-war movement that I want to commemorate, so I really think of my work as history painting’

For the first time in its 200-year history, a mansion in Philadelphia is transformed into a major public art project by American artist Jane Irish. She talks about a career spent exploring anti-war activism 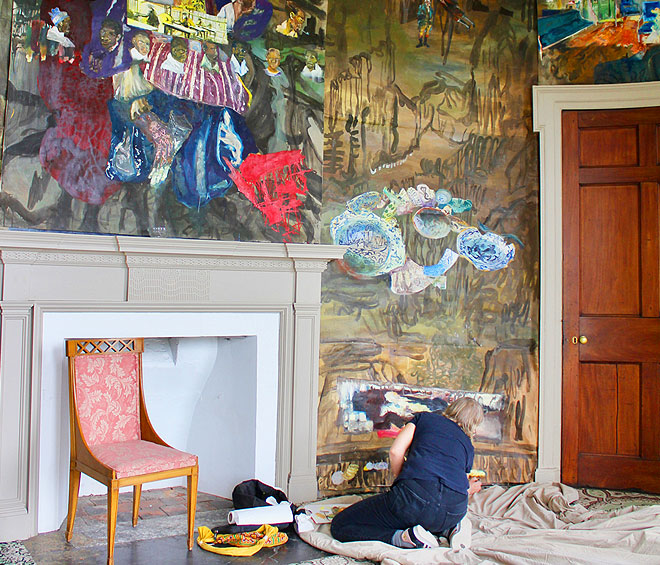 Situated in the grounds of Philadelphia’s sprawling East Fairmount Park, the storied Lemon Hill is currently the architectural site of an installation by Jane Irish entitled Antipodes. The artist (b1955), who lives and works in the historic city, has covered the walls and ceilings of the property with intricate images that emerge from draped muslin and linen bases. “I took the chance of working with distemper, which is a theatre paint I hadn’t worked with before,” Irish says. “The idea is to come in to an environment that’s not like wallpaper, because that’s what you expect. I wanted it to be more like tapestry.”

The artist’s narrative-based paintings reflect on the legacies of colonialism. In particular, Irish’s images respond to the Vietnam war. She first became aware of the conflict as a teenager, through her sisters, who participated in the protest movement, and it has since become an implicit part of her work. 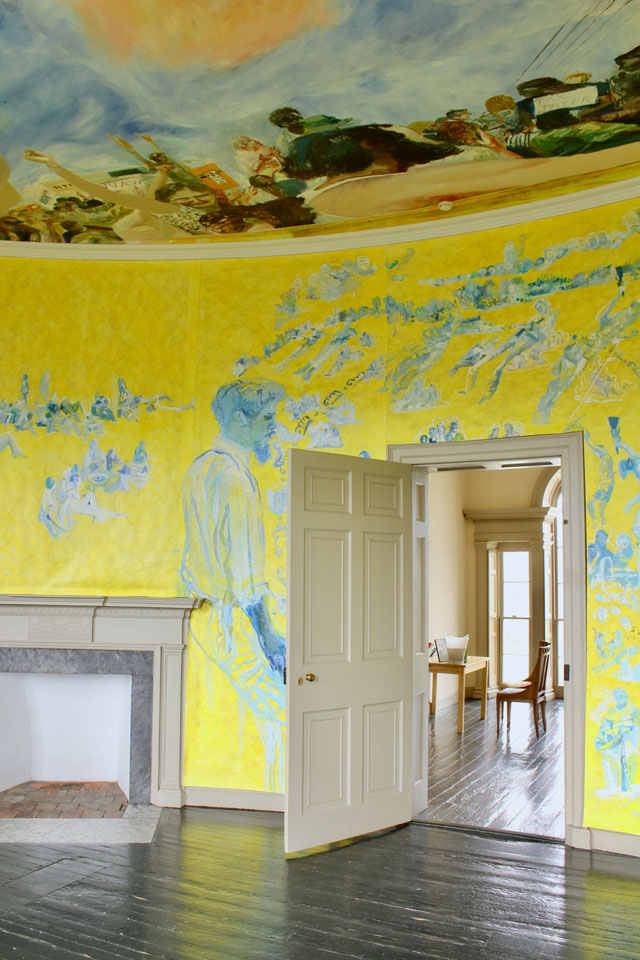 Irish’s project is organised around Lemon Hill’s layout, specifically the unique oval rooms that feature on the ground and first floors. These two spaces have been conceived by the artist as antipodes: the paintings in the first room are an amalgamation of events connected to the Indian Ocean, while the upstairs interior focuses on tales relating to Philadelphia itself.

Presented by Philadelphia Contemporary, in collaboration with three local partners, Antipodes underlines the relevance of retelling historical accounts as well as the accessibility that comes from showing art in untraditional spaces. “It is demonstrative of following an artist’s dream in collaboration with existing cultural entities to make interventions into daily life,” says Nato Thompson, artistic director of Philadelphia Contemporary. “This kind of gesture will continue as we grow as a cultural institution.”

To coincide with Antipodes, an exhibition of new, large-scale paintings by Irish, Architectures of Resistance, is on view at Locks Gallery in Philadelphia.

Allie Biswas: How did the idea of antipodes become the theme for this project?

Jane Irish: I had just been working on a series of paintings that were based on Edgar Allan Poe's Eureka and he mentions that word in the poem, I think in terms of nihilist philosophy. Eureka is about the Big Bang – his theories on the cosmos – but the form of the essay is about the universe continuing to expand and contract. This guiding simplicity is behind the project; this idea of antipodes being two opposites on a globe. So, the project has this minimalist structure. But my nature is to have lots of narratives, so it’s a very strong structure for relaying what my thoughts are. I think this is quite unusual for public art, in a way. 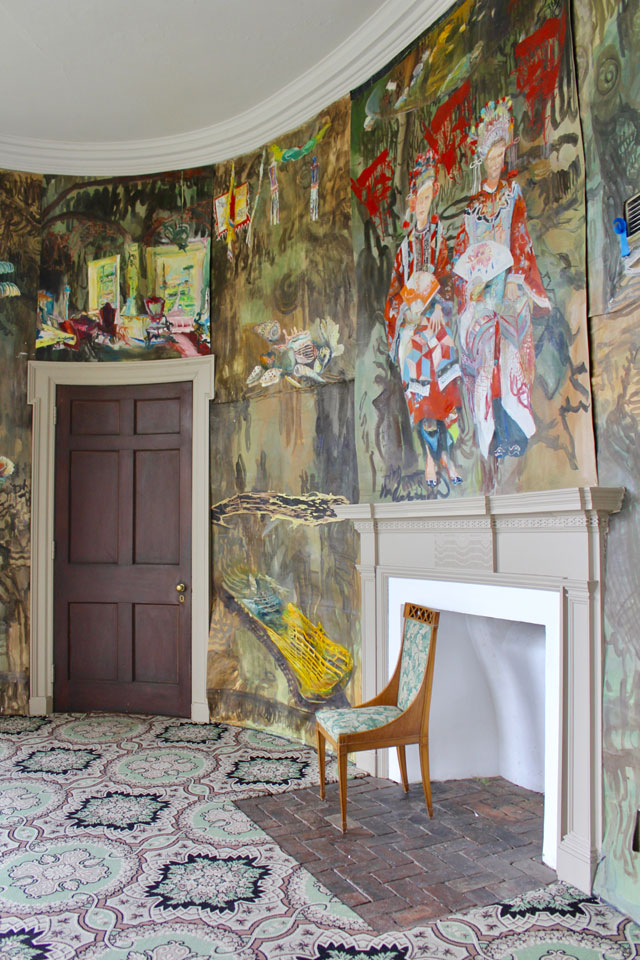 AB: What about the location of Lemon Hill? Had you intended to carry out a project within this site?

JI: Harry Philbrick, from Philadelphia Contemporary, had come to my studios a few times. I had put up a big stage set to paint from, kind of like Thomas Demand or something. I hadn’t really had another person visiting while I was doing that; to have more than one person in the painting, as it were, within this interior stage setting, was really exciting for me. We talked about this, and then later we ended up visiting some of the historical houses in Philadelphia, which are open during the holiday period in December and January. It just so happened that they had recently deaccessioned the furniture at Lemon Hill so it seemed more open as a space. Plus, the beautiful geometry struck me.

AB: Was it easy to gain access to the site, on the grounds that you would want to install your paintings in such an intimate way?

JI: Sunanda Ghosh, who is head of external relations at Philadelphia Contemporary, had worked with the Fairmount Park Commission before, so she knew quite a few people there. It was really this community of people that made this project come into being – even as far as the consultant I worked with, who is a historic preservation architect. He had lived in the house for 10 years, so he knew how we could temporarily hang things without hurting the original structures of the house. Small details like that allowed this project to happen. 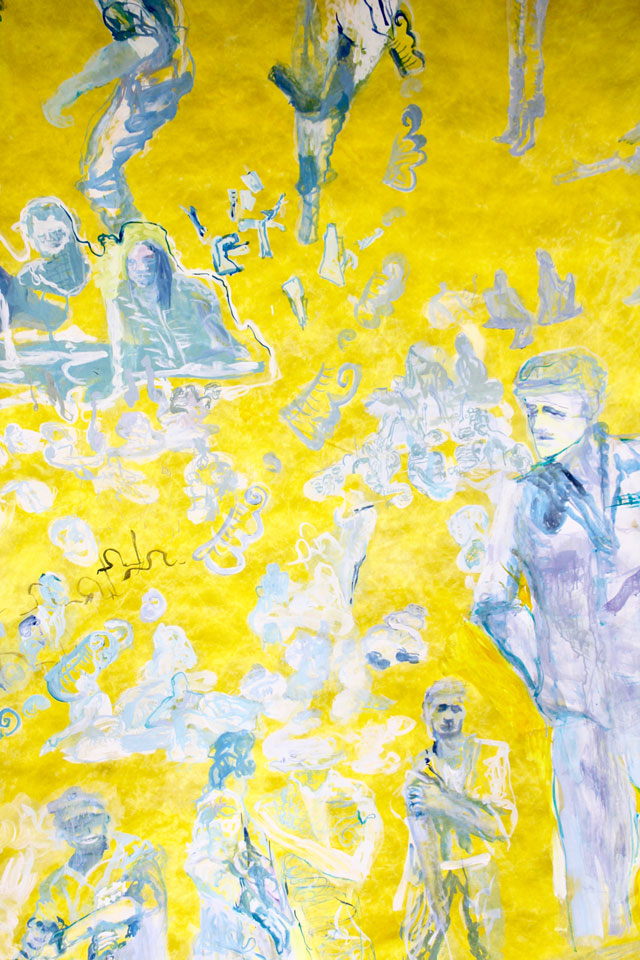 AB: Antipodes continues your interest in anti-war protests and the violence of American conflicts overseas. What initially drew you to these subjects?

JI: I graduated from high school in 1973, so I’m a little young [for the time], but I knew enough as a young person to know what the images of the war meant – because I was alive then. I also had two sisters who were part of the anti-war movement, and I looked up to them. My work has really always been political; it was actually environmental at first. As a starting point, I was painting pictures of people I admired: Mario Savio, Joan Baez, the Black Panthers. Through those works, I was invited to do a small museum show at the Pennsylvania Academy of the Fine Arts in 2000. At that point, WD Ehrhart – a poet and historian in Philadelphia who also served in the Vietnam war – came to my studio to look at the imagery I was making, and he told me things that I wasn’t aware of. From that moment, he was very inspiring, telling me things about the anti-war movement in Philadelphia that I didn’t know. I had been looking for a local history that meant something global. So, I learned about this time through my artwork. I feel that the more I got into it, the more I realised that, for me, this was about being an artist in the sense of being a heroic resister. I thought that this was a history that should be told, as well as a metaphor for being an artist. Now, it has become cosmic; I'm older, so mythology seems relevant now. 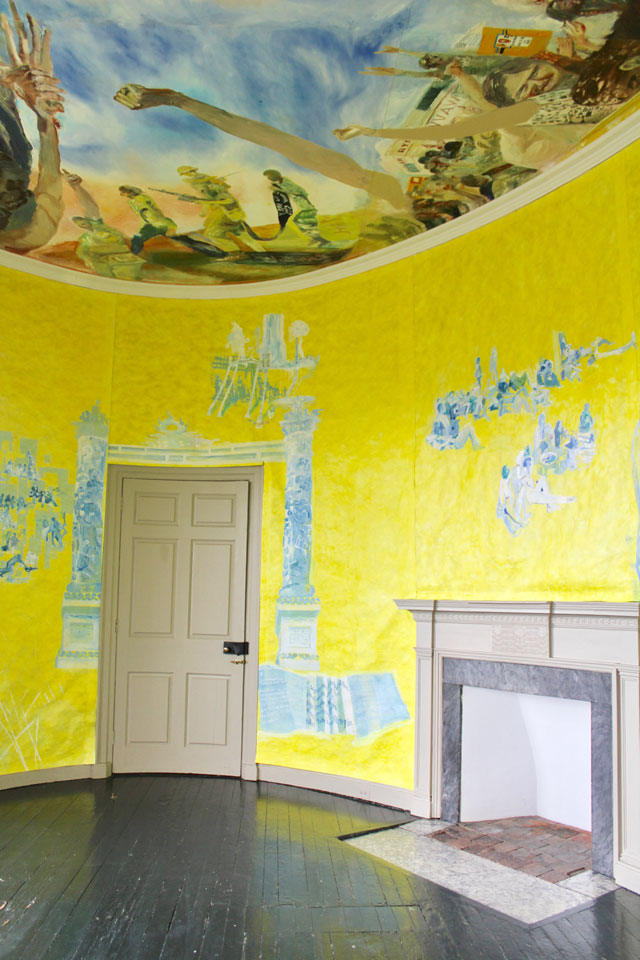 AB: Other than your contact with WD Ehrhart, had you been communicating with other veterans?

JI: Yes, they actually started coming to my shows, so I was able to hear more oral histories. Then my subject matter broadened into this French Indo-Chino period. I started to understand this whole period up to the war and after it. I just stuck with it. I guess it has been 20 years now that I have been painting about Vietnam Veterans Against the War.

AB: The images depicted in the first room make reference to Vietnamese culture as well as water scenes, which you connect to the Indian Ocean, and its role within this colonial period. What are your own experiences of Vietnam?

JI: I first went to Vietnam in 2008. It was an extension of trying to getting to know writers there, and I also ended up being around many artists. I have visited the country on three occasions, for a month each time. I always come home with 20 paintings. So, in Antipodes there are motifs from those experiences, such as the temple in Hanoi or Vietnamese ceramics, which I study. The ceramic works often show shipwrecks. At that time, Vietnam was making ceramics for Egypt and Africa. That was its trade – it wasn't controlled by European trade. The people depicted are actors in the theatre in Vietnam – they look like royalty, but they are actually actors. There is the conquistador character, someone who would have been sailing through the Indian Ocean, and some images from Amistad. I came across some beautiful drawings of the defendants at the trial, which I worked from. It was a way for me to create a projected trajectory towards freedom. 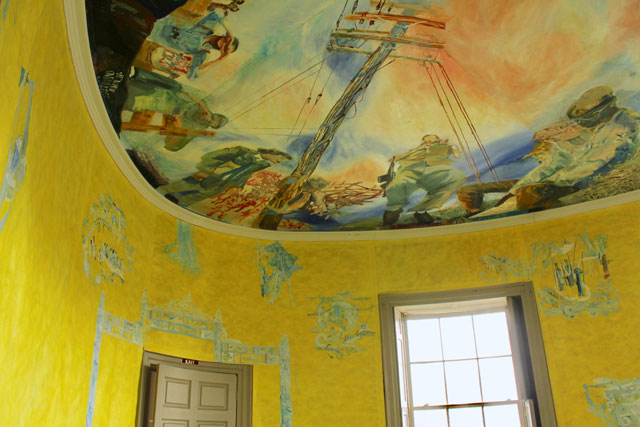 AB: You also make reference to the Paris foreign mission.

JI: That’s the other strain in here, the Catholic church sending missionaries to Indo-China. The reason I got to those figures is because a man who was teaching at the University of Pennsylvania is the grand-nephew of Théophane Vénard, one of the missionaries who was beheaded. He actually goes back to a small village outside Hanoi every other year and they celebrate his lineage. So, you can see this image of Vénard that I have included, as well as other similar figures from this period. The idea is that the Indian Ocean is like the colonisation of religion.

AB: The room upstairs, that you present in opposition to the downstairs space, focuses on Philadelphia. What was your starting point for the history that you have depicted there?

JI: I have been painting about this particular anti-war period – of the mid-1960s to 1975 – for a long time. The American soldiers who came back from Vietnam banded together [in 1967] to form Vietnam Veterans Against the War. I think they became the strongest as a group after the Kent State incident [when four students were shot dead by national guard troops in May 1970 when protesting against the bombing of Cambodia by US forces]. They realised that the war was happening in their own country now, and that they could do something about it. When I first met WD Erhart, he told me that one of the images I had painted was from a Vietnam Veterans Against the War march that took place from New York City to Philadelphia in 1970, on Labour Day weekend. I painted on this subject for quite some time. In Antipodes, you can see some of the leaders of that march, who included John Kerry and Scott Moore.

AB: What about your exposure to original photographs from the time? You mention your friendship with Tony Velez, the renowned photographer who served in Vietnam and taught photography at Kean University.

JI: I knew Tony for a long time. He passed away [in July 2016] and I went to see his family last summer. They let me look through a lot of the negatives and slides. Some of the imagery in my work, I had been working with for a long time, but some of it came into being after seeing Tony’s photographs. There’s another photographer called Sheldon Ramsdell, who was important in California, and was also originally with Vietnam Vets Against the War. I have tons of his photos. I think that you do need images to work from.

AB: Were there any other sources that you turned to when carrying out Antipodes?

JI: We had these great architectural drawings of Lemon Hill to work from – which I did, when I painted all these paintings in my studio over the course of seven months; the paintings were not made on site. If we think of the house, of its decoration, as a sign of where our culture is at, then it’s an expression of truth. But what if that kind of thinking was about not about looking backwards? When you go into these kinds of houses, there is a lot of heroising that is done – of making the colonial period heroic. I thought, what if we stopped that? 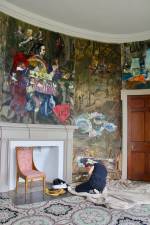