For her first solo public exhibition outside the US, the artist shows a sculptural installation and six new large-scale paintings, which are like painted diaries of her visual influences 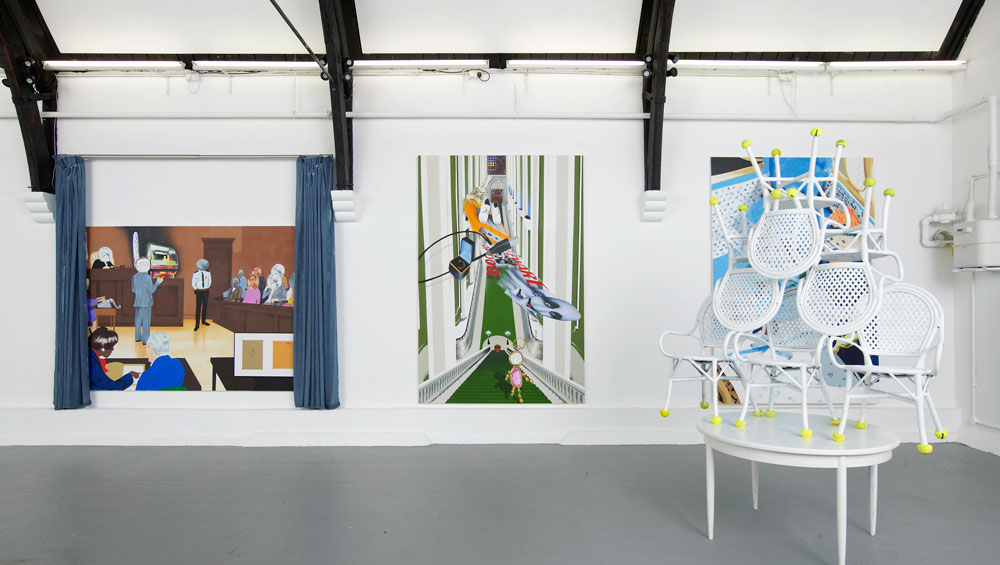 Jamian Juliano-Villani’s paintings are complex contemporary collages that collate memories, objects and dreams. Each work tells a story of a moment in her head where there is a collision of visual information, all processed through the painting and set free.

Juliano-Villani, who was born in 1987 in New Jersey, and now lives and works in Brooklyn, uses a projector on wheels to position images of light across canvases, painting from the shapes using acrylic paint and an airbrush. The technique allows her to resize and layer images while maintaining their forms creating the collaged effect. She admits she is impatient and uses a hairdryer to speed up the drying process so she can layer on more paint. Her technique is fast-paced, with no preparatory drawings and decisions made by instinct. Typically, one painting can take anything from two days to six months.

She learned the technique for using acrylic paint and an airbrush by watching YouTube tutorials. She likes the symbolism of the medium – contemporary tools used for efficient communication to the public on a mass scale. She also works with tools such as sponges and toothbrushes, believing that no style of art is better than another. Her technique is about communication in the clearest of terms, and her subject matter takes precedence.

For this reason, cartoons, which she describes as populist and democratic, have always appealed to her because they have a direct way of speaking that is accessible to all. Juliano-Villani’s artistic influences include cartoonists such as Mort Drucker, Ralph Bakshi and Richard Corbin, whom she looks to for their confident and direct vocabulary. The smallest work in the exhibition is a black on white portrait, a sketchy caricature of a male face. She uses the language of a cartoonist, yet she also skews the lines, adding her own surreal effect to the work.

The images she draws from – photographs, comic books, cartoons, pictures taken from the internet, films and video games – are images we usually glance at only cursorily, yet Juliano-Villani eternalises these passing impressions into paint. She does not elevate painting to the status afforded it by the art world, however: in her vision, these images remain cursory as she discards the next finished painting for a new one, adopting a flippant and distracted attitude to her own work.

As a result, strange narratives emerge, telltale of a moment in her life and, consequently, her personal history seeps through the works. Stick Drawing for Help (2016) shows a portrait of Juliano-Villani herself sitting on the side of a bed, long brown hair, wide brown eyes cast down, and her bare feet placed on the floor where a sapling is growing up between her toes. While not all the works are direct portraits, they show portraits of objects that are self-referential. In My Memories Projected in the Hallways of the Titanic (2016), her orange LaCie hard drive swooshes through a cathedral with other objects, including a pair of trainers and an empty jewellery box for a ring. The hard drive is the vault containing her personal history – her work, photographs, ideas and memories.

The layered nature of the works allows her to obscure herself somewhat, confusing the viewer with an overload of visual vocabulary until the works become kitsch, dramatic and often dark. Objects seem always to be on the verge of explosion, destruction or demise, experiencing a pulse of adrenaline before they plummet. In Drive Thru Arlington National Cemetery (2016), a hybrid animal/human being is about to crash in a car, and in Law Talk (Part Two) (2016), a jury gathers in a courtroom where a jukebox is on the stand.

That same jukebox appears in the exhibition itself, as the sculpture Same Time Next Year (Part One) (2016), a customised 1955 J-L Seeburg jukebox, which when pressed plays a strange unnerving sound like a television playing on loud, and a curtain opens to reveal one of the paintings. The sound is a recording of the voice of Juliano-Villani’s mother, edited so that it is distorted into a blur of sound. It is a satirical take on the wave of YouTubers making homemade videos of Autonomous Sensory Meridian Response – sounds that supposedly provide a sensory stimulus that relieves anxiety and stress.

Juliano-Villani’s sound, however, is stress-inducing. It is loud, unrecognisable and, like many of her paintings, presents contradictions. Throughout her work, emotions are conflicting; the bright colours and jovial cartoon-like objects present a carefree happiness, yet unhappiness, confusion and angst arising from the depths of her thoughts permeate. The works are slightly exhausting to look at. The artist is like a self-prescribing therapist let loose with a how-to-book, using her art to process her overloading thoughts.

The paintings contain many references to Juliano-Villani’s American nationality from the classic jukebox to the American flag on the silicon hat of a swimmer. Perhaps these symbols seem more potent here because it is her first solo public show outside her home country. Her brash, kitschy style is a reminder of the confidence of Mike Kelley, whom she references as an influence, and Jeff Koons, both artists who have raised pop culture to the status of fine art, using a palette of excess that borders on being grossly uncomfortable, a path that Juliano-Villani follows. Her work reflects  living in a video-based, internet-obsessed generation with an entitled ease to appropriation. This is not a criticism – it is a fascinating time to be alive and Juliano-Villani reflects it well: it is just that, sometimes, it can be tiring, and her paintings make it more exhausting still.

While the paintings may be a form of therapy for Juliano-Villani, they are not for anyone else. She has a strong, practised grip on the composition of assorted images on the canvas, bringing dynamism, emotion and a smoothly arresting painting technique. The works are charming and murky at the same time, and hold power over the viewer to confuse, humour and challenge, yet in an era of personal overexposure, they also feel somehow narcissistic and, despite the cocktail of visual tropes, a bit textbook for today. Nevertheless, it will be exciting to see what Juliano-Villani does next. 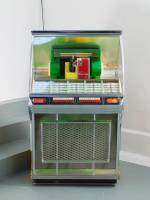 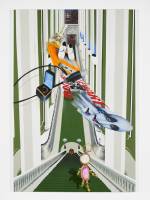 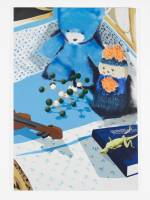 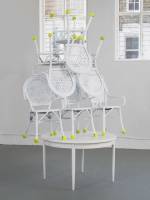 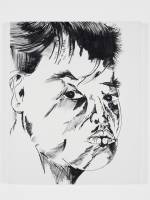