Jake Chapman: ‘Show me a Hitler and I’ll draw on it’

Jake Chapman: ‘Show me a Hitler and I’ll draw on it’

Having unveiled the sinister Sturm und Drang at Ekebergparken Sculpture Park, Oslo, one half of artistic duo the Chapman Brothers discusses the merits of artistic thievery, the definition of beauty, and Adolf Hitler

When property developer Christian Ringnes first presented his plan to convert 63 acres of Oslo’s public woodland into a sculpture park in 2003, he was met with widespread criticism. The public were sceptical of Ringnes’s true intentions, questioning the impact the proposed regeneration would have on one of the city’s most beautiful rural areas, and exactly why, considering the lack of tax incentives, a prominent figure would choose to invest such a considerable sum in what was, essentially, a publicly focused non-profit-making enterprise. Doubts were also raised over Ringnes’s curious insistence that the park should stand as a physical “homage to femininity”.

Despite this continued public dispute, Ringnes’s formal offer of a donation to the Oslo municipality was accepted in 2011 and the Ekebergparken began to take shape. Certain allowances were made and rules set down to safeguard the project’s initial pledges. An art committee was set up to select classical works from Ringnes’s own private collection, acquire modernist and contemporary sculptures, and commission site-specific works for the park. The committee also moved to redefine the initial proposal of an “homage to femininity” to the slightly more accommodating, yet still somewhat curious, “femininity in all its facets”.

Since its official launch in 2013, it is safe to say that Ekebergparken has met with fairly universal acclaim. According to Ringnes, the park now boasts upwards of half a million visitors a year and houses a varied collection of 34 sculptures from the likes of Salvador Dalí, Pierre-Auguste Renoir and Auguste Rodin, to more contemporary figures such as Louise Bourgeois, James Turrell, and Sarah Sze.

The three latest additions to the park demonstrate the ambitious intentions maintained by Ringnes and those at Ekebergparken: Fernando Botero’s Reclining Woman (2004), Damien Hirst’s Anatomy of an Angel (2008) and Sturm und Drang (2014), a work by British artists Jake and Dinos Chapman, who caused controversy in 2008 when they exhibited a series of edited paintings by a certain Adolf Hitler. Based on an etching from Francisco Goya’s 1863 Disasters of War series, Sturm und Drang is a work of weighty solemnity and subtle humour. While the maggot-clad skeletons that hang limp from the severed bough of a bronze tree challenge our human impulse to ignore the looming presence of death, the bronze-cast, joke shop paraphernalia from which the sculpture is formed interrogate whether materials that are essentially un-artistic and frivolous can elicit an emotional reaction from a viewer.

These coexistent states of earnestness are recognisable in Jake Chapman himself. When talking about the practice of his and his elder brother Dinos, with whom he has been collaborating since 1991, Chapman fluctuates between states of light-hearted facetiousness and damning sincerity. Within the same breath, he can allude to the fictional “little children dressed in funny gowns” that live below Sturm und Drang, and condemn art works that satisfy already established ideas as valueless.

Transcribed verbatim, these constant fluctuations in tone lose a degree of emphasis, but it is my hope that you will be able to interpret them to an acceptable degree. For while unsettling, ultimately, it is this delicate balance of flippancy and abrasive candour that not only defines Chapman himself, but also births the oft-confrontational works that he and his brother have been so committed to for so long.

Harry Thorne: Tell me what you were trying to achieve with Sturm und Drang.

Jake Chapman: We’ve had an interest in Goya for a long time. We think that his work is institutionally framed by the idea that it has something positive to say about the world, and we’re interested in trying to undermine that proposition. One of the ways in which we decided to test this, or at least play around with the idea, was to remake one of Goya’s etchings, Great Deeds Against the Dead, which is taken from the Disasters of War series. We reconstructed it with anatomical elements from joke shops that had been cast in bronze, in order to see if it could provoke any of the original feelings of empathy on the part of the viewer. It’s about testing the capacity of something impoverished to somehow capture empathetic responses from humans.

We’ve made coloured versions of Goya’s works before that have been quite garish – this is the more Prada version.

Harry Thorne: You have talked about the idea of the sublime in relation to the work.

JC: It’s less an idyllic sublime, more one that is riddled with the idea of the death drive – which is loosely concerned with the expression of beauty before death. It’s driven by the idea that in the moment of considering one’s own cosmic significance and therefore insignificance, one might have a slight feeling of pleasure.

HT: That self-awareness of one’s own position almost harks back to the Kantian sublime?

JC: Absolutely, it’s both a Kantian and a Freudian position – that almost anxious pleasure felt upon total realisation. It’s a kind of comprehension of infinity, being compelled towards something beyond death. At that point, infinity as matter disassembles into a kind of mess: a big, limitless, volume-less mess.

HT: With its basis in a pre-existing etching, Sturm und Drang riffs on several of your previous sculptures and paintings, those that take original artworks and “adapt” them.

JC: Well, all works of art overlap, don’t they? I don’t think there’s any work of art that doesn’t look like another work of art: the only difference is that we’re probably a little bit more explicit – and I think that’s OK.

A language is a language. In order for us to be able to understand anything, we need to have familiarity with the terms, and I believe that art as a language does that. Sometimes the confusion with works of art is the presumption that, first and foremost, their job in the world is to establish themselves as completely original objects, but that doesn’t make sense. If we are going to understand a work of art, then we have to understand the language that has delivered that work of art, or at least the history.

HT: Which of your adaptions do you believe has been most successful?

JC: The ones we did on Hitler’s paintings are definitely the funniest, even if it did take us about six months to take them out of the crate when we got them – it was like The Temple of Doom.

The idea that you can undermine the latent pathology of a Hitler painting by simply drawing rainbows on it is just genius really.

HT: Do you think that you will continue this idea of appropriating existing works?

HT: What did you think when you learned that Sturm und Drang was to be housed in the Ekebergparken Sculpture Park?

JC: I was very happy. I was joyful. I did a back somersault and a double flip.

When making art, it’s best to limit one’s ambitions, if only for the sake of avoiding that idea that art should have to answer certain questions that it shouldn’t have to answer. We always try to hardwire our art so that it works within the confines of itself rather than having to draw on its surroundings. I think we are slightly suspicious of considering art as a site-specific entity. The problem with site-specific works is this: where do you draw the edge of the work? Where does the work begin and finish? The implication being that, if it doesn’t finish anywhere, then you’ve rendered the whole world a work of art, which for us would be a crime.

We quite like the idea of works of art existing in galleries because then you know where they begin and where they end. We don’t want to inflict them on the world, because we don’t really like the idea of aestheticising the world. Once you start using aesthetic terminology to describe the world as being some kind of open vessel for site-specific works, then you’re in for a whole world of fucking problems.

HT: But surely you do aestheticise the world to an extent, because whatever you produce within the confines of your studio will eventually be cast out and circulated, and it will affect people accordingly. Are you not implicit in that very act?

JC: Yes, in a sense, but you have to try your hardest to limit the conditions in order to assure that a work can’t bleed beyond its fixed boundaries.

I think works of art have to be limited. They have to be confined to indoors. [Laughs]I definitely feel uncomfortable with the notion of perceiving works of art that are outside as limitless objects of aesthetic fascination because, as I said, then the world gets described as a work of art, and that for me is a very frightening prospect. The problem is that everything then gets beautified.

HT: But that’s what we do as human beings, isn’t it? We beautify?

When a work of art has something positive to say about the world, it’s normally because it’s soliciting an aesthetic conclusion to its existence, and normally it’s actually willing someone to say it’s beautiful. What happens if we decide that works of art aren’t beautiful?

HT: But surely to define something as beautiful is an incredibly subjective act?

HT: I believe it is, because while it may align closely to aesthetic convention for some, for others beauty can be destruction and anarchy.

JC: I think that’s optimistic. I think beauty is a very coerced and very tutored term. There’s no a priori notion of beauty that we don’t learn.

Beauty is a universal term; it’s a transcendent term. Yes, all words are universal in as much as we can all understand them, but beauty has a very specific transcendental meaning to it. We can all agree that something is beautiful because it appears to us in a phenomenologically similar way.

To be really ridiculous: if you get 20 people in a room and present them with six objects, one being a piece of dog shit, one a Rothko, and another being a couch, you can bet good money that the people will be pointing at the Rothko. Just as if we stood here and pointed to this view of Oslo: people would say it was beautiful.

HT: But I still maintain that what I say is beautiful, you may say is dog shit, and vice versa.

JC: Well that’s relativism, and a relativist wouldn’t use the word beauty, would they?

• Sturm und Drang by the Chapman Brothers was unveiled at Ekebergparken Sculpture Park, Oslo, Norway on 28 May 2015. 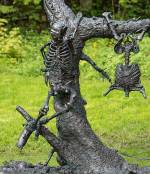