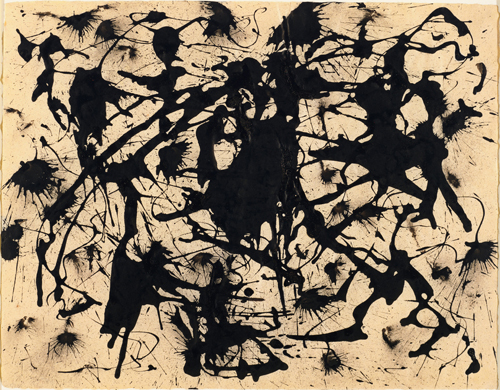 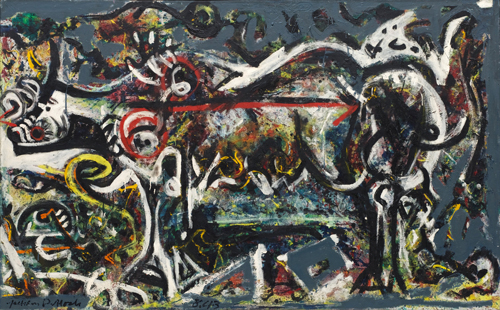 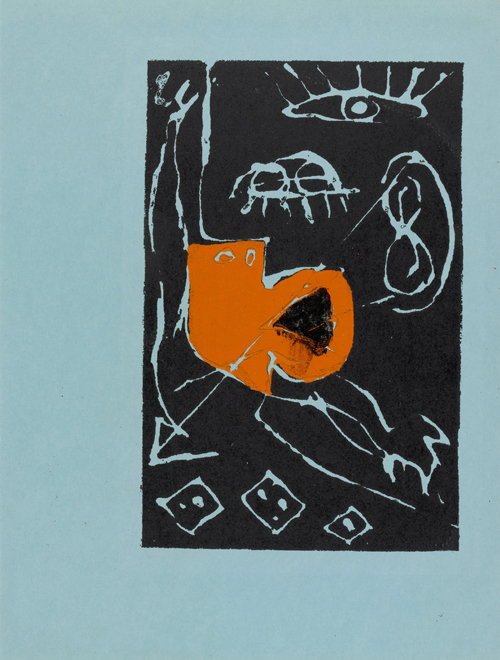 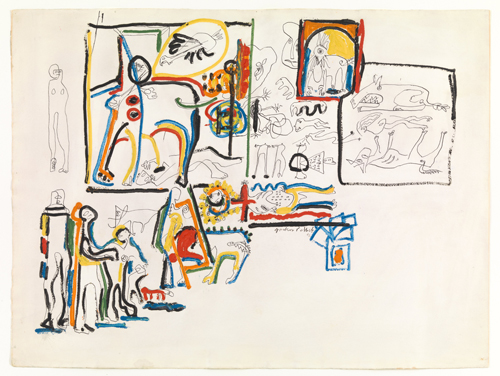 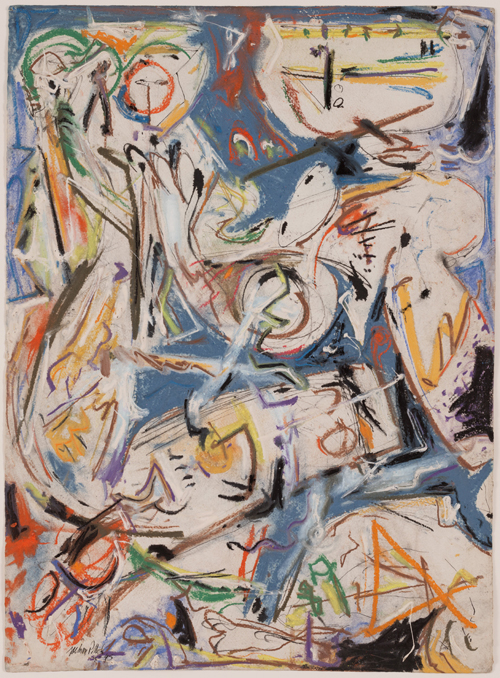 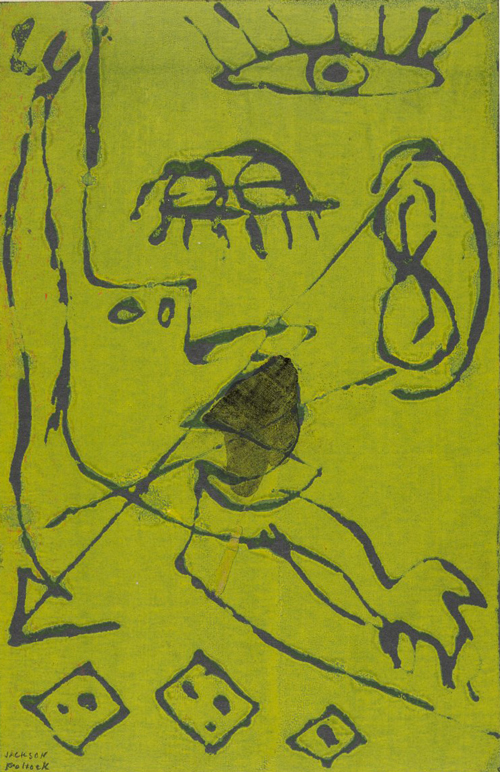 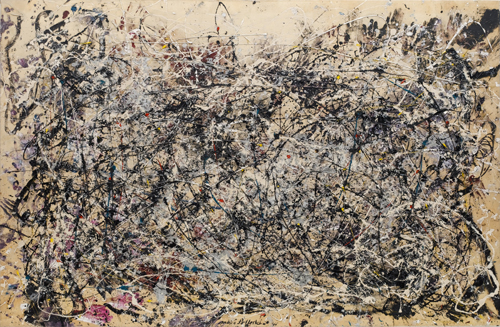 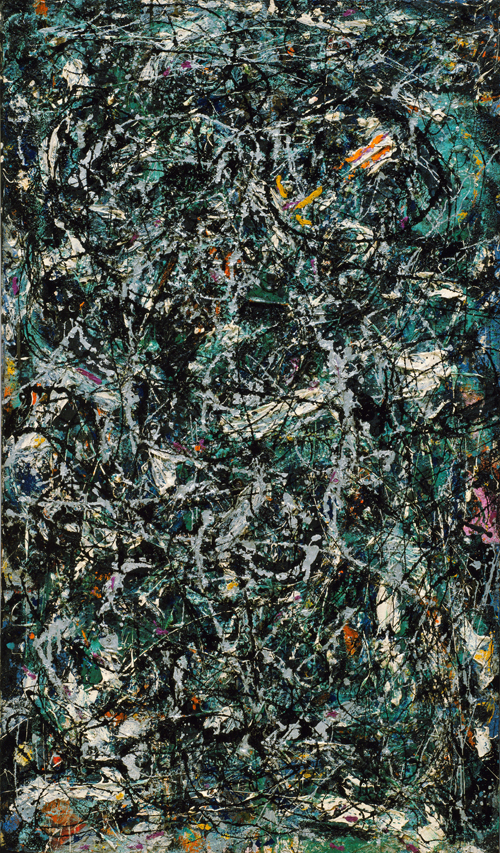 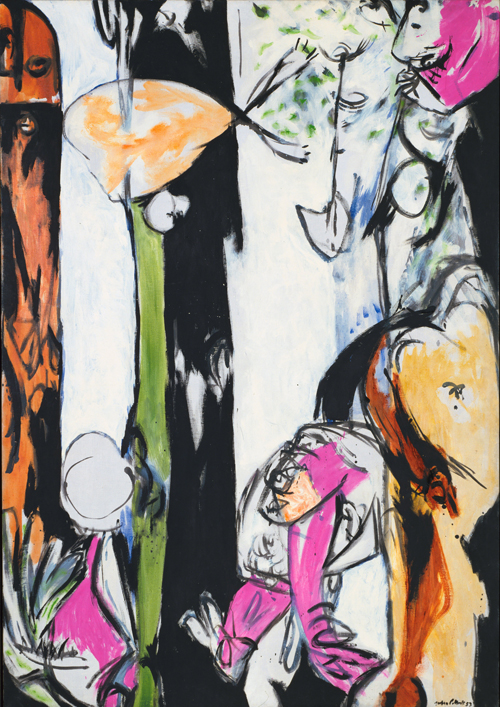 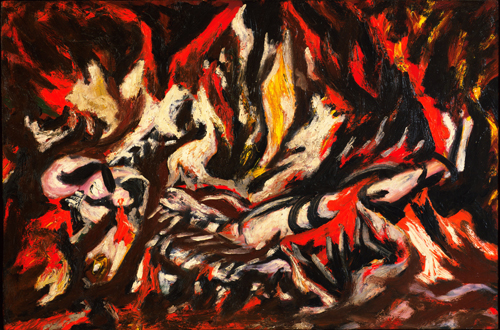 A small but exciting show of Jackson Pollock (1912-56) at the Museum of Modern Art is a good reminder of the wealth and importance of the museum’s collection. Competently put together by Starr Figura, MoMA’s curator in the Department of Drawings and Prints, the show brings to our attention Pollock’s works in different media – drawings, prints, paintings, and even one decorative design on the lid of a wooden box – in a compact, but thorough overview of his career. This exhibition opens up seemingly familiar masterpieces from a new angle through thoughtful installation and inclusion of works that are usually hidden from public view.

The exhibition is arranged chronologically, dividing the artist’s oeuvre into three periods: early, transitional and mature. According to Figura, it came about as a decision to keep on view Pollock’s famous paintings, while they were temporarily removed from the permanent display during the exhibition of Pablo Picasso’s sculpture. Thanks to MoMas Picasso blockbuster, visitors now have a chance to see much more than a few canvases by, arguably, the US’s most well-known painter.

Out of 18 paintings by Pollock in the museum’s collection, 16 are in this exhibition, including famous works usually on view in the postwar collection galleries: the gigantic One: Number 31 from 1950, Number 1A from 1948 and Gothic from 1944. Apart from large canvases covered by Pollock’s signature all-over web of patterned, dripped or sculpted paint, a range of his smaller abstract paintings adds complexity to our understanding of his work as that of an “action” painter. The remarkable Full Fathom Five (1947), one of the first drip paintings, for example, must be seen in the original, because even the best reproductions cannot convey the dynamic quality of its surface, covered with paint, but also with detritus and debris, such as nails, tacks, buttons and coins buried under its thick crust, making the surface texture so charged that it appears to nearly burst with hidden energy. This painting is placed in the transitional period of the artist’s work, together with other smaller oil abstracts from the mid-40s, such as Shimmering Substance and Free Form (both 1946).

The gallery containing Pollock’s early period is the most convincing display of his attempts to integrate various influences, beginning with Thomas Hart Benton, his teacher at the Art Students League of New York in the early 30s, the Mexican muralists, and Picasso. Pollock’s work from this period is mostly representational, either untitled (in the case of prints or drawings), or bearing simple titles, such as The Flame (1938), Bird and Circle (both 1938-41). The early work shows that, from the beginning of his artistic path, Pollock tended toward tightly packed, busy compositions. As a rule, he left much more open space – untouched by the swarming crowdedness of his imagery – in his prints and works on paper.

One of the exhibition’s discoveries is the significance of prints in Pollock’s work. Of approximately 50 items on display, more than half are prints. As we learn from the exhibition, Pollock experimented with printing throughout his career, from the mid-30s up to the final decade of his life. It was obviously important for him to show variations that could be produced from one block or platen because the overall design of graphic elements is similar, but the works differ in colour and clarity of articulation.

Six untitled prints from 1943-44, displayed in a case near the entrance, vary in colour and the orientation of the image. The label informs us that the prints came from an edition of 20, and that their simplified and abstracted imagery of an eye, a head and “flailing” arms relates to the surrealist-inspired work of Joan Miró and Picasso. Surrealism is mentioned once again in a commentary accompanying 11 engravings dating from 1944-45, which were made at Atelier 17, a New York print shop operated by the British printmaker Stanley William Hayter. Hayter was fond of surrealist-inspired techniques, such as automatism, and challenged artists to experiment with creating chance images in engraving. It is clear from these prints that these experiments were essential for the development of Pollock’s painting, because the technique itself promulgated the fusion of unpredictability and a repetitive mechanical action, a guiding principle of Pollock’s art. In other words, Pollock’s active engagement with printing presents his achievement as a painter to us from a completely different angle and complicates the understanding of his work as based in physical action and unmediated involvement of the artist’s hand. Printing is as much a mechanical process as it is a handcrafted one. Knowing that Pollock used it continuously in the course of his career makes us reconsider the significance of unmediated physical involvement with material frequently attributed to his work.

As far as drawings and works on paper are concerned, the exhibition includes a few, many of which look like studies for paintings. Even though the label for the 1942 Untitled (Animals and Figures) states that “drawing was always an independent medium for Pollock, so that his sheets are never studies for paintings”, the next sentence asserts this drawing’s correspondence to two paintings from the same period hung in the same room, The Stenographic Figure (1942) and The She-Wolf (1943), “in its collection of reductive, simply outlined animals and human figures”. Indeed, from the beginning of the exposition to its end, the integration of works on paper and prints into the display of Pollock’s painting suggests rather strongly that the artist used the less formal and more intimate media to work out his ideas for painting. In the early stages of work, this is most evident in the compositional similarity and the expressive use of colour in such works as Landscape with Steer, an airbrushed lithograph from c 1936-37, and The Flame, an oil painting from c 1934-38.

Figura says her aim in this exhibition was to show the breadth of the museum’s holdings of Pollock’s work in such a way that it would highlight his work’s experimental nature and his willingness to try out different techniques and processes. This goal was aptly achieved, offering us a chance to rediscover an artist whom we thought familiar.