In her latest exhibition at the Rodeo Gallery, London, Cairo-born artist Iman Issa takes existing artworks that attempted to capture the zeitgeist of their time and creates new versions that have resonance for a contemporary audience

Egyptian artist Iman Issa’s latest exhibition at Rodeo Gallery, London, is one of interpretation and translation. Titled Lexicon, the show comprises 10 contemporary renderings of existing artworks. The originals do not feature, nor do the names of their respective artists, but their counterparts share their titles, and accompanying wall texts offer extended descriptions of their appearances. While spanning various mediums, historical periods and geographical zones, these original works are linked, each attempting to capture the zeitgeist of a particular time, place or community that has slipped from view. “A rural green landscape”, “men playing musical instruments”, “ploughing tools and simple machinery”: their imagery, once commonplace and relatable, has fallen victim to the relentless force of time, sapped of both relevance and the power to truly stimulate an audience. What Issa (b1979) is attempting to illustrate here is that, while these archaic images appear to be shackled to a particular epoch, they still carry a certain resonance in the contemporary world. In order to unveil this, however, they must be translated into a more relatable, time-appropriate language that will allow them to be read once more. They must adopt a new lexicon.

The text accompanying the first work, Prayer, tells of a 1985 oil and ink painting, 37cm wide and 45cm high, depicting a kneeling man with a long torso. In the background are line drawings of corpses, machines and half-animal, half-human figures. Colour is also important here, with deep blue, black and red hues casting an ominous tone as a black cat fringes the canvas. Visually, Issa’s alternative version could not be further removed from this scene. A thin white metal bar rises from a white plinth, turning at a right angle to meet the wall, at which point a halo emanates from a circular LED light. The structure stands like an Ikea table-piece – meticulously designed, unembellished and unassuming – but, unlike an Ikea table-piece, it is also strangely beautiful.

While the angular silhouette does to some extent resemble a weathered body bent before God, Issa is not concerned with simply applying a contemporary filter to an antiquated image. It is less visual process: more that she is attempting to capture a feeling. What stands here is the body of the original Prayer, but a body that has been stripped of its flesh, features and humanity, and has been left as pure. No longer is there a strong, deep colour field or an ominous black cat, for these ephemeral, visual characteristics do not resonate with the artist at this point in time. There are, however, comparable qualities of a less tangible nature. There is a recognisable sanctity to the piece, a feeling of solace, even a discomfort in the way the light is held in such close proximity to the wall. As with the other sculptures on show, such as Devotees, Mourning and Colonial House, it is the atmosphere of the original work that is recaptured here, the feeling of safety within an encroaching darkness. It may look dissimilar to the original, but in its serenity and isolation this angular structure still holds the form of the kneeling man with the disproportionately long torso.

On the opposing wall hangs Fortune Teller, the one photograph in the exhibition. The print shows a bright circle of light – a light bulb maybe, or a headlight or the sun – illuminating a section of curved horizon that threatens below. The scene is hard to read accurately, but is one that is both peaceful and fairly ominous. “A 1959 oil on Celotex painting,” the text explains, “depicts a large bearded man standing in front of a table. On the table are cards, a lantern and a tortoise walking towards the edge of the table.” Without any visual support, the words hang as disjointed attempts at explanation, taking on an elegant Lydia Davis-esque poeticism as a result. (The note “text panel under glass” is included in the material checklist for each of the Lexicon works. Issa is very aware of the power with which the words are imbued when they are left as signifiers with nothing to signify.) The text echoes as we reach into the darkness of the print: “A woman is seated on a chair behind him. The walls in the room are covered with drawings of fish.”

We are not there with the couple. We are not in the presence of the fortune teller. But we are with Issa as she enters. We are with her as she scans the scene, breathing in the air of mysticism and threat that shrouds the photographic response. As with Surrealism (III), a mahogany response to a 1935 drawing composed by a mourning mother, and Seduction, a low-level bronze and aluminium work, the origins of which are found in a 1982 painting of a disproportionately rendered couple, here we have a game of dissociation. We are positioned in a liminal space, flanked by a description of a visual scene and a physical rendering of the emotion that it conveys. We cannot hope to formulate an accurate image of the original work, but by staring into the eyes of the alternates we can experience what it would have felt like to an audience in 1959.

In the footnotes to his essay Living On, French philosopher and famed deconstructionist Jacques Derrida writes: “A question to the translators, a translator’s note that I sign in advance: What is translation? Here, economy. To write in a telegraphic style, for the sake of economy.”1 Telegraphic is the key word here, and it is the key to Issa’s practice. The original works on which this exhibition is based are busy with factors contemporaneous with the years of their formation, and in a technological age when all visual matter is subject to streamlining and simplification, it is these superannuated characteristics that actually obscure the qualities – the timeless qualities – that the artworks originally aimed to convey: seduction, prayer, mourning, and so on. Issa has redesigned these works in a telegraphic style in order to reanimate their key attributes. She has stripped away the distractive material – the outdated stylistic embellishments and the visual features indicative of a definitive era – leaving behind nothing but the true essence of the artworks, the feeling. And unlike antiquated aesthetic and allegory, feeling is something that the contemporary world can relate to. “Triumphant translation is neither the life nor the death,” Derrida continues, “[but] its living on, its life after life, its life after death.”2 Issa’s Lexicon works are both new and not new. They are original works constructed by her own hand, but they are also continuances of pre-existing ideas; ideas that she has not imbued with life, but has instead dusted off, translated and allowed to live on. 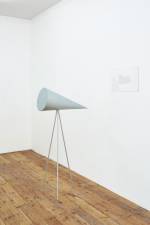 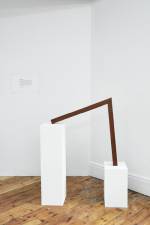 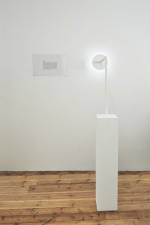