Ilya and Emilia Kabakov: Not Everyone Will Be Taken Into the Future

Ilya and Emilia Kabakov: Not Everyone Will Be Taken Into the Future

This first large-scale British retrospective of work by the US-based Russian installation artists Ilya Kabakov and his wife, Emilia, is powerful, vividly varied and thought-provoking 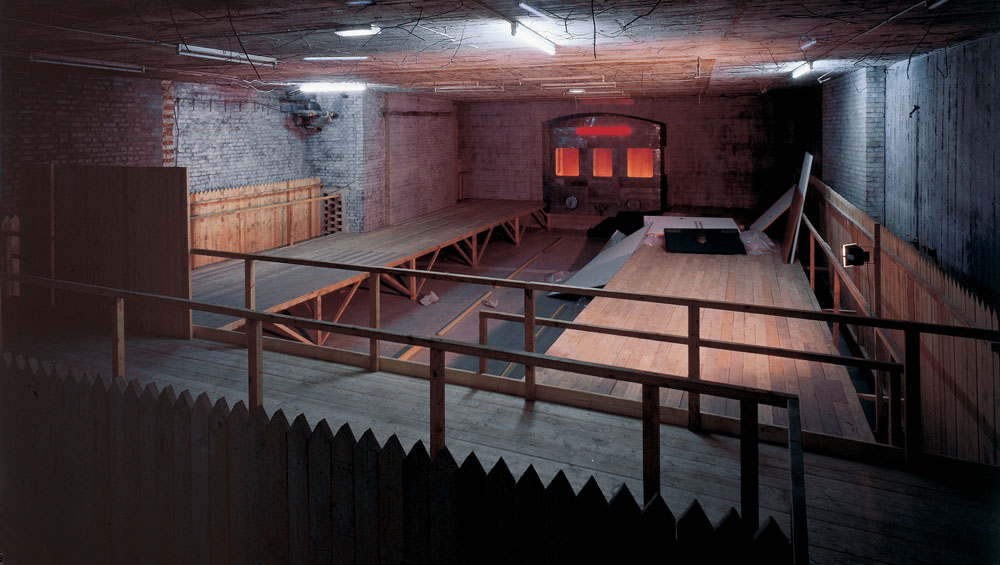 The world abounds with unusual and perplexing museums, but the one currently installed at Tate Modern in London is among the strangest. Dozens of household objects hang from ropes, within a room painted in the green and grey of a drab Khrushchyovka – the nickname for the 1960s apartment blocks built when Nikita Khrushchev was leader of the Soviet Union. There are bowls, shoes, brushes and pencils. Four vitrines – perhaps one could call them incuriosity cabinets – display further quotidian artefacts, while an as-yet unsorted jumble lies on a central table. Attached to each of the dangling items is a nugget of text, suggestive of recordings gleaned from a bugged flat. Some are immediately sinister: “Let’s go, he’ll remember, fuck him, let him lie there” has a linguistic brutality to match its implied act of violence. Others – “Mother, are we going to chow soon?” – clothe potentially grave situations in apparent banality. 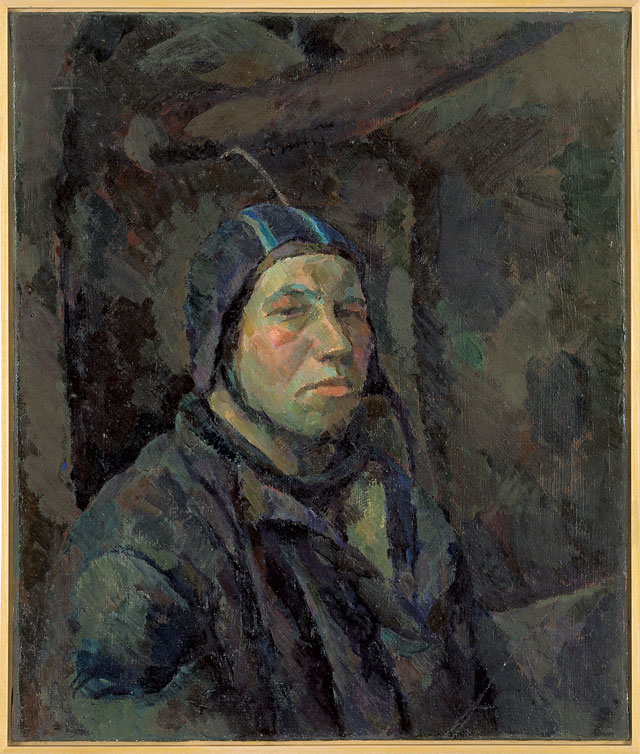 This is the installation Objects of His Life (2005) by the US-based Russian artists Ilya (b1933) and Emilia (b1945) Kabakov – his wife. It is an attempt to imagine a character whose existence is reduced to the objects he owns and his presence in institutional records. The resulting fragments create a picture, but one of the fringes, of marginalia circling around a void.

Such lacunas are everywhere in Not Everyone Will Be Taken Into the Future, a survey that spans six decades of Kabakovs’ careers – albeit often focused on that of Ilya alone. From Ilya’s Soccer Player (1964), in which the titular figure is a mere outline, to Under the Snow #2 (2004) by both artists, where scenes from Soviet life are buried by swooshes of wintery white, the Kabakovs’ work stresses presences and absences. Even Ilya himself, who practised alone until 1989, when he began collaborating with Emilia, is often absent as himself, producing works in the guise of fictional characters. 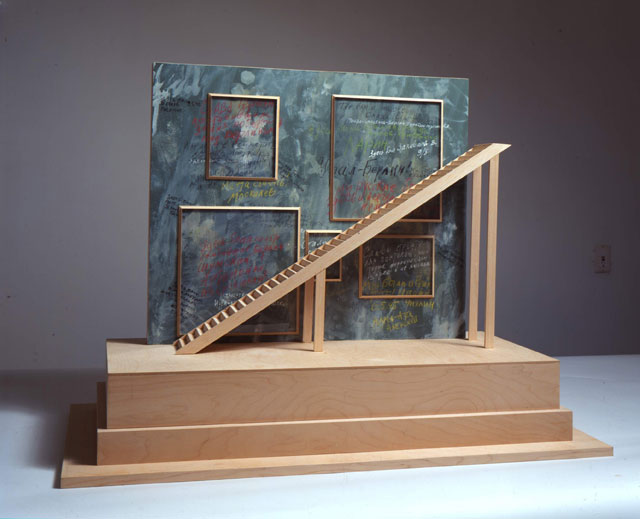 Tate’s survey is the Kabakovs’ first large-scale museum exhibition in Britain. Domestic audiences have a lot of catching up to do, as this is one of the most consistently beguiling oeuvres in contemporary art, and one of the most heterogeneous. The first, Ilya-focused room alone contains such polarities as a Cézanne-esque Self-Portrait (1959) and a monochrome textile-and-paint riposte to Da Vinci’s Vitruvian Man, The Boy (2000). Moving forward, one encounters figurative and abstract paintings, paintings that imitate collage, Jasper Johns-like object paintings, text-and-image paintings; architectural models, drawings, books, and installations that vary in scale from cupboard-sized to entire rooms. 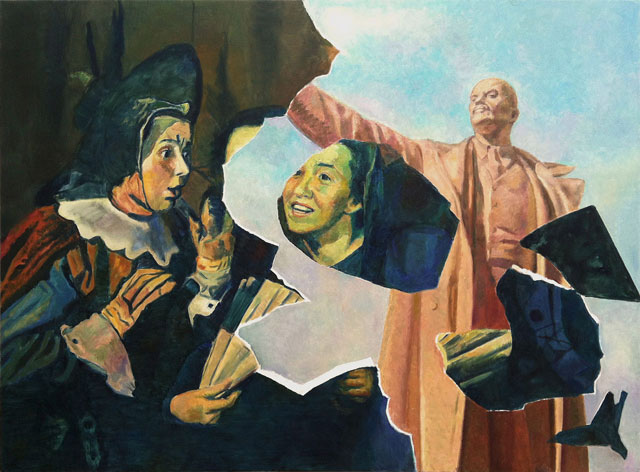 For those more familiar with the state-promoted socialist realist art of the Stalin era, wryly satirical pieces such as By December 25 in Our District ... (1983), which shows a construction site for a building that was meant to be finished four years earlier – might surprise with their willingness to mock the deficiencies of Soviet society. Sobakin (1980), which intimates the appearance of a bureaucratic form, equates the life of a fictitious citizen with that of a dog.

Ilya Kabakov belonged to a generation of artists who began practising during Khrushchev’s thaw, and within a milieu whose members were perhaps more pragmatic than the either the partisans or dissidents of the post-revolutionary years. Working in Moscow from the tail end of the 1950s, he was neither dissident nor conformist. He developed his own practice in private while working in an official capacity as a state-mandated illustrator of children’s books (some of which appear in the Tate’s related exhibition Red Star Over Russia: A Revolution in Visual Culture 1905-55, which runs until 18 February 2018); his loft studio at Sretensky Boulevard was the centre of a vibrant avant-garde scene that, in the 1970s, blossomed into the internationally renowned Moscow Conceptualists. When he did fall foul of the Soviet authorities, after the bleakly comic Shower series (1965; not featured in the present exhibition) was interpreted as direct critique of the regime, he simply signed up for more official work under a pseudonym. In 1987, he took a six-month residency in Graz, Austria, after which he moved to New York and began collaborating with Emilia. 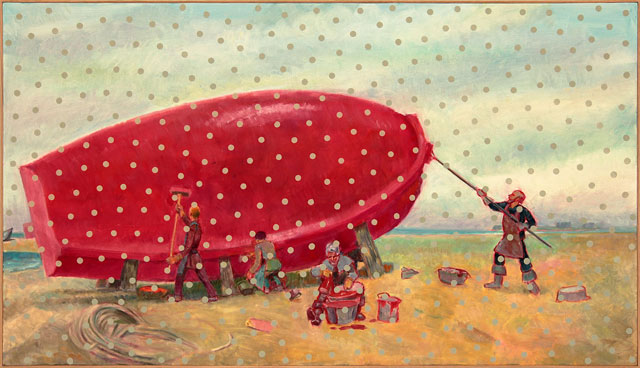 The Kabakovs may not seem the ideal artists for the sort of juvenilia-to-late retrospective that Tate often favours. Many of Ilya’s seminal Moscow works, such as the Ten Characters (1970-74) series of illustrated stories, require a degree of consideration that can be difficult to achieve in an overstuffed gallery. Much of the more recent collaborative work has taken the form of installations, of which the duo have constructed around 200 since the 1980s. Although rarely site-specific in the sense that location provides a significant element of meaning, they are the sort of works that are difficult to recreate, reassemble and display en masse. A compendious representation of this aspect of the Kabakovs’ careers would engulf the entire museum and several acres of the surrounding land.

Yet these limitations have allowed this exhibition to flourish. Although it contains more than 100 pieces spanning numerous media, it leaves one wanting more. And seldom has a Tate show been organised so as to give so much space for contemplation. When eight of the Ten Characters do appear in the penultimate gallery, surrounded by contemporaneous drawings, they are arrayed on classroom-style desks to allow thorough exploration rather than a quick glance-through.

The Kabakovs’ practice frequently spurs the viewer to learning and engagement. In Ilya’s The Man Who Flew Into Space from His Apartment (1985), the first of the large-scale installations, we peer into a disordered flat wallpapered in communist propaganda posters. In the centre hangs a sort of human-size catapult, beneath which sit a pair of shoes, while an enormous fracture in the ceiling brings in light that simulates the open air. On one level, this is a bold parody of Soviet futurism, the makeshift catapult a far cry from the bird-like flying machines proposed by Vladimir Tatlin in the 1930s. On another, it contains a utopian dream – of someone able to escape his material confines and ascend to an ideal realm. As so often in this exhibition, the absences – of the homespun spaceman himself, of the advanced technology promised by the posters, of a knowledge of the man’s trajectory – leave the viewer to puzzle out the details, aided by a trio of imperfect accounts by supposed witnesses. 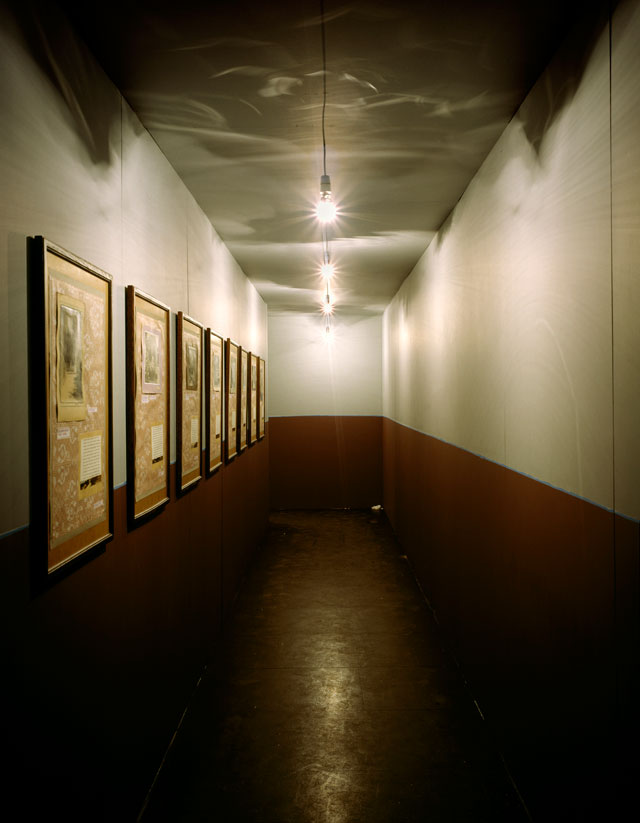 Among all the tricksy marvels, one piece astounds with its sincerity. Ilya’s Labyrinth (My Mother’s Album) (1990) takes the form of a winding corridor punctuated by doors and dimmed lightbulbs. Along the walls are 76 framed works, each of which contains a florid background, a stock photograph of a bucolic park, a strip of postcard and a piece of text. The latter forms an autobiographical narrative, allegedly written by Ilya’s mother. Its few moments of unhappiness – a childhood spent with lodging actors, for instance, which feels like a scene from a late-19th century novel – soon give way to experiences of antisemitic abuse and economic destitution. As you creep to the maze’s centre, the sound of Ilya singing a traditional Russian ballad grows louder, until you reach the core, which contains nothing more than a pile of strewn debris and a broom. After squinting through a seemingly never-ending succession of panels and a litany of privations, one finds not an affirmation but a void. 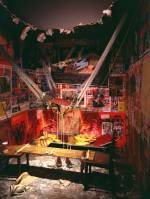