In a year full of spectacularly staged events, such as Queen Elizabeth II’s Diamond Jubilee festivities and the Summer Olympics in London, one is repeatedly confronted and impressed by magnificent displays of pomp and circumstance. Exploring notions of spectacle on a far more intimate scale, I Spy: Photography and the Theater of the Street, 1938-2010 is a wonderful new exhibition featured this summer at the National Gallery of Art in Washington DC. The exhibition showcases nearly 90 photographs and two video and digital still installations of six acclaimed photographers of the 20th and 21st centuries including Walker Evans (1903-75), Harry Callahan (1912-99), Robert Frank (b1925), Bruce Davidson (b1933), Philip-Lorca diCorcia (b1951), and Beat Streuli (b1957).

Though varied in their technical methods and overall aesthetic outcome, these six artists present a similar homage to happenstance and share a profound fascination with the theatrical intersection between humanity and urbanity. Appropriately named, I Spy, after the traditional children’s game of viewing the outside world from the vantage point of a car, bus, or train window, the exhibition celebrates “the cacophony and diversity of modern life, as well as it’s rapid pace” through the chance encounters of each photographer and the bustling world of the street.1 By creating specific technical parameters and often relinquishing their control of the camera, these artists seem to employ photography as “a means of selecting and ordering the chaos of the city.”2 These imposed technical limitations result in visually striking bodies of work, at times joyful in their nonchalance or grim in their insistent confrontation with gritty realism, that bring to mind Susan Sontag’s notable reflections on photographs as “unpremeditated slices of the world.”3

Situated within unadorned, yet sleekly elegant galleries, the works are organised both chronologically and monographically, with unique framing and matting styles creating a cohesive effect between each separate series of photographs. In the first two galleries, the works of the American photographers Walker Evans and Robert Frank capture people and places that remain in what Evans calls “naked repose” – entirely natural, candid, and occasionally accidental.4 In each of these series, Evans and Frank depart from their usual artistic comfort levels – Evans with his carefully planned compositions and Frank with his expansive photographic record of America taken by driving over 10,000 miles around the country. In his Subway Portraits series from 1938-41 and Bridgeport, Connecticut series from 1941, Evans uses his camera as an objective recording device to capture life as it occurs both in the bowels of the New York subway system and on a random street corner in Connecticut. In a similar gesture towards randomness and happenstance, Frank limits his personal artistic authority in favour of photographic objectivity by taking snapshots of the whirling street life of New York City from inside the window of a moving bus. For as seemingly unplanned as these works by Evans and Frank appear to be, they have the ability to mesmerise viewers by their compositional legerdemain and the colourful cast of characters captured as if by serendipity.

Building upon the themes of voyeurism, surveillance, and a blending of public and private realms, Harry Callahan’s Chicagoseries from 1950 and Bruce Davidson’s Subway photographs from the 1980s represent a startling visual counterpoint to the fairly casual works of Evans and Frank. Departing from his rigorous Bauhaus training at the Institute of Design in Chicago, Callahan achieves very close-up shots of women’s faces amidst crowds on the street through use of a telephoto lens on his 35mm camera.  Caught completely unaware and often in motion, these women are dramatically presented in high contrast with stark lighting, moody shadows, and off-kilter angles.  Through his goal of photographing women lost in thought, Callahan’s pieces seem to intrude upon the private psyche of these women, resulting in intense psychological portraits of “introspection, loneliness, and isolation of the individual in modern urban life.”5

Davidson realises similar qualities of high drama and shocking realism through his large-scale coloured photographs of the gritty underworld of the New York subway system. During the 1980s period in which Davidson executed this project, the subway system fostered rampant levels of crime and became notoriously characterised as a hotbed of illicit encounters and dangerous liaisons. Using almost uncomfortably close camera angles and a relentless voyeuristic style that calls to mind the perspective of a surveillance camera, Davidson’s subjects accost, antagonise, withdraw from, ignore, and occasionally show off in front of the camera. In his famous text about photography, Roland Barthes states that every photograph is “a certificate of presence” and an “animation” of sorts.6 Through their dramatic documentation of the human presence, Davidson’s enthralling subway portraits and Callahan’s intimate portraits of women certainly serve to animate both the theatre of the subterranean and the street.

The final two galleries transition from the mere documentation of street life to the cinematic manipulation and idealisation of street scenes, treating locations as theatrical stage sets and ordinary subjects as iconic celebrities. In Streetwork from 1997-98 and Heads from 2001, American photographer Philip-Lorca diCorcia makes use of a telephoto lens and a system of synchronised flashes to artificially light pedestrians on the streets of New York City. His calculated staging of quotidian life results in compositions – often resembling film stills and publicity posters – which evoke a heightened sense of theatrical spectacle. In similar cinematic fashion, Swiss artist Beat Streuli explores the undulating rhythmic quality of street life through his NYC 01/02digital stills from 2002 and 2012 and in film sequences for Manhattan 09-09 created in 2010. Extending the observation of street life beyond the realm of still photography, Streuli takes advantage of film’s ability to capture both movement and sound, resulting in hypnotic meditations on the spectacle of the street.

Each of these six photographers displays unique bodies of work, yet as this exhibition expertly demonstrates, they are united by common documentary motivations, technical experimentation, and a keen observational impulse. To return to the reflections of Susan Sontag, the medium of photography can be understood as an extension of the eye of the flâneur – that archetypal strolling pedestrian who surveyed the comings and goings of his fellow countrymen on the streets of 19th-century Paris (as expounded initially by Charles Baudelaire and theorised more recently by Walter Benjamin).  Sontag writes: “The photographer is an armed version of the solitary walker reconnoitring, stalking, cruising the urban inferno, the voyeuristic stroller who discovers the city as a landscape of voluptuous extremes.”7 Upon exiting the exhibition and leaving behind the National Gallery’s hushed neoclassical halls, one is immediately swept up into the hustle and bustle of the National Mall, becoming part of the city’s own theatre of the street. It is impossible to resist the urge to take out a camera (or these days, a mobile phone) and, like these photographers, capture a slice of this world.

1. From the introductory text panel of the exhibition.

2. From the exhibition press release: http://www.nga.gov/press/exh/3428/index.shtm 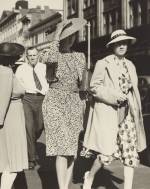