Pindell is unafraid to tackle police violence or slave massacres in her videos and paintings, and even her abstract works have an element of close observation and bearing witness 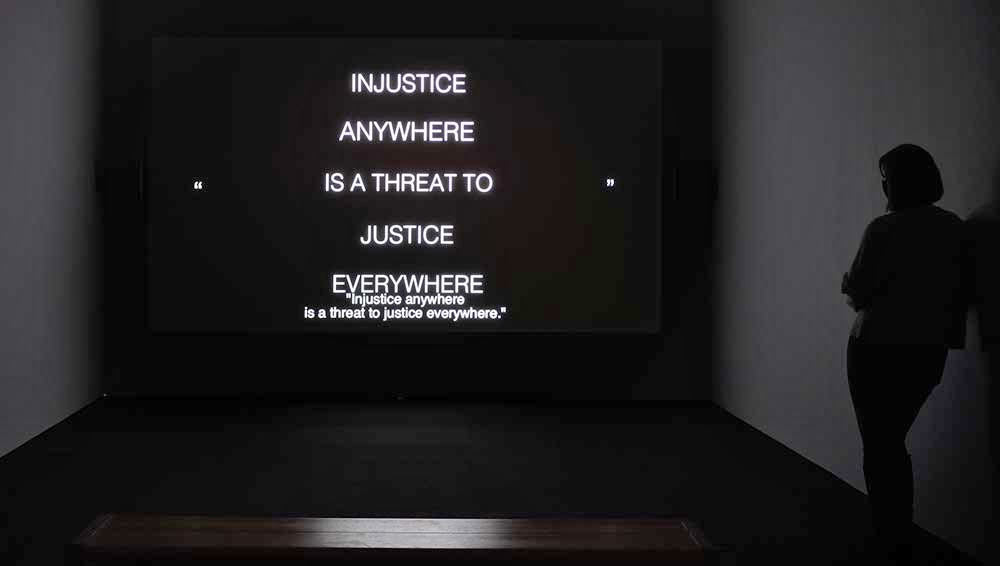 The dot looms large in the work of Howardena Pindell (b1943, Philadelphia) though the dots themselves are tiny – either minute holes in stencils created with a standard office hole punch, or the chads (small circles) that emerge as a byproduct. In her early work on show at Edinburgh’s Fruitmarket, these dots might be ranged in grids, numbered or inscribed with tally marks, whose serried ranks bamboozle the eye, almost op-art fashion. Or the stencils are arranged on large canvases and sprayed with layer upon layer of diluted acrylic, building up to a hypnotic, abstract colourfield. Later on, and most powerfully, they appear as a protest against police racism and brutality in her work Diallo (2000): two names, four guns, a spray of bullet holes scattered across the dark canvas, with those that hit the “target” flagged up in red.

In a filmed conversation about this show – Pindell’s first solo institutional presentation in the UK - with Fruitmarket Gallery director Fiona Bradley, Pindell is asked where this circle motif comes from. Pindell recalls being initially inspired by the work of a fellow MFA student at Yale (from which she graduated in 1967) who was using circles, though later she realised: “As a child … I had been frightened by a circle.” Stopping with her father for a root beer at a stand in Kentucky, she had noticed a red painted circle on the bottom of the mug (at that time, in the 1950s, utensils for white and non-white customers had to be separated out, and the red dot was the mark of that segregation). “When I asked my father why, and he told me, I was shocked and it kind of stayed there and brewed.”

It also bruised. And it is bruising that comes to mind when studying the large, densely worked paintings of sprayed acrylic stencilled works that first meet your eye in the gallery – one (Untitled, 1972), a pointillist symphony of purple, black, blue and pink, the colour of freshly traumatised flesh; another hinting at the green, blue and yellow palette typical of bruises on the mend. A third (Untitled, 1969-72) – all orangey amber, stippled with smatterings of blue - is more like the patination of rust as it corrodes metal. They have about them a profound aura of beauty and decay. 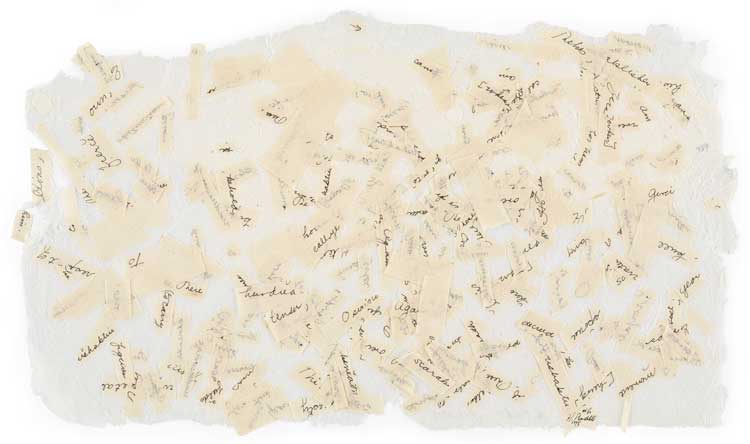 These works reveal her close study of Josef Albers’ colour theory while at Yale, under Albers’ protege Sewell Sillman. The paler works on unstretched canvas and paper, in the gallery next door, are collages that exude a distinctive Pindell quality of playfulness with an almost obsessive undercurrent of close observation, ordering, or tallying. Pindell tells Bradley: “I was numbering dots and put them on graph paper, and then I started dribbling paper into the wet paint and then I started using colour markers and they would bleed up through the paint. I liked that a lot. I also started extruding paint through the holes. I’m working on a series now, the grid series … letting dots that have the dye on them bleed up, plus extruding paint. It’s just like a playful gesture … having fun in a way.”

These early works exude confidence, in scale and in their free experimentation – the more remarkable for the fact that she only had a tiny studio apartment in which to make them. She was working at the Museum of Modern Art at the time, joining in 1967 as an exhibitions assistant, rising to associate curator. As the only black employee in the department, she was excluded from a lot of work-related socialising, so she just carried on with her art in the evenings. But no matter how good her work was, she had little hope of being exhibited. She tells Bradley: “In the 60s and 70s white male artists were shown. Women and people of colour were ignored … I was a member of a women’s cooperative, AIR, and I was the only person of colour. My spray works were shown for the first time there, in the early 1970s.”

There was also little support among her African American peers, she says, “because the feeling was that the work should be about the black experience. A group of us were shunned – Bill Williams [William T Williams] and probably Al Loving. That’s all changed, that’s not true any more.” 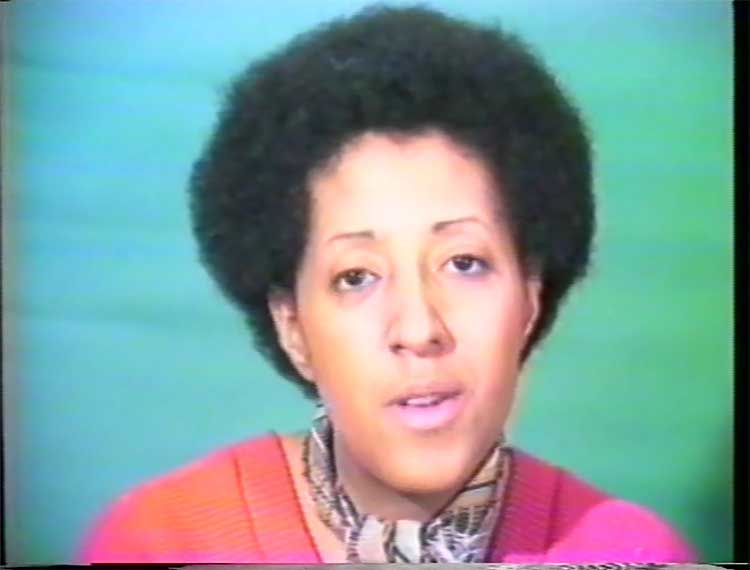 Indeed. But that experience of casual, institutionalised racism eventually caused her to leave MoMA, take up teaching - at Stony Brook University, where she still teaches - and make her seminal video Free, White and 21 (1980). In this film, she faces the camera while calmly recounting personal examples of being excluded, harassed, abused or sidelined due to her colour, in response to which a young, white interviewer – played by Pindell in blond wig and whiteface – expresses disbelief or dismissal. This work triggered massive controversy and violent reactions in its early days but was still widely shown.

The title of this show – A New Language – comes from an essay Pindell wrote as she was researching racism in the art world of the 1980s and 90s. In it, she says: “I am an artist. I am not part of a so-called ‘minority’, ‘new’ or ‘emerging’. These are all terms used to demean, limit and make people of colour appear to be powerless. We must evolve a new language which empowers us and does not cause us to participate in our own disenfranchisement.”

The dots are part of her language, but so is her absorption with grids and numbers and, in her activism, they emerge again through a focus on data, as a way of bearing witness or keeping score. The bulk of the overtly activist works are concentrated in the first-floor gallery, including Separate but Equal Genocide: Aids (1991-92), which commemorates individuals who died from Aids, and was inspired by the story of Pindell’s cousin Carmen Lewis, who died of Aids at the age of 35, and who could pass for Hispanic, white or black. He shared with her how his healthcare treatment varied according to his perceived ethnicity. In the work, Pindell names white and black children and teenagers, who contracted HIV primarily from blood transfusions, across the two adjacent canvases, each edged with a thick, bloody red line. At the time, these young people would be reported in the press as “innocent”, as if adults with HIV were engineers of their own destruction.

Diallo (2000) is a memorial to two young, unarmed black men, Amadou Diallo and Patrick Dorismond, who were shot dead in separate incidents in 1999 by officers from the New York City Police Department. There are 41 dots to represent the 41 shots fired at Diallo, 19 of which hit home. In both cases, the police officers were acquitted of murder. These powerful protest works are interspersed around the two first-floor rooms with some of Pindell’s abstract, collaged pieces, offering a moment of respite, a breathing space. She and Bradley discussed this balancing strategy as they explored the choices for this show – conversations which began four years ago. 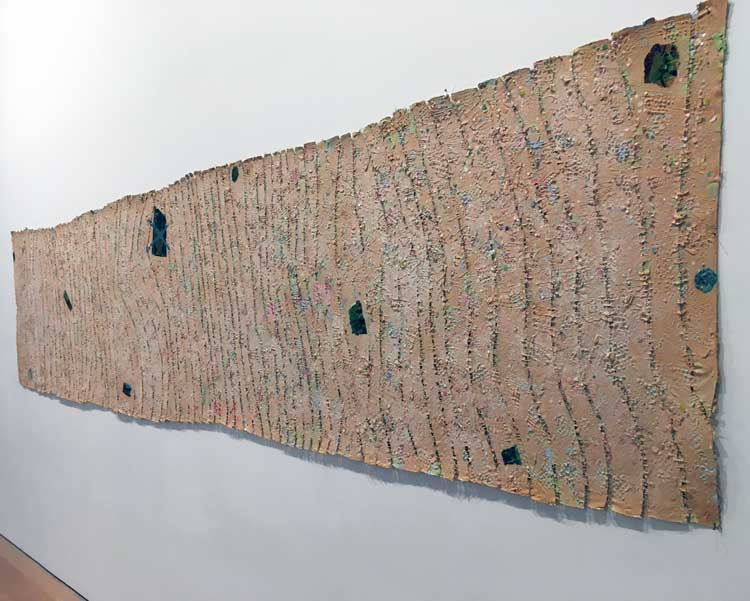 Sometimes the qualities overlap, as with the sumptuous, flesh coloured Tarot: Hanged Man (1981). A long, lush work, it comprises strips of canvas that she has sliced up and stitched back together, then collaged with dots, layered with pastel, peach paint, glitter and faded, almost obscured tarot-card images. The image of the hanged man, however blurred, sits in profound proximity to her video work Rope/Fire/Water (2020), which details in stark black and white, verbally and with occasional shocking documentary images, a catalogue of racist atrocities, including lynchings and slave massacres, all unfurling against the steady tick of a metronome and Pindell’s measured voice; it occupies its own discrete space, with a well-justified strong content warning at the door.

Pindell delves deeper into the history of racist brutality in the painting Columbus (2020), a large slab of black, in which handprints form part of the thick, painted texture. At its base lies a small pile of (rubber, cast) dismembered hands. In her trademark Helvetica lettering, she names a variety of brutal regimes that cut off the hands of their oppressed, indigenous subjects, sometimes as a means of tallying the war dead, sometimes for failure to follow orders.

Shifting gear, we are offered Plankton Lace #1 (2020), a swarm of blue strips of canvas stitched together and dusted liberally with dots, glitter and ellipses. The work is inspired by the micro-organisms vital to the health of the oceans, but currently under threat from human ignorance and plundering of planetary resources, though it can also be enjoyed for the sheer saturation of colour and richness of textures. In the programme, Pindell is quoted as saying that she sees these abstract works as “an intense relief, a kind of visual healing, so that you get some distance from what you’ve seen”. We must recognise that beauty and brutality coexist. What Pindell seems to be saying is that beauty can give us hope to lead us out of darkness, but not without bringing the causes and impacts of that brutality into the light.

• Howardena Pindell: A New Language will travel on to Kettle’s Yard in Cambridge and Spike Island in Bristol during 2022 and 2023. 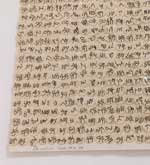