Hector McDonnell: ‘My paintings have always been about personal experiences’

Hector McDonnell: ‘My paintings have always been about personal experiences’

As well as a realist painter of everything from Northern Ireland’s infamous Maze prison to Rwanda after the genocide and the twin towers following 9/11, McDonnell is a prolific cartoonist and the author of books on Irish history

Hector McDonnell is a realist painter working in Ireland and New York. He was born in Ireland in 1947.  He went on to study drawing, painting and sculpture in Munich and Vienna before reading history at Oxford University. His career has straddled the worlds of art and writing, and he has published a number of books on Irish history using his family’s history as his starting point to explore notions of exile and identity. His most successful book has been Ireland’s Other History (published in 2012 by the Lilliput Press, Dublin), an account of Irish prehistory and its European origins illustrated with his own drawings. Most recently, he has been working on a complex, early-medieval European story about the Jewish kings of Narbonne, which is also to be published by Lilliput. In November 2015, the Delahunty Gallery in London showed his paintings of interiors, one of his constant themes, including many of Chatsworth, where the late Duke of Devonshire was a collector of his work.

Janet McKenzie: You studied art in Munich and Vienna. How did you come to choose those cities over London, for example?

Hector McDonnell: I was curious to experience something of the wider European art scene, and as I had learned German at school it seemed to me an exciting adventure to dive into that particular world.

JMcK: What did you learn in Germany and Austria that might have given you a different direction as an art student in the 1960s?

HMcD: I learned a lot about the development of the central European creative world and how its course was affected by the major political traumas of the 20th century. This gave a particular social and political edge to my artistic outlook that has never left me. The most obvious consequences of this have been my paintings of the more troubled aspects of our society, such as my paintings of the Maze prison, Rwanda after the genocide and the wreckage of the World Trade Center after 9/11.

JMcK: Did you at any stage explore abstraction?

HMcD: I did try, as a student, but rapidly discovered that I had nothing of any significance to say in that direction. I came to the conclusion that the only thing of merit I had to say would be to describe aspects of the world I saw around me that particularly moved me. This led me to conclude that I had to be a “realist” painter.

JMcK: What were the main influences as a young artist that fuelled your work as a realist, factors that instilled confidence to pursue your own path?

HMcD: My time in Germany and Austria inevitably led me to such important 20th-century central European movements as the Blaue Reiter and artists such as Wassily Kandinsky, and these are always with me when I work, but my major delight has been in the works of Van Gogh and the impressionists, as well as in much earlier artists such as Johannes Vermeer and Jan van Eyck. I was also much influenced by the three summers I spent as a teenager working as an archaeological draughtsman on a dig on a Minoan site on Kythira in Greece. This taught me a lot about the value of precision in drawing!

JMcK: You published cartoons on a regular basis for the Tablet. How did that impact your main studio practice?

HMcD: My mother was a wicked cartoonist, and I had been brought up to be able to turn out cartoons at the drop of a hat, so the Tablet drawings were a good bit of fun, and a welcome source of income. I thought of them, though, as a completely separate aspect of my life to that of my world as a serious artist, because I have strenuously avoided producing paintings that go into the world of deliberate distortion. Mind you, it has continued to be a great source of fun. I illustrated, in a similar way, a series of books of Irish ballads, of which the best is Ireland’s Other Poetry, a massive compendium of Irish humorous poetry from 1650 to the present day, which I and a great friend, John Wyse Jackson, put together. I had to do at least one drawing for every page, and as there were more than 400 pages, this was quite a task.

JMcK: Drawing underpins your practice. Is it a preparatory activity, or do you make finished drawings that you exhibit?

HMcD: I love drawing, and generally draw my paintings on to the canvas with my brushes, but the concept is in my head before then. In general, I prefer to avoid preparatory drawings unless there is some detail that I need to resolve, as colour and light are essential to my paintings, and I do not want these aspects to be submerged by linear work. I also use drawing as a way to capture things that I do not want to turn into paintings.

JMcK: Irish subjects form the basis of your scholarly research. How does the country’s ancient prehistory inform the minds of artists and writers today?

HMcD: I really don’t know how it affects other artists, but, for me, the magical ideas of our ancestors enliven my understanding of the world around me. Their ideas were so complex, I really don’t know where to start, but I am constantly in awe of their understanding of their place in the world, and of their reactions to the natural powers that dominated their lives. There was so much they could not explain, but they knew how powerful and life-threatening these forces could be, and the monuments they left behind are expressions of this reality.

JMcK: Most of your work comes from experiential sources, and often it is the ordinariness of a subject that captures one’s interest. Is it not dichotomous that you have most recently chosen the grandeur of Chatsworth to paint from?

HMcD: I know it may seem odd to the outsider, but it isn’t really. My paintings have always been about personal experiences – whether at Ground Zero or in a Stuttgart tram or a massacre site in Rwanda, for example – but it happened that I went to Chatsworth for a couple of days with the notion that I might find something that could become a painting, and was so overwhelmed with fascination at the wonder of the place that I came away inebriated. I found I had a dozen ideas I desperately wanted to paint, and as they were so grand and demanding, these concepts took over my life for the next year. I had intended to paint much else as well, from a barber’s shop in Enniskillen to life in a market hall in Stuttgart, but time was against me, and so Chatsworth became the dominant theme of the exhibition. It was also a way of expressing another old love of my life – I had taken, as part of my history course at Oxford, a course on English baroque architecture, along with a couple of great friends who had found their own lives inspired by this experience, so it was a great pleasure to find myself back in that baroque world that had been such an important bit of my student life. I also thought often of one of them, Gervase Jackson-Stops, who was the most delightful person and sadly died of Aids more than 20 years ago, so my paintings were in part a memorial to his passion for great country house architecture.

JMcK: The chapel at Chatsworth has inspired you greatly?

HMcD:I was bowled over by what I saw in the chapel. The light was pouring in through the windows, with all its baroque theatricality. What I particularly enjoyed was that it is such a contradiction of a setting – the baroque is such a Catholic counter-reformation invention, designed to glorify apotheoses, angelic visitations, divine Trinities and gorily martyred saints, and yet Chatsworth's chapel is aggressively Protestant, with representations of the Virtues replacing the saints and not an angel or an immaculate conception in sight. On top of that, the present duke had done something wonderfully out of step with all this – he had replaced the plain altar table in the central niche with Damien Hirst’s bronze statue of St Bartholomew, wearing his flayed skin like a redundant overcoat over his raised arm. It’s called Exquisite Pain, I believe, but it made such an impression on me in that setting.

JMcK: Doorways and windows can be seen to allude to inner and outer experience, the binaries of private and public, individual and political and the tension that exists between them. Historically, landscape design addresses the manner in which man and nature exist harmoniously. Can you describe your responses to the different places you work from?

HMcD: Oh dear. I am just a hopelessly naive enthusiast for life. Everywhere I go is fascinating; the people and their worlds grip me in their thrall, and there is never enough time to give expression to all that I see. Occasionally, I get something right, as I did at Billingsgate and at Benone Strand – two very different subjects – one of a myriad of people at work in a great market, the other of a great open beach and the waves coming on to it – and then I just sigh and wish I had the capacity of Degas or Ingres to do this every day of my life. My good paintings are all the result of long, hard work, and I am just distressingly aware of how many laps I lag behind the works of my great heroes.

JMcK: What are you working on at present?

HMcD: A couple of interiors of a beautiful little house that belonged to an old lady whom we loved in Garrison, New York, and who greatly enriched our lives, the market hall in Stuttgart with a tumble of fruit boxes and shoppers, an extraordinary Chatsworth passageway with a marble floor, a cousin in his kitchen, a London window with an Ai Weiwei pot standing in front of it, and I suppose a dozen other things. And, oh yes, all the drawings to illustrate the Jewish kings of Narbonne book. But now I must go and muck out my daughter’s stable, which is another aspect of my life … 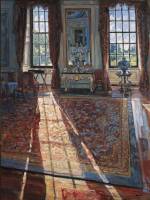 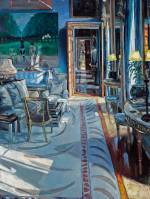 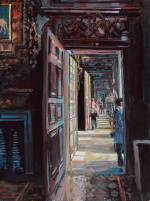 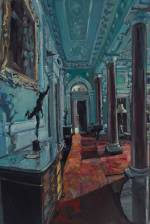 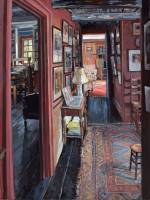 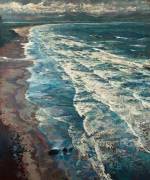 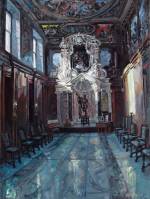