Paying lip service is not enough. The artworks in this exhibition, made by members of the mental health arts charity H’arts in Mind, cry out for an end to disability discrimination and for our society to start talking about and ending the stigma attached to mental ill health 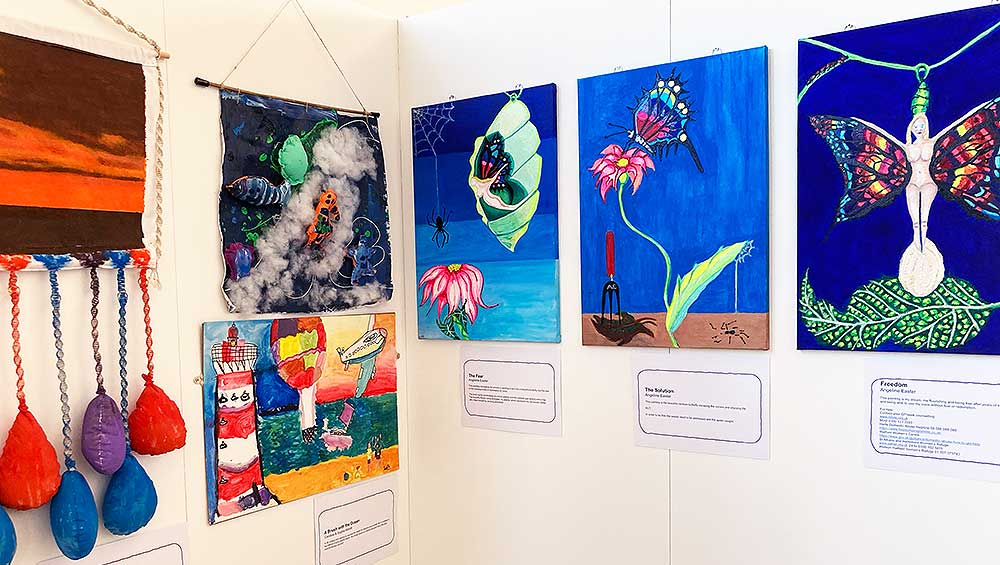 “… And then one day, you’d lost the ability to play. Just like that, your world was shattered. All you knew was gone. Unable to escape reality alone, you found yourself replacing this with a need to have that reality – your existence – verified by others, compelled to reveal entirely, to admit every thought and feeling, and to seek validation. Alone you were nothing. Invisible. You did not exist. But nothing was ever enough. You craved more. You couldn’t trust yourself. Your best friend had become your worst enemy. You had lost the child you knew, and she had been replaced by a stranger. A stranger you did not like.

This text, an extract from a letter I wrote in therapy to my younger self, currently accompanies a black-and-white photograph of a gleeful four-year-old Anna – jumping for joy as she arrives at her uncle’s house in Australia, to discover there is a pool in the garden – on show in St Albans Museum + Gallery. I keep a copy of this photo close to hand, representative of my inner child, and a reminder to be compassionate to myself and, perhaps one day, to grow to like – or at least accept – that stranger.

When I posted the text and image on Instagram, as one of just many vulnerable posts relating my mental and physical health journeys, I received much encouraging feedback and messages from people I didn’t know, who felt, for the first time, able to open up to a stranger about something they had lived with and felt ashamed of for many years. This is the reason I choose to speak out and share as much as I do. It is through breaking down these taboos, and finding others “of our tribe”, that we feel less alone.

This is, to a large degree, the purpose behind the exhibition, Drawing Our Way Back to Health, of which this display is a part. It brings together works and texts by members of the Hertfordshire-based, mental health arts charity, H’arts in Mind, which, run by volunteers, offers free online and in-person workshops in various art forms. The group has just completed a year as community-in-residence at St Albans Museum + Gallery, and this exhibition celebrates the finishing point of this, while also looking ahead to the creative and therapeutic opportunities still to come.

The charity was begun by Kim Rasit following the death of her artist brother, David, who had been living with schizophrenia. He faced many obstacles in his life, but Rasit’s incredibly poignant work in David’s name – a six-foot coffin, decoupaged with his paintings and extracts from his CV, and with an artist’s palette and his framed photograph lying on top – finally, as she says, gets his artwork on display in a museum. Rasit describes the making of this piece as “cathartic” and adds: “For me this is a happy and fulfilling piece.” The shrine is crowned by a gravestone that reads: “Dear Grayson, sending you ‘my art’ from the grave,” as the work was in the running to be in the TV show Grayson’s Art Club on Channel 4.

Alongside the coffin, Rasit uncovers the tyranny of the benefits system by showcasing letters concerning her brother’s application for personal independence payment (PIP), which was initially declined, only to be granted, as the result of an appeal, after his death. A wordle comprising phrases built on the acronym PIP brings to mind the term “tragicomic”. But gallows humour and acerbic wit are rife in the interactions between service users in the UK, where the waits and battles to obtain the most basic of interventions, both for mental and physical health (not that such a distinction should be drawn, but, of course, it always is) drag interminably and, as Rasit found out, often fatally.

The exhibition comprises many art forms (a lot of the works were the outcome of residency workshops given by professional artists), and these myriad forms echo the voices and stories encompassed. Denise Johansen’s The Depths, for example, is a sorrowful, monochrome, drip-glazed picture of a head, eyes shut, tears rolling down the cheeks, and the strands of hair interspersed with words of despair. Only when the viewer stands to one side do the harrowing plastic shards piercing the surface become visible. These, too, incise the image with words of anguish. Johansen says: “The image portrays thoughts and feelings pouring from me. The dripping of the glaze signifies what felt like never-ending helplessness, and the shards protruding through the image are how each feeling and thought sliced from within me, causing almost intolerable pain.” What the viewer might fail to notice, but which the artist finds important to flag up, is that, beneath the dripped glaze, there are warmer colours, which signify “the real her”. This image successfully portrays both the external torment of such a melancholic affliction, as well as the way it eats away at the sufferer’s soul, permeating every last cell, until it becomes a part of them and is exuded in concert with the endlessly falling tears. Tears also flow in works such as Rasit’s Sinking and Alan James’s Wounded Love, where, once again, the whole figure seems to be dissolving with grief.

Alongside the works depicting the darker side of mental (ill) health, many of the works represent things that are a tonic to the suffering soul. Maxine Ellis’s Sea View, for example, inspired by a workshop with textile artist Anna Ray, is a brightly splattered old curtain, cut into shreds and gently fluttering against the wall as the viewer moves and breathes. “This work is about the deconstruction of the beautiful sea view,” Ellis explains, “then, once home, the reconstruction of it. It’s about bringing some of that joy back home with me.”

Also drawing healing from the seaside, Caroline and (her daughter) Sophia Abbott’s A Brush With the Ocean comprises a painting with a lighthouse, hot air balloon and plane, and a 3D underwater collage, to express the desire for freedom and a better life.

By contrast, Ron Walker’s photograph of a deep red sunset over the ocean carries a beautiful serenity, and Concentration, his photograph of a lone fisherman out at sea, offers “a single point of focus [which] can calm the troubled soul”. This cleverly segues into his duo of glass fish, titled Bookends of Emotions, which comprises a positive and a negative of the same aquatic shape, one “made of the discarded parts of the other, the same but with the emotions drained out”.

Angeline Easter’s three acrylic paintings form a beautiful and metaphorical triptych of hope and strength. In The Fear, a butterfly (Easter) is seen in its cocoon, while an evil black spider symbolises her ex-partner, and the cobweb his gaslighting. The bright pink flower is being strangled by weeds, which represent her “narcissistic” father, who killed himself by drinking weedkiller. By The Solution, the butterfly has escaped its cocoon and is perched on the petals of the rejuvenated flower, but the weeds, the spider and the cobweb loom darkly, threatening its newfound joy. Finally, however, the third painting, Freedom, shows the butterfly, with Easter’s figure as its body, flourishing and free after years of trauma and control. And, Easter adds, “being able to use my voice without fear”.

One corner of the gallery is populated by ceramic and painted cloth cats by Alex Devlin and DJ Cousins (which, comically, set my emotional support dog growling!). Cousins’ black trio, entitled Curiouser and Curiouser, is “exploring possibilities, before hopefully one day deciding and refining its form. […] I guess we are alike”, while Devlin’s somewhat bedraggled looking trio, Feline Fine, are described as “see, hear, speak cats”. She expands: “At times I cannot see – as a result of my visual impairment. At times I cannot hear – as a result of my epilepsy. At times I cannot speak – as a result of my anxiety. These cats may personify my disabilities, but they were born out of the fun and creativity I explore through art every day.”

Devlin’s ceramic work, Boss Cat – a fat ginger tom in a jacket and tie, with a bushy moustache and brows – embodies a sense of this humour and play. She, along with the other members of the group, gives heartfelt thanks to H’arts in Mind for the opportunity for such experimentation, exploration and (self-)expression. This gratitude to the charity, as well as to art itself, is also apparent in the five-foot-tall, fun paintbrushes, standing in a pot by the entrance, which were created for a partnering with St Albans Comedy Garden earlier in the year.

Finally (there are many more works and stories than I could ever begin to share here), equally if not more imposing, the eight-foot-tall, black furry monster by the doorway can hardly be overlooked. While Winston Churchill famously described his depression as “the black dog” (a coinage that has become regular currency), for Mike Pedley, it is this monster-like bear, Hank. At once both terrifying and comforting in appearance, the short film playing alongside its protagonist follows a man called Luke as he attempts to go about his day, ever thwarted by Hank coming out of the shadows to torment his mind and make “normal” interaction and comportment well-nigh impossible. Watching this fated union play out makes it clear just how entwined we our with our mental (ill) health, and how, even if we can improve it or manage it with therapies and/or medications, we are never truly free of it. Moreover, as Katie Spencer points out, in the text to accompany her arresting painting, It Has Many Faces: “… mental health can happen to anybody at any stage of their lives. People who appear to have everything can be secretly battling this illness as can anybody else. Mental health is non-discriminatory.”

So why does talking about our mental health remain such a taboo? And why do exhibitions such as this require content warnings and suffer the absence of promotion through the usual museum PR channels? (In this instance it was even queried whether a preview night was wanted by the artists, as the museum would not be issuing invitations to the usual local dignitaries.) Society needs more groups like H’arts in Mind, enabling people to come together and share, and recognising that, where words alone might fail, creative outlets can prove invaluable, not only for those concerned, but for all those who might have an opportunity like this to see and really think about these silent voices. Paying lip service is not enough; starting an open, honest and raw conversation about the state of our nation’s mental health is so desperately overdue.

• For more information on the charity, visit H’arts in Mind.