In this bold collection of paintings, the Argentinian artist demonstrates his “cubistoid” style, creating abstract worlds informed by geometric rigour, into which he intersperses more figurative details 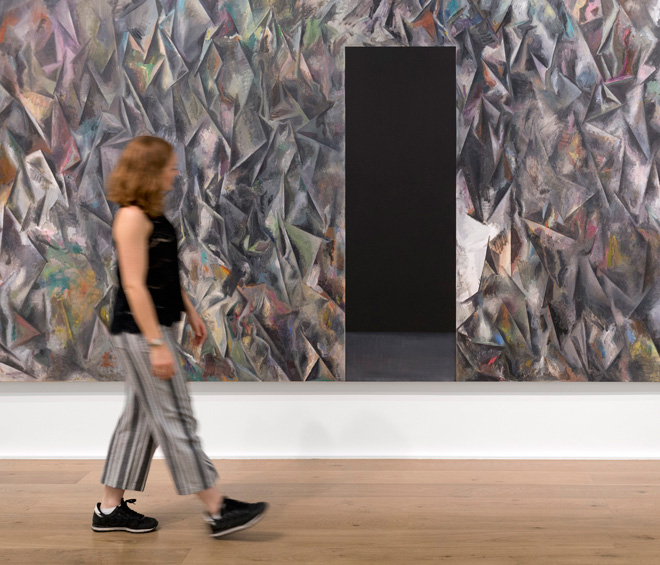 “Since Malevich, it’s been easy for artists to make objects with little meaning, or, at least, creating meaning is at the viewer’s own risk,” remarked Guillermo Kuitca, in conversation with Hans Hurch, director of Vienna International Film Festival, at Hauser & Wirth London in May. “I’m trying to provoke the idea that there’s meaning in these figures.” In this bold collection of paintings, the artist delivers on his aim: visitors will discover mysterious female forms, turned away and with shielded face, lit by moonlight or refracted into sharp, metallic ridges and shadows.

Kuitca was born in 1961 in Buenos Aires, and is one of Latin America’s foremost contemporary artists. He held his first exhibition at the Lirolay Gallery in Buenos Aires when he was only 13 years old, and went on to represent his country at the 2007 Venice Biennale. Throughout his career he has worked with a broad sweep of visual frameworks, from theatres and maps to architectural plans and musical scores, while remaining loyal to paint as his primary medium. In this exhibition he demonstrates what he terms his “cubistoid” style. Kuitca draws on the language of cubism while disregarding its key aim, the search for more comprehensive representation of physical objects; instead, he creates abstract worlds informed by geometric rigour, into which he intersperses more figurative details. Strongly influenced by the work of German avant-garde choreographer Pina Bausch, Kuitca creates the structure of many of his abstract works by flitting to and fro across the canvas, making bisecting strokes as he passes, enacting Bausch’s instruction that “in dance, walking is enough”.

Entering the main room of the exhibition, attention immediately falls on what appears to be a rectangular door, grey with touches of peach, complete with doorknob and glowing keyhole, leaning against the gallery wall. As visitors move closer, the shift in perspective reveals the work’s true form: a parallelogram. The door’s strange contortion implies action and movement, a ghostly presence that has just passed through – or is about to do so. The plot thickens: attentive visitors will notice that there is a set of numbers, 11:42, written below the keyhole. Speaking to Hurch, Kuitica noted that, for him, these figures “probably” represent a time, but that his aim was to insert some Hitchcockian drama into the scene, inviting attendees to form their own dramatic narrative.

This thread is picked up again in the exhibition’s standout work, Untitled (Exodus) (2015), its (quasi-) title implying similarly unseen dramatic action. The work’s scale is formidable at more than six metres in length, with a central rectangular void flanked by wings of prickly, angular marks. This could be a door, a passage, or even a window (Kuitica remarks that galleries do have a tendency to hang paintings higher off the floor than artists envisage). The central emptiness offers a mesmerising liminality, set within a kaleidoscopic scene that at once resembles mountains, crumpled fabric or crystalline carapace.

Separated by a wall, but facing the same direction, is a work of reduced proportions but of a similar structure. However, the background surrounding the passage here is composed not of considered geometric shapes, but chaotic gobs of vivid colour. Kuitca describes the unfiltered energy of this painting as something new to him, terming it an “alphabet” that forms the basis for the larger work behind. But you would be wrong to describe it as a study for Untitled (Exodus). Kuitca says that he regards studies as something to be done not to prepare for what he is about to do, but to understand what has already been done. Thus, he labels another artwork, created after Untitled (Exodus), as a study for that work. Reproduced on the exhibition’s welcome card, it is a more restrained painting featuring a deep maroon portal set against a pink floor and a wash of muted lavender.

When asked whether he ever imagines his artworks to be displayed in relation to each other, Kuitca said “[his] artworks are created as orphans”. It is perhaps unfortunate, then, that the study for Untitled (Exodus)is somewhat overpowered by an adjacent work, a large, arresting painting of turbulent yellows, greens and reds. This is the oldest work on show, having been started in 2003 – he “completed” the work several times over, each session returning to add new detail: rippling filaments of lurid colour seem to descend and invade frenetic architectural plans, before themselves being subsumed by harsh vertical slashes of paint. This is the artist in dialogue with himself across different phases of his career.

So how to tell when a work is truly finished? To Kuitca, it’s an “instinctive thing”. He argues that the proverbial “abyss” of the blank canvas is rarely present at the start of the process. To him, that abyss is reached at the end: the creative potential of the work fades until it disappears, and he knows there is nothing more to be done. This exhaustive approach is certainly evident in this exhibition: there is an impressive quantity of visual ideas on show, from a female Jesus, to an “eye of God” surveying cubistoid pyramids, to spectral female reflections inspired, according to the artist, by Ingmar Bergman’s seminal work Persona. Kuitca describes his work with colour using the analogy of a trombonist with a mute: his instinct is to be generous, then reduce into subtlety. The result is a great range of pigmentation, but somewhat muffled, and blended with great delicacy. Clearly, there is much to be found in the shadows. 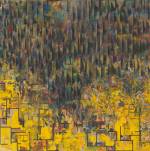 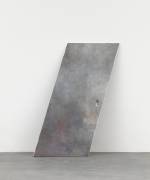 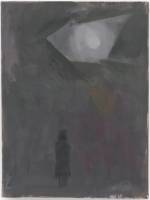 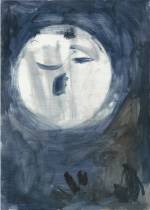