Go Figure! curated by Dr Claire Roberts presents 55 works, including painting, drawing, sculpture, photography, video and installation works by Chinese artists from 1979 to the present. Roberts, presently Senior Lecturer in art history at Adelaide University, has been involved in Chinese contemporary art since the 1970s. Her exhibition, at the Art Gallery of New South Wales (AGNSW) in 1992, brought some of the most exciting work by Chinese artists to Australia. Go Figure! is a remarkable exhibition, accompanied by a scholarly catalogue edited and written by Roberts, with key essays by Eugene Wang, Zhang Letian and Introduction and Foreword by Louise Doyle and Gene Sherman. 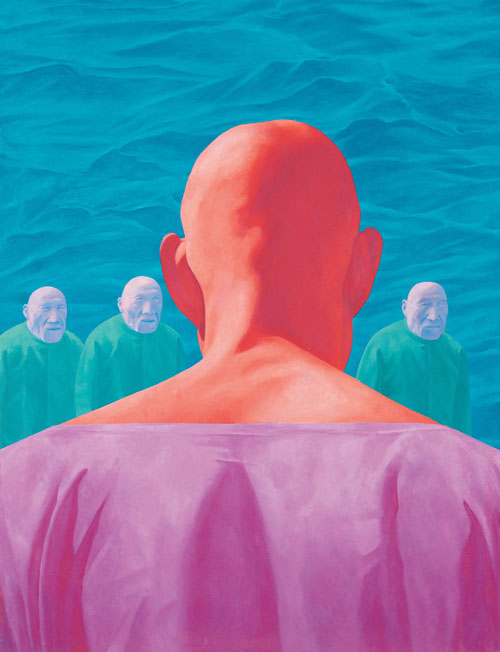 Uli Sigg first travelled to China in 1979, following the damaging Cultural Revolution. The announcement of an “Open Door Policy” came as part of the broader project of “Socialist Construction and Modernisation”. Since 1979 Sigg has travelled to and lived in China for extended periods. He held the position of Swiss Ambassador to China between 1995 and 1998. He soon realised that he was in a strong position to form an archive of art, not limited to a single medium or style, primarily to document the period of spectacular change and economic growth in China, from Communist and closed to the rest of the world to one of the most powerful countries in the world. Recently in Beijing, I asked poet Zhao Ye, what the best publications on Chinese art were, which he found amusing saying: “we need another five years, before that will exist.” The catalogue for Go Figure!, which I discovered two weeks later in Australia, is just one of those “best publications”, (along with other excellent catalogues for exhibitions such as, Another Long March: Chinese Conceptual and Installation Art in the Nineties,)1 presenting the complex recent history of Chinese Contemporary art in an accessible and highly scholarly manner.

In a 2008 interview, Uli Sigg describes his collection as a “document”, and as his means of “accessing China”.* The Sigg collection numbers 2,200 works by 350 artists. It should he says, ultimately be housed in China, thus enabling the Chinese people to observe for themselves, the remarkable, life-changing period of history. Claire Roberts points out that at the moment this observation cannot be made for though in recent years “significant private collections of contemporary Chinese art have developed within and outside mainland China but none… rival the size, depth and breadth of the Sigg Collection”. 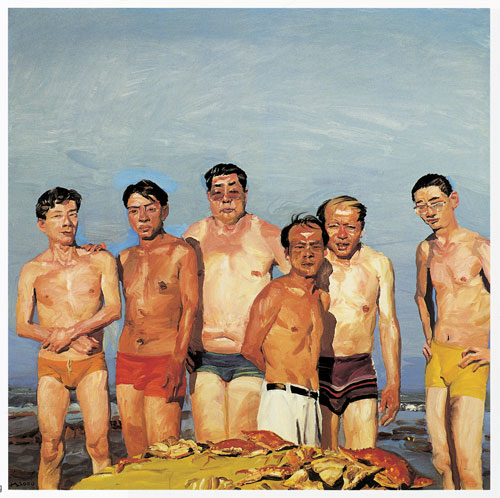 In June 2012 it was announced that the greater part of the collection would indeed be donated and housed in the private museum M+, in Hong Kong, due to open in 2017. When interviewed by Roberts, Sigg addresses the fact that a “document” such as his collection does not exist within China. "The major issue here is that contemporary art can contribute to the development of contemporary culture in China, yet there hasn’t been full acceptance of this crucial view in China at official level. Contemporary art is by nature often political, responding to current conditions, and can come across as being quite critical as opposed to the traditional Chinese paradigm where art is about beauty and harmony. Furthermore, the Chinese authorities are quite sensitive about how art may shape the perception of Chinese reality domestically and abroad. Therefore Chinese government institutions and museums have abstained from collecting most contemporary art production, with the exception of a narrow segment of practice, what you would call academic art". 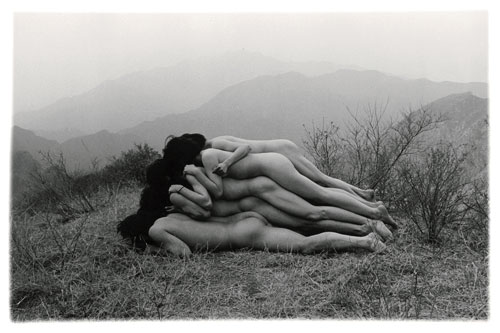 Roberts addresses the question of what level of knowledge and understanding the Western viewer of Contemporary Chinese art, needs of Chinese culture and history. The establishment of such a context for viewing a fully appreciating the work is complex, and complicated by the limited access by the West during the Cold War. Sigg discerns two directions when it comes to the understanding of Chinese art by Western audiences: “I would call one of them ‘world art’, meaning that art is accessible to anyone and that knowledge of Chinese reality or history is not necessary. This covers works that have to do with basic human subject matter, pre-conceptual things, and formalist issues. Art of this kind may or may not make any specific reference to China. Then there is a second thread of works that do require some knowledge of the Chinese context. For example, if a work deals with the government’s one-child policy, you won’t be able to understand the work in the way the artist intended. You can still like it but for the wrong reasons." 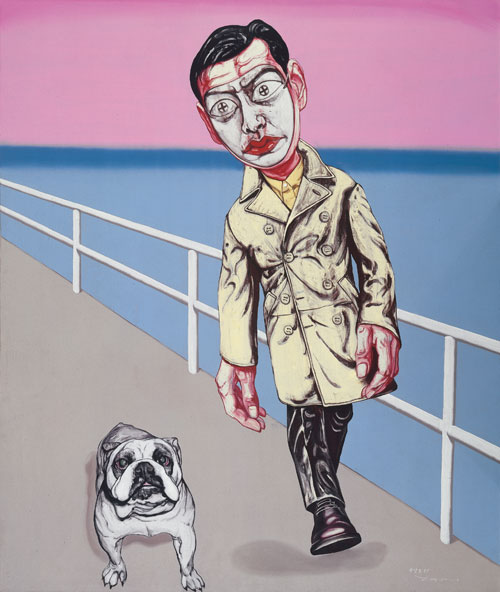 Sigg has enjoyed close friendships with artists in China, a fact that he considers an important part of his collecting process, not a factor that might impair his judgement. Unlike in the West where the dealer shields the buyer from the maker, Sigg finds that contact with the artist enables him to "recognise authenticity and honesty in a work, or its absence, which for me, is one of the most important criteria for collecting. These many friendships greatly enrich my life." Sigg has also engendered a dialogue between Western critics, such as Harald Szeemann, by introducing them to Chinese art, also enabling particular artists in China to be recognised who were otherwise overlooked by the West. To impact the powerful hegemony of Western art at events such as the Venice Biennale and Kassel Documenta, Sigg established the Chinese Contemporary Art Award in 1997, and in 2007, the Contemporary Chinese Critic Award: "I had two things in mind: to lure important international curators to Chinese art; and to stimulate debate within China as to what constitutes meaningful contemporary art and what does not." Chinese artists first took part in the Venice Biennale in 1999, and the Critic Award has enabled independent writing and research on art to be carried out, independent of the market. Initially criticised for being a Westerner playing power games, Sigg soon assuaged the view by explaining how he had come to acquire knowledge of Chinese culture; he has long emphasised that the Awards should be Chinese owned initiatives. 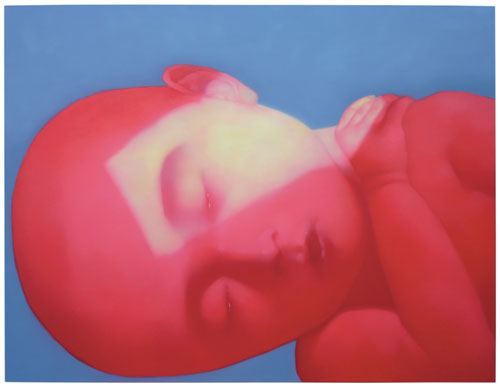 Roberts asked Sigg how he viewed contemporary Chinese art within a global context.

"The differences between Chinese and Western art have changed with time. In the beginning, after 1979, Chinese art was politically charged, much of it created in conflict with and rubbing up against the repression of the political system. This art was distinctly different from that produced elsewhere. It documented and reflected on Chinese reality and was made with very limited interaction with the outside world.. The situation is very different today. Contemporary art has risen out of the underground and even made it into popular people’s magazines. The former ‘enemy’ creating resistance and tension has largely disappeared and the pressures of the art market is mounting."

Artists are now able to travel and to lead lives similar to their counterparts in the rest of the world. Access to the internet has made a great impact, and art with a distinctly “international” flavour becoming “global mainstream” rather than Chinese. Sigg has sought through exhibitions to reach a wider audience for his collection and for Chinese art: “I see the 2,200 works as material that can be mined in many different directions. I also want to provide an interested public with another access point to China through its contemporary art, one that is more tangible than digitally transmitted images in our media. Exhibitions allow us to better comprehend the complexity and diversity of this world power-to-be".

Portraiture is used as a means to establish, a better understanding of Chinese society. Portraiture is defined broadly as Roberts clarifies in her catalogue essay:

“Go Figure! Contemporary Chinese Portraiture brings together works by Chinese artists who engage with the circumstances of life in China today through portraiture, broadly defined. In this context the portrait of a figure or a face becomes a means to express larger concerns about the situation of China and its people in the present. Many artworks manifest an almost obsessive concern with the Chinese condition (physical, spiritual, existential), referencing the self as well as people and events from China’s rich and complex cultural past. Portraits take on many forms and make use of a wide variety of media, ranging from oil painting, sculpture, and new media, to the artist’s body stripped bare. Some are self-portraits, portraits of individuals, of friends, or of a collective group. But they also depict aspects of the country and culture as a whole. The artworks may be likened to a skin a sensitive surface upon which artists record ideas and questions, probing and complicating our understanding of the changing ‘face’ of China”.2