During the Covid-19 pandemic, reflecting his concern with the fragility of our environment, Orozco began to create an image of the plants around him each day in a small notebook, his work a curious mixture of precision, accident and downright messiness 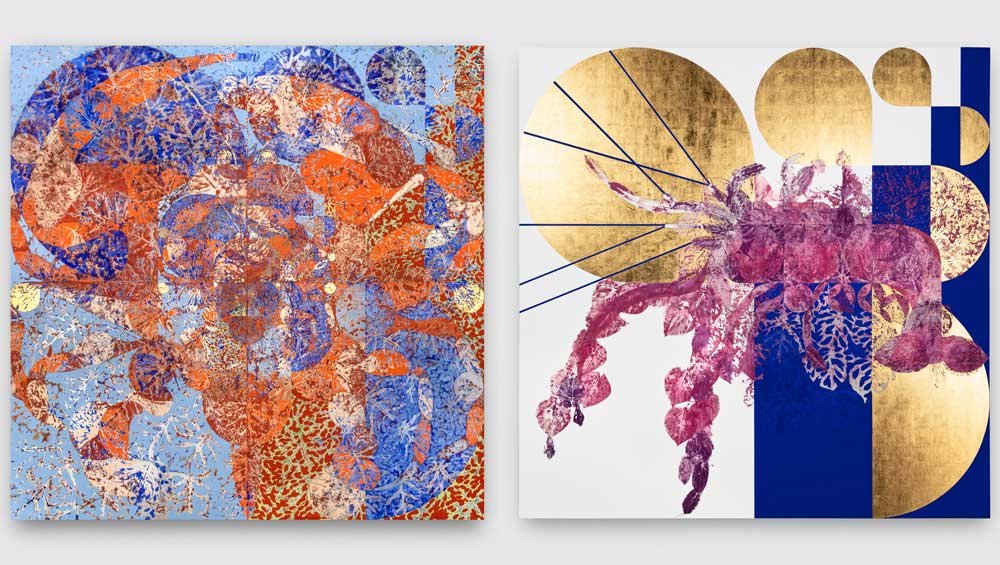 Diario de Plantas (Diary of Plants) is an exhibition of new work by the Mexican artist Gabriel Orozco (b1962). While Orozco’s practice spans sculpture, installation, photography, painting and video, this exhibition includes only paintings, drawings and watercolours. The works were developed from the process of imprinting. Working with the native plants around the cities in which he lives and works (Acapulco, Mexico City and Tokyo), Orozco explores the fragility of our ecosystem. The delicate relationship of everyday objects to one another, to the natural world and to human beings, has always been Orozco’s main subject of interrogation and these new works are no different in that respect. 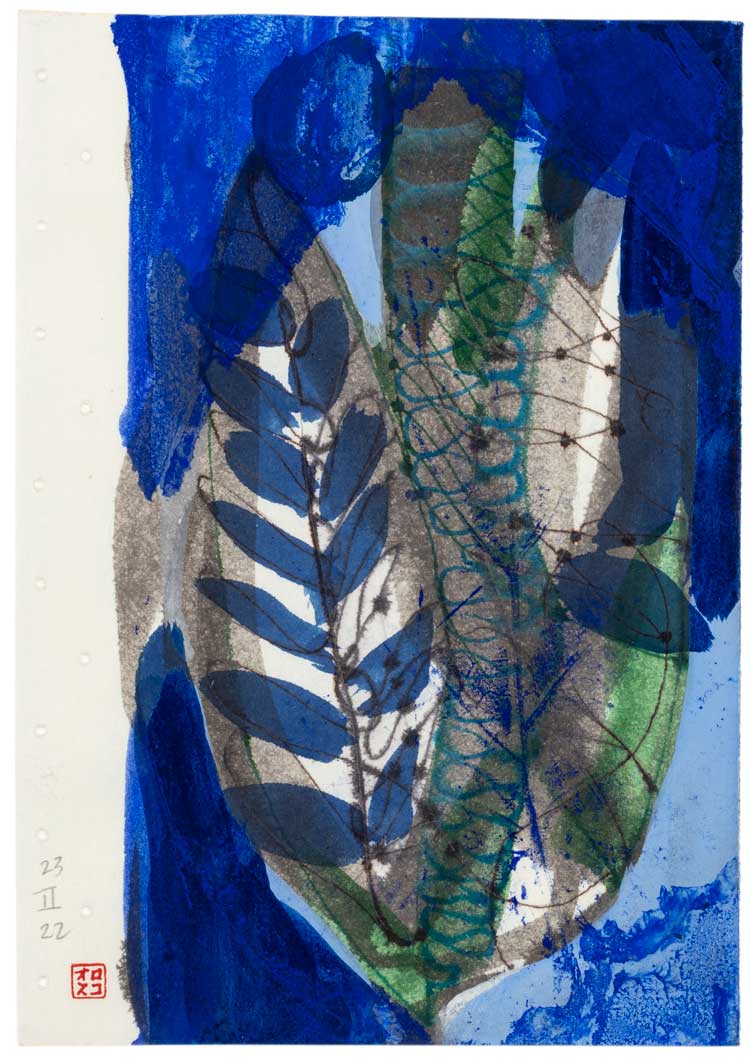 The artist began making the works during the Covid-19 pandemic, creating a diary image each day from the plants around him. He first made these in Tokyo in small Japanese notebooks and continued when he moved elsewhere, mainly in Mexico City. It was only when the images accumulated over time that Orozco began to see them as a collection, a diario de plantas. While not diaristic in the sense of recording chronological events that differentiate one day from the next, each small image does, in some respect, mark time. Each image is numbered and carefully dated in pencil, with a small red Japanese-style hanko stamp acting as a signature, or authentication of sorts. 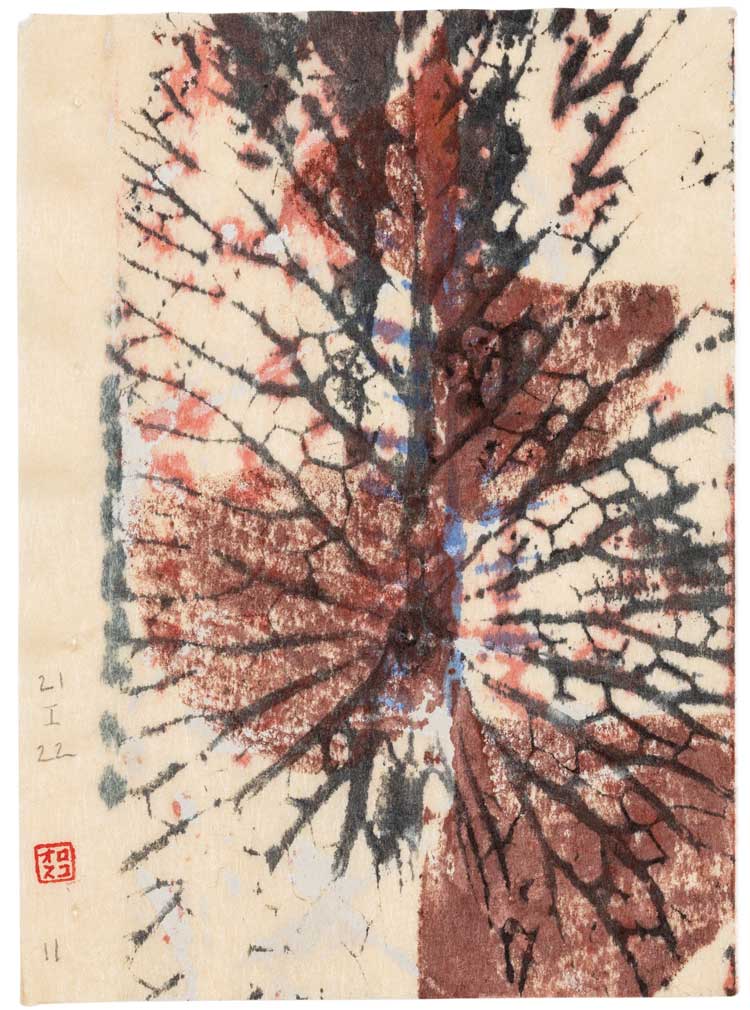 The neatness and clarity of the stamp and date are in contrast to the provisional nature of the images themselves. Each image shows the imprint of a leaf in the same very simple way that a child might make a print of a hand, finger or plant. Yet Orozco’s images go far beyond that sort of simplicity. The colour and density of paint varies across the series and within individual images. Sometimes, multiple leaves are used, overlapping and leaching out into one another. Images might be sparse, leaving much of the small page empty, or they might be densely layered with paint in a manner that, at points, obliterates the first imprint laid down on the page. Other images are adorned with doodles, often a figure of eight across their surface. It is difficult to know if this figure of eight has any significance. However, it would be reasonable to consider it as a potential symbol for infinity and the cycle of ecological problems in which humankind is entangled. Yet more images appear almost as Rorschach ink blots, lending a heightened psychological aspect to them. As Briony Fer notes in her exhibition text, the pages of the notebooks Orozco uses are made of soft and absorbent paper. Therefore, his colour medium sometimes leached through the page, making a mark on a subsequent page that became the beginning of the next day’s image. 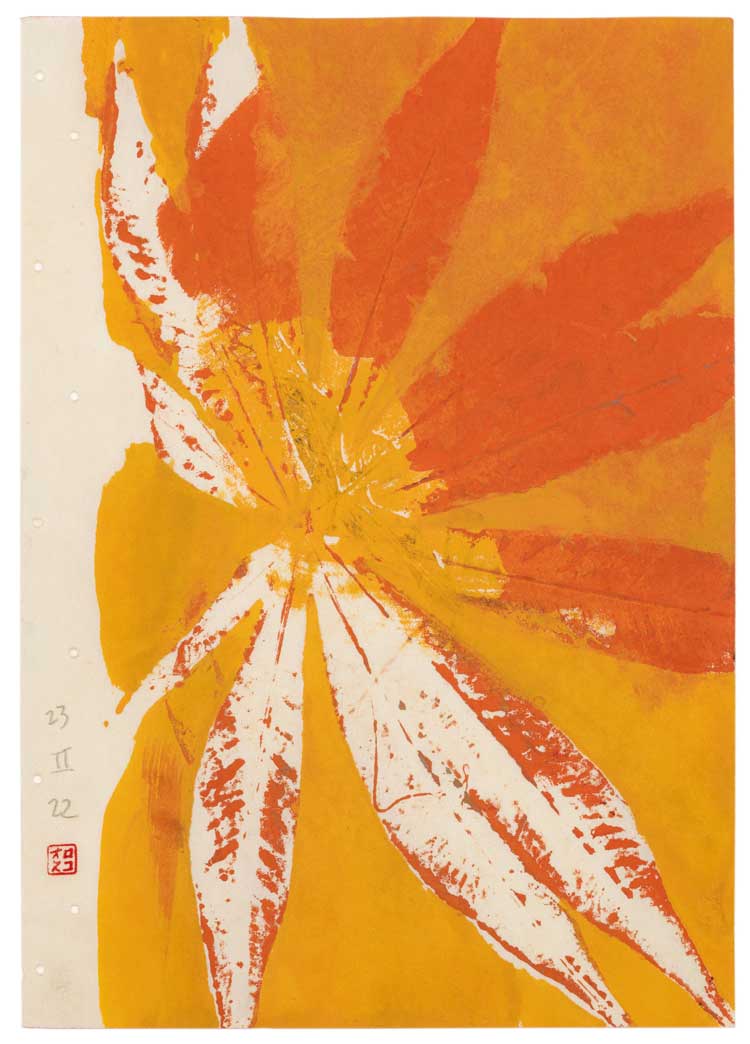 
There is a curious mixture of precision, accident and downright messiness in these images. There is a degree of faithfulness when it comes to the leaf veins, for instance, simply and clearly printed on the age. There are the accidental marks that have seeped through the page from previous images. Then, there is the layering of other leaf prints and the doodles and other mark-making on top of that. Or, as Fer explains it: “It’s as if the page is a site of humidity where the leaf prints create their own form of automatic drawing as a combination of graphic pressures and chromatic flows.” I would want to add that the condition of each site, or page, is not clear. There is a sense of growth in images that suggests a lush space of flourishing vegetation. However, there is also a sense of decay among the tangled mess of overgrown and struggling natural spaces. Sometimes, growth and decay co-exist in a single image, as indeed they do in the natural world. 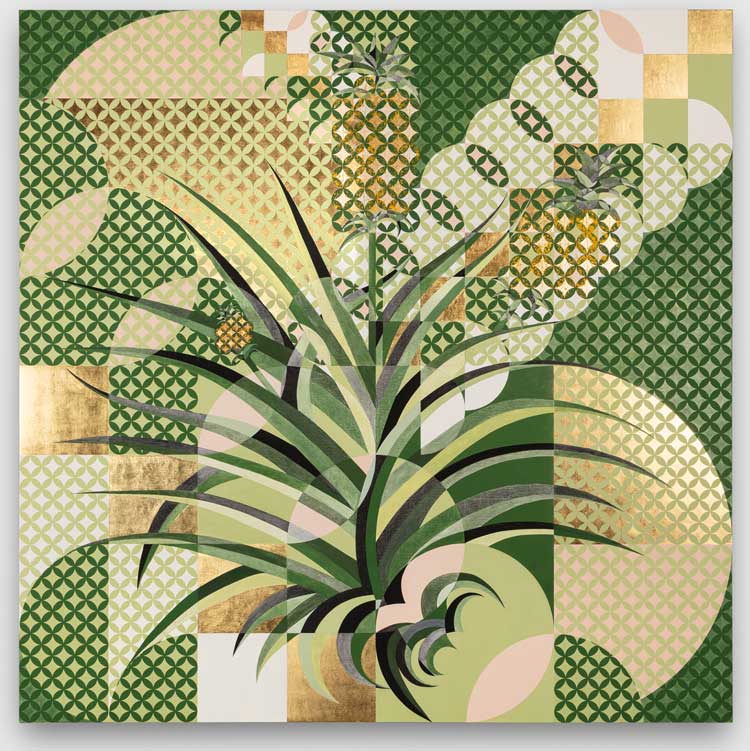 The organic progress of development, decay and redevelopment that is evident in Diario de Plantas is mirrored in Orozco’s The Chapultepec Forest Project (not shown here), begun in 2020. The project was conceived of by Orozco at the invitation of the Mexican president and is now under development by the Mexican government. Through environmental, cultural and social interventions, the project aims to connect the 800 hectares that comprise the four sections of the Chapultepec Forest in central Mexico City. Even if this huge public project stands in contrast to the small intimate works in Diario de Plantas, both deal with similar themes and are exemplary of Orozco’s environmental concerns. 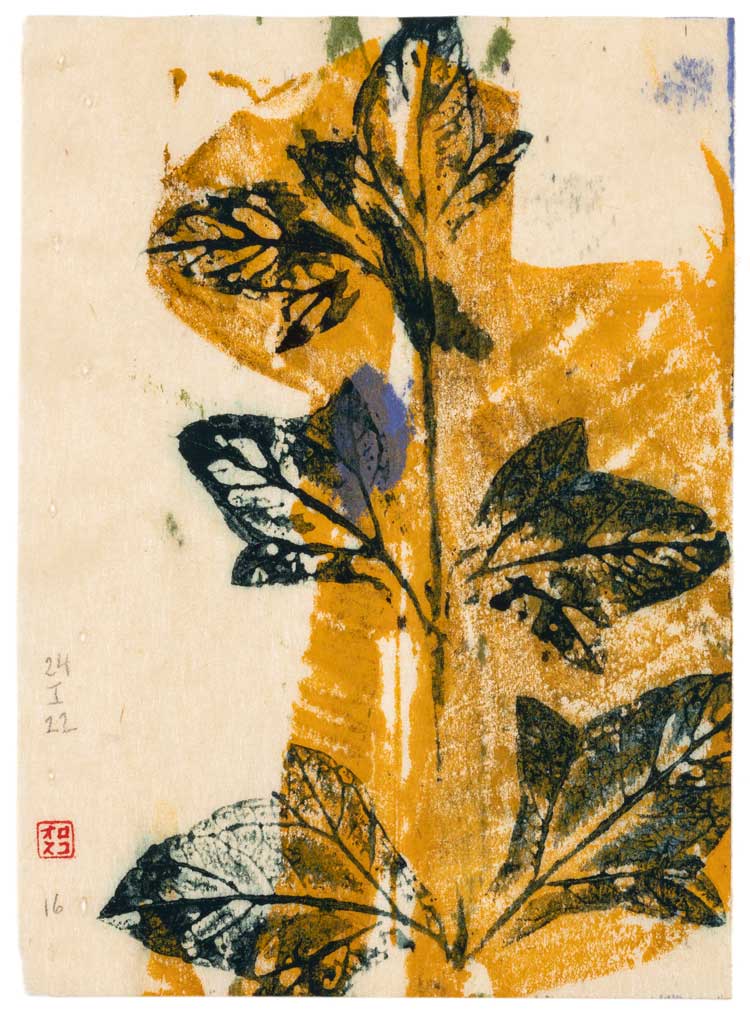 The selection of diary pages made by Orozco for this exhibition seem, at times, to reflect the seasons of the year through their colour palette. Of course, this may be entirely coincidental. Some larger paintings develop the themes of the diario and punctuate the exhibition with images that appear more assured than the small notebook plant prints. Using tempera, and sometimes gold leaf, on linen canvas, Orozco transforms the themes of his simple daily doodles and paper prints. The provisional nature of those prints, those sites of humidity, as Fer puts it, now appear fixed or static on the canvas. In some instances, such as Pepper Plant (2022), the composition seems more akin to graphic design than anything else. I’m not sure these paintings added anything interesting to the fragile ecological narrative already articulated so well in the diario pages. Sometimes, it is the small provisional works that have more to say. Orozco’s commitment to creating an image each day in his notebook is important too. It demonstrates ecological respect, one of the guiding principles of The Chapultepec Forest Project and, it would seem, Orozco’s work more broadly, even when it begins on a small and intimate scale. 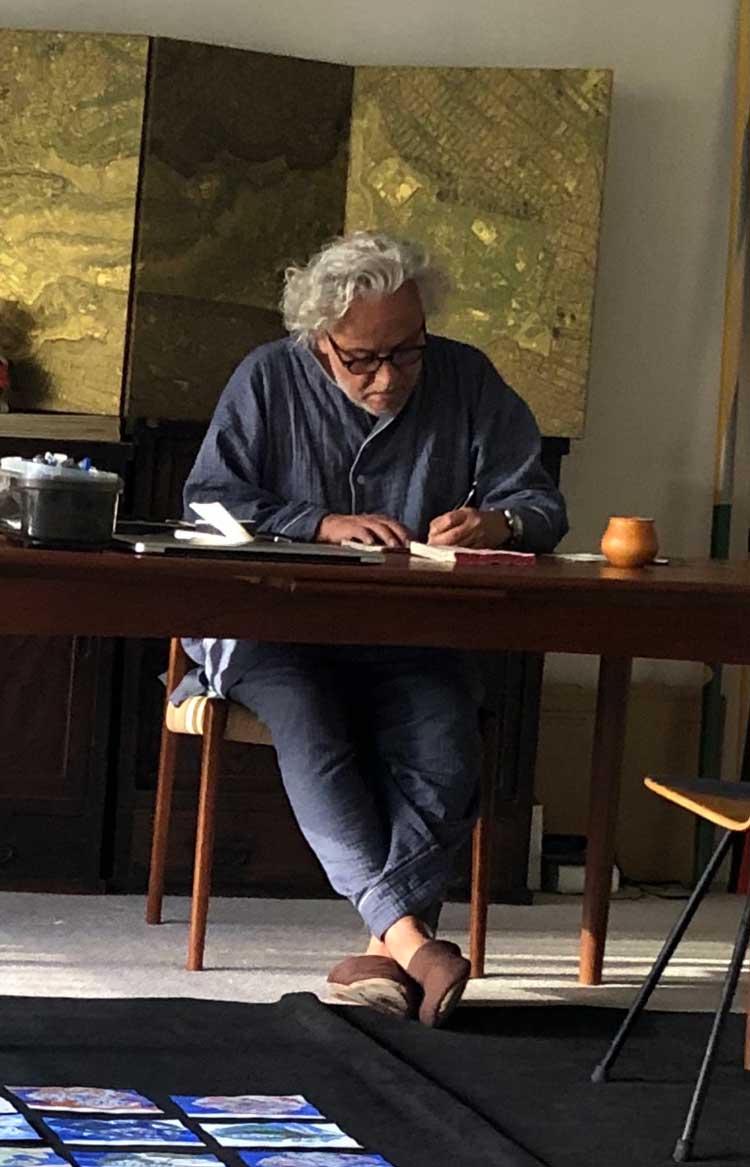 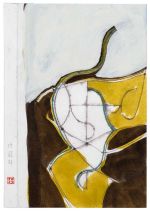 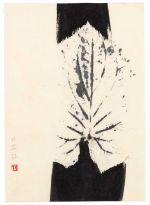 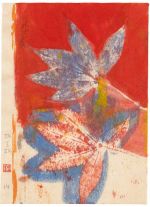 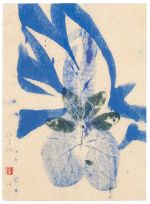 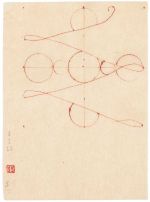 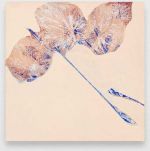 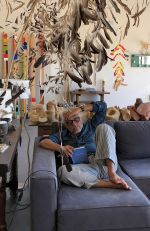