Since the 1980s Mexican artist, Gabriel Orozco has been making “work” – and it can only be described in such general terms – that redefines our notions of the sculptural, the painterly and the photographic. Not only in combining these media, but in seeking his inspiration and often the physical components of his works in the surrounding environment of daily existence, Orozco has regarded the everyday object and our encounter with it as a springboard for conceptual and material production. If not radical, following as it does a long legacy of art’s approach to the found object, Orozco’s work is sculpture for a new era: one defined by globalised culture and lack of geographical specificity as well as by a far less formal and serious relationship with the object that is only possible in an age dominated by “things”.

Our first encounter with Orozco’s work in Tate Modern’s current retrospective summarises this approach: My hands are my heart (1991) is a sculpture formed by the artist squeezing a piece of clay with his two bare hands in a way that creates a new object in the shape of a heart. Orozco implies that sculptural objects are formed as much from careful crafting as they are from the chance impressions left by the body on the world. If it is the case, as Jean Baudrillard stated in the 1980s, that while modernity had foregrounded the subject, post modernity would see the emergence and power of the object, Orozco’s work in an era following modernism and postmodernism can be understood as a conflation of the two – object merged with subject. Tate’s show presents an oeuvre that combines traditional notions of craft with the found object, conceptual sophistication with unexpected encounter.

This is evident in Orozco’s many photographs of chance situations, such as Cats and Watermelons (1992), which possess a subtle humour that reflects Orozco’s patient observation of his surroundings. It is also clear in larger sculptural pieces such as Elevator (1994), for which Orozco resized an old lift to fit his own vertical proportions. Stepping from the gallery into the lift space produces a feeling of claustrophobia and intense interiority that highlights the original function of the space while rendering it redundant. As Orozco has said: “The interior of an elevator is its exterior … the illuminated part, the clean part, is inside, and everything outside it dust and grease. Taking it outside a building is like turning the peel of a half orange inside out.”1

At the heart of Orozco’s exploration of object relations is a geographical itinerancy that has permeated his career. Having worked in Costa Rica, Brazil, New York, and Paris as well as his native Mexico, Orozco has developed an international language for his encounters with objects that accounts as much for their visual as for their conceptual diversity. Tate’s exhibition emphasises this element of Orozco’s work in placing his famous Le DS at the centre of the show. Orozco made this work in 1993 by cutting a classic Citroën DS into three parts and removing the central part to leave a long, slender version of the car, one whose apparently heightened aerodynamism is at odds with its ridiculous appearance.

Displayed alongside the impossibly elongated form of Le DS is another work which takes travel as a theme, yet arguably articulates it more clearly. Four Bicycles (There is Always One Direction) (1994) consists of bicycles dismantled and reassembled to form one large, incomprehensible machine, with each bicycle seeming to pull away from the whole. The work’s tangled structure speaks not only of a means of getting to a place, and the element of choice involved in travel when faced with limitless possibilities, it also produces an inherent stasis that accurately reflects the inertia experienced when an individual is overburdened with choice. In such situations, and in Four Bicycles, the object of speed and movement is rendered useless by the subject’s lack of volition.

Orozco’s physical itinerancy is matched by an historical one that has seen him drawing on a wide range of influences in the history of 20th-century sculpture. Most notable among these are, on the one hand, that of Marcel Duchamp, who excavated from the found, manufactured object a form of wit that was dependent upon a thing’s physical shape as well as the situations in which it was placed; and on the other hand, the monumental seriousness of Minimalism, with its focus on materiality and visual power. In combination, these influences have driven Orozco to produce work that is at once humorous and high-impact, and which involves daily experience in the process of art-making without divorcing it from traditional forms of production:

“If the artist does not make, it means there is no process (no research) there is just production. And the artist’s brain dries out, because it is in the mistakes and accidents of the process that we get the ideas for the work to follow.”2

It is his conflation of process and production that lends Orozco’s work its peculiar quality: a graceful boldness that has allowed his art, despite its variety, to represent a new generation of object-making. The room devoted to Orozco’s Atomist series (1996) is an elegant demonstration of this: Atomists consists of sports photographs taken from popular newspapers and visually doctored by Orozco, who has added coloured circles and lines in gouache to emphasise the essential compositional framework of each scene. In the same room, The age of GO’s (2005) jet black circles and the stunningly detailed drawings in the series First Was the Spitting (1993) (so-called because they were inspired by the shapes formed by mouthfuls of toothpaste spat onto the paper) provide further evidence of Orozco’s fusion of abstraction with signification, a boundary which he believed barely existed.

Yet the curator has chosen to display these studies of circular abstraction alongside another of Orozco’s more bold pieces, Ventilator (1997), formed from strips of toilet paper attached to a ceiling fan that swirls with silent ease in a circular motion and mimics the painted circles below it. Played off each other in such a way, these works appear powerful yet understated: Orozco’s ideas are both clearly present and subtly realised in form. If, as Benjamin Buchloh suggests in his catalogue essay Sculpture Between Nation-State and Global Commodity Production, Orozco’s work can be conceived not as sculpture pure and simple but as “sculptural experience”, as a relationship between viewer and object, then Tate’s retrospective has successfully drawn this out.3

The bold grace of Orozco’s work is typified in the final room of the exhibition, with his installation Lintels (2001). Here, sheets of lint collected from washing machines hang in grey dullness from lines strung overhead. Passing under these sheets to exit the exhibition, viewers are forced into proximity with their hairy, dusty, yet by definition clean surfaces. From afar they appear soft, painterly and fairly nondescript; from below their caked yet visibly disintegrating forms merge into the air we breathe and threaten to drop onto our faces. This is certainly “sculptural experience” at its most powerful – a direct encounter between humans and a material that is made up of their skin, their hair, but which, gathered together, becomes alien and repellent. 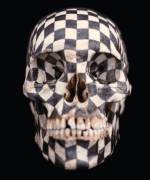