From a shiny Jaguar E-Type, explosions of colour and a trip through a more muted palette, MoMA has served up the 60s as a tasty new dish, charting the era’s subversive investigations into traditional form, media and design

Although far from a blockbuster or critical darling, MoMA’s exuberant challenge to clichéd assumptions about an era that burst the cultural membrane has been steadily seeping into Manhattan’s cultural conversation. Against all odds, the resolve of a storied institution to scramble a decade’s hallowed eggs has reworked a venerable recipe into a tasty new dish. With a licence more readily extended to artists, more than a dozen curators, led by department heads Ann Temkin, of painting and sculpture, and Martino Stierli, of architecture and design, were given full rein to plumb MoMA’s unparalleled trove of 60s material to tell a fresh story, one infinitely less tidy, more complex and more nuanced than a lazy media and pat scholarship have sold to the public over time.

The bold brief to mix up and pare down nine years of innovation and impact to some 200 artists and 370 objects was complicated by the s­ubtle institutional dynamics of curatorial seniority and departmental pecking order. Smoothing all feathers was the overriding mission to bring a fresh eye to an old trope. Could mixing up iconic works with material mined from MoMA’s holdings for their unfamiliarity or otherness shake up art history’s narrative of a collective irreverence erupted full blown into a free-wheeling 60s aesthetic? For months, on a ping pong-sized table, miniature paper models of paintings, sculpture, sketchbooks, posters, multiples, film, design objects and furniture brought up from storage were shuffled around spaces collapsed or expanded to accommodate colliding priorities. Should an architectural model command so much square footage? How might a camera-less photograph by the progressive Prague intellectual Kolářová relate to a Lucas Samaras sculpture of a book pierced by pins, glass, knife and scissors? Can something new be conveyed by bringing video material (John Whitney) in close conversation with a package wrapped in twine (Christo)? What meaning derives from circling the real-life artefact of a convertible with pop objects by artists become the era’s celebrities?

The shakeup is energising and at times even jarring, but don’t get me wrong. This is no temblor; rather a series of small shocks delivered through the juxtaposition and contrast of disparate mediums, subjects and artists. Nothing so tidy as a room displaying the Ferus artists. Or as digestible as a formal display of “road art”.  To recap the decade that blew apart and reworked the entire practice of art-making called on congruent presentation. The only concession to categorisation is chronology, though even ticking off that box seems spurious, since several artists and techniques are reprised (coming round twice are a number of the era’s idols, all notably American – Richard Serra, Eva Hesse, Andy Warhol, Cy Twombly, Jasper Johns and Ed Ruscha – and all of whom straddled the decade) with Warhol, Robert Rauschenberg and Johns crowned to bookend the show.

Given that little besides the dateline connects Louis Kahn’s unrealised cardboard study for an assembly building in Bangladesh with Claes Oldenburg’s soft sculptured ice-cream cone and Niki de Saint Phalle’s mixed media on wood,  grouping by year seems to function primarily as an organising mechanism, marking curatorial choice as more precisely the point. The fact that curators were recruited from all six departments (many quite young, with fresh energy and ideas) negates the horse-into-camel disdain for decision by committee, and makes a strong case going forward for the merits of interdisciplinary show-making.

As with the ticket pulled from a hat, the artworks making the cut determined the winners, or in this case the dialogue. Given so seemingly arbitrary a selection from MoMA’s deep collection, I can only walk you through the highlights as I experienced them and impart the impact of the 60s contribution as my brain reassembled it. Signposting the shakeup, a massive John Chamberlain crushed-car wall sculpture announces a wet-dream Jaguar E-Type roadster positioned front and centre to shine its silver spokes on to Rauschenberg’s blown-out tyre, its headlights on to Andy Warhol’s rendering of a gas water heater, its side-mirror on the steel baking pan bedded into a startlingly black Donald Judd oil painting, and its shiny tailpipe on to the blackened orifice of a wall sculpture by the recently resurrected Lee Bontecou. Opening statement made, the following years present with less flash, more focus. Expectations of unbridled colour are met with rigorous restraint, as with a pastel Twombly painting, a dusty Yayoi Kusama chair, wispy drawings by Dieter Roth and Arthur Köpcke, and a grey iteration of Josef Albers’s serial Homage to the Square. Crowd-pleasers they are not – “dour” is the floated word – but they rework the mantra. Qualifying the vivid palette so closely associated with the 60s disruption serves to highlight the era’s equally subversive investigations into traditional form, media and design. Grey concrete, watery resins and bland planks laid the foundations of conceptual art: Alex Katz, become numbingly ubiquitous, is shown here as pioneering a new way of seeing through the flat surfaces of a portrait rendered in stark black, grey and white.

The curatorial point made, you are rewarded with explosions of colour. Kenneth Anger’s stirring Kustom Kar Kommandos video brilliantly engages sound, movement and fluorescence to impart the era’s deepening homoerotic obsession; once again and at long last, James Rosenquist’s 86ft-long, 23-panel F-111, can be seen fully wrapping a room; and wonderful in this anxious age to be reconnected with the sheer joy of Jellybean furniture, Look magazine’s solarised posters of the Beatles and Joshua White’s Liquid Loops.

There are lapses: MoMA’s disproportionately weak-to-non-existent black material is an embarrassment: the decade’s early years proffer a single photograph, Look At Me by Malick Sidibé, (from Mali, NB, and that a donation); and only one work – albeit a powerful painting by Daniel LaRue Johnson – documents the convulsive decade’s opening Negro struggle, collected in strength by the Whitney, that MoMa is now racing to catch up with. And, speaking to another development the Whitney caught much earlier, excepting a couple of videos, three pieces wired for sound and Nam June Paik’s black TV, the era’s burgeoning preoccupation with technology is remaindered to the exit with works celebrating the space programme. The third problem is inherent in the timeline constriction; with abstract expressionism so actively featured here, MoMA would surely have included at least one of its many Jackson Pollocks (fortuitously represented on the second floor during June), but that the artist’s premature death preceded the show’s opening date by four years.

There are curiosities: good to discover that John Baldessari launched the word paintings that so much later annointed Richard Prince and, still later, Christopher Wool. Splendid to come across Serra’s hand-drawn list of “actions” illustrating his famed dictum that “drawing is a verb”, as well as a scheme for Yale University by the disruptive architect Paul Rudolph, although the architectural department must have passed on his free-wheeling projects because it reveals nothing of such of his tsunami inversions as the legendary room that invited you to sit, read and eat on furniture overlaid with shag carpeting.

There are welcome strengths. The Colour Field moment is represented by a monumental folded canvas by Sam Gilliam. Vitrines, generally deadening, are restricted to fragile material. Given how few women broke through the era-barrier, they make a strong showing here. The usual-suspect Americans – Louise Nevelson, Louise Bourgeois, Agnes Martin, Marisol and Betye Saar (conveniently doubling as a black artist) – are shown here at the top of their game, and recently acquired work by Sonia Švecová (Czechia) and Nalini Malani (India) effectively widens the scope. I did marvel at the omission of the now revered Lee Krasner, and wondered, too, given that Bridget Riley had put her name to the field, why the vibrant op art movement is represented instead by Julian Stanczak.

Such manipulations, of course, are very much to the point, and the surprises are instructive. Easy to forget that it was in the 60s that staircases first climbed to nowhere; that posters blown up to avatars took on the mantle of art; that subversions as diverse as the optics of Jo Baer and the combines of Joseph Beuys coincided; that Latin American artists from three nations had nailed disruption by mid-century; that the satirist Robert Crumb was already his fully irreverent self, and that Henri Cartier-Bresson’s street photography, consigned in memory to an earlier time, was even more actively influential at the decade’s closing. Even lacunae instruct. How is it that the late and iconic Ellsworth Kelly, whose canvases towered over seven decades, is represented here by a single, small drawing? Perhaps to flag an artist too preoccupied by timeless concerns to not have specially influenced or been influenced by any one era? (Fans needn’t worry, as Kelly gets the last word, anchoring the Agnes Gund lobby with a tri-color triple whammy.)

It is mission accomplished. Unlike the fashion runway’s tired recycling, MoMA’s fresh look at a decade thought parsed to exhaustion has opened a new conversation. Most happily for the repeat visitor, in order to stay as loose as that moment works from the collection will be switched and rotated intermittently to the end of the exhibition’s 12-month run. 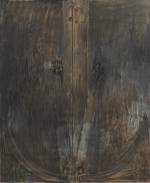 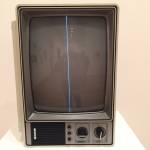 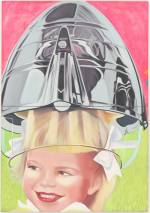