Two new exhibitions of new work by Frank Stella recently opened in London and New York. The Bernard Jacobson Gallery showed works named after, and inspired by, key archaeological sites in ancient Anatolia, the seat of neolithic civilisation from 7000-6000 BC while the Kasmin Gallery exhibited the 'Bamboo Series'. Both sets of new work are energetic metal wall constructions. They stand as tall as 12 feet high and are made of industrial materials. Stella, in fact, describes these sculptures as paintings. In his own words, 'A sculpture is just a painting cut out and stood up somewhere'.1 These works are wiry and tangled and, although the materials used are not costly traditional ones, they were still very expensive to fabricate.

Although the exhibition at Bernard Jacobson's Gallery was small in terms of the number of works on show, it was an arresting experience. At 66 years of age, Stella continues to create innovative and exciting work. One of the greatest artists of his generation, Frank Stella is the only living American artist, other than Jasper Johns, to have been the subject of two retrospectives at the Museum of Modern Art in New York. He was only 34 when the first was held in 1970, but the exhibition showed the brilliant and accomplished young career. The second retrospective in 1987 showed Stella's dramatic departure from the revolutionary abstract painting that had established his reputation, to the wall reliefs and 'aggressively baroque constructions' made in the 1970s and 1980s. Then, through the 1990s, Stella explored, among other fields of thought, the American myth of Moby Dick in a series of 'fully volumetric' reliefs.2 The recent exhibitions are a continuation of these various preoccupations. However, where 'Stella claimed that his work was devoid of references to the outside world … his new sculptures seem admirably entwined with lived experience'.3

In the 1990s, Stella worked on completely 3D sculpture and architecture. He also returned to painting on canvas in a big way; some works were up to 40 feet long and 12 feet high. Dramatic, colourful, at once chaotic and controlled, these brilliant works are profoundly moving and technically accomplished. Public sculptures during this period were also massive. Architectural in scale, Stella used a great variety of media and techniques for their construction. He was concerned with putting 'art back into architecture itself'.

In 'Stella's Dilemma', the introduction to Frank Stella at Two Thousand: Changing the Rules, Bonnie Clearwater writes about the paintings, sculptures and architectural projects of the 1990s.

Frank Stella is a giant in American art and while it was an unexpected treat to see his new work on show in the Jacobson gallery, it prompted one to imagine a full scale retrospective at Tate Modern where the vast sculptures could be seen in the Turbine Hall and the superb 40 foot paintings could transform the gallery spaces above.

Frank Stella is not only an artist whose innovative and productive career seems still to hold much in store; his articulate and original writings form an important archive for the study of art in the 20th century. He has a broad and educated knowledge of art history and a wide range of interests which include Hiberno-Saxon illuminated manuscripts, abstract Expressionism, the writings of Denis Diderot, and the impact of Chaos theory on contemporary art.6 He is also an extremely amusing commentator. A brilliant and articulate artist, Stella's account of his visit to the famous prehistoric caves at Lascaux in 1999, conveys the understanding and fascination he has with history and with the artistic process.

The works on show at the Bernard Jacobson Gallery are named after specific archaeological sites but are not representations of place. The techniques and materials used, such as sand casting and found objects, are suggestive of the archaeological process. The resultant wall sculptures are made from rusted metal and polished aluminium. They are mounted on a ring, which allows them to be rotated and displayed at any angle. Stella works on different scales, both in painting and sculpture, with consummate ease. Recently he produced a nine metre sculpture, commissioned by the National Gallery of Art in Washington. In January 2002, it was installed outside the Gallery's East Wing and hailed by the Director as, 'one of the great sculptures of our age'. He has also been working on a number of architectural projects including a museum in Germany. Although they are yet to be built, these designs show Stella at ease in a range of challenging and ground breaking art forms. Tate Modern, please!

Stella recently said, 'I want to make exalted art. A successful image has pictorial lift. I am looking for whatever is up there'. Stella has abandoned Minimalist art in favour of an art that engages with many aspects of life. In his recent work, there are very many allusions made in terms of the process of art, references to myth, history, personal experience and the points at which individuals are touched by another realm of existence altogether. 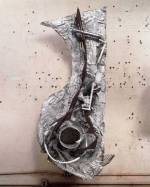 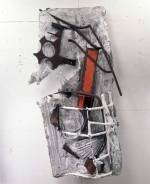 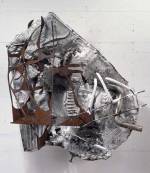