The raw power of the works in this show, in which we see Bacon’s fascination with animals and with the animalistic side of humankind, will stay with you long after you leave 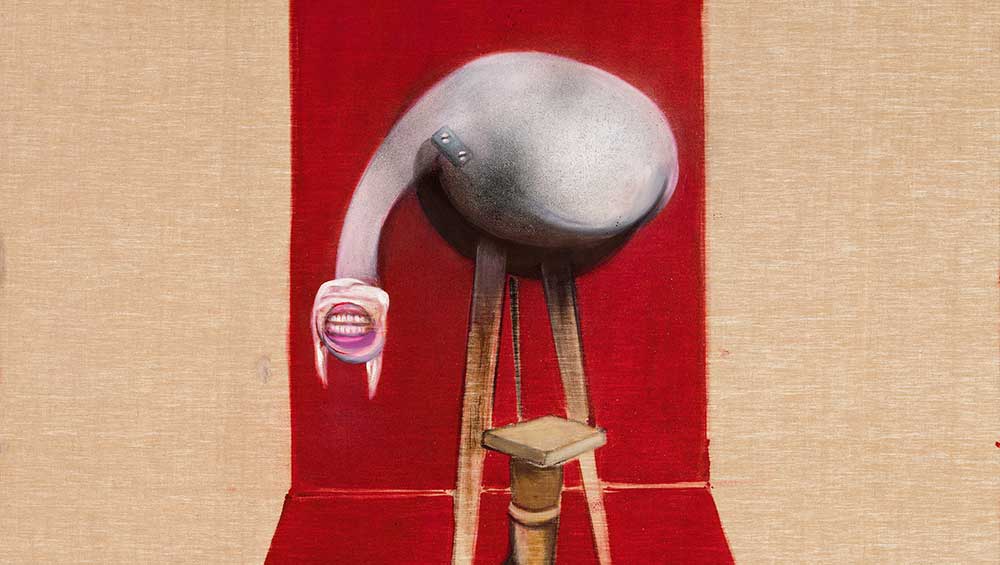 The huge canvases that make up this exhibition are filled with breath and muscle. Animal and human bodies twist and writhe in pain, or ecstasy, and the air is thick with the energy they create. Some of Francis Bacon’s figures crouch, as if in hiding, or making ready to pounce. Others cower as if in shame, while yet more twist and even howl. All of the figures in Bacon’s powerful paintings in this exhibition reveal his fascination with animals and what they might tell us about our own instinctual nature. There are no holds barred, and he confronts the viewer with raw, challenging images. 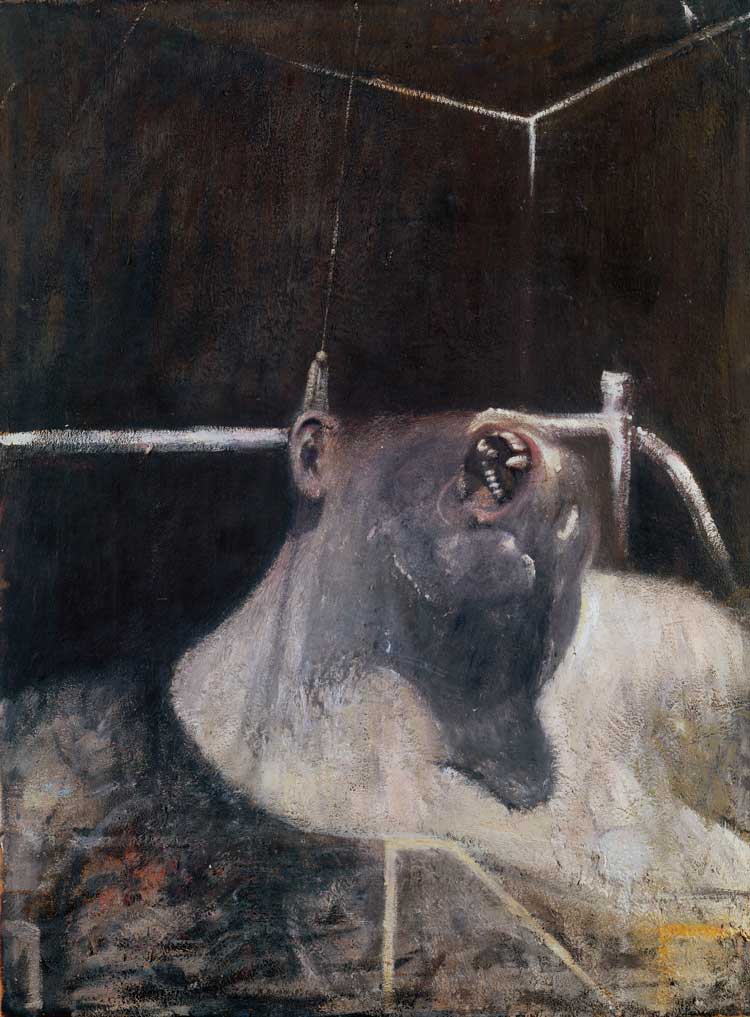 The exhibition’s argument is that Bacon’s encounters with animals throughout his life deeply affected how he understood and portrayed humanity, with all its failings. Whether it was his early childhood years growing up on a stud farm in Ireland, or watching big game on trips to Africa, the cry of nature captured his imagination. Africa was especially important to him in the 1950s and he travelled there on several occasions, enthralled by the wildlife. As well as direct observation of the uninhibited behaviour of animals, Bacon also gathered a large collection of photographs of animals from different sources. For instance, in 1963, the photographer Jorge Lewinski gave him photographs of bullfights, while Bacon’s friendship with the writer and artist Peter Beard – Beard published a book on African wildlife in 1965 – led him to collect hundreds of Beard’s photographs. So how does all this play out in Bacon’s painting? 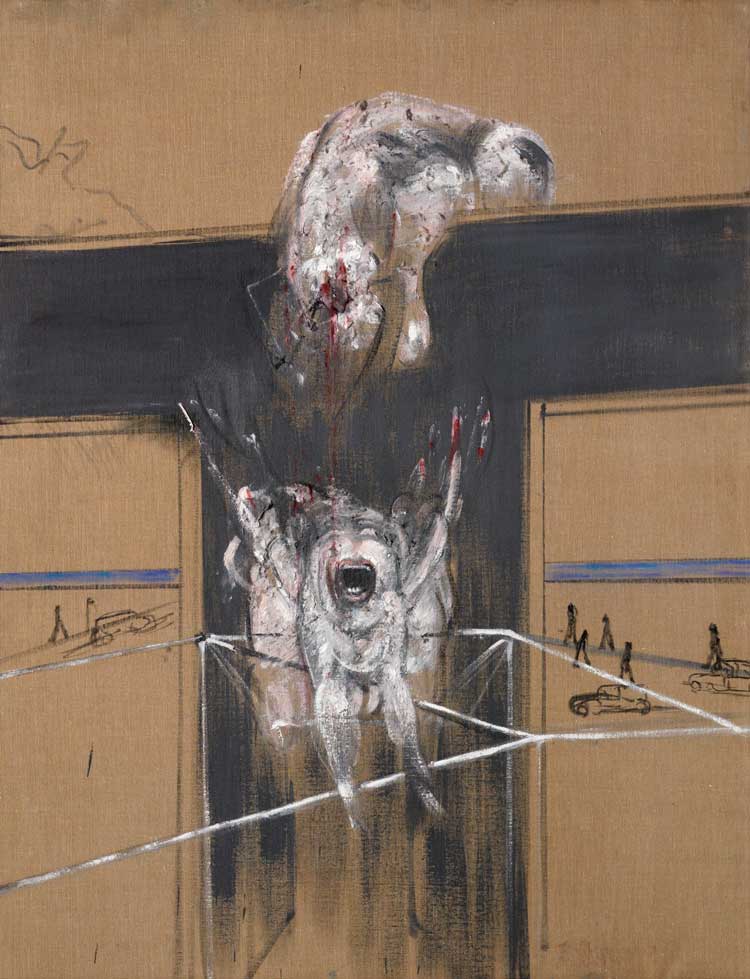 Alongside the atrocities of war in the first half of the 20th century, and the human capacity to inflict acts of unspeakable horror and violence, Bacon said of humankind: “We are meat, we are all potential carcasses.” The flesh, skin and bone of the human body became the material for his paintings and he sought to portray the animalistic nature of humankind. Of his painting Crucifixion (1933), Bacon said it was “just an act of man’s behaviour”. Further, in his hybrid, biomorphic forms of the mid-40s human figures are distorted almost beyond recognition. These are images of humanity pushed to its physical and psychological limits. 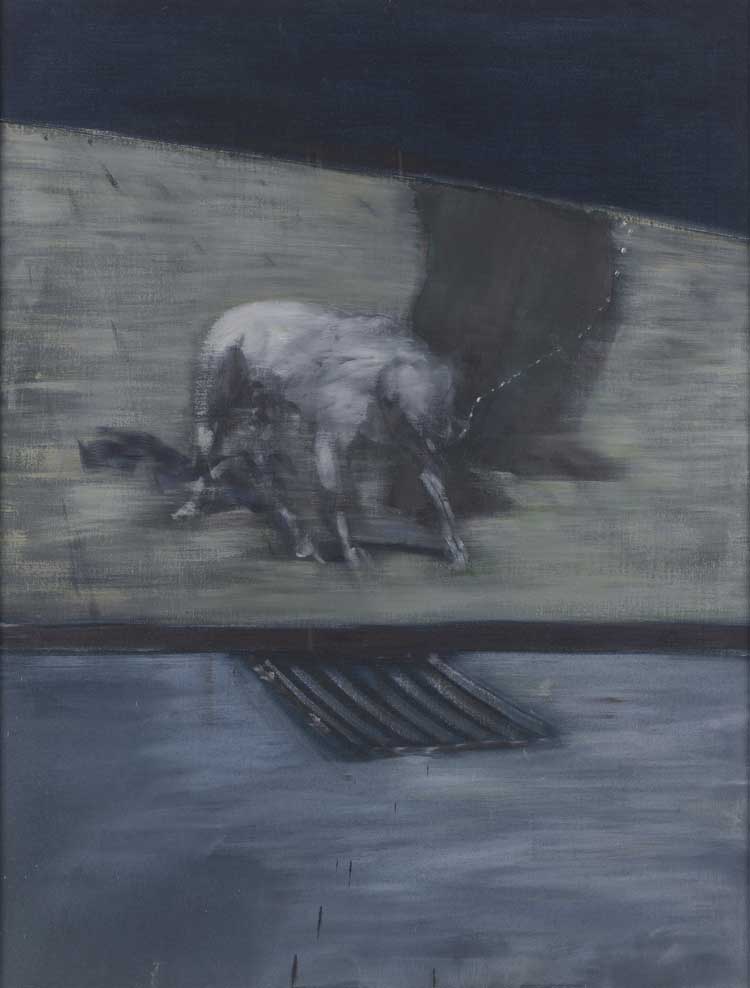 The 1950s saw Bacon paint dogs, owls and chimpanzees. In Head IV (Man with a Monkey) of 1949, he merged man and monkey in a manner that hints at the suited man’s animalistic nature and the monkey’s almost human qualities. In Chimpanzee (1955), Bacon deployed his cage motif, and a frenetic chimpanzee swings its limbs around violently. During trips to southern Africa, Bacon was fascinated by the sight of wild animals moving through the grasslands – crouching, crawling, chasing, pouncing. This fascination was transposed into depictions of naked human figures in similar poses, frequently with powerful sexual undercurrents, as in Two Figures in the Grass (1954) or Figures in a Landscape (1956-57). An animal’s instinct for survival captivated him and he brought this idea together with the theme of the crucifixion in Fragment of a Crucifixion (1950), a horrific image of pain and anguish. He painted dogs more than any other animal – Dog (1952), for instance – and these paintings often took Eadweard Muybridge’s photographs of a mastiff as their starting point. 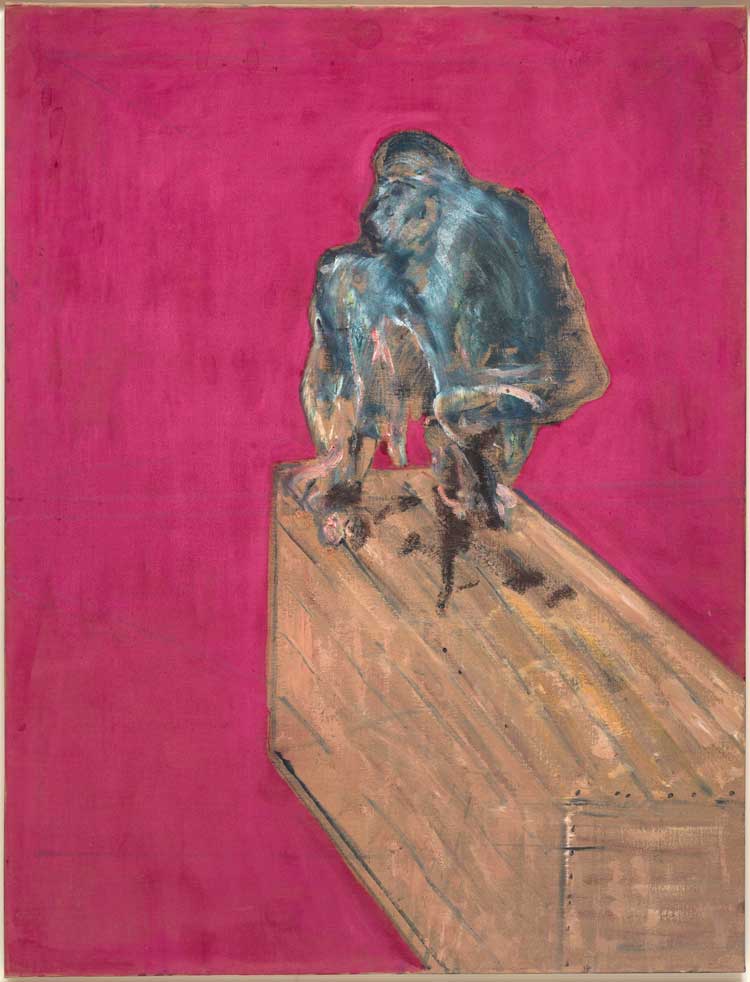 It was the animal within us that truly fascinated Bacon as a subject for his painting and that is what he aimed to capture in his portraits. He was not interested in conveying a likeness. Instead, Bacon’s exploration of the human form sought to get to the heart of humankind’s animalistic core. Scratching beneath the surface of civilisation, he aimed to release his sitter’s primal scream. In Head VI (1949), an early example of his famous rendition of Velázquez’s Portrait of Pope Innocent X, the howling figure of the pope appears as a terrified, caged animal, inviting pity. Almost 20 years later, in his Portrait of Isabel Rawsthorne (1966), Bacon’s friend Rawsthorne seems to emerge from his distinctive brush strokes in “a moment of magic”. 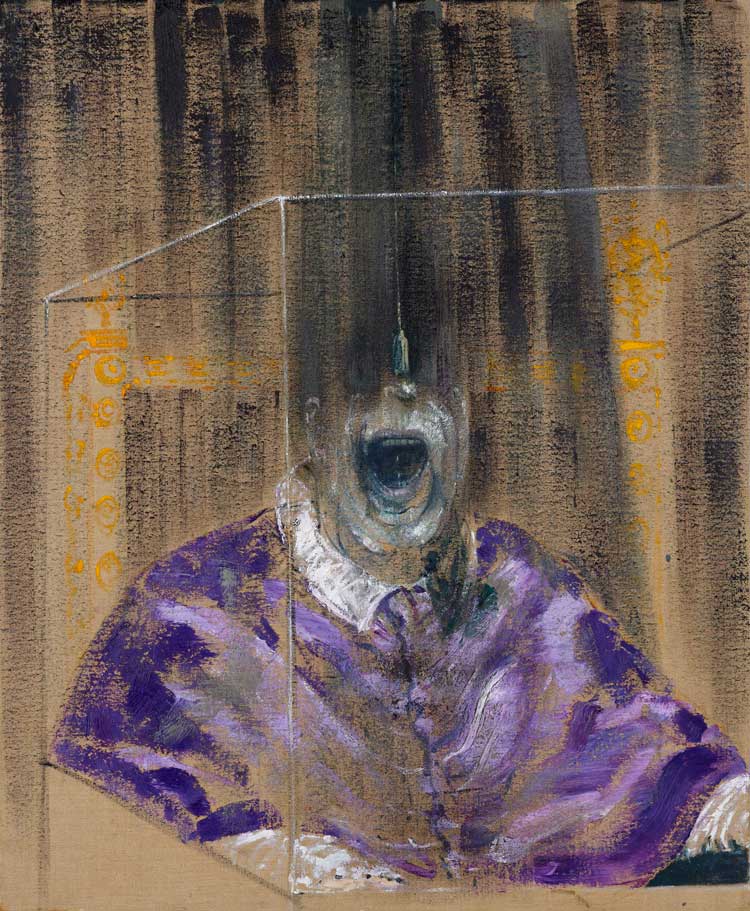 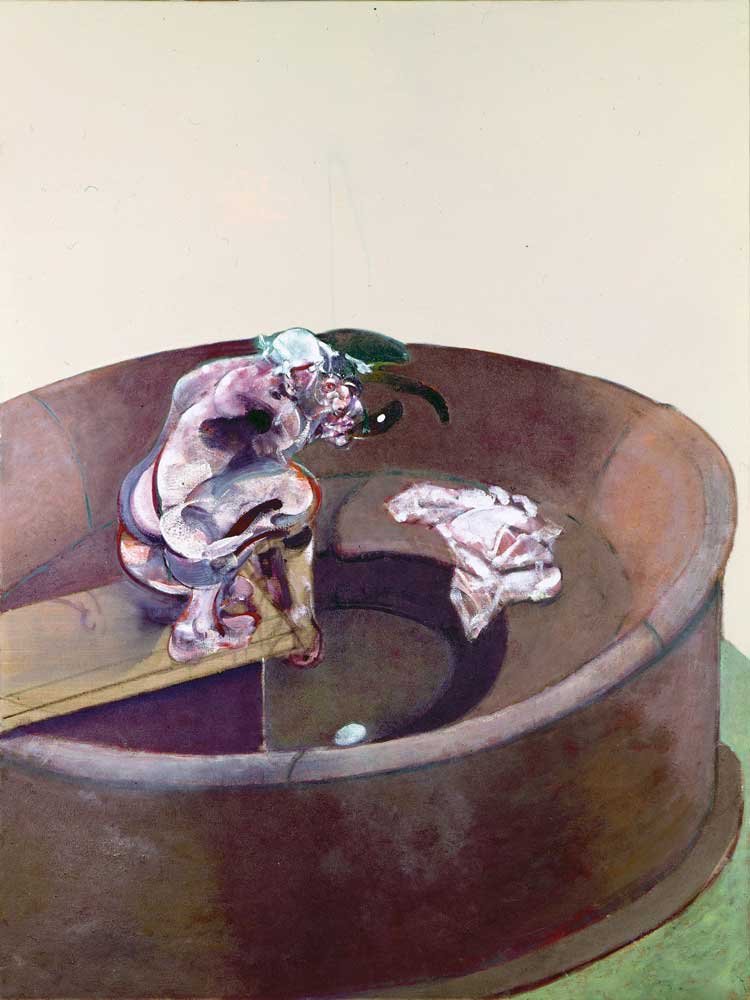 Bacon’s friends and lovers provided models for his depictions of the naked human body. His turbulent relationship with George Dyer was no exception and he often commissioned photographs of Dyer that then formed the basis of his painting experiments. Another friend, Henrietta Moraes, was also a frequent sitter. Crouching, or stretched out, Dyer, Moraes and others provided the starting point for Bacon’s frenzied painting of flesh in movement. 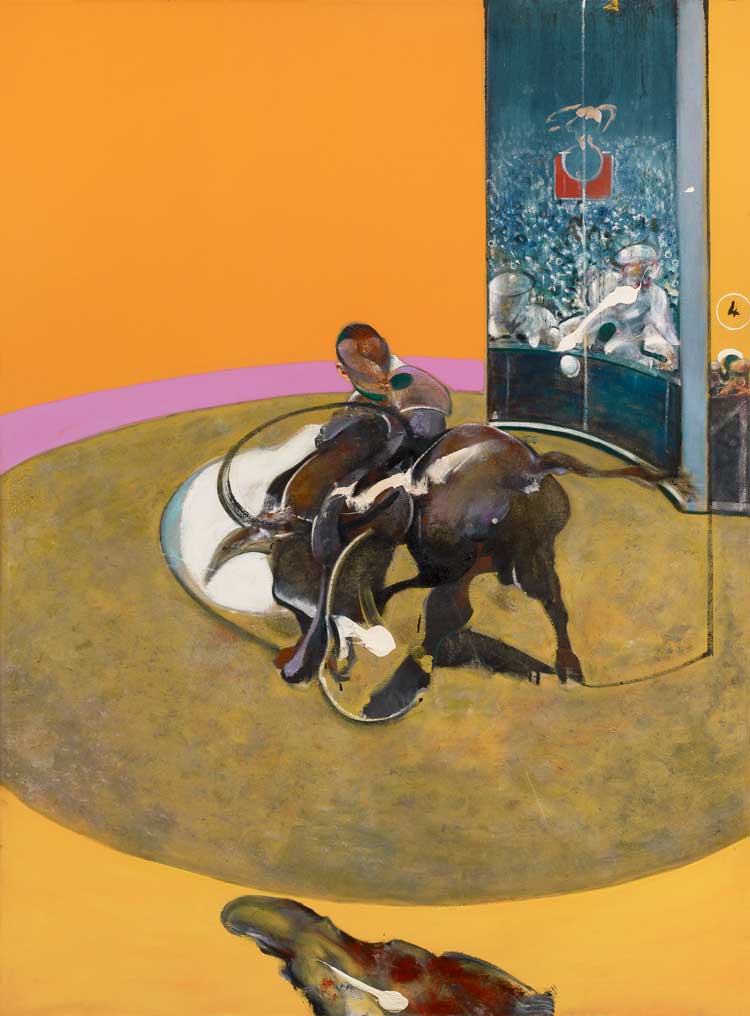 Thee versions of Bacon’s famous bullfighting paintings hang together in this exhibition in the gallery’s central hall. Bacon said: “Bullfighting is like boxing – a marvellous aperitif to sex.” Still, it was the violence rather than the eroticism of these paintings that especially struck me. The circular movements of bull, matador and cape echo the bullring in which they are set and the gallery in which the paintings are hung.

A gallery space filled with largescale triptychs is a triumph. There is no escaping the powerful images in this space and everywhere you turn swirls of paint, flesh and raw energy suck you in and spit you out. These large-scale triptychs became important for Bacon from the 60s, when he deployed the form to manage complex compositions without using narrative. Dyer is often the subject, as is the case in Three Figures in a Room (1964) and Triptych August 1972 (1972). The darkness of the latter work makes sense when we learn that had Dyer died of an overdose the previous year.

The exhibition closes with Bacon’s Triptych (1987) and Study of a Bull (1991). These works blur man and beast. In the triptych, the exciting spectacle of the bullfight is over and the only the wounded flesh of the matador and bloodied horns of the bull remain. In Study of a Bull, Bacon’s final painting, his use of dust as a medium creates an image where the figure of the previously powerful bull, seems to fade and disappear. What never fades is the power with which Bacon portrayed his subjects. Whether, animal or human, or somewhere strangely in between, the subjects of this exhibition will remain with you and might just have you looking for the beast within. 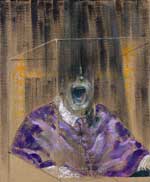 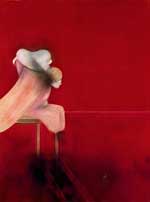 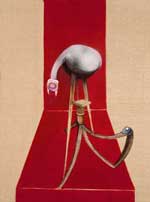 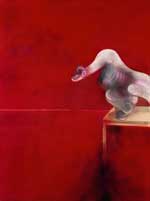