This exhibition tells the story of the irrepressible spirit of a true artistic visionary who has been largely forgotten by art history. Tate Modern hopes to bring Fahrelnissa Zeid’s name to the lips of contemporary art-goers once more 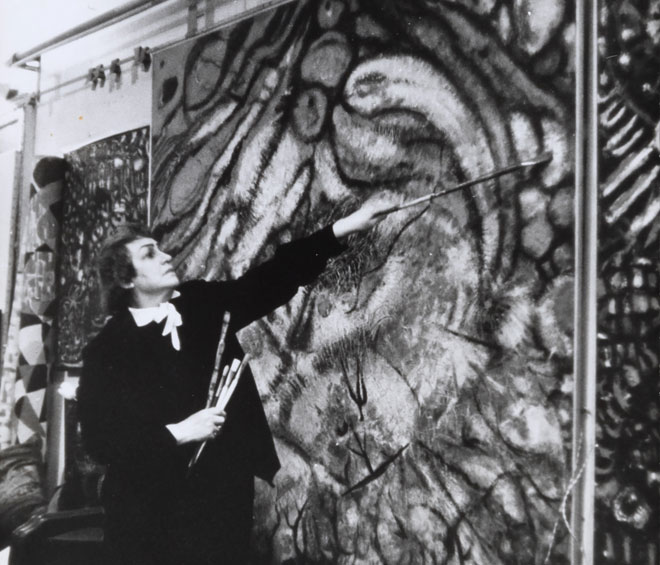 While suffering from a paralysing bout of depression (something she battled throughout her life), Fahrelnissa Zeid (1901-91) lay in her bed staring at the wall. A fly caught her attention as it zipped this way and that, and it was the sight of this unassuming insect and the winding paths it took that inspired her to pick up her brush again and paint one of her most striking abstracts. For Zeid, painting was a way to heal, to make sense of the dramas in her life, and the process completely absorbed her attention: “While painting,” she said, “I find myself integrated to all living things … then I loose myself and become part of a superhuman creative process.”

Zeid’s was a life with more drama than most: she not only lived through, but also found herself in the middle of, some of the most pivotal events of the 20th century. In 1935, as the wife of Prince Zeid al-Hussein, the Iraqi ambassador to Germany (he was her second husband), she was invited to tea with Hitler. The two apparently chatted about painting. She was close to Mustafa Kemal Atatürk, the first president of Turkey, and when her husband was posted to London she entertained the Queen Mother. Zeid took her diplomatic duties seriously and threw lavish parties in the Iraqi embassy in London. She loved to be at the centre of things. But her life was peppered with personal tragedy. Her brother was sentenced to 15 years in prison for the murder of their father, she lost her first child to scarlet fever, and, in 1958, her second husband’s family were assassinated. She and Prince Zeid Al Hussein only survived because they were holidaying on the Italian island of Ischia.

Zeid’s life is so eventful that it is easy to overlook the true originality and variety of her artistic career. And despite being a hugely successful and well-received artist in her time, she has been dropped from the popular annals of art history, perhaps because she was a woman, perhaps because she spent her latter years living in Jordan, away from the European spotlight.

Although this is a relatively modest exhibition in terms of scale, it presents a cross-section of her dramatically changing style, her constant search for new forms of expression. Zeid’s earliest known painting, a detailed portrait of her grandmother made when the artist was only 14, is a touchingly observed study. Then we are guided through the paintings of her early career, scenes of Budapest and Istanbul (where she was born), where her interest in colour, pattern and flat planes mix European influences with that of Islamic art, with the tessellated tiles, stained-glass windows and rich embroideries of Turkey. Paul Cézanne and Henri Matisse haunt these early works, too. You can see their influence in the brightly coloured dancers, the skaters on an ice rink, the white chickens scattered like magnolia petals beneath an electric blue tree. Zeid was like the city of her birth, an amalgam of east and west.

She tackles sorrow, too. Huge grey canvases painted during the second world war explore violence, destruction and death. But then there is a change in Zeid’s work. After a move to London in 1946, figuration began to drop away. Fight Against Abstraction (1947) marks this seemingly tense transition. A grey hand, half clenched, seems to throw a weak jab at the almost stifling array of intricate shapes. Other figurative elements are overwhelmed, sinking into the abstract quagmire behind. Faces have surrendered to geometric forms; other limb-like shapes are striped and distorted.

A year later, Zeid painted Resolved Problems. Figuration drops away entirely. This is a joyously coloured canvas of gestural shapes that seem to jostle in front of your eyes. Red is the dominant colour, a hot, vivid hue that holds together the greens, blues, yellows, whites and purples. These vast canvases of interlocking shapes are seductive displays of energy and movement. There is even depth in these abstracts, areas of smaller pattern that suck you in. Zeid wanted to be surrounded by these works, to be immersed in them, and she pinned her largest canvases to the walls and even rolled them out for people to walk on.

After the coup d’etat that resulted in the assassination of the Iraqi royal family, her life would never be the same again, and for two years Zeid stopped painting. Forced out of the embassy in London and into comfortable, but less salubrious surroundings than she was used to, at 57 Zeid cooked her first meal. But when stripping the carcass of a turkey, she was inspired by its skeleton: “I was cleaning the turkey after our Christmas dinner when I suddenly felt the essence of the bird in its bones.” She took the breastbone and painted sinuous black lines over its surface, and with that simple act a new creature was born, some strange and ancient fish that would not look out of place on a Mexican market stall on  the Day of the Dead. More followed, bones frozen in resin like creatures caught in amber, numerous poultry shards that form abstract compositions. Zeid’s desire to create art was irrepressible and the most surprising things could trigger her to go in a new direction. She started making portraits again, too – large cartoony-eyed paintings of family and friends that again explore the complex relationship between east and west. But this exhibition is about more than that, more than cultural amalgamations. It is about something universal and timeless. It is about the need to make art. 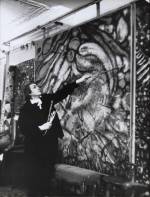 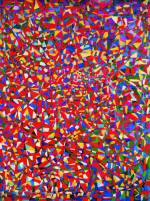 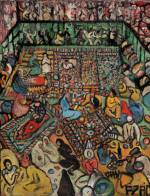