This is a small but moving display that, 75 years after the Holocaust, reminds us of the need for courageous art 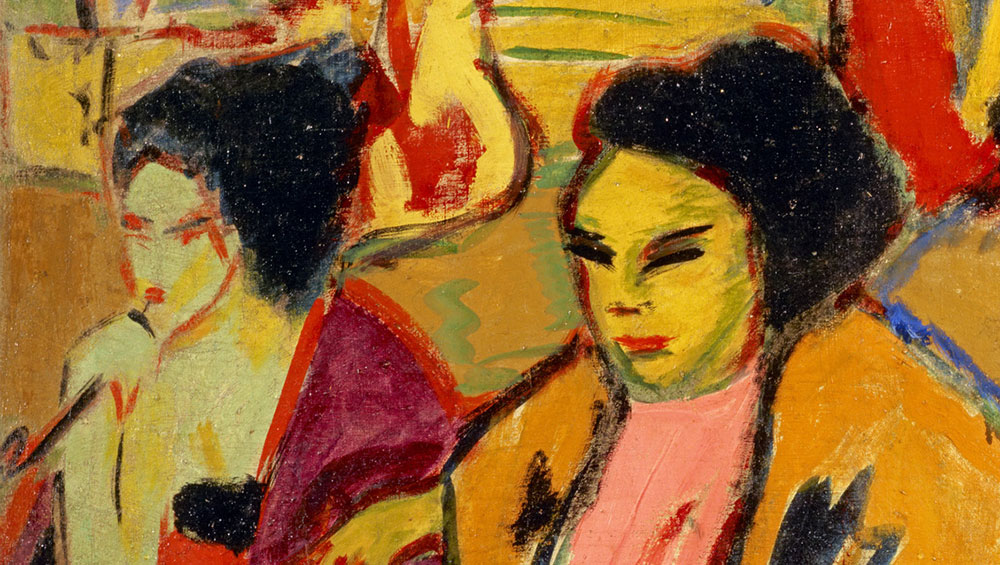 Scottish National Gallery of Modern Art (One), Edinburgh
Until 28 February 2020

From moving paintings inspired by Russian iconography and Jewish persecution to experimental, vibrant visions of the French countryside, this slight but carefully curated selection of expressive art at the Scottish National Gallery of Modern Art is a welcome reminder of the subversive potential of representations and explorations of emotional life in a world that so often erases some mental lives over others. It is also a chance to see the expressionist style as it emerged all over Europe in the early 20th century, rather than focusing entirely on German or Austrian art. Bringing in work from French fauvism, the Scottish colourists and Russian painters, as well as striking work by the German and Austrian expressionists, it shows how these disparate artists used emotion and visceral expression to resist the cruelty and inhumanity of their times. 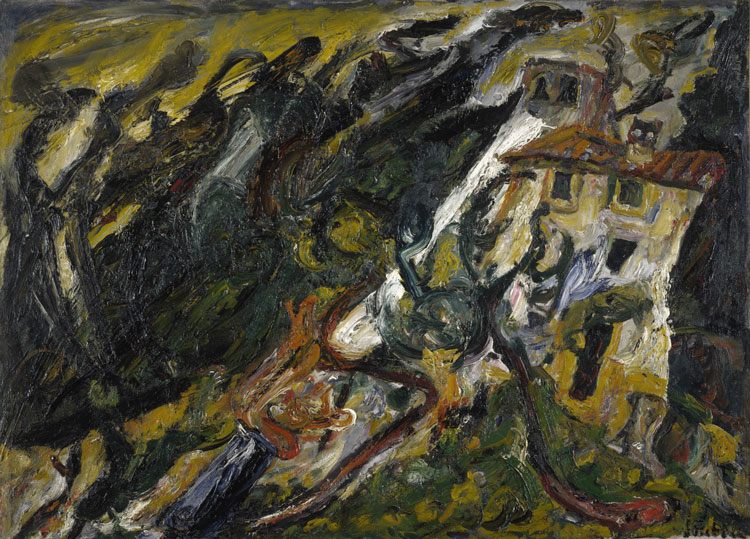 Taken from the gallery’s magnificent permanent collection, certain pieces not only stand out, but also manage to cast light on complex modern situations and lives. Natalia Goncharova’s Rabbi with Cat (c1912), in particular, strikingly expresses the trepidation and sadness of this figure, as he flees a massacre of Jews. This beautiful painting, showing the rabbi holding his pet cat as the Madonna typically holds an infant Jesus, expresses a deep and anguished sorrow for the victims of fascism and antisemitism in a way that is immediately recognisable and, unfortunately, still very relevant. Indebted to the Russian iconography that Goncharova would have grown up around, the elevation of the Rabbi and his cat to transcendent, spiritual figures (particularly through the inclusion of the hand of God, seen in the top-left corner, blessing the Rabbi) implies a sense of hope and goodness in spite of the hellishness of the lived reality of this figure and those he represents. 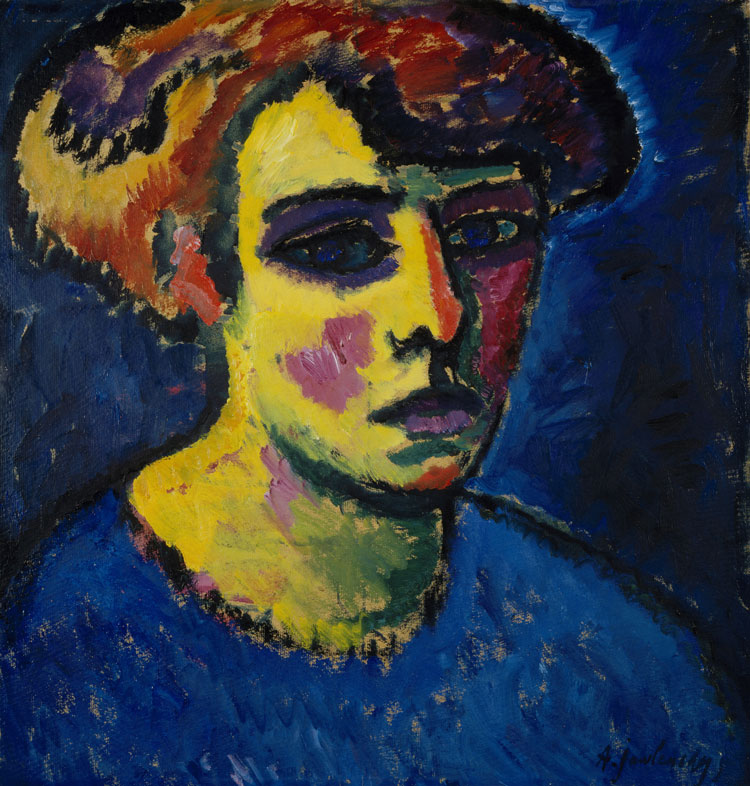 In Frauenkopf (Head of a Woman) (1911), Alexej von Jawlensky also continues in the tradition of Russian icon painting and, in the early expressionist tendency to adapt this tradition to the secular, paints an unnamed woman as if she were a saint. In Mikhail Larionov’s Soldier in a Wood (c1911), there is strong evidence of the influence of “primitive” Russian sources, such as folk art, sign-paintings and children’s art and toys, creating a sense of foreboding and anxiety in the ominous fairytale forest in the background and the disarming, puppet-like soldier.

French painter André Derain creates a more joyful scene in his vibrant landscape Collioure (1905), which depicts the small fishing village on the Mediterranean coast, close to the border with Spain. Derain and Henri Matisse spent the summer of 1905 in Collioure, apparently perfecting this technique of combining bright, clashing colours with rough brushwork, to break away from impressionism and an atmosphere of complacency that no longer fulfilled them. This new style would later inspire the derogatory nickname for these and similarly innovative artists as “Les Fauvres” – or the wild beasts – by a critic in Paris.

Ernst Ludwig Kirchner’s striking painting Japanisches Theater (1909) shows the interaction between the French and German expressionists. Although Kirchner was central to the expressionist movement in his native Germany, his depiction of a play here owes much to the flat, decorative style of Matisse and the vibrancy of Derain and his forebears Paul Gauguin and Vincent Van Gogh. Emil Nolde, like Kirchner, a member of the Dresden-based Die Brücke group, further reveals – in his painting Kopf (Head) (1913) – the ways in which cross-pollination of styles and cultural artefacts at this time allowed for the development and enrichment of art practice across Europe and beyond. 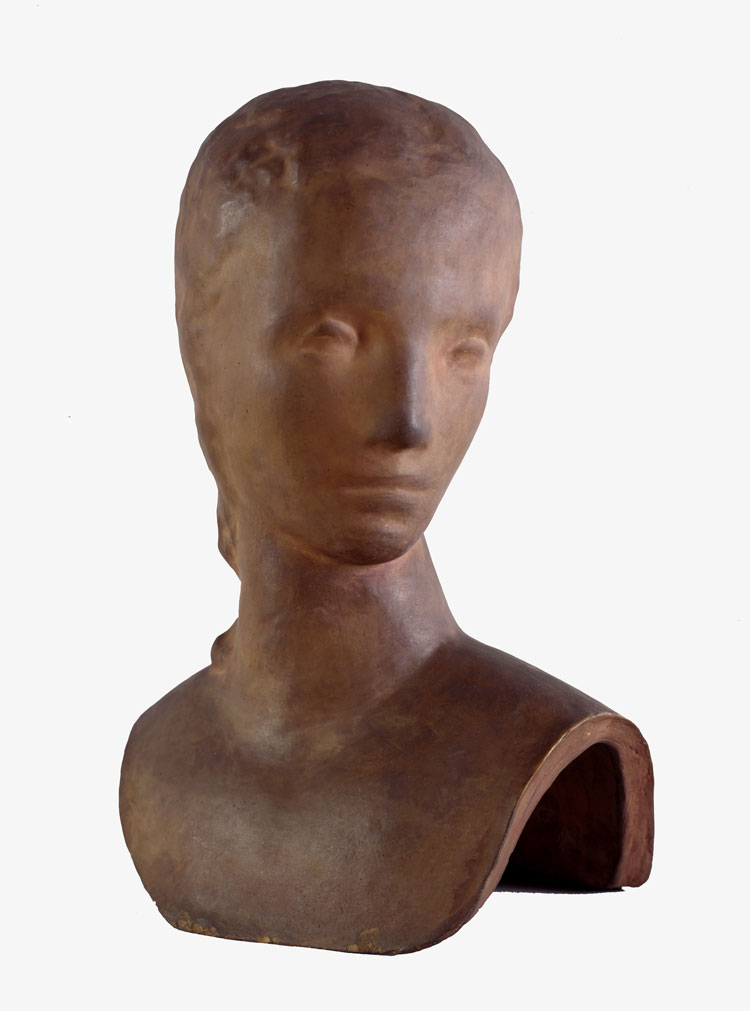 As fascism rose in the years that followed – and as the works of the expressionist artists were widely derided as “degenerate art” by the Nazis and their counterparts elsewhere – the desire to represent emotion and mood came to be thought of as in opposition to “German” values. It is bizarre to think that a movement that now seems so centrally German, so much a part of German culture, was at this time expunged (along with the artists) as treacherous. These expressionists thought of themselves as proponents of a “new objectivity”, however; in their assertion of their own subjectivity, they made personal perspectives real and meaningful, and this was precisely what scared the fascist regime. They made people – any and all people – important. They called for human experience to be expressed, represented and shared, for the spiritual in the secular to be revealed, and for the value of everyday people to be celebrated. This turned out to be radical enough to justify, to the Nazis, the exile and sometimes death of those artists.

The story of expressionist art in the early 20th century is the story of a resistance against fascism, from before it even had a face, a party or a name. Fascism would also bring the movement to a swift end. In one haunting work, Ernst Barlach’s Das Schlimme Jahr 1937 (The Terrible Year 1937), a maudlin figure is carved from wood. This sculpture was carved in 1936, but given its allegorical title the following year in response to Hitler’s Degenerate Art exhibition, in which Barlach was included. By the summer of 1937, almost 400 of Barlach’s works had been confiscated from German museums, as part of Hitler’s shutdown of the avant garde. Here, Barlach’s figure mourns what has already happened, and what is happening, as Germany and Austria’s Jewish people, its leftwing community, its Gypsies, its avant garde and its gay people, were crushed and exiled.

Expressionism shows the way in which European artists shared and enriched one another, and resisted the widespread dehumanisation that would ultimately be their own demise. They elevated everyday emotional lives, the passion and integrity with which they and their friends and acquaintances lived. They are a testament to who and what was lost, but also what remains, years later, in this spirit and those who continue to fight for it. Seventy-five years after the Holocaust, this is a moving and beautiful display that reminds us of the continued need for subversive and courageous art, art that is empathetic and communal, in the face of new threats.