The exhibition takes its name from one of its key works, The Giant Cliff (2010), and truth to tell it is a good choice as an all encompassing title as there is an underlying edginess to all of Enrique Martinez Celaya’s art. His work has an almost (but not quite) unhinged quality, as though viewers could be pushed over into a place of chaos and despair – but are somehow held back by poetry. These are such literary works that it is no surprise to find that this artist is also a poet, and that his poems likewise address the great metaphysical questions about the meaning and purpose of life.

The Giant Cliff is one of the best recent examples of painterly angst. It is a large painting of a bleak rocky foreshore, with lusciously painted grey blue skies. The solitary figure of a small boy holding a lamp provides both scale and contrast to the bleak rocky shore. The composition would be unremarkable if it were not for the execution – the way the paint is worked across the canvas, and the contrast between this almost alienating northern landscape and the scrawny figure of the child. There are unspoken echoes in this work of lamps that guide, of lights that shine in darkness. It is also a painting that places its author very much in the culture of the muted tonality and dark myths of northern Europe. Yet Enrique Martinez Celaya is from Cuba, a part of the diaspora that followed the ascension of Castro. He thinks very much within the sensibility of Latin American visual and literary sensibility, but at the same time can claim intimate knowledge of the visual traditions of the American north.

This rich cultural mix, which is one of the reasons why Celaya’s art is so intriguing, is the result of both circumstance and interest. He came to painting via an academic studio in Puerto Rico, after spending much of his childhood in Spain. But then painting was put to one side while he studied quantum electronics, and when he turned again to art, he was in the United States. He was surrounded by some of the greatest of all public collections, and in Maine was living in a geographic space more harshly divided by changing seasons than either the Cuba of his early childhood, or Florida, which is now his home. That alone would be enough to encourage considerations of the meaning of life.

Some of the lessons of 19th century academic traditions seem to still inform his art. These works show an awareness of the literary content of a work, without being heavy-handed about it. There is also a confident use of muted tones, with little need to create more than one piece of visual contrast in a painting. Bartolomé Mayol, his Puerto Rican master would be proud of him. The Pale (2009–10), with its tough division of dark trees in the foreground, is a work that would make any academic master proud. Likewise the beautiful watercolour, The Road (2010), owes much to salon schools of the past. He may have learned well from this tradition, but Celaya is well able to surpass it. The Freedom (2010) is a disturbingly beautiful landscape, with the sky painted in confident and emotive reds and dull blues.  It is a vista of endless land, without constraint.

This celebration of freedom links to another impact of his varied multicultural history. Too many of Enrique Martinez Celaya’s works show bleak little figures, usually a boy, sometimes burdened with either an unstated load or pulling another dependent child. The artist is an exile, placed without roots in an unknown and confusing land. He is burdened by his past, as well as his present. The Lord (2011) places the sad and solitary child in what looks suspiciously like a poppy field, the brother has the same small boy pull another child (a sister?) in a trailer contained by a bubble.  Refugee children remain their brothers’ keepers. In one gently macabre work, The Last Reason (2011), a girl holds a bloodied bird to her mouth.

Ultimately Enrique Martinez Celaya presents a fairly bleak world-view. In The Way Things Are (2011) an ill-defined creature (perhaps a spider?) is in a glass jar, while outside its confines we see the night sky and an intensity of stars. The contrast between the confinement of the jar and the liberation of the night sky, all sketched in economically dark tones, is immense. The exhibition is not altogether gloom and angst. The Breaking is a large painting of small life – two bright yellow birds, next to a dandelion, prepare to share an insect. The subject is almost sweet ornithological love, but not quite.

Joanna Mendelssohn is an Associate Professor at the College of Fine Arts, University of New South Wales, Sydney. 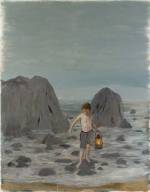 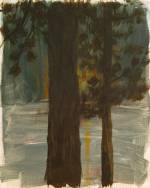 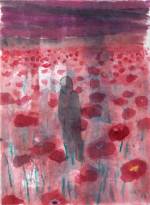 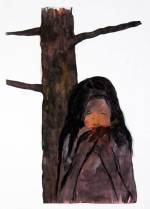 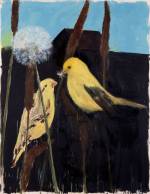