Price’s explorations of the archives of carpet manufacturers operating in Scotland from the 1830s to the 2000s bring sound, image and archive together to expose the power, gender and knowledge structures at the heart of this social history 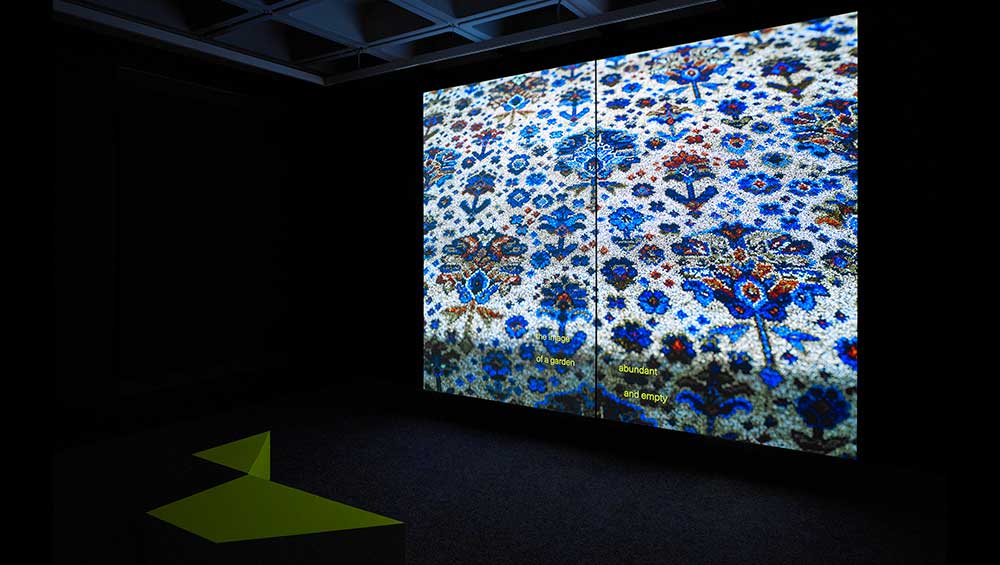 Glasgow’s carpet manufacturing heritage might be at the heart of this exhibition of new work by Elizabeth Price, but there is more to it than that. Underfoot is Price’s first solo exhibition in Scotland comprising a two-channel video projection of the same name and a textile work, Sad Carrel, the latter made by Dovecot Studios. These are shown at the Hunterian along with a small number of archival photographs and accompanied by a generous booklet of images and essays available free to visitors to the exhibition. The historian in me wanted to see more physical archival images and documents included, but perhaps that is unfair. After all, it is not about the archive, but about Price’s creative response to it. Sad Carrel is further evidence that a creative response to archive rather than archive itself is what is important here. What is also important is that this new work will become part of the permanent collection at the Hunterian, the oldest public museum in Scotland. 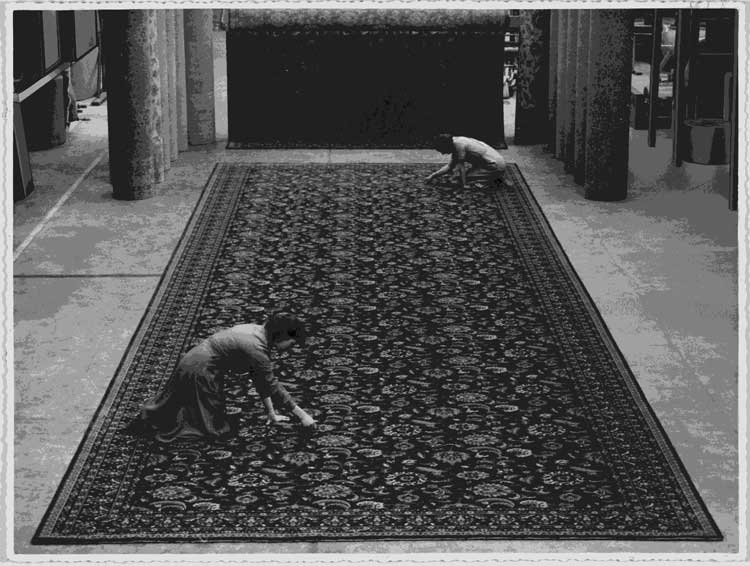 This is not, of course, the first time that Glasgow’s heritage in carpet manufacturing has fed into the arts. John Byrne’s The Slab Boys trilogy, begun in 1978, examined life in the slab room (where colours were mixed and ground) at the fictional A F Stobo Carpet Manufacturers in Paisley in the 1950s. Byrne worked at A F Stoddard and Company Ltd before and after he attended Glasgow School of Art (1958-63) and his experience there was the impetus for the plays. 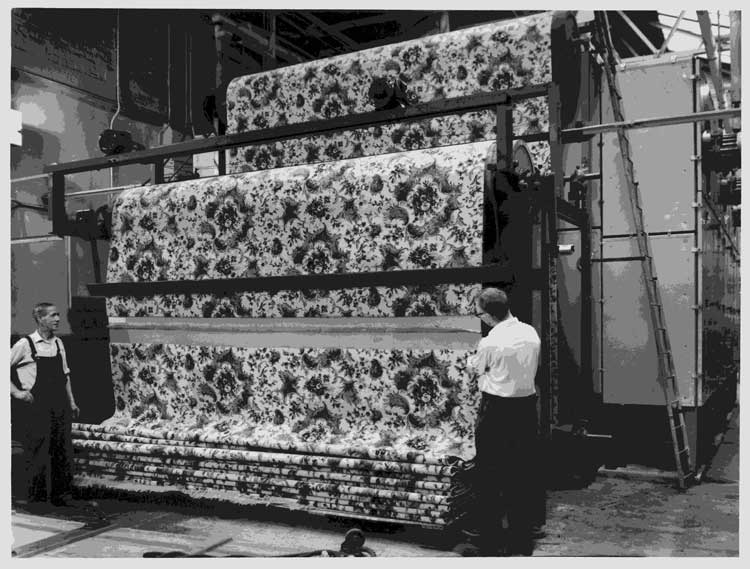 Almost 50 years later, Underfoot began from Price’s explorations of the archives of carpet manufacturers (held by the Archives and Special Collections of the University of Glasgow) that operated in Scotland between the 1830s and 2000s. James Templeton and Company Ltd, Glasgow, and A F Stoddard and Company Ltd, Elderslie, were the largest of these manufacturers and each had a workforce of several thousand people. Drawing on archival photographs and records and traces of labour such as “point paper” drawings (technical documents encoding information about the pattern), Price has composed a film that melds ghostly black-and-white archive photographs with digital imagery and an arresting soundtrack.

The connection between the Jacquard loom and digital computing is well-understood and it is more than 20 years since Sadie Plant’s 1997 book Zeros + Ones interrogated the intersection between women, feminism, machines and information technology. The Spool Axminster Carpet loom (derived from the Jacquard loom) and its manufacturing workforce sat largely at that interface. 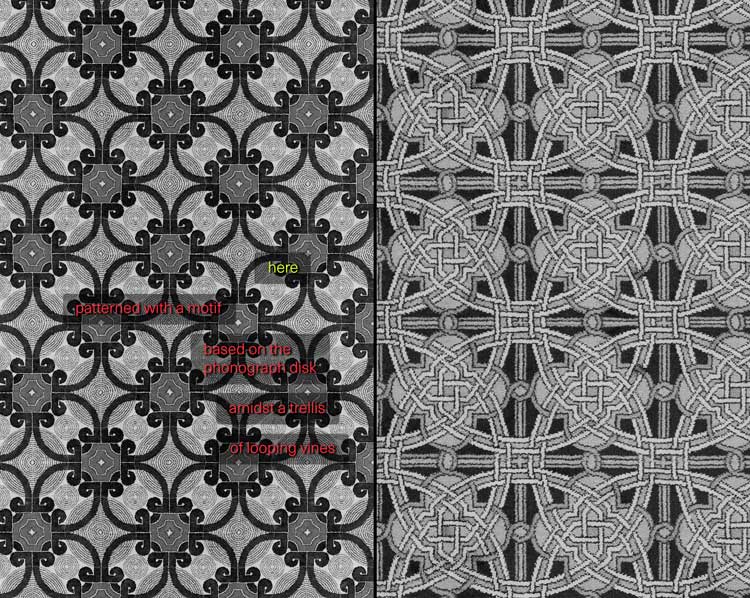 Price’s film riffs on crisscross lines and pixelated patterns in a way that evokes the warp and weft of the loom, all accompanied by a soundtrack that suggests the movement of the machine parts as it weaves and the pluck of the carpet tuft from the fabric created, while the word “PLUCK” appears repeatedly in off-kilter and staccato form, skewed across the screen. In this way, image, language and sound all align in a pleasing form. The intensity of labour still required to make these carpets is conveyed through image and information. Some workers are seen winding spools ready for manufacturing while others are seen hand-finishing and checking for flaws in the complex all-over patterns. 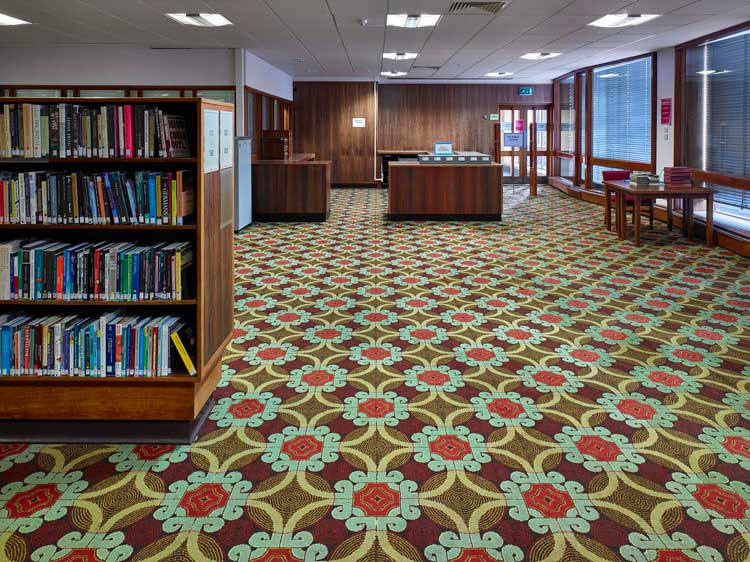 The Mitchell Library in Glasgow.

The “point papers” that Price explored act as a store of knowledge, so there are clear associations with libraries and their function as stores of knowledge. The Mitchell Library in Glasgow and the survival of its carpets then becomes a point of focus of Underfoot. When in 1967 it was proposed that the Mitchell’s Edwardian building be extended, its role as a public leisure facility was extended too, providing a concert hall, conference suite, public bar and canteen. The carpets brought the social and scholarly spaces together but, still, the library is a place of study and the sound of typewriter keys through parts of Price’s film suggest the writing down of knowledge in these spaces. The carpets help to manage the acoustics and so do the carrels – small cell-like spaces for private study. 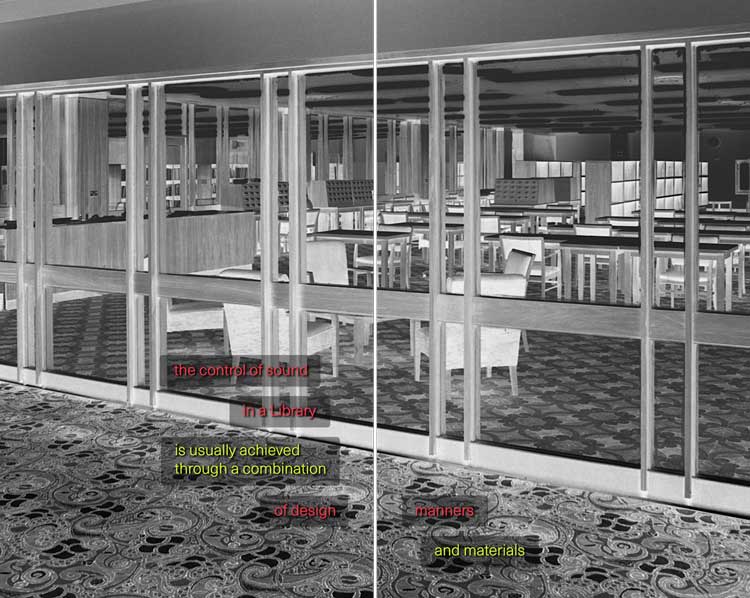 Price tells us that carrel is an old word that means an enclosure around a single desk and is related to the word carol. Both nouns, carrel and carol, derive from an older word still meaning circle. The carol is a sonic surround while the carrel controls sound. Price’s introduction of a loud acoustic guitar at this point is a perfect counterpoint to the expected hush of the library. Sound control, she explains, is a combination of design, manners and materials. So, while the carpet acts to muffle acoustics, so too does the wood veneer that panels the walls of different departments of the library. Language and Literature is lined with oak, Art is lined with walnut and the Music Department is lined with blackbean veneer. The carpet, despite its usefulness in quieting sounds, is patterned with a phonographic design in the Music department, as well as a trellis of vines and other busy patterns elsewhere. Still, it is functional and we cannot help but imagine the hundreds of feet walking across it every day. 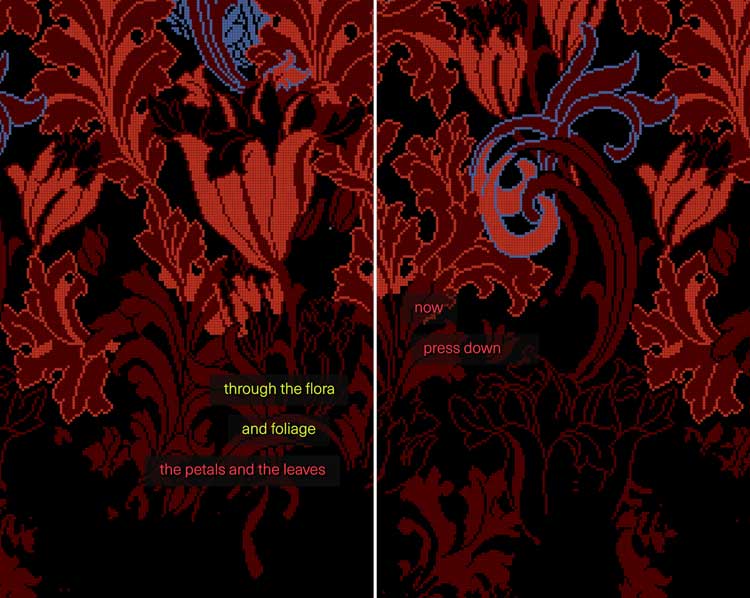 All the carpet designs shown in Price’s film, in whatever form, are abundant, floral and reminiscent of a garden. There are trefoils and other floral motifs and their names flash up on the screen – wreaths, garlands, sprigs, lotus blossom, acanthas, bell heather, clover, pinecones, peonies. The peonies, we are told, are chosen not for their delicate form but for their soft acoustic qualities. There are grasses, mosses, lichens and rhizomes, too. Within this architectural space of knowledge and culture, the carpets underfoot echo the natural world and perhaps gesture to Glasgow’s affectionate local epithet of a “dear green place”. Among the black and while archival images, Price’s almost psychedelic pattern animations create an afterimage that I take with me along with the acid-yellow exhibition booklet. There is a lot to think about here.

• Elizabeth Price: Slow Dans (originally commissioned by Artangel) will open at the Gallery of Modern Art, Glasgow, from 12 January 2023. 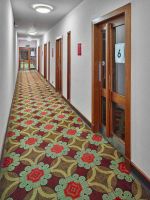