Gustav Klimt: Artist of the Century and Egon Schiele: The Jubilee Show

Gustav Klimt: Artist of the Century and Egon Schiele: The Jubilee Show

The Leopold Museum in Vienna celebrates the work of two of its greatest painters, Gustav Klimt and Egon Schiele, with concurrent exhibitions that underline their enduring relevance 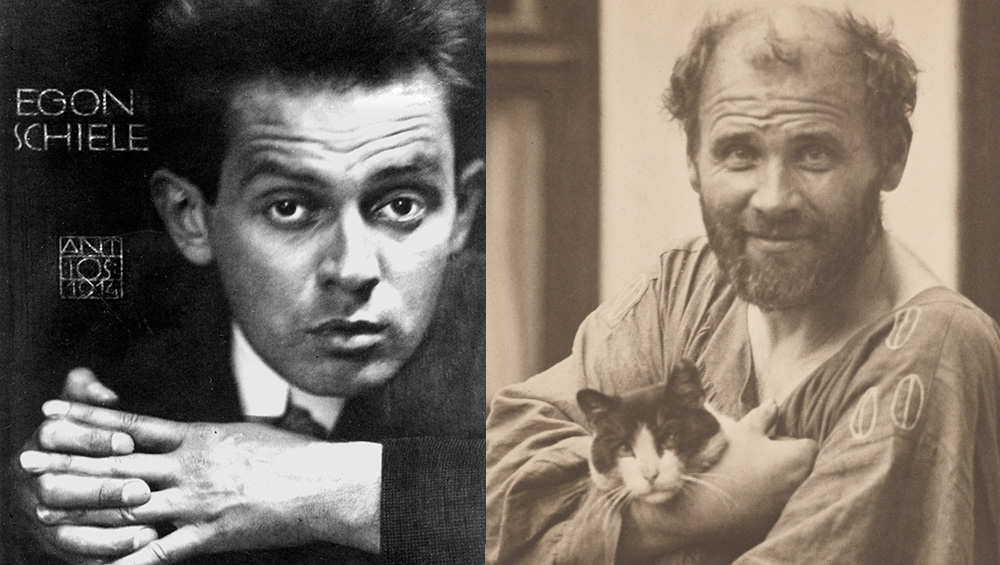 The Leopold Museum, Vienna
until 4 November 2018

One hundred years ago, two of Vienna – and the world’s – greatest painters died, as the first world war drew to a bloody close, imperial rule ended and millions died of a flu pandemic. Now, at the Leopold Museum, the work of Gustav Klimt and Egon Schiele is celebrated with concurrent exhibitions, in which their interpretations of the life around them underline their enduring relevance.

In darkened rooms that feel like vaults, somehow, compared with the bleaching summer light outside, Artist of the Century, an array of masterpieces by Gustav Klimt (1862-1918) lines the walls. Demure, reserved and formidable, the figures who first emerge show Klimt’s excellence as a classically trained portrait painter, with Portrait of a Woman (c1893) and Klara Klimt (c1880) particular highlights. Although he famously rebelled against the conventions of the Künstlerhaus (as Schiele did later), it is fascinating to see how his careful observations of the human figure became the foundation for his later subversions. 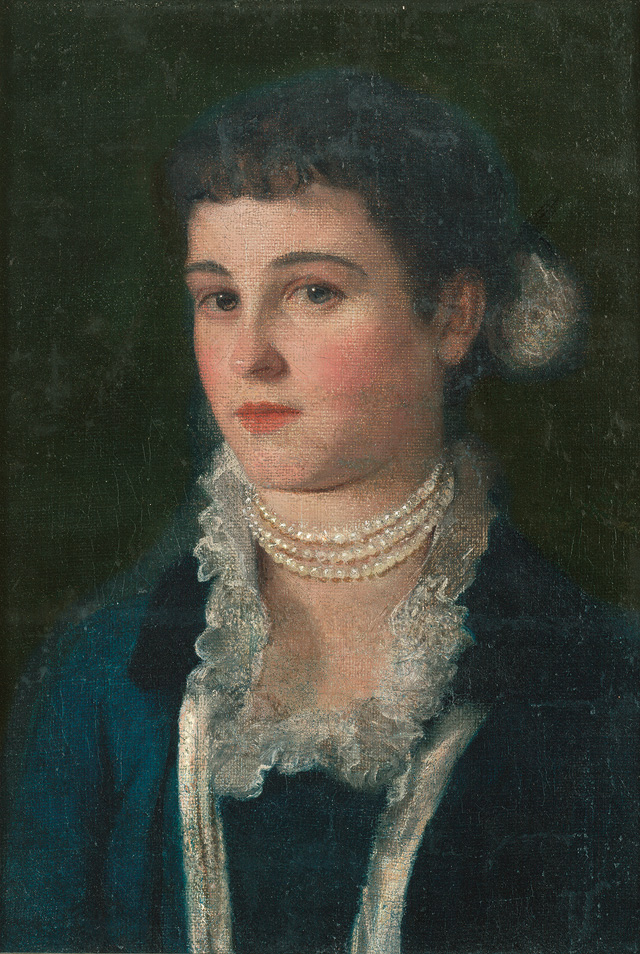 In Schubert at the Piano (1896), for instance – an ethereal, otherworldly study of the pianist in profile, surrounded by girls and warm tones of red and cream – the beginnings of Klimt’s development of a sensual, expressionist style are evident and absorbing. In Friends (Sisters) (1907), painted nearly a decade later, Klimt presents a glamorous woman in a long black fur coat and velvet hat, with her sister behind her in similarly striking attire. The elongated and formidable figures, although in an everyday scene, create a sense of tension and admiration – alluring and enigmatic in their quiet, compelling drama. 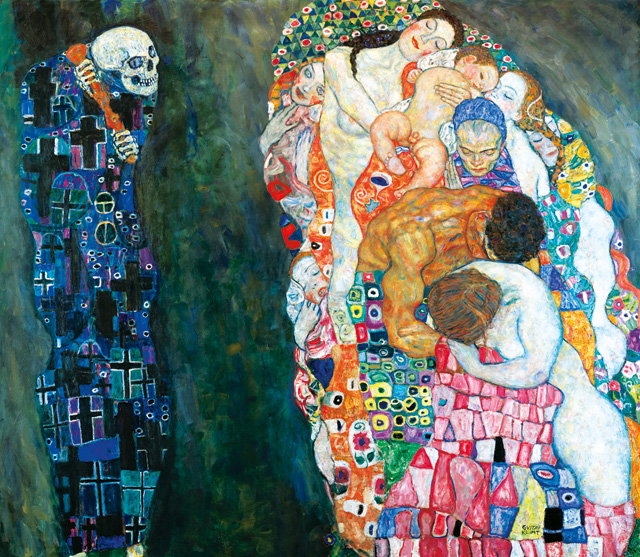 Eight years later (or a room later, in the exhibition), the famous Death and Life (1915) is a bold and defiant vision of humanity, in its perpetual dance with death. Creating a sort of waltz, its entwined lovers, mother and child, are especially luminous and mesmerising, displayed in a dimly lit room within a room, where the colourful figures shine out against the retreating, but ever-present melancholy of death.

The drawings that surround the larger pieces are, in a way, the most compelling aspect of the exhibition, however; at least, they draw my gaze the longest. Klimt’s line is so sparse and yet elegant, the enigmatic expressions of his subjects so simply captured; in Seated Lady with Ornamented Shawl in Profile from the Left (c1910), for instance, and Bust Portrait of a Young Lady With Hat and Cape in Profile from the Left (1897/8), the brilliance of the larger, spectacular paintings is distilled and equally fascinating. His artistic vision, in these sensual drawings, seems in a way in its most direct form.

A few floors above Klimt, is Egon Schiele (1890-1918), to whom he was a mentor and great friend. The Leopold’s Jubilee Show of Schiele’s work is a chance to see the broader repertoire of an artist who is known mainly for his erotic works. Showing paintings, drawings and other archival material, the exhibition is structured around key themes in his body of work, in a similar pattern to the Klimt show: Schiele’s self-assured subversion of traditional painting and his development as an expressive painter; the presence of “the mother” and children in his work (Dead Mother, c1910, particularly beautiful, however melancholic); his interpretation of ideas related to religion, spirituality and individual transcendence; atmospheric houses and landscapes; and the highly charged interrogation of individuality in his self-portraits. The latter theme, presented as a room of “Egons”, is particularly entertaining and even charming – for all the machismo and youthful angst, there is something quite tender about Schiele’s readiness to bare himself in such a direct and fearless manner.

Both Klimt and Schiele were independently fascinated by the human form and the entanglement of people – their dances with one another and the formidable ideas they wrestled with. In showing the Schiele and Klimt exhibitions concurrently, enabling viewers to see one followed by the other, it is hard not to think of them as two parts of the same hypnotising show – a duet, of sorts – or, given that we are in Vienna, a waltz.

Certainly, having seen Klimt first, Schiele’s figures, which, on their own can feel overwhelmingly angst-ridden at times, and a room of his work claustrophobic, even; when seen in the context of Klimt’s work, they take on an animated, comical and youthful spirit that lightens the overall experience. While his paintings are serious, melancholic and tortured, the lighter aspects become more noticeable – the bravado of his self-portraits, the rebelliousness of his erotic figures, the joyful embrace of a landscape’s palette, with its golds and reds and burnt-orange tiles. The direct gazes of Egon himself, as well as the defiant women he presents, are captivating, their sensuality clearer in the light of Klimt’s softer figures downstairs. The twisted, tortured figures seem balletic at times, even as they express passion and angst with every muscle, line and graceful, if pained, pose.

It seems a great privilege, to be able to absorb the work of two modern masters together and, moreover, to see the mad harmony that their painting, seen concurrently, creates. While the idea of male genius is often noted to obscure female artists and their work, it also, in a way, distracts from the ways in which male painters collaborated and influenced one another as well. In showing Klimt and Schiele’s work under the same roof, and thus underlining the shared ideas, values and influences, the Leopold inherently celebrates the friendship of these men, and the creative spark and camaraderie that benefited them both. In a city so renowned for dance as well as painting, there is something especially charming and entrancing about retrospectives that form a spectacular duet. 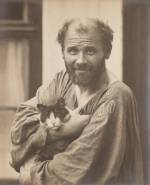