In a two-part exhibition, the artist has used his trademark porcelain vessels, two buildings of great significance and a library of books to trace a universal story of exile and translation 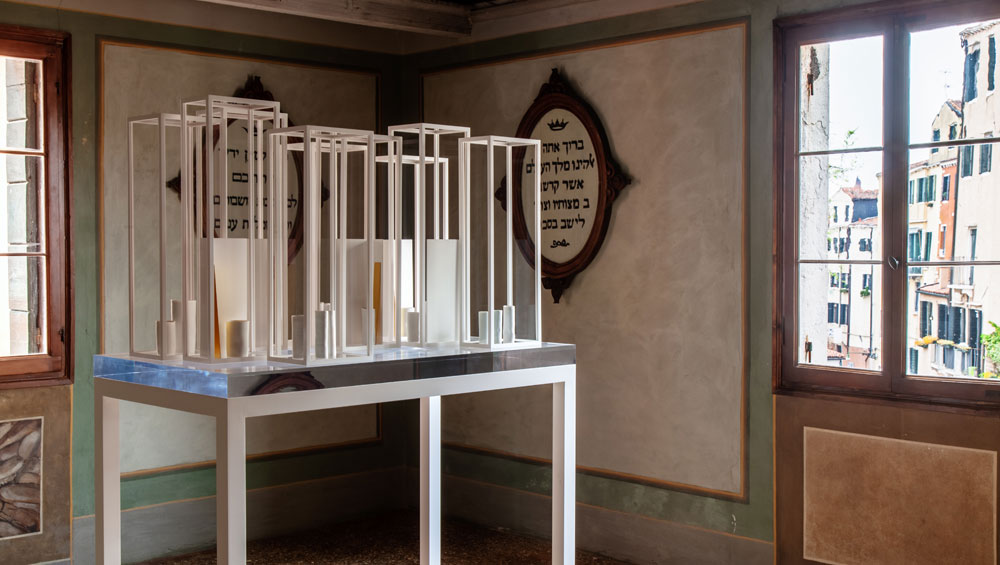 Amid the clamour and massed creativity pulsing through the galleries and palazzi of Venice in summer 2019, there are many events outside the biennale, but two of them in particular stand out. On the Island of San Giorgio Maggiore, inside the vaulted splendours of its cathedral, Sean Scully is making his mark on this venerable place of worship. 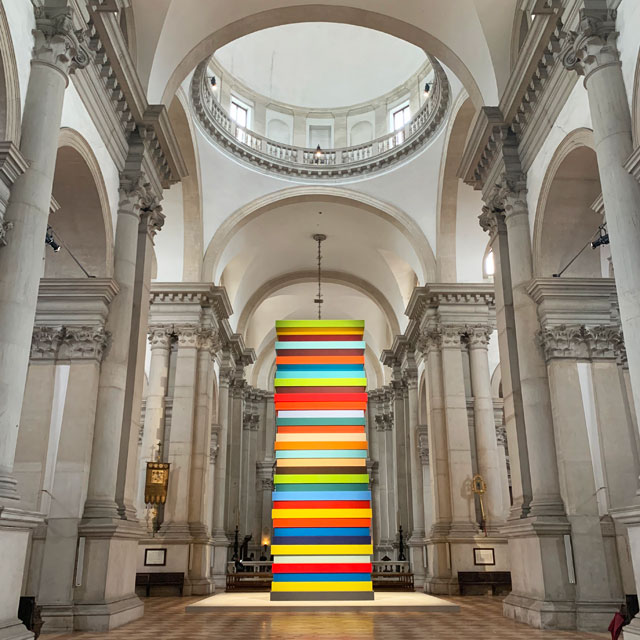 A looming tower of thick timber slabs, stacked in all their bright, “look at me” colour-clashing intensity, dominates the heart of a building regarded as one of Andrea Palladio’s finest; exuberant and eye-catching as Scully’s work is, I am not a fan of the way its bulk and bright hues eclipse all that is subtle and delicate in its surroundings. A very different kind of conversation between art and architecture is going on in the understated streets of the Jewish Ghetto. 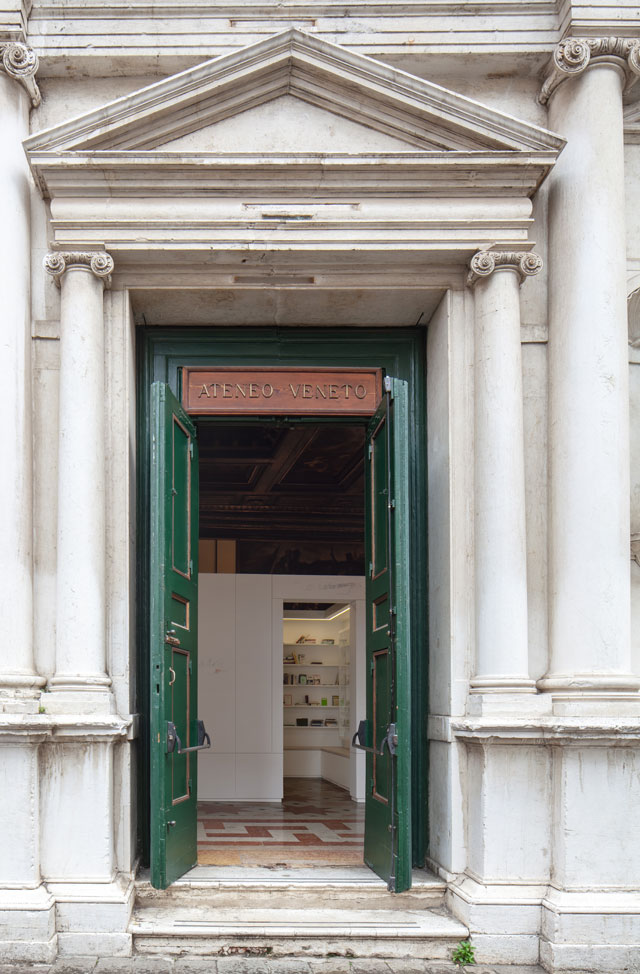 Established in 1516, this area gave birth to the name and concept of the ghetto, as one of the first physically demarcated neighbourhoods enclosing those of the Jewish faith (until Napoleon seized the city in 1797 and dissolved its boundaries). It has always been “a place of translation, a testing ground for comprehension and nuance,” says Edmund de Waal, artist, ceramicist and author. Over the centuries, confinement bred connection and community, as the Italian inhabitants were joined by German, Flemish, Persian, Ottoman, Spanish and Portuguese exiles. De Waal says: “Everything is plural here, one history reaching out to another, a palimpsest of voices.”

Set inside Venice’s Jewish Museum, a building that has been a refuge, school and place of worship for hundreds of years, is the Canton Scuola, one of the district’s five synagogues. Here, De Waal has initiated a new conversation – the first a contemporary artist has been invited to spark up within its walls. You cannot simply stroll in and encounter his work, though – it doesn’t sock you in the eye, Scully-style, the minute you walk in the front door. You have to buy a ticket for the museum and guided tour first, so the significance, the careful evolution and husbandry of this building is very much part of the experience. And you must walk up the staircases to find De Waal’s works on the second and third floors. Against the simplest of settings - white walls, wood-framed windows, terrazzo floors - De Waal’s trademark minimalist vessels in white porcelain are choreographed in what he describes as “a call and response between materials”. In his placement, as much as his creations, he wants to “sound out these spaces”.

For this installation, he has ventured beyond his usual white palette, coating thin, oblong slivers of porcelain in gold and silver; there are also slices of translucent marble - square and oblong additions that form complementary, geometric counterparts to his small, elliptical vessels, both glazed and unglazed. The low vibration of their blank materiality seems the perfect foil to the high-flame glow of gold, the moonlight-on-water shimmer of silver. And the presence of these precious metals somehow flags up what De Waal calls the “unimaginable frailty” of the porcelain they envelope.

There are 10 works spread across the two floors, in varying configurations: a tall vitrine inhabits the third-floor stairwell, its quiet luminescence contrasting with the sunlight pouring from the adjacent window. Called A Different Breath (2018), five shallow white frames sit vertically within it, hosting porcelain, marble and silver figures. In each frame, they cluster or separate, like beads on an abacus, like lines of morse code. 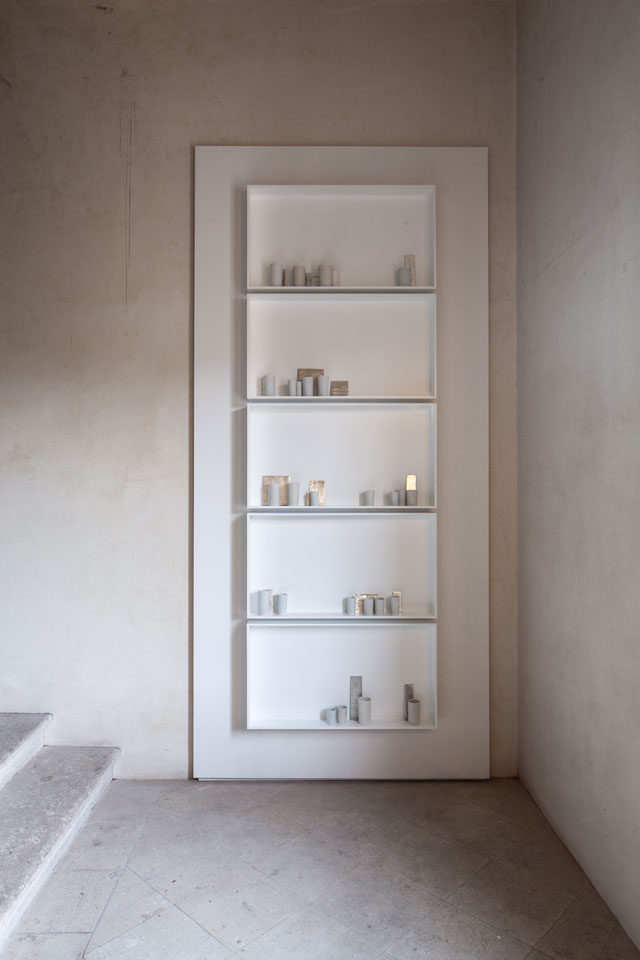 The Psalms of the Old Testament were in De Waal’s thoughts as he created the works for this exhibition. “It’s all about being in one place and yearning for somewhere else,” he told BBC Radio 4 when he was interviewed before Psalm’s opening. But are these vessels the words or phrases, or are they the silence, the space between words? Having forgotten whatever familiarity I may have had with the Psalms in my childhood, I can now only meditate on the silent communion between the vessels, their arrangements’ evocation of sympathy and difference, inclusion and exclusion. But for the faithful of the three Abrahamic religions, I can imagine how much richer and more meaningful these simple objects may appear, as they clearly do for De Waal, whose background embraces a long line of Jewish ancestors. De Waal’s grandparents were exiled from Paris and Vienna during the Nazi regime although he himself had a high Anglican upbringing (his father, the Rev Dr Victor de Waal had converted to Anglicanism and eventually became the Dean of Canterbury Cathedral). 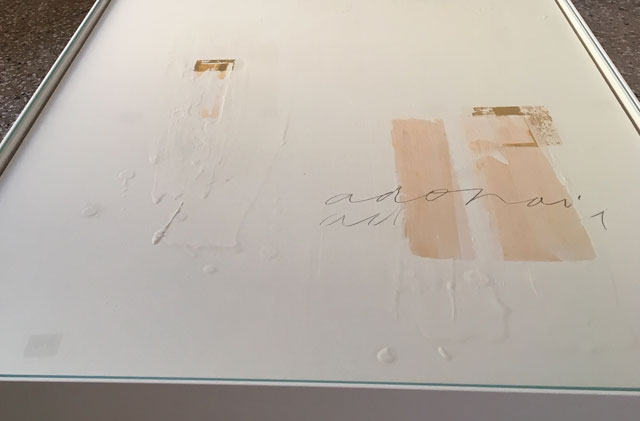 Exile is also very much the matter in hand with these works. Some of them recall particular “poems of elegy and remembrance” by Osip Mandelstam and Rainer Maria Rilke, says De Waal. Handfuls of words are smeared or scribbled into porcelain, or placed on broken fragments, which are nestled inside tiny porcelain boxes or pots. On a table on the second floor, one work has been made in remembrance of the 17th-century Jewish poet Sara Copia Sullam. On its flat surface, De Waal has written text from Psalm 137 By the Rivers of Babylon into porcelain slip, brushed over gold leaf. 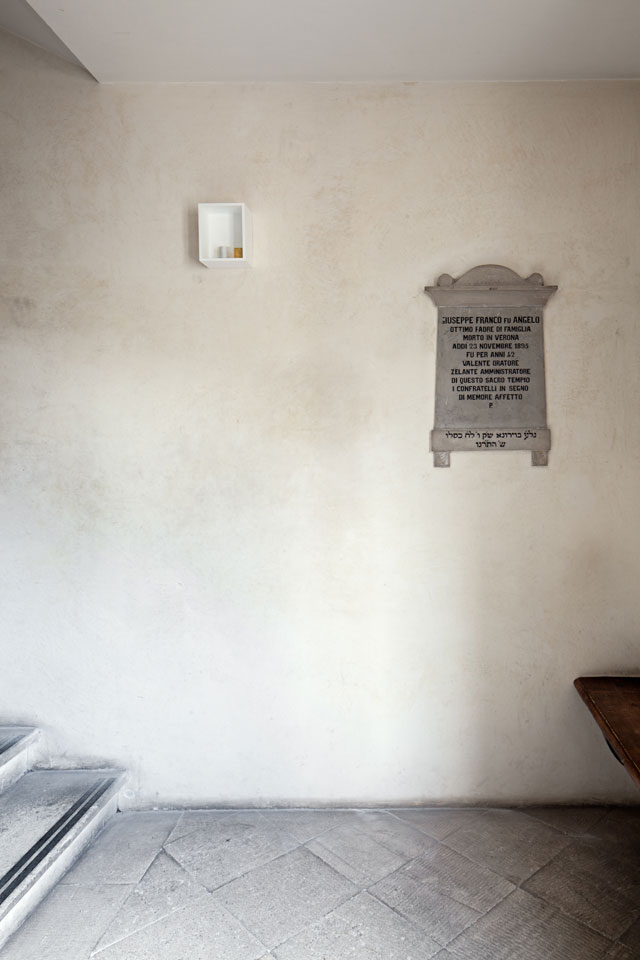 There are works in places where you might miss them: a small framed, Adonai (2019) sits high up on a wall in the staircase. Another work, Tehillim (2018), is visible through glass that looks into the corridor at the threshold to the Canton Scuola synagogue. 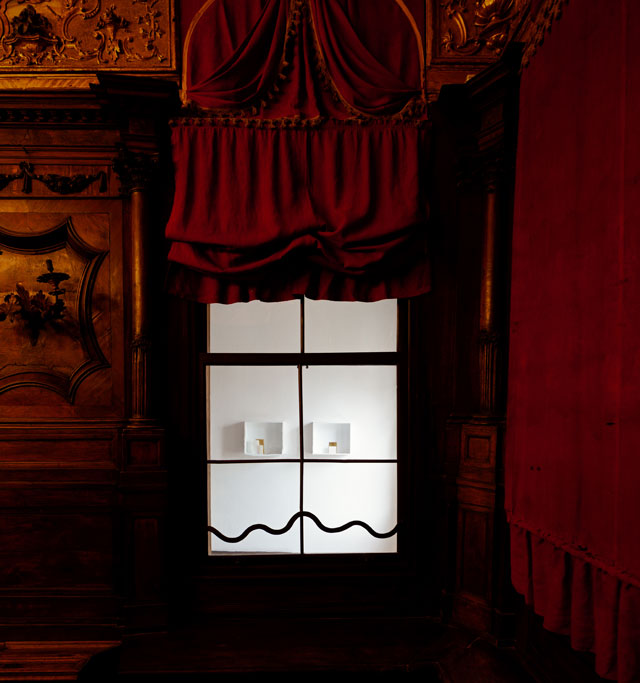 Sukkah (2019), the boldest departure for De Waal, is a small, mini-Miesian city of clustered steel-and-glass towers, each housing porcelain vessels and slices of gold in attitudes that seem to simultaneously express separation and connection. A sukkah is a place in which Jews spend part of Sukkot, the Feast of the Tabernacles, which commemorates 40 years of wandering in the desert. De Waal says he wanted to evoke that feast’s celebratory ritual of taking shelter and meals in gardens or temporary structures. He has placed this piece on a tall table on the top floor, to be “high up, a memory of city”. Holy places, De Waal says, are high places. 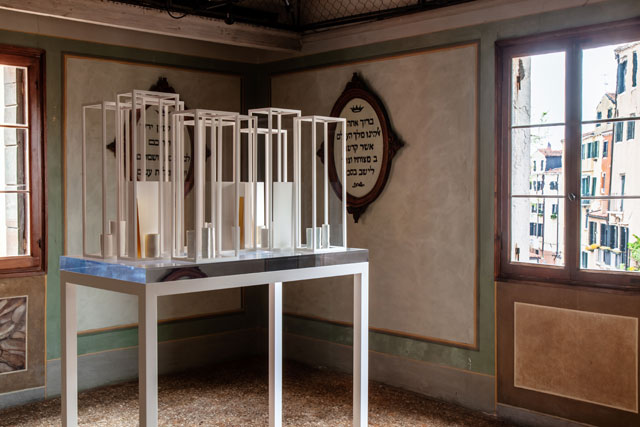 This exhibition is a two-part installation. The other part is a short water-taxi ride away, or about half an hour’s walk through the winding Venice streets, at the Ateneo Veneto’s great 17th-century Baroque building, which has been a centre for culture and debate for the past two centuries. At the centre of its grand hall, De Waal has placed an open-topped white box, inside which are row upon row of books – about 2,000 titles – written by those in exile, from Ovid to Victor Hugo. The books come from 58 countries and all have been donated and collected for De Waal’s Library of Exile, a project that looks set to have a life way beyond this exhibition (two further locations around the globe were mentioned in its inaugural week, one of them the British Museum). Between the shelves are four new vitrines, a continuation of the Psalm family. In the aforementioned BBC interview, De Waal said: “The structure of these vitrines is based around the first ever printing of the Talmud, which happened here in Venice. What you have is the holy words, the sacred words, in the middle and all the commentary in all the different languages spaced around them. These are like pages of scripture transformed into ceramics.” 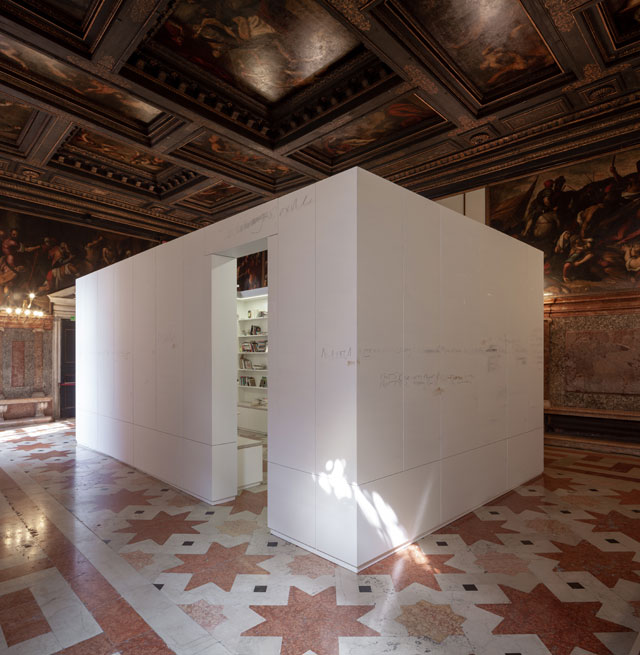 On the white exterior of this library within a library (there are 50,000 priceless tomes in the upstairs reading rooms), De Waal’s spidery handwriting is scrawled into the top porcelain layer, which reveals gold and wood underneath. One phrase in particular stands out: “It’s always personal – I’m making this for my great-grandfather Viktor, who saw his library stolen in Vienna.”

He has also written out some of the lost libraries of the world – including Antioch, Alexandria, Córdoba. He says: “This is a powerful, elegiac history of books that have been destroyed by war, by religion, by the forces that try to close down conversations. For me, it’s a very personal history, only 400 yards away from where the Talmud was burnt in the square outside San Marco. My great-grandfather’s library was looted by the Nazis, it is still lost. Lost libraries matter.” On these walls, he also quotes German poet and essayist Heinrich Heine: “Wherever they burn books, they will also, in the end, burn people.”

“I am the son of a refugee,” says De Waal. “The one family book in this library is from my grandmother, who was a novelist. This is about where do you belong and where does language sit within that?” Whether this is art, poetry or literature hardly seems to matter. 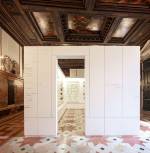 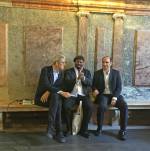 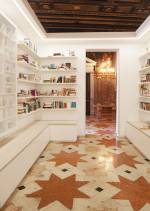