Eddie Martinez: 'I just want people to interpret the work how they want'

Eddie Martinez: ‘I just want people to interpret the work how they want’

Eddie Martinez talks about his latest show, Cowboy Town, at Timothy Taylor Gallery in London, the influence of US politics on artists, and why he looks at his work on his phone all night 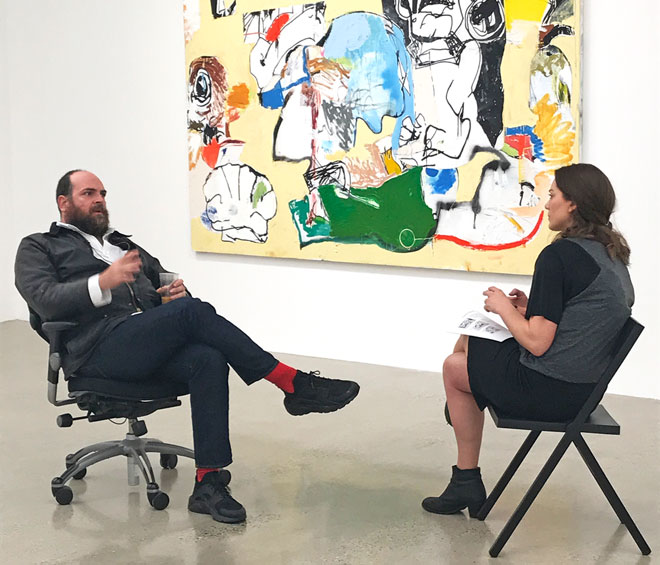 Cowboy Town, American artist Eddie Martinez’s second exhibition at the Timothy Taylor Gallery, London, is a show of paintings done since the start of last year. Martinez, who was born in 1977 in Connecticut, lives and works in Brooklyn. In 2013, he was included in New York Close Up, Art21’s digital documentary film series, and has received much critical acclaim. Roberta Smith, in the New York Times, said he has “exceptional gifts as a painter and draughtsman, which he exuberantly combines”. Before heading back to New York from London, he took time to talk to Studio International about the vivid and dense new body of work that is Cowboy Town.

Kate Tiernan: Some might say that the title Cowboy Town is an accurate description of the current situation in America.

Eddie Martinez: Everyone in New York is devastated [about Donald Trump becoming president of the US] and it’s just like non-stop: it sucks. It’s really upsetting. At least the onslaught of executive orders has chilled out; every morning we’re not waking up to a total disaster.

KT: What do you think is the creative currency of artists in New York or the US at large to engage with the current political situation?

EM: I think there’s a lot of resistance and people are reacting in whatever ways they think are suitable. My wife and I did an art fundraiser. We raised $11,000 (£8,570) for the American Civil Liberties Union and the ACLU  matched it. Everyone is just trying to do something, as not doing anything feels crazy. The title of the exhibition is just whatever people take from it. I’m not a very political person, but I’m definitely unhappy with what’s going on. There’s a song by my favourite reggae group, Black Uhuru, called Cowboy Town, in which they describe that sort of thing: “Do you remember when the place used to run like a cowboy town?”

EM: It kind of looked like Barack Obama holding the world, and I wouldn’t claim that it’s my portrait of Obama, but it just felt appropriate.

KT: Has your process developed and shifted much over the past few years?

EM: I’ve begun employing silkscreen in the process of making the paintings in the past couple of years. I’ve always been making little drawings at home and, for the past decade, my main interest has been how to make large paintings feel like drawings – not look like them, but feel like them. So I decided to start blowing the drawings up and silkscreening them on to canvas. Half of this show is done that way.

I wanted to really capture the speed and immediacy of marker drawing, so I just started blowing them up. [He then sends his drawings out to be silkscreened on to canvas.] They come back to the studio and it’s a bit like a piece of paper with a drawing on, and I stretch it and go from there. Sometimes it gets completely obliterated and sometimes not. I feel like the mandala painting [Mandala #4 (Open Night), 2016] is the most coloured in within the lines. And, again, I don’t do it with every painting, but it is really fun. I get super-giddy when the silk-screened canvases of the drawings come in and it’s like five big colouring-book pages. So I stretch them and just go to work, and it has been really fun. That informs other parts of the process and then I feel it is too easy, so then I’ll paint over it.

KT: For you, does the drawing become abstract in the silkscreening process?

EM: No, I know what you’re saying, but I don’t think that applies really as it’s not like it’s a tight drawing and I’m relying on the scale to make it something that it’s not. I know what it’s going to be, it’s just bigger. So if it’s a drawing that’s more abstracted, it will just retain that, and vice versa.

KT: Do you often change the scale of the paintings as you are working on them?

EM: For instance, Cowboy Town (2017) is the same height and width as Mandala #4, but there was an extra foot of white on the left of it that just wasn’t working. After a couple of months of not wanting to scrap it because I knew it had a lot of potential, I just got some new stretcher bars and cut it down and re-stretched it and worked out beautifully. I don’t really follow any rigid rule system.

KT: How significant is the narrative and figurative in the work for you?

EM: I don’t want anyone to feel obligated to think anything. I don’t have anything in particular in the work I want people to see, I want it all to be interpreted. That said, obviously there is something going on here. I think the only narrative would be that this is how I communicate best, that’s the extent of what I’m willing to say. I put everything into them so I don’t have to talk about them and I don’t want to tell a story. I don’t deny that they feel like there is a narrative and that’s cool, but I just want people to interpret the work how they want.

KT: You talk about music being part of your process. Do you collate images and writing alongside this in the development of new work?

EM: I read. I don’t collect imagery to fuel the work, not specifically. I think I mostly reference my own imagery.

KT: How would you describe the influence of postwar abstract expressionism on your current work?

EM: Abstract expressionism is one of the movements that has influenced me most, and not just the men, but the women, too. I think it’s really short-sighted that it’s seen mostly as a masculine thing. There were men, but there were also women doing the exact same thing and just as good. I guess Willem de Kooning and Philip Guston [wouldn’t be pigeon-holed] because they went back and forth. I’m most interested in not pigeonholing anything. I don’t want to make any rules. I’m the kind of painter I am, and I’m influenced by what I’m influenced by, so I’m never going to make a solid black square and call it abstraction. It’s what I think is abstraction.

KT: At what point do you consider a work is finished?

EM: I work on them a lot at the same time and I think largely it’s finished if I think there is nothing else I could do to improve it and, a step further, if I do anything else, I risk fucking it up, so there’s no point. If there is really nothing else that can be done and I like it and I’m happy with it, then it’s finished.

KT: Can you talk a bit about your studio?

KT: Is painting the bronze sculptures a similar process to the canvases?

EM: Just a different way of expressing the same thoughts and feelings. Obviously, they are different things and the biggest difference is that painting happens all the time and sculpture is more deliberate – I have to block out time and get everything out. My studio is big enough now that I don’t have to do that, but that’s just how I’ve taught myself – that I’ll block off some time and I can still have the paintings up and stuff, but I can walk in and make a mark on a painting and walk away, but with sculpture it’s a different thing. I have bronzes out in the studio right now that I’m painting and I’ll pull a colour that I’m particularly excited about and apply it to a bronze and it’s not like, then I staple a bronze to a canvas, but I make drawings of the bronzes, too, so it’s like self-cannibalism.

We did a huge presentation of sculptures at Frieze last year and, here, I just wanted to have a simple painting hang. The first show I did here a few years ago was painting, sculpture and drawing. You get older and you feel you don’t have to prove yourself every time you have any exhibition, and sometimes you just want to hang some pictures on the wall, so that’s what I did here. I’m very happy with it, I’m very happy with the hang.

• Eddie Martinez: Cowboy Town is at the Timothy Taylor Gallery, London, until 6 May 2017. 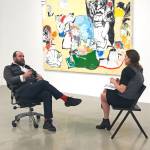 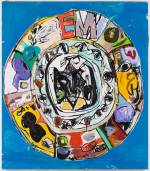