It’s all about power – electricity and power relations – and this dynamic opening night for E-Werk Luckenwalde, curated by Block Universe, combined all varying aspects in an electrifying manner

If you want to ensure that the launch of a new arts centre goes with a bang, who better to invite to curate the opening night’s programme than the now veteran London-based international performance art festival and commissioning body Block Universe? Founded in 2015 by Louise O’Kelly, the all-woman team, which now includes Katharina Worf, Xica Aires and Tatjana Damm, is celebrating its fifth year of programming, and, following a successful fifth edition of the annual festival in London in May, and the first performance festival as part of the Venice Biennale, 14 September saw the already-international team take its cutting-edge mixture of contemporary visual art, dance and music to the seemingly peculiar location of Luckenwalde, a small town 30 miles south of Berlin, in the middle of rural Brandenburg, in the former East Germany. The occasion was the launch of E-Werk Luckenwalde, a new arts centre, sited in a former coal power station, acquired in 2017 by Pablo Wendel, the CEO of Performance Electrics, a not-for-profit energy provider he established in 2012. The conceptual art and energy outfit produces and supplies what Wendel terms “Kunststrom” (or “art electricity” – produced through art installations, sculptures, performances and interventions, which employ renewable energy technologies).

Together with his partner, Helen Turner, former senior curator at Cass Sculpture Foundation, near Chichester, the near derelict venue in Luckenwalde has been rescued and restored, including such beautiful original elements as a stained glass window depicting a fist clenching a burst of electricity, and, of course, the turbine hall (think more intimate and art deco than Tate Modern’s massive version). As well as inviting in two resident artists, the Frenchman Nicolas Deshayes and Lucy Joyce from the UK, to produce the inaugural half-year-long exhibitions, Wendel and Turner worked with O’Kelly and her team to produce an evening of performance as electric as the Kunststrom now being produced by the venue itself. 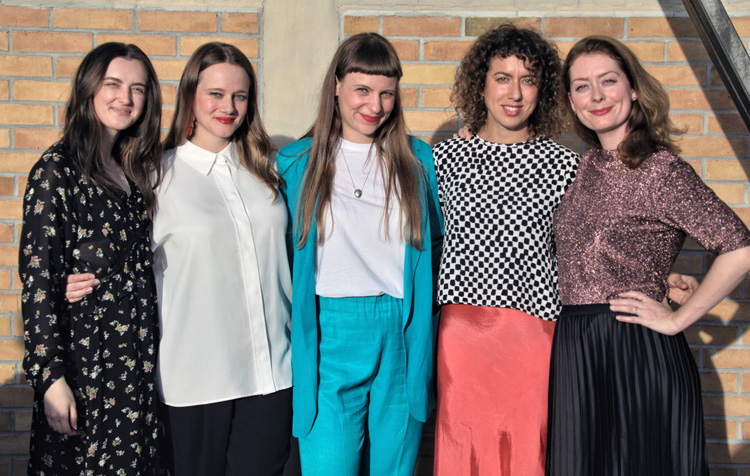 When I met with the Block Universe team on the afternoon of the launch to talk about how they became involved and what they envisaged, one thing on which they were all clear was that the launch of an institution like this was to be “an epic thing”, and Wendel’s own contribution, Coal, produced under the auspices of Performance Electrics, and the first performance of the night, saw the almost inconceivable become reality. The power station – founded in 1913 and disconnected from the grid in 1989, after the fall of the Berlin Wall saw mass economic migration to the west render the company that had taken on the station bankrupt – once again began producing electricity (using spruce pine woodchips from a neighbouring factory and a clean process) and was reconnected to the German national grid.

The aim is for the station to create enough energy – or Kunststrom – to make the four-storey venue sustainable, as well, it is hoped, as to provide for 200 households. During the opening piece, Wendel, kitted out in hard hat and goggles, disappeared into the engine room, and spellbound attendees watched via a live feed in the turbine hall as he crawled through the mechanisms and tunnels, performatively reconnected the station, and emerged with a blackened – but very happy and proud – face. 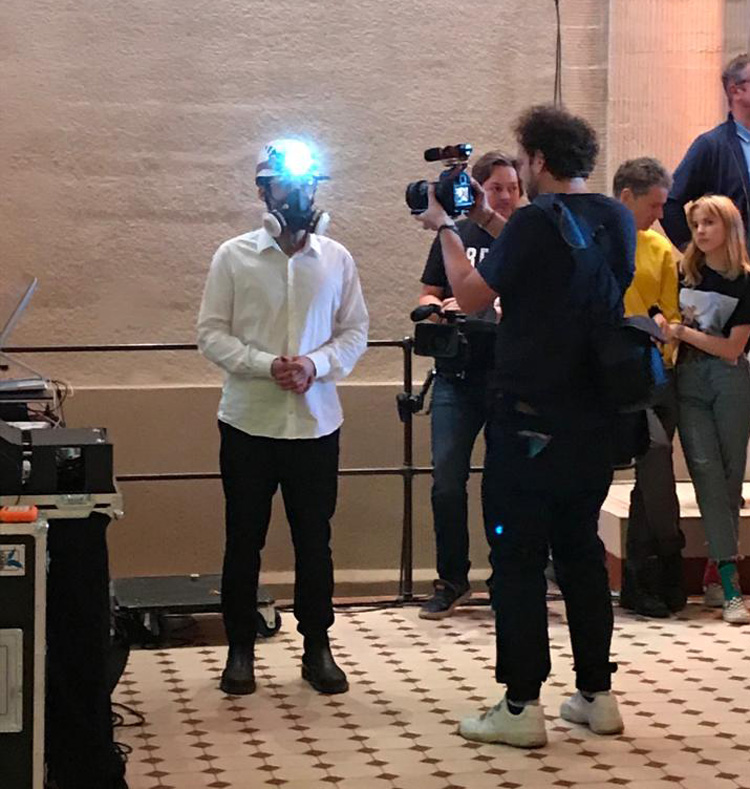 The Block Universe team were keen from the outset to bring together a mix of UK-based and international artists. They had worked with many of them before in London and wanted to give them the opportunity to expand their CVs. After all, the festival was founded in the first instance to support artists working with performance, since, at the time, there weren’t really any dedicated entities for performance in London and, accordingly, no consistent programming of it either. (This is, of course, going back pre-Tate Tanks – if anyone can remember such a time!) What the team was looking for here, however, was much more of a cultural dialogue across borders – especially in these uncertain times with Brexit looming. “It was really important for us to be quite proactive,” Worf says, “and to take a position on that as well, saying, actually, it is really important that we continue this conversation.”

The initial site visit to Luckenwalde was in June and the curators were already able to bring with them the artists they had in mind. “They got really excited by the opportunity and it was really interesting to see the spark in their eyes,” says Worf. “It’s fascinating to be able to choose wherever you want to be in the space and I think it really got them thinking. And then, afterwards, we sat down to eat and we had a lot of discussions with them and put it all together. Now, tonight, it’s really going to be a journey through the building – we are going to spill outside, then we’re going to go back in, and it’ll be really dynamic throughout.” 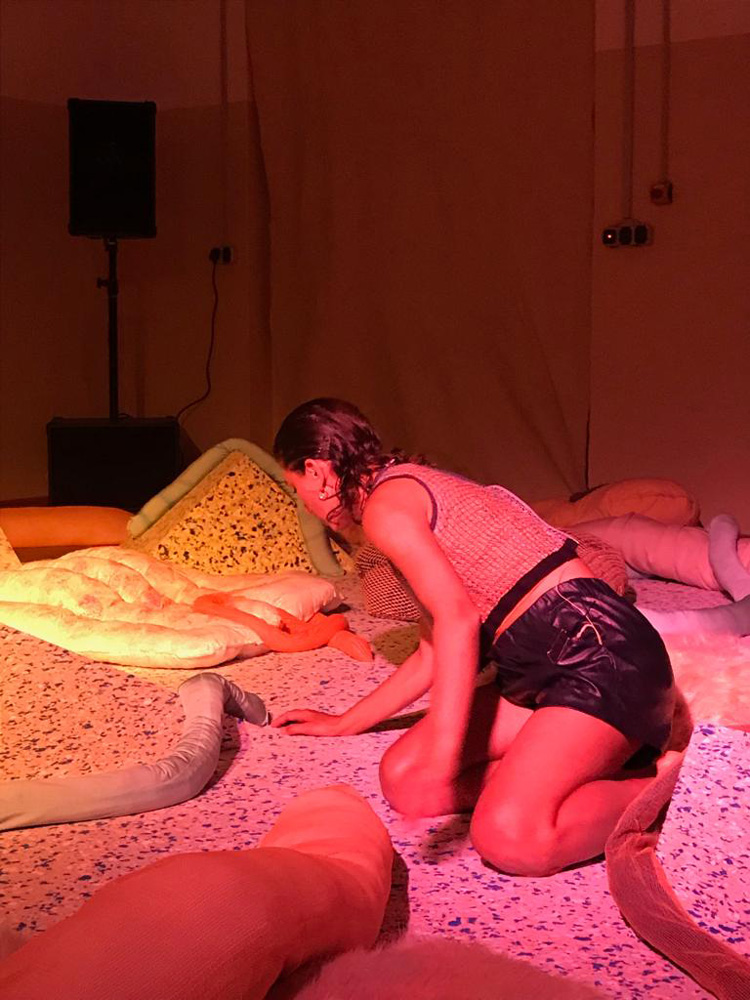 Another, more physical, bodily experience was the intimate performance by Fernanda Muñoz-Newsome, who invited a limited number of participants into an almost claustrophobically small space, and proceeded, to a soundtrack by Josh Anio Grigg, to weave her lithe body in and out of the crowd, gently caressing cheeks and arms in passing, before moving to the far end of the room, where foam shapes provided makeshift cushions, on to which the audience members were beckoned, to make themselves uncomfortably (in all senses of the word) at home, as Muñoz-Newsome continued her routine. This was certainly one to be experienced – and remembered. 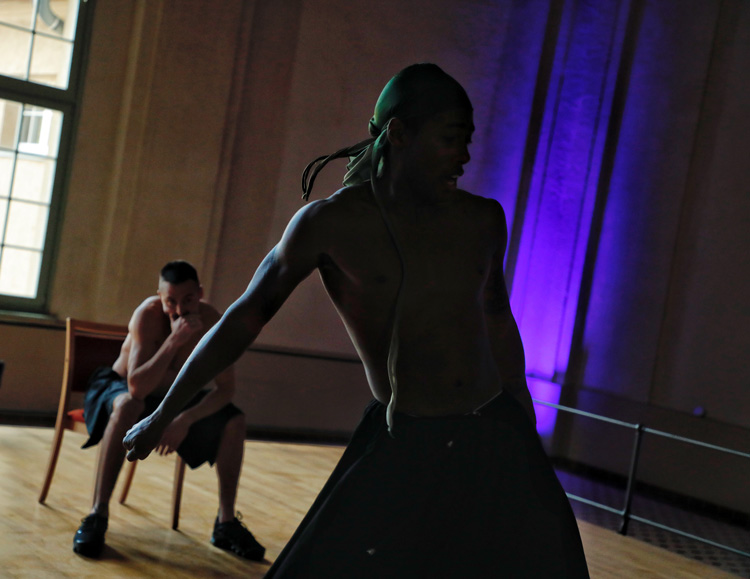 Marikiscrycrycry, a project led by the American-born, London-based choreographer Malik Nashad Sharpe, performed an excerpt from their new work He’s Dead, taking as its starting point the question: “Was Tupac depressed?” As a whole, the project, and Sharpe’s work, explores ontologies around blackness and queerness, and, in relation to E-Werk, the concepts of defence strategies and power structures were foremost. 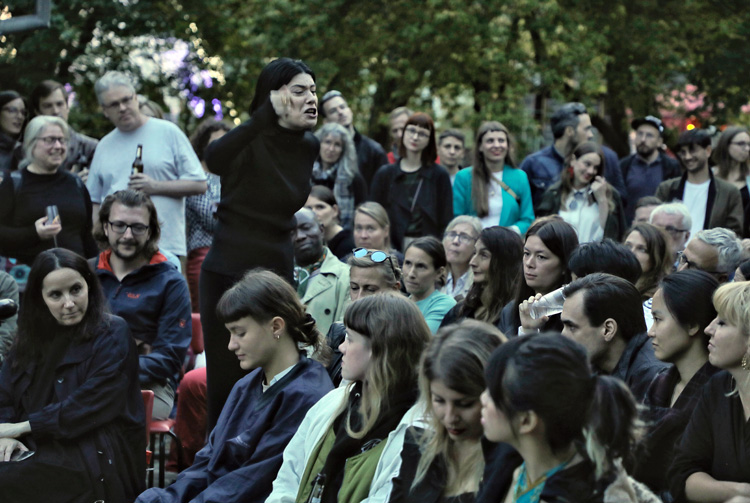 In terms of music, Croatian-born, Amsterdam-based Nora Turato developed a pre-existing linguistic performance work for the night, in which she used language as an instrument, incorporating elements of high and low art: literature, everyday conversation, advertising slogans and social media posts. The closing performance, before the ensuing “after-show” party, was a newly commissioned musical set by Charismatic Megafauna, taking place in the outdoor geodesic pavilion, or Fluxdome, created by German collective Umschichten, as the first in an annual commission. 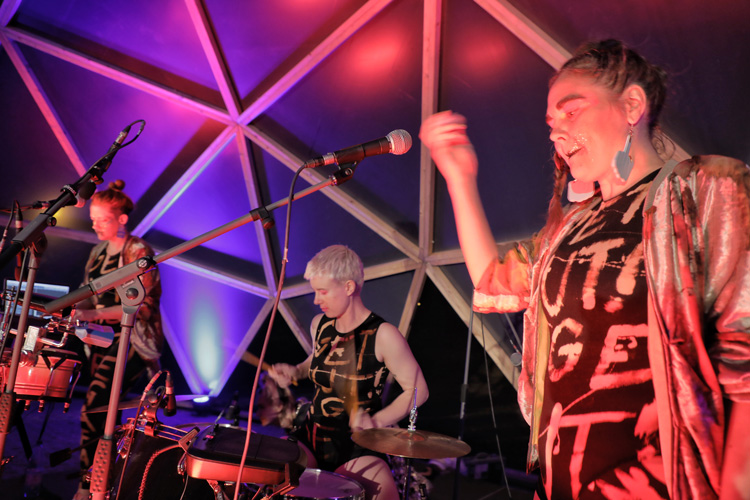 The dance-punk trio from London also formed out of their frustration with power dynamics, the trigger being the frequently all-male lineups at even what are thought of as “progressive, cool” festivals. The three women complained to the organisers of one, telling them to be more conscious of their politics, and, unexpectedly received an offer – not to be turned down – to be put on the main stage the following year, should they form a band in the interim! Known for their original costumes, the three women play a single drum kit, accompanied by girl-gang chants and mutant synth freak outs. Perfect for keeping the energy levels going, and doubtless producing a non-negligible amount of Kunststrom itself. 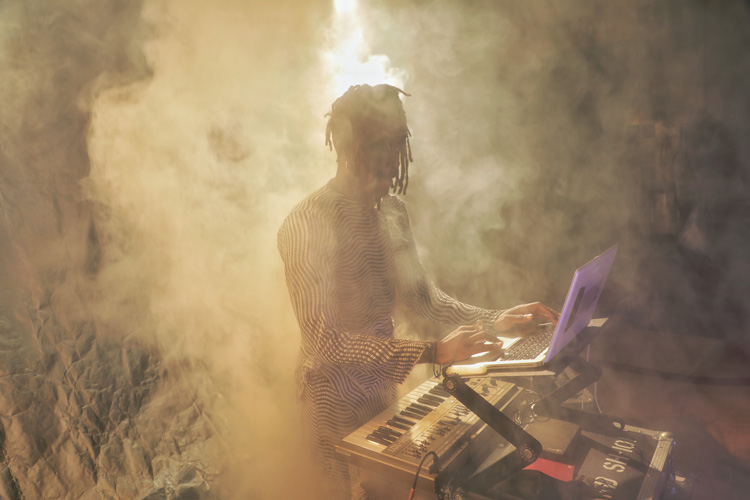 Perhaps the two most challenging performances on the schedule, however, were the offsite – albeit just across the road in a derelict Bauhaus swimming pool – immersive performance-cum-installation by Rowdy SS and Nina Beier’s Class (2019). Rowdy SS created a participatory – and entirely site-specific – live-soundscape, with incense, lasting an impressive 105 minutes. “The artists are growing with us,” says Worf. “Rowdy being in this big space, I mean, this is a very big new commission for him.”

As for Beier – she uncovered the Olympic history of Luckenwalde as a famously successful producer of world-renowned wrestlers and worked with this history, and the ongoing Luckenwalde Sportclub, to create a performance in the turbine hall, once more interested in power structures, dominance and authority. Wrestling became a perfect performance vehicle, as a midpoint between skilled athleticism and staged wins. Working with 11 women and seven men, each wearing a different perfume, Beier’s piece mingled different scents with bodily sweat, violence with beauty, and control with – as far as the audience was concerned – lack thereof. At the end of the performance, the lights went out, and all that remained was the heady scent of power.

As hoped for, the night was a huge success, with a massive turnout, not just of the Berlin art world, but also the international, and, perhaps most importantly, also local residents. This is something else important to Block Universe. “As a festival that happens once a year,” says Worf, speaking of the London event, “it’s really important that we’re also creating a community, maintaining relationships with those artists in your life, and offering them opportunities.” Power Night, therefore, seems to have been an embodiment of Block Universe’s core goals. The curatorial team, the artists, and Wendel and Turner, all seem to have been winners in this fantastic international collaboration. May both E-Werk and Block Universe go on to (continue to) thrive.