Dissent Popes and Swandown: a taste of Cafe Gallery Projects

Dissent Popes and Swandown: a taste of Cafe Gallery Projects

Recent accolades likening South London to New York1 may be slightly exaggerated, yet complimentary comparisons between The Serpentine Gallery in Kensington Gardens2 and the (not long ago extended and revamped3) Cafe Gallery in Southwark Park are particularly apt as the range of exhibitions and live works curated by The Cafe Gallery continues to develop a significant contemporary archive. It is The Cafe Gallery’s three different spaces – the gallery itself, the surrounding park and Dilston Grove, a grade II-listed former church, that allows for the broad variety of works shown under the auspices of The Cafe Gallery Projects.

While Southwark Park’s lake (water birds splashing about), and the open space of variably landscaped greenery, offer a similar surrounding environment to Kensington Park, the surprising sanctuary of the cool gallery space come upon amidst the summer “scorcher” of a Sunday afternoon – most echoes the Serpentine space and importantly provides an asylum for the visitor. Outside bikini-clad bodies lie among beer bellies, babies totter, people watch people, some dogs run free and older ladies dream on. Inside Sax Impey’s Storm (large drawings and paintings), rage in white caps, mist, wakes and wash, “worked from memory, log books, photographs and charts ...”4 these almost entirely monochrome images are recollections of Impey’s experience of a “36-hour storm encountered in the Celtic Sea ...”.5 The seascapes are a world away in time space and practice from the rage against apathy that happened on 27 May (a very hot Sunday), outside The Cafe Gallery in a corner of  Southwark Park. And despite the bucolic environment and hot balmy air referencing everything from Seurat6 through Sondheim7 to Itchycoo8 and Macartha9, Rachel House’s apathy’s a drag (hosted by the CGP), managed to retain a sense of subversive indignation on an otherwise soporific afternoon.

Black bunting strung between trees, a large painted banner celebrating three ladies of punk – Patti Smith, Poly Styrene and Miss Ari Up – and posters proclaiming the site as a “space of dissent, discourse, delight and potential” waved in the breeze. Contributors assembled model boats, including a number of brightly decorated paper skiffs, a sail boat signed by all present in celebration of the event and a Cindy Doll tied to upturned plastic cups, curiously resembling the Raft of the Medusa.10 These were constructed to mark 35 years since the Sex Pistols’ Thames boat trip. “Two weeks after the launch of the Sex Pistols’ hit single God Save the Queen, and a week ahead of the Silver Jubilee Flotilla, the Sex Pistols performed a concert on a boat (appropriately named the Queen Elizabeth) on the Thames. Swiftly stopped by the police, a barney ensued and many were arrested, including Vivienne Westwood (now Dame Vivienne).”11 Three decades later the bridges in London are scattered in fluorescent-jacketed security personal and patterned with flags in celebration of the diamond jubilee but House is determined not to forget “The shock the Sex Pistols made … (It) is hard for people to understand (now). This (event – apathy’s a drag) is in that vein of protest – it’s not about nostalgia – I really hate the way carnival community has been co-opted by the government – state sanctioned – when it should be wild and Baccalaurean- more rabble rousing”.12

Bemused pensioners in sun hats watched while contributors managed their vessels on the lake and The Strawberry Thieves socialist choir sang songs of dissent and protest.

A Somali man asked: “What is this for?” I endeavoured to unravel the guilt of privilege from a liberal view point then a clear-headed colleague explained – this is what we do when we don’t believe what they show us on TV.13 Highlighting the importance of free speech the Somali man said: “the police would arrest us if we did this in Somalia.” Thus House’s art practice, while allowing some carnival and play, engages us in significant socio-political issues, and reminds us of our responsibilities “... our actions fashion history. We have to make them count”.14

And while all of this dissent, carnival and cultural exchange waxes unlyrically in the sunshine on one side of the park, over at Dilston Grove Matt Collishaw’s The End of Innocence, avideo reinterpretation of Francis Bacon’s appropriation of Velazquez’s Pope Innocent X, sits silently screaming in a digital waterfall. Projected onto the end wall of the building – the Pope, immense in scale – and repositioned into this site of sanctuary is almost overwhelmingly potent, his shimmering visage resonating every one of our most deeply-hidden and perhaps secretly-pleasurable sins.

“The presentation of The End of Innocence in Bermondsey is a kind of artistic return for Collishaw. He studied at Goldsmiths College and participated in both of the group exhibitions – Freeze15 and Modern Medicine16 – staged by Damien Hirst in the nearby Dockmaster’s Office and Peak Frean’s Biscuit Factory.”17 At that time the Cafe Gallery was the only “permanent gallery space in Bermondsey”. Now, largely due to the influence of Collishaw and his Goldsmith’s contemporaries, the area is home to a plentiful collection of exhibition spaces.

It is important to remember how far the CGP has progressed, from a rundown cafe in the middle of Southwark Park rescued by The Bermondsey Artists group, through the development that introduced artists including Patrick Caulfield, Eduardo Paolozzi and Derek Jarman to the local community,18 to today’s diverse contemporary initiative boasting a lineup of important artist patrons including Cornelia Parker, Iain Sinclair, Richard Wentworth and Richard Wilson. Later this month (27 June) Dilston Grove sees the opening of Swandown, a collaborative work by the artist and film maker Andrew Kötting19 and the writer, Psychogeographer (and sometimes Urban Shaman) Ian Sinclair20 “ Celebrat[ing] the Waterbound Pilgrimage, ... ever alert to the traces of submerged histories; songs, civil protest, and the wilderness, through both the real and the imagined.” Kötting and Sinclair pedalled a swan-shaped pedalo from the seaside in Hastings to Hackney in East London, via the inland waterways.” 21 Related events include PERAMBULATIONS AND CONFABULATIONS, the writer and Mythographer Marina Warner in conversation with Ian Sinclair. Move over Serpentine – CGP are stepping up to the line.

10. The image of the painting the Raft of the Medusa (painted by the French artist Theodore Gericault 1818-19) was used as an cover by the folk punk band The Pogues for their 1985 album Rum Sodomy and the Lash – this title is attributed by some to Winston Churchill “Don’t talk to me about naval tradition it’s nothing but rum, sodomy and the lash.” The Pogues title perhaps better describes Cindy lashed to the upturned cups

12. Rachel House speaking to the author on 27th May 2012 in Southwark Park on the occasion of House’s CGP apathy’s a drag event. 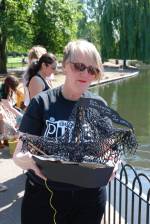