Based in south-east London, the artist-run Space Station Sixty-Five (SS65) has been co-directed by artists Jo David and Rachael House since 2002: “Our mission is to place new works of contemporary art in shop-front premises, [with] an open door policy.”1 House and David explain: “We foster a large audience … from a wide range of backgrounds … including a healthy local following as well as a wider contemporary art audience.”2

Although East Dulwich has changed over the past nine years, from a London village community where “children used to lead their parents through our doors,”3 to a more middle class area in which children seem to be discouraged from exploring. David and House manage to be “unswayed by fashion trends or the whims of government funding,” and continue to curate “contemporary art [they] love in accessible venues”.4

Independent and unfunded SS65 miraculously support exhibitions and initiatives by artists, from different stages in their practice, and it is to their credit that the current exhibition Misericord shows an established artist together with an emerging artist. Although Cathie Pilkington’s and Jay Cloth’s different practices evidence similar interests in subversive exploits, they flow from markedly contrasting points of reference, while the title Misericord (depending on how familiar the reader is with 15th to 18th-century terms), suggests numerous possibilities in reception of these works.5

At SS65’s Last Friday (in March) event, the artist Jay Cloth (so named since arriving in London from Manchester in 1992) wears sparkling blue nail polish and lipstick, with a prosthetic mask of his own face attached to long black hair fixed far back from his forehead. His black brogue shoes and harlequin dress match his cat pupil contact lenses. The lenses turn out of sync with each other, sometimes both reading 6 o’clock then as a chameleon changed to 9.15 with 7pm.6 This strange slippage contributes to the bizarre content of his deftly grafted erotic images. Yet the distortions, sometimes intricate, sometimes blunt, are arrived at through a strict code of play.

Cloth explains: “I’ll buy 14 books or magazines and choose an album to work to, Indy electronic.”7 Kate Bush’s Kite8and Rainbow Arabia9 are two of the musical scores that accompanied the making of his work for this exhibition. Cloth trained at Laban: “I would finish at Laban at 6, go out at 8 and dance in clubs (The Bell, The Fridge, Heaven) until 2 am.”10 Cloth “well-known as the doorman at ‘Duckie’ nightclub has worked extensively with David Hoyle (ex ‘the Divine David’) and Lea Anderson of the Cholmondeleys and the Featherstonehaughs.”11,12 As a draftsperson might understand the human form through hours of studying the naked figure, Cloth’s own physical experience informs his images, he realises the possibilities of the body and how far he can distort that reality, yet still remain convincing.13 Cloth’s fervent relish of sexual play echoes artist Cathie Pilkington’s delight in the hanky panky of life.

Pilkington’s sculptural practice plays with “a new figurative language”.14 From Disney to Goya through Eastern European and Cautionary tales, she references a rich source of imagery mixing different genres into strangely unsettling scenes: “… I like things that look familiar yet slip between.”15 For ten years “I was making hyper-realistic things … objects that stood alone”.16 The detailed modelling took time and Pilkington’s need to be intuitive impacted a change to the way she modelled form, yet still she will use that expertise when necessary. “It’s like I’ve got an arsenal of weapons to deploy.”17 Pilkington is showing works in Misericord that were earlier exhibited in her Peaceable Kingdom show at Marlborough Fine Art (December 2010–January 2011), and her mixing of methods can be seen in Help Is on its Way (2010). A young goat, its head finely modelled to focus our attention, is surrounded by loosely-rendered cartoon characters and a children’s horse gone nasty. Mother (2010) features “a goat lifted from a 1970’s Ladybird book18  … she’s mending something that’s broken … she has to make everything alright. My mother read these stories to me and I’m reading them to my daughter now, when your mother is reading to you, you stare so well”.19

Pilkington has an acutely informed eye, fed by a lifetime of staring well. The tired looking nanny goat in Mother sits on a floor of Formica patterned with a 1960s daisies on grass motif, sewing a “lambdogfrog” creature. Not quite horse, not exactly unstuffed four-legged person, Pilkington explains that this incomplete being has “re-emerged in my work” a number of times. In Snow White (2010) Pilkington plays around with Goya and Disney. “Watching the original film then watching it again with my daughter I saw how the animals moved round her [like a flock] because she’s this good thing.”20 Carrington21 is also there in the delicate Snow White figure with a mass of hair, and Aesop in the two goats standing on their back legs looking on. But it is the disturbingly nondescript large-headed beings, approaching cartoon, almost animal, that resonate the slip of near recognition Pilkington conjures so well. Inventing these “active narratives”, Pilkington retells old stories layering another haunting onto already unquiet tales. None so well as Levitating Doll (2010), where Hollywood horror meets a little girl’s rag doll hovering off a table top in a manner that will definitely never be made alright on any night. Pilkington explains: “I’ve always been interested in the uncanny of dolls – I went to the Exorcist when I was 13 and then the Pentecostal Church; it was terrifying they spoke in tongues.”22 Pilkington engages us in such strange fancies; we are intrigued into her web of nearly familiar tales, and the more we look the more she surprises us.

This Misercord will lurk in your thoughts for some time after viewing, a rare pleasure in today’s rush of fast culture servings. Go and be tripped up on this unsafe singing ringing tree,23 and relish the haunting if you dare.

3. Davis and House in conversation with the author at Space Station Sixty-Five’s Last Friday, 25 March 2011.

5. Misericord 1. Compassion, pity. 2. A relaxation of a monastic rule. 3. A shelf in choir stalls to support someone standing. 4. A dagger with which the coup de grace was given. Hence Misericordious compassionate merciful. Entries from The Shorter Oxford English Dictionary, 1933.

19. In conversation with Pilkington at SS65

22. In conversation with Pilkington at SS65 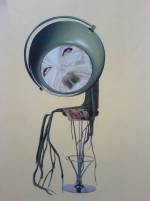 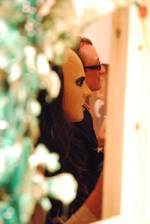 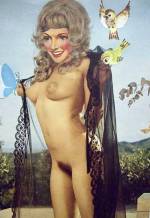 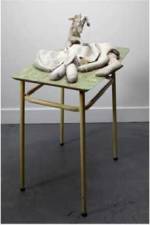