With the latest trend of fashion houses stamping their presence in Japan by engaging architects to design their flagship building along the trendy Omotesando in Tokyo, Dior is no exception as well. Fifty years after the first Christian Dior fashion show in Japan, Dior opened a large general boutique, 'Dior Omotesando', housing its various merchandise lines. This is Dior's first boutique in the world that is created right from the planning stage.

Designed by experimental Japanese architect duo Kazuyo Sejima and Ryue Nishizawa, known collectively as SANAA, the building is a pristine white box with sharp edges and occupies the entire trapezoidal site. Couture dress, the ultimate beauty in fashion, is the main source of inspiration for this new creation. Standing at 30 m tall, it seems to be like an eight-storey high building with a dramatic double-skin façade of transparent flat glass on the outside and softly curved, white translucent acrylic panels on the inside, reminiscent of the drape of a dress. White stripes are printed on the acrylic walls so that the building's appearance changes beautifully depending on the light during the day and the level of penetration of lighting at night. A few white horizontal aluminium bands further break the continuous volume into several unequal segments. This slender white box speaks of an elegant femininity that enables it to stand out effortlessly along the star-studded street. Not revealing entirely what is behind the white drapes, it exudes an air of mystery that invites one to step into the luxury world of Dior and explore.

Internally, a different world awaits revelation. Instead of the eight floors of boutique space perceived earlier from the street, there is only one basement floor and five above-ground levels. The basement and the first three floors are devoted to the various retail lines under the Dior umbrella; there is one multi-purpose event space on the fourth floor and a rooftop garden above. The reason for this apparent misrepresentation of floors is the enlargement of mechanical space from the minimum requirement of 1.5 m to greater heights that befit the overall façade composition. Instead of hiding them, SANNA expressed and skilfully incorporated them to create a slender volume that built right to the maximum allowable height. The legibility of spaces is aided by the varying degree of transparency whereby the mechanical spaces are the most opaque.

Designed by Dior's own in-house designers, each retail line has its own design vocabulary and distinctive ambience. The first and second floor is devoted to ladies' prÈt-a-porter and accessories. The interior design is produced by collaboration of Peter Marino and Architecture & Associés (Pierre Beucler and Jean Christophe Poggioli), with the same classic concept of the main boutique located in Avenue Montene, Paris. Molded ceilings, parquet floors, wood panelling, pure romance and tradition that are in sharp contrast to the external modern glazed walls. The third floor is devoted to the beauty world with the concept theme of Backstage. It is here that customers can experience the presence of runway and backstage of Dior fashion show, wearing the newest mode in make-up, nail and skincare, in a modern and up-to-date atmosphere. The stair core that links the various floors has glass tower that stands from the basement to the roof, housing mirror-finished stainless steel and backlit display shelves within.

Another memorable interior ambience is the Dior Homme store, located at the underground level. Conceived by Hedi Slimane, Creative Director of Menswear, a vocabulary of materials inherent to the universe of Dior Homme is used but with a design specific to Omotesando: white lacquer, black lacquer plissé, polished metal, black stone floor, strip lighting, an artist's fitting room by Carsten Höller, and the incorporation of the signature red light. These elements are based on a tradition of Dior but have been reinterpreted and transposed into a modern context. Geometric arches punctuate the centre of the space. When a visitor is seated within one of structures, a red light is activated with directional sound. Polished metal is used in series, defining the space with a reflective surface. The Dior plissé appears as an architectural aspect of black lacquer rhythmic bands. Light is used as a graphic element within the floor, sides, and ceiling. On the other hand, the artist Carsten Höller uses the fitting room to explore the notion of time and self-perception. In the place of a traditional fitting mirror, there is a projection surface where images of the person within the space appear in photographic partitions. These images change systematically, presenting different angles of the individual in a series of still frames. It is a place of interaction and imagistic investigation.

The interior of the building might be eclectic, but the thermoformed acrylic drapes manages to manifest a coherent image that symbolises Dior's femininity and arouses one's imagination at the same time. When looking towards the cityscape from inside, one seems to be in a fairyland engulfed by this cloud of fuzzy whiteness. 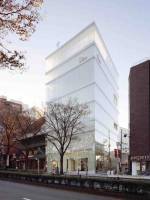 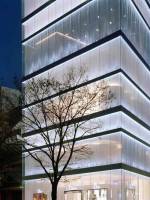