David Hartt: In the forest

David Hartt: In the forest

In his filmic and photographic portraits of architect Moshe Safdie’s abandoned 1968 housing project Habitat Puerto Rico, David Hartt explores the relationship between site, ideology and environment, at a poignant moment for a country currently struggling with environmental and economic disaster 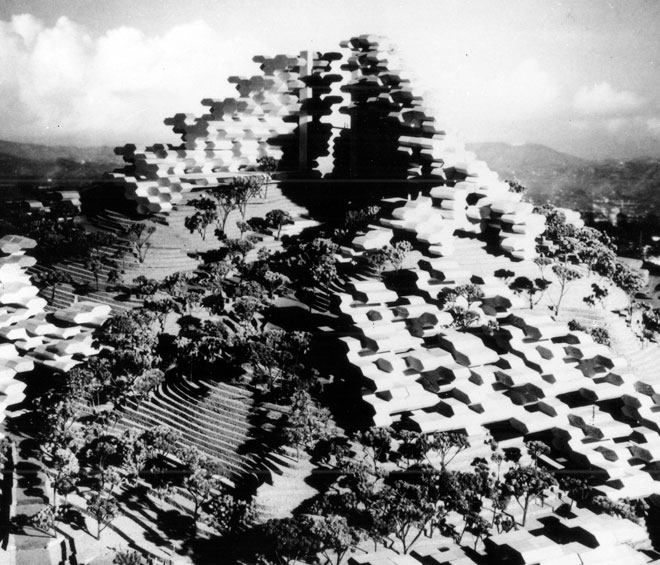 There is an eerie quiet in the heart of the Bosque Urbano de San Patricio in San Juan, Puerto Rico, where remnants of a utopian concrete housing project are now coated with a soft skin of moss and buried by tough roots sprouting motley flora. The prefabricated modules of architect Moshe Safdie’s unrealised Habitat Puerto Rico project of 1968 have been documented with film and photography by artist David Hartt for a new commission for the Graham Foundation in Chicago. In the 60s, the site was used for US Navy housing. It was then designated for the Habitat Puerto Rico project, but the land was abandoned in the 70s after the project failed, and the site is now overgrown. 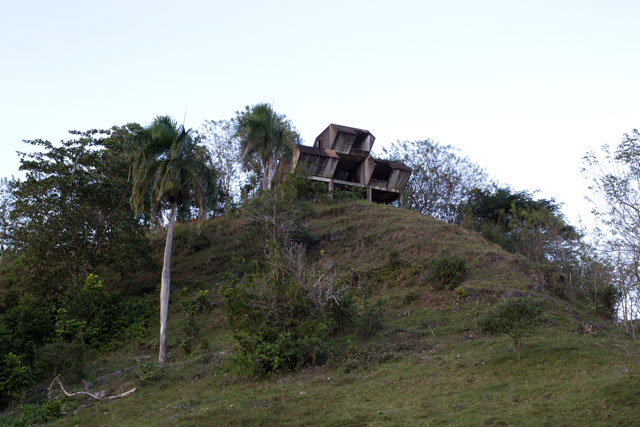 Halfway between a study and a portrait, the long, still shots in Hartt’s film are accompanied by a melancholic composition from electronic musician Karl Fousek. The resulting work is an open-ended cinematic meditation on history, nature and civilisation. The subject matter of the film intensified in the week the exhibition opened, when Puerto Rico was devastated by Hurricane Maria, which came on top of its already increasing economic problems. The eeriness of these abandoned concrete forms is all the more poignant now that thousands of people have been left homeless following this environmental disaster. 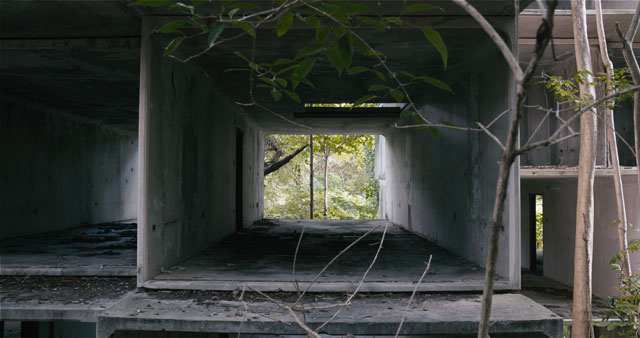 Hartt’s investigation was sparked by the 50th anniversary of Safdie’s Habitat 67 in Montreal. Habitat 67 was Safdie’s thesis project, which explored the possibility of bringing community, nature and privacy into residential urban life on a mass scale. Although the project was completed and has become iconic, higher than anticipated costs meant the apartments were expensive and became unaffordable for those for whom Safdie had intended them. It was on his original model for low-cost housing that the architect based similar Habitat complexes for Puerto Rico, New York, Israel, Singapore and other cities. 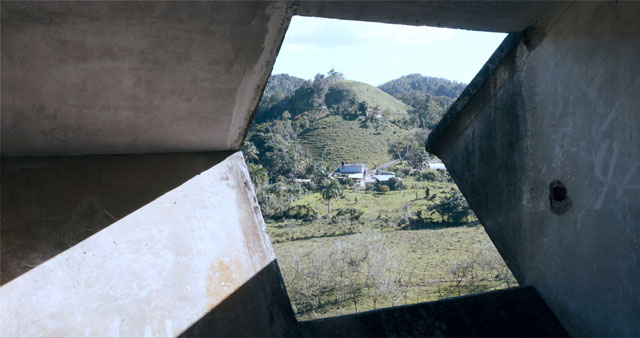 “I was really interested in a dialectic between one future in Montreal 50 years later – luxury housing and a queer landmark – and in Puerto Rico, a very different situation, context and future that arose from the site,” says Hartt. The Graham Foundation commission gave him the opportunity to “dig in”. Hartt began his research using Google Maps to discover the location of the vantage points of archive photography of the site, and then visited the Moshe Safdie Archive at McGill University in Montreal before travelling to Puerto Rico. 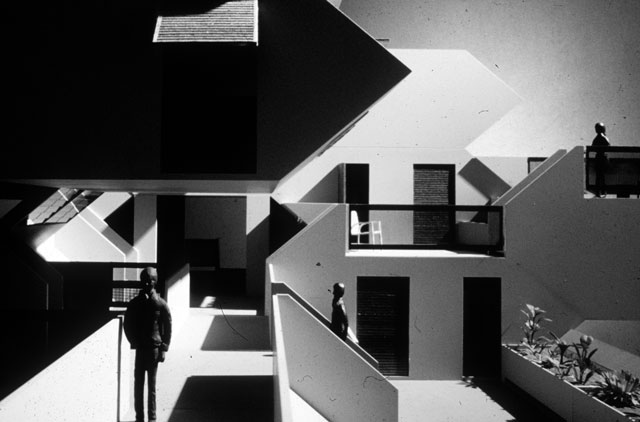 In Puerto Rico, the Habitat project aimed to provide 800 prefabricated concrete units, yet only 30 were ever produced because of the withdrawal of financial backing from the Puerto Rican government. Hartt’s film focuses on the abandoned units, left in the landscape, where the wilderness is slowly claiming them, while one has been repurposed as a cow shed. 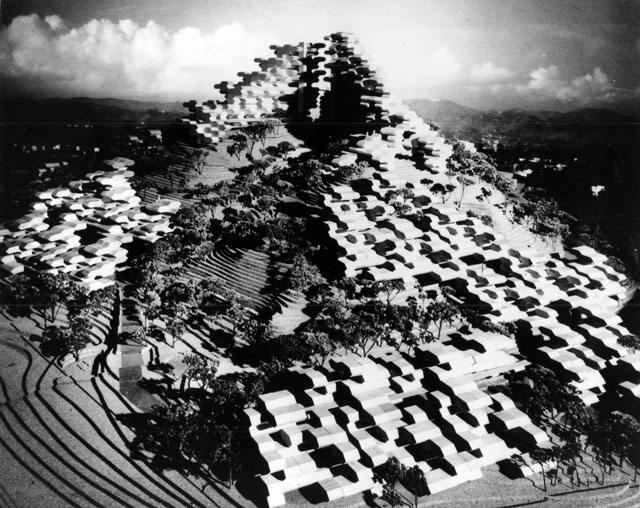 “What’s interesting is not only the response to the failed utopia, but really using Safdie’s project as evidence by which to examine the contemporary context of Puerto Rico, looking its status as colonial state, the debt crisis, the failures of new liberalism. For me its an amplifier, it’s a way through by which I can begin to explore these ideas,” says Hartt. 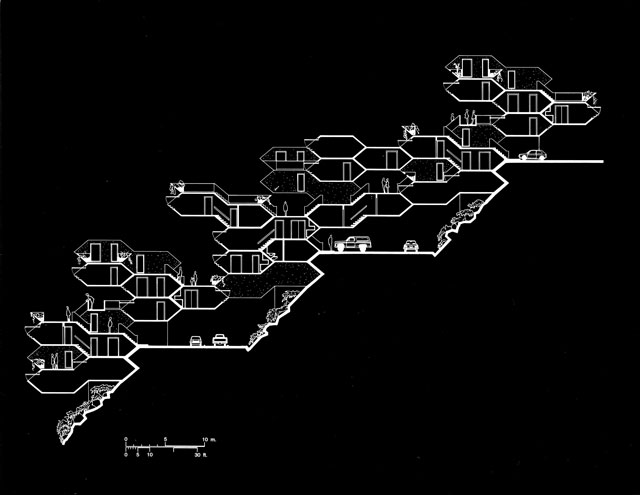 Seven photographs of the architectural remains accompany the film, as well as aluminium sculptures shaped to the roofline of Safdie’s units, and modular ceramic objects that have a dual function as pots growing native Puerto Rican plants and as stools. Set in the Graham Foundation’s Madlener House, a historic Prairie-style house with wooden-panelled interiors and stained-glass windows with deep recesses, the exhibition, unlike its subject matter, seems staged and carefully controlled. 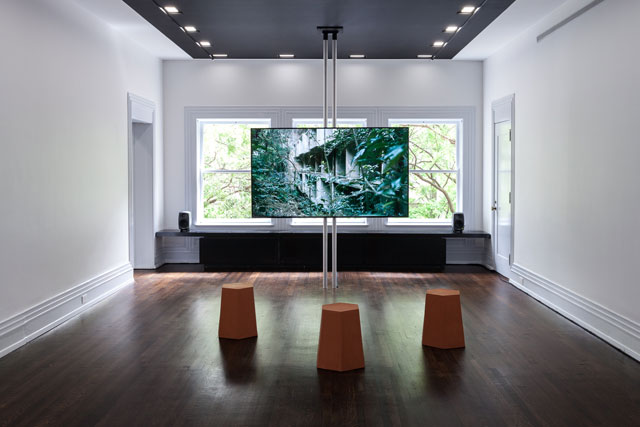 While the focus of the Graham Foundation, which was founded in 1956 using a bequest from Chicago architect Ernest R Graham (1866-1936), is the development of architecture, its grant-giving activity encompasses all sections of culture, especially contemporary art. “For us, the focus is architecture, but the discipline is not always architecture,” says Sarah Herda, director at the Graham Foundation. “I truly believe that not all important things about architecture are done or said or thought by architects. I’ve known David Hartt’s work for a long time and I think his work really delves into the relationship between architecture, ideology and environment.” 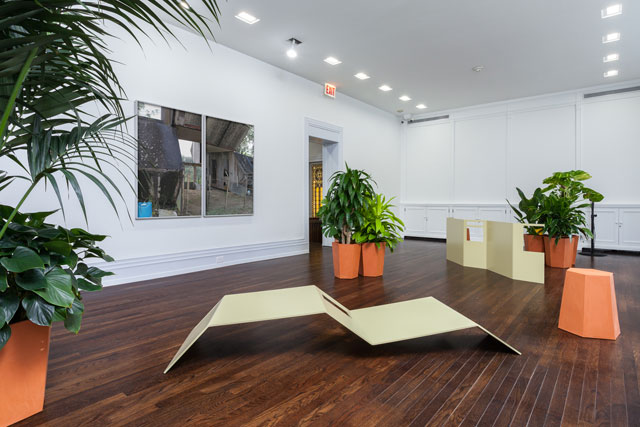 Using his documentation as a starting point, the format of the exhibition is a frame, within which Hartt adds multiple, often invisible, layers. The title of the exhibition, In the Forest, is borrowed from a chapter of Claude Lévi-Strauss’s 1955 travelogue Tristes Tropiques, a memoir of the anthropologist’s travels. The year 1967, the same year that Safdie’s Habitat 67 in Montreal was devised, was also the year Hartt was born, in Montreal. Hartt, who is mixed race, was adopted by two white Jewish academics. He says all his work is biographical in how it always examines the relationship between locale, context and culture, relating this to his experience of being adopted.

Even having the exhibition in Chicago, where many urban experiments of the 19th century played out – the skyscraper, the raised pedestrian walkways, the “L” train – feels relevant. And the city has parallel biographical meaning for Hartt, as he studied for his MFA at the School of the Art Institute of Chicago in 1994. He returned to the city in 2011 to show his work Stray Light at the Museum of Contemporary Art. This was a film portrait of the headquarters of the Johnson Publishing Company, for which he took a series of photographs of office life – muted, corporate portraits of peeling posters, desk lamps, a family of ornamental sculptures, non-descript glass trophies, a geometrically patterned carpet – with the same sensitive attention to place and context that he employed in Puerto Rico. 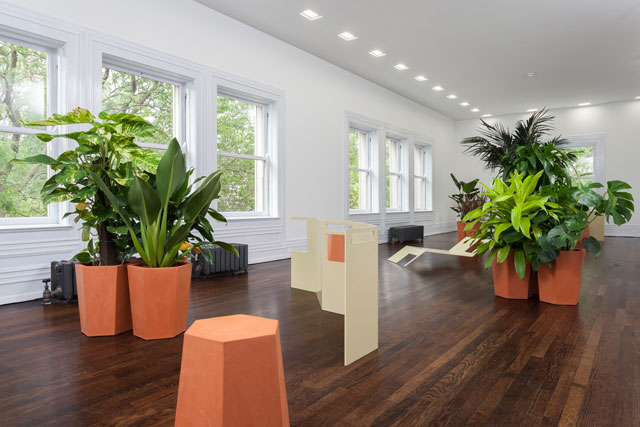 Hartt described his methodology in a talk at the Art Institute of Chicago in 2015,1 reading some lines he had scrawled in his notebook in 2005: “Develop a system of image-making threaded by twin impulses: one, the romantic tradition of picturing the world; the other an examination of forces affecting that world.” It was at that time, too, that he defined the subject matter he was interested in exploring: including the pavilion, the folly, the hermitage, the station, the classroom, the library, the platform, the refugee camp, the garden city, the thinktank, the foundation. Safdie’s abandoned modules, like the structures in Hartt’s 2005 list, are semi-public, semi-private, manmade structures. They are hybrid vehicles, specific to their own context, through which Hartt examines a complex site.

Across his body of work, his interest in humanity and his anthropological approach is constant. In the work Interval (2015), Hartt selected two economically and geographically isolated locations, Whitehorse in the Canadian Yukon and Sakhalin Island, a Russian territory in the Japanese archipelago, choosing each site because of literary references. Like the work in the forest, Interval examines ideologies that are tied to the context in which they exist.

Hartt’s conclusions may not be immediately apparent to the viewer, yet each layer of inquiry leaves a residue that, with time and contemplation, can be slowly translated. His work unravels and distills into a beautifully cinematic portrait that calls for a reconsideration of, and a meditation on, a site that is ultimately timeless in its quality.